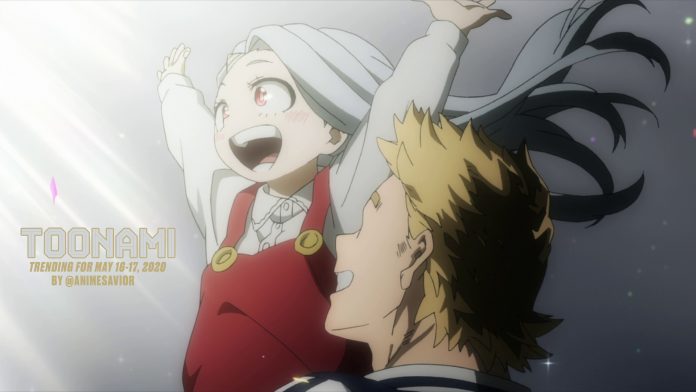 “Are you seeing this? Midoriya, Sir, look at her. She’s smiling!”

The Toonami Trending Rundown for May 16-17, 2020. After a delay related to the COVID-19 pandemic, fans got to see the finale of My Hero Academia ‘s U.A. School Festival arc.

Among some of the highlights of the night, My Hero Academia saw Gentle Criminal and La Brava being taken into custody for their attempt to break into U.A. Before being taken away, Gentle tells Deku that he used to be an aspiring hero and student in the academy before turning into a villain after dropping out. He hoped that Deku could do what he couldn’t in being able to save and inspire others. Despite needing to be questioned by Hound Dog for what had happened, Deku would arrive in time for the U.A. School Festival, as Jiro led Class 1-A with a passionate musical performance. The performance and festivities helped Eri free herself from the curse Overhaul put upon her as she was seen smiling for the first time. Meanwhile, Black Clover saw Finral and Nero retrieve the magic stones used to begin the Elves’ invasion. The two then placed them in the statue of Lemiel, the first Wizard King, to bring the former king back to life. Doing this also revealed Nero’s true form, a female human named Secre, who is a servant of Lemiel. Both of them were previously alive when the elves and the humans tried to get along. And JoJo’s Bizarre Adventure saw the crew arrive at Sardinia, Italy, as we are introduced to Vinegar Doppio, an agent for the boss who has been given powers by King Crimson, but also under the boss’ control.

On Twitter, #Toonami would successfully trend in the United States alongside Paranoia Agent. Meanwhile, on Tumblr, #Toonami would trend alongside My Hero Academia and JoJo’s Bizarre Adventure. The full list, including statistics and tweet counts from the Twitter app and Amr Rahmy’s Fan Screening analytics app, can be seen below.

According to Aniplex producer Shoki Niwa (first reported by Anime News Network), the final cour of Sword Art Online: Alicization is still planned for July after being pushed back from its original premiere date in April. While production crews have been working on the show from home, Niwa mentioned that the process is difficult to do, considering the amount of the production work outside of the studio is needed to be done. Which of course, includes the cast currently unable to go to a studio for their voice-over sessions.

Although Toonami is nearing the end of My Hero Academia’s fourth season (just two episodes), the next three weeks will see episodes 84-86 rerunning on its current timeslot due to the COVID-19 pandemic. Both Funimation and Toonami are doing what they can to bring fans content during these tough times, but with stay-at-home orders likely to persist longer, all fans can do at this point is to have patience.

Until next week, stay safe and gold as always. And of course, make sure you do your part to stop the spread of COVID-19 and to protect others by following your local health advisories. Practice social distancing by staying home unless you have to leave, wear a mask, avoid large crowds if you do go out, and wash your hands thoroughly for at least 20 seconds. 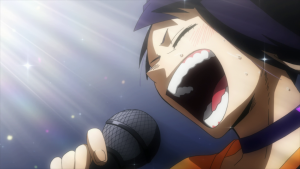