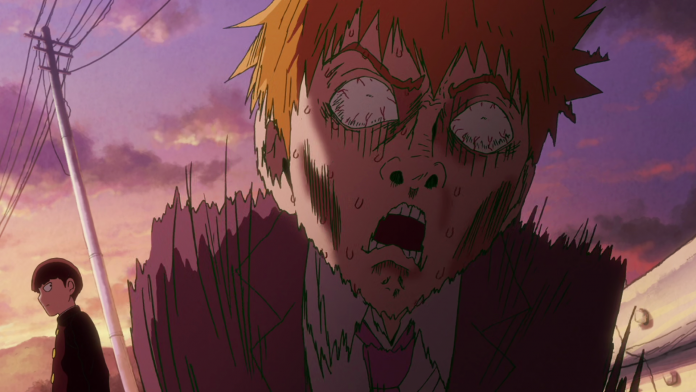 If there’s one thing that I enjoy about anime, it’s seeing complex characters garner a lot of attention for the things they do or don’t do. I love how it can invoke an emotional response from fans and then have that character grow, making the anime more memorable and enjoyable. Much like the previous character article I wrote about Katsuki Bakugo, I find his growth and journey to be one of the most exciting side stories in My Hero Academia since he began as an antagonist and bully toward Deku. This type of transformation or development has always been a massive factor in what makes anime/manga properties fun to consume.

But as the title suggests, this isn’t another piece about Bakugo. We are here to discuss quite possibly the most interesting character I’ve seen written in Reigen Arataka from Mob Psycho 100. The mentor of Shigeo Kageyama (Mob) and one of the biggest con artists in this world, Reigen is nothing more than another obstacle for Mob to overcome in his journey to figure out who he wants to be and what makes him unique. Yet as fans watched the first season unwind, many of the stand-up core values Mob cherished came from Reigen. And it continues to blow my mind how such a weaselly character can instill such fantastic advice that actually moves me. And considering how the “meme” exploring whether Mob Psycho 100’s second season will join Toonami, I felt it’d be fun to re-explore a topic that astonished me when I first experienced the series. And who knows, maybe this can help create that spark to have fans request the next season anew.

For those who aren’t aware of who Reigen is, in the world of Mob Psycho 100 he is the self-proclaimed greatest psychic. He has a business helping individuals who are having problems with the spiritual world. So he’ll exorcise (or, as he says, exercise) spirits, allow spirits to possess him, and expel curses from clients. However, it’s rather apparent in the first episode that Reigen hasn’t a clue what he’s doing and is trying to keep the facade up that he’s a psychic in order to earn a lot of money. This is where Mob comes in; he asks to be his apprentice in order to learn how to live in a society with his powers and be successful like Reigen. Reigen, realizing how powerful and capable Mob is, uses him (in a predatory sort of way, at least that’s how I interpreted it at the start) to help keep the charade going and earn a lot more money.

I know what you’re probably thinking. Reigen is a con artist, stealing money from his clients, and uses Mob to get famous. Not to mention he barely pays Mob and continues to call him at a moment’s notice. It seems rather sleazy and something that Mob’s younger brother Ritsu noticed when the two sides ran into each other in the anime. And I would agree with you if it just ended there. But something that ONE seems to do exceptionally well at is building characters. Much like how I felt about King in One-Punch Man, ONE seems to know how to craft complex characters that tug at your heart and become as complicated as actual people seem to be. It astonishes me, and the evidence is no more obvious than when looking at Reigen.

That’s a long-drawn-out way to say that I love Reigen and find watching him in Mob Psycho 100 to be most fascinating. For someone who is disgustingly underhanded, he helps shape Mob’s values in the same way that inspirational figureheads do. Due to Mob’s incredible power, it’d be easy for him or anyone to abuse them. Having psychic powers to control and fight enemies can easily warp your mind into thinking that you are superior to humanity and might even begin to have delusions of being a god (i.e., Teruki Hanazawa). Many would fall down the path Teruki took and start using their powers (if strong enough) to get the finer things in life. Seeing Mob and Teruki fight was such a poignant way of showing the clash of ideals. Should those with tremendous power use it to broadcast how special they are, like Teruki was doing? Or should you do the exact opposite, like Mob was? Of course, after the battle, Mob subconsciously used his dangerous powers and destroyed everything, causing enormous strife within himself, and feeling he let Reigen down. And some might wonder why, mostly since this was a case where Mob was defending himself. Unlike how most every other person feels, Mob doesn’t believe that having psychic powers makes you unique, just more dangerous. Which, oddly enough, was the message Reigen instilled upon him.

The analogy of a weapon comes up a lot when looking at the dangers of psychic powers. After Mob had an incident where he hurt people with them, the warnings and advice Reigen taught Mob resonated with him. Psychic powers used haphazardly are dangerous, and those with these gifts must be cautious about using them. Very powerful indeed, and this is basically the whole “with great power comes great responsibility” speech, just in a different way. Mob understands the dangers of destructive powers at a young age, and thanks to that, he doesn’t abuse them. He won’t go around taking down those who wrong him, realizing that eventually, he might kill someone if he keeps using these weapons.

And it doesn’t stop there when it comes to the core values Reigen has taught Mob (and maybe even viewers). Reigen, surprisingly, seems to be a man who believes that everyone is equal. I say surprisingly only because of his actions as a con artist. Typically, those who partake in that line of work are complete narcissists and do whatever they can to be on top, because they believe they are superior. And while Reigen puts up an excellent front to clients, you can tell he considers himself no different than anyone else, particularly in how he interacts with Mob. Reigen doesn’t believe that having psychic powers makes anyone superior, just different. And you can equate psychic abilities to other traits that others might demean, like race, orientation, religious background, etc. No one thing is better or worse than the other, and Reigen embodies that belief, especially with how he acted when he gained a tremendous amount of power at the end of season one.

It looks as if these conversations about equality affected Mob. He would instead try to improve his body physically and without powers, because it would defeat the purpose of bettering himself. And Mob doesn’t feel superior to anyone throughout season one, just different. And while that difference has caused him nothing but grief and forced him to cocoon his emotions, he understands the dangers much better than most adults.

But what hits home about how great of a mentor Reigen is to Mob is that he listens to the kid’s problems. He doesn’t belittle or push Mob away if he’s showing signs of anxiety or stress. And sure, some might argue he’s only doing that to keep the cash cow going. But in the small interactions that the two have, Reigen seems to know what Mob is thinking or feeling. Reigen seems to treasure Mob more than what his business would require, which makes me believe he cares deeply toward Mob. There have been instances where Reigen helps Mob’s with problems that don’t help him in the slightest, and the encouragement Reigen gives our young hero is invaluable. Much like how I would praise Koro-sensi for helping his students, Reigen is very close to that side of the spectrum when it comes to mentors.

And so here we are. A character who takes advantage of the public with his spiritual practices has become a favorite of mine. Because when the chips are down, we see what Reigen can become. He has been a great mentor for Mob and helps him with many problems for which kids need guidance. He’s allowed to give Mob a sense of meaning and feels like he finally has a friend. But more importantly, the core values that have shaped Mob, which I’m sure many find heroic or praiseworthy, all came from Reigen (as crazy as that sounds). Thanks to Reigen, Mob was more self-aware about the dangers of his powers, rather than abusing them to mold the world into his liking as many other espers have done. Mob (who has the power to be a god) has decided to keep his powers hidden and rarely uses them to help him become popular. He believes that using his powers at a moment’s notice is no different from running with scissors. And we all know the dangers of doing that.