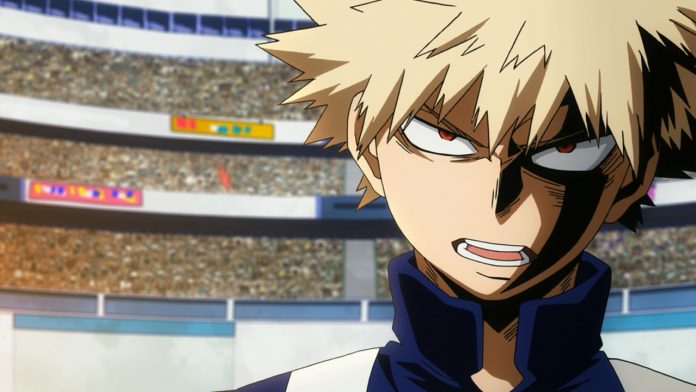 *This article contains spoilers of episode 61 of My Hero Academia. You have been warned.*

It’s a debate that I enjoy seeing from time to time. “Why is Bakugo popular amongst the fans?” That can be a loaded question, due to all of the reasons you could think of. We can talk about his costume design, his neatness quirk, the funny moments he has with his classmates. But you could also cite many examples of why he shouldn’t be a hero that some people idolize. I think the reason he has become a fan favorite is because of the character growth Bakugo goes through. He starts as a narcissistic bully to Deku but turns into a sympathetic and wildly entertaining character in the span of three seasons. Kōhei Horikoshi has been given credit for how well he writes characters like Deku, All Might, and Todoroki. But I think the development of Bakugo might be his greatest achievement, making him one of the most compelling characters in shōnen. Which makes me glad that Toonami fans get to see this kind of growth.

When we are first introduced to Bakugo, he’s an apparent foil to Deku. He was the gifted youngster who was on the fast track to becoming a great pro-hero. He was told at a young age how amazing he was, which messed with his head, making him believe that he could challenge All Might as the greatest hero (and no one else could touch him). This feeling of superiority gave him a false sense of invinciblity, and that everyone should follow his lead. An incident when he trips and Deku (being the good person that he is) tries to help him up causes him to have a deep-seated aggression against the series lead character. It was at this moment that Bakugo feels weak/helpless for the first time. And of all the people who would see this, it was Deku, a young kid who could never become the hero All Might is. To Bakugo, it felt like Deku was looking down on him, pitying him when it isn’t necessary. Sadly, Bakugo couldn’t get it through his head that Izuku was in awe of his prowess and wanted to be his friend. Instead, during the first season, we watch as Bakugo’s resentment grows bigger and bigger, giving off a vibe that he will snap and end up doing something that would cause him to become a villain — going so far as to tell our young hero to kill himself at the beginning of the series.

Usually, that would be the end of any conversation about Bakugo. He was a bully and committed a lot of atrocities, such as beating Izuku to a bloody mess as well as torturing the kid at every turn. He was angry, and that anger would show up time and time again, not only toward Deku but to his classmates as well. His constant anger made some guess that this particular character trait would become annoying as well as causing his downfall. And yet, he’s climbed up the ranks of popularity, because despite My Hero Academia being the story of how Deku becomes the number one hero in the world, we also get to watch as Bakugo grows and portrays things I wasn’t expecting to see in a shōnen anime.

As soon as Bakugo is enrolled in U.A. High School, he’s immediately put in his place. Back when he was in middle school, he was a big fish in a small pond. Of course he looks amazing. Now he’s at the most illustrious hero school in the world and quickly realizes that no one is going to back down from him or shower him with compliments because everyone in his class is just as amazing as him. It’s similar to how athletes strive to become professionals. Those that excel at one level of play (middle school, high school, college) might not break through in the next level. Rookies at the professional level learn quickly that everyone in the league was the best athlete at their school and dominated every level of play to make it that far. Success doesn’t come easy, and sometimes that can break people. Bakugo offers the cautionary tale of what might happen if someone is too prideful and doesn’t realize that everyone else is just as amazing. And while it takes him a while, I think he starts to see that throughout these seasons of My Hero Academia.

BEST OF BAKUGO TURN YOUR VOLUME ALL THE WAY UP FOR MAXIMUM EXPERIENCE pic.twitter.com/VbRRqj8cvT

His confession to Deku became the biggest indicator of his growth. Previously Bakugo wouldn’t even talk to Deku or give him the time of day. He didn’t value any of his classmates as he was dominating them and felt as if becoming a top-tier hero would be easy. He eventually realizes that everyone is astounding and that he has to continue to train and fight to reach his goal to be the best. So instead of being lazy or falling into his narcissistic trap (resting on his already fantastic abilities), he continues to get stronger. And his declaration to Deku of how he plans to crush him takes a different tone, not that of bullying, but that of equal footing with one trying to “one-up” the other, almost as if the two are friends.

And despite how amazing he or others think he is, Bakugo is just as weak and fragile as any of us. He continually gets captured, which hurts his pride. Deku’s first adversary (the slime-monster) captures Bakugo and nearly kills him. That face Deku makes whenever Bakugo encounters a pitfall drives him insane and makes the explosive hero even angrier. So much so that when the League of Villains captures him, Deku is told to stay away. He doesn’t want to feel weak again, not in front of one of his biggest rivals. And with Deku continually making progress (faster than him) and the fact that was captured only adds to his stress. The League of Villains targeted him due to his aggressive and villain like behavior that was on display during the sports festival. And it’s because of his aggressive nature (and quirk) that helped drives his popularity up.

He’s a new age Wolverine (who was insanely popular when he first hit the pop culture scene). People loved the anti-hero archetype since it was rarely used in the past, and Bakugo fits that mold beautifully. The old saying, that people like the bad boys—well, Bakugo certainly exhibits that type of vibe and continues to demonstrate it throughout My Hero Academia. He doesn’t fit the cookie-cutter mold that you get with heroes like Superman, instead he’s more relatable and personally more fun to watch.

Despite being viewed as someone who could cross to the dark side, he hasn’t yet. He never loses sight of what line he has to stay on to become the hero he wants to be. Even I think it’s clear the Bakugo would be easy to manipulate to become evil, yet his resolve never wavers. His confidence and narcissism built him to be this kind of person. His past of terrifying his classmates has become a reliable resource to stay on the path of becoming a hero. It’s been proven time and time again that even in the face of terrifying villains, he’ll spit in their face. I find that to be just as inspiring as the message that Deku and All Might represent. Surprisingly, his defiance in the face of Armageddon can be just as inspiring as a more noble-sounding cause. And that’s what makes My Hero Academia amazing. Every hero can find a way to inspire even the class’ angriest bully.

But it’s fascinating at how All Might has inspired and driven Bakugo to be who he is. You’d think that symbol of peace would encourage everyone to be like himself, (or how Deku handles himself). But Bakugo is just as enamored with All Might as Deku. We see in a flashback that he wants to be able to win like his hero. All Might, no matter what the odds, always comes out on top. You could have a fair one-on-one fight or have 100 guys ready to strike; it doesn’t matter. Bakugo is astonished and hopes to become strong enough to do the same thing. He wants to create peace by fending off as many people as he can. That still counts as being heroic, but I think because of how Bakugo handles himself, the noble aspect of his dream gets lost in translation.

And to add the cherry on top, we get to see a weaker side of Bakugo throughout My Hero Academia. It isn’t just him eating crow and staying angry. He channels that energy to become stronger despite how miserable he feels. Look no further than when he fights Deku a second time after the battle with One for All (episode 61). Bakugo believes he’s the reason All Might had to retire because he was too weak to help out when he was captured. He hampered All Might in his fight, and it’s shaken him, visibly so. It sends a message that even those who are amazing can fall, both at All Might’s level (professional) or Bakugo’s level (amateur). It would have been nice for Bakugo to realize that this feeling isn’t a bad thing, but these types of character traits don’t change overnight. It was a touching moment to see Bakugo admit that he isn’t as strong as he needs to be. My Hero Academia shows that he’s growing and learning to be a better hero in his own way.

I get the jokes about Bakugo always being angry about something. People get annoyed at the fact that he always seems to be abrasive when others help him. He’s prideful, and as My Hero Academia continues, we watch how he develops as a true hero. I believe that Bakugo’s growth from a narcissistic bully (that could very well be a horrific villain) to an ally is incredible for Deku. Toxic masculinity meets anti-hero, and seeing how he comes to terms with his weakness and faults is fascinating, because typically people who act like this never self-reflect or try to be better. I want to follow his journey more than Deku’s who is mostly one-dimensional. Sure, Izuku inspires many who were told they couldn’t do it (a great message), but being able to handle one’s own weakness is just as, if not more, important. We all fail, and that’s okay. It’s how you pick yourself back up that’s important. And if you can do that with the confidence Bakugo has, then you become even stronger than you once were.