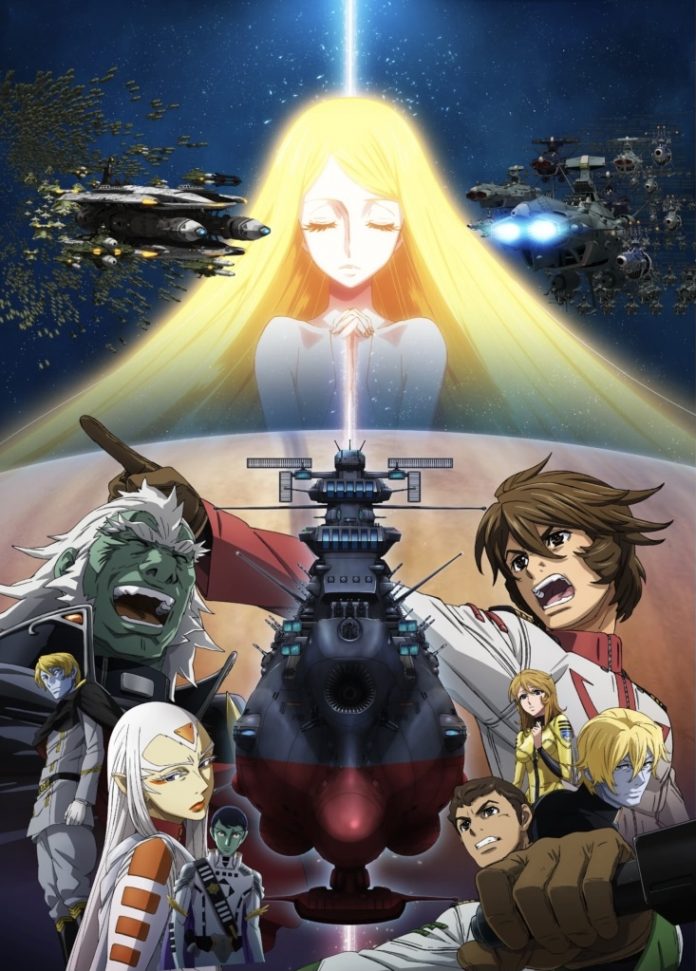 The story of Star Blazers: Battle Ship Yamato 2202 (Star Blazers) has reached its finale. Fans who have gone on the journey of saving the Earth with Susumu Kodai and the entire Yamato crew will get a fantastic feeling of closure after what some would call an exciting ride. Typically, I prefer a more action-packed space opera series, which I was used to with Cowboy Bebop and Outlaw Star. Yet, I found something beautiful in watching Star Blazers’ more controlled and tense conflicts that left me feeling content. I enjoyed this series immensely and feel strongly that if you enjoyed Star Wars or Star Trek, then this series is right up your alley.

Usually, I watch part two of a release right after seeing the first part to help keep the continuity in my head as to what is going on or where the story went after the first part. However, this time I didn’t do that, as I thought it’d be a great test to see how well fans could jump in at any point (since I feel this series would be great for Toonami). Sadly, not doing that severely punished me:  I didn’t get all of the little nuances that Star Blazers is known to have. I understood the main plot points of Earth stopping the Gatlantian fleet from taking over the planet and that it was up the those aboard the Yamato to stop it. But this series benefits from binge-watching, or at least stringing them all together without watching other series to distract you from the story.

Instead of writing out paragraphs to explain the main story points and plot, I felt it’d be better to bullet point the key moments through this second release.

Those were just what I found to be the most exciting and essential parts of this release. But the beauty of Star Blazers is all the little nuances and side stories that litter this series. I find it enjoyable to see and bring a level of importance with each character introduced. I never feel as if anyone is a throwaway character. This level of development, in turn, shows the importance of our central figures’ motivations in their quest to save their planets.

Fans see the conflict between these three races of life forms (Gatlantian, Gamillians, and humans), all looking for survival in the best way possible. When you get down to it, each group was only trying to do what was best for them. Now that isn’t to say that genocide or war is a good thing, but it’s the same type of stuff you’ll see argued in the political spectrum today. Should a country focus more on surviving through the means of military might? Or can there be coexistence for the different ideologies out there? And it was crazy seeing this all play out when Dessler returned to the spotlight fighting the Yamato once more, as well as learning about Gamillia’s history and their mission for survival.

But this became a massive question for the human race, considering their use of the time vault (where the military would build fleets of destruction despite the warnings given to them in the previous series). Throughout the four years from 2199, humans seemed bound to make the same mistake Gamillas and Gatlantia made. And we see just how close that came to happening when fans are taken aboard the Ginga fleet, where most of the crew were ready to give their lives for the advancement of a more robust military. Yet, the human emotions (like love) ultimately won out, which helped save the universe.

We even see how similar each race is throughout this series, especially when the concept of love was brought up as a central theme. You see the romantic commitment that Kodai and Yuki Mori share, and how they believe that love for life is a good thing. Whereas if you went to the Gatlantian leader or Decilliar, they might argue that it was love that ruined their mission for sustaining life. It drove them mad, and they felt that the ends justified the means of finding a way for survival. It was poignant, and seeing how the Goddess Teresa could have influenced their belief was fascinating as well.

I was incredibly impressed at the tense moments that flooded Star Blazers this season, as it gave a feeling of dread I’m not used to seeing. I’m used to more fast-paced action that makes me wonder who will come out on top, which leaves a scary feeling in my stomach if done right. In Star Blazers, the fact that it felt like nothing was happening, yet everything was happening, gave me a feeling of dread that almost felt like helplessness. I didn’t think drama-like would be as compelling, but it kept me glued to my seat. Was Kato going to betray the Yamato to save his child? What about Klaus Keyman’s betrayal toward the Yamato? Or the ultimate goal of the prisoner Toko Katsuragi? Everything took a while to develop, but the build-up paid off superbly. It was agonizing watching Saki Todo go against orders (and possible robotic advancement for humans) and not only use a weapon that didn’t guarantee success but shoot down the analyzer specifically kept to ensure that the human race survives. It was all these moments that help make this series special.

But what wasn’t lost on me was how spectacular the series looked from beginning to end. Not only did I enjoy the character art, but the space shots for ships, planets, and explosions all looked beautiful. You could tell a ton of effort went into making viewers believe they were journeying with the crew of the Yamato in space. It was impressive, and I give credit to the studio Xebec for the work they put into making sure this series looked pretty.

Now, would I have had Kodai and Yuki Mori alive after everything is said and done? Probably not, even though I was pleased Yamamoto survive the sacrifice the Yamato made at the end by ramming into the pillar of destruction. But the plot armor of keeping both Kodai and Yuki Mori alive felt terribly shounen, which wasn’t needed. I believed that their both staying on the Yamato as it dives into certain death to save the universe is a fitting end to the ship and the two characters. Considering that Star Blazers isn’t afraid to kill a central character, I think both dying as heroes, together, was a beautiful way to end their story. It felt complete and gave me the sensation that I don’t need more Star Blazers with what both were able to accomplish. And while I still had that feeling with the two alive, it leaves hope of more seasons or stories to tell (which I don’t want). I felt both seasons of Star Blazers tell a great story that doesn’t need any more expansion. But the fact that Kodai and Yuki Mori are alive will keep that lingering thought in my head.

Much like from Star Blazers’ last three releases, the English cast was extraordinary. ADR Director Jerry Jewell deserves a lot of credit for getting the best out of the actors on this project. Christopher Wehkamp and Mallorie Rodak gave stellar performances and conveyed their characters’ conviction and love so wonderfully. I was also impressed with Mike McFarland and Christopher Sabat for their portrayals of Kato and Saito. Both did a fantastic job of conveying the emotional turmoil their characters felt when they found out they betrayed the Yamato. And I greatly enjoyed Colleen Clickenbeard’s rendition of Katsuragi. Listening to her soliloquies was breath-taking, and it was a terrific choice for her character. In fact, the entire cast did a phenomenal job and it was obviously a labor of love for FUNimation to make an amazing production of Star Blazers.

In the second half of this release, FUNimation provided a few extras that fans will love. There was a video of a conversation with the English cast members of the project and an Episode 23 audio commentary. FUNimation also included clean openings and closings for viewers to enjoy.

Having finished watching Star Blazers, I can see why there was a lot of excitement about this series. It tells a beautiful story that hits closer to home than one might realize and certainly is an interesting watch (especially for the folks who don’t want politics in their anime). But I found something special with Star Blazers, where the franchise could hold my attention with some gripping moments when very little was happening. There was espionage, space battles, and a love story wrapped up nicely in one anime series, which is challenging to accomplish. It felt complete and gives anime fans a little something for everyone, and I’m grateful I had the chance to review this series. It’s fantastic, and while I think it would need more commitment from Toonami for fans to pay attention to it, I would be over the moon if it could find its way into the iconic block.

Pros: Star Blazers gives fans a complete story that was satisfying; compelling and intense moments that were a treat to watch; exciting action moments involving space battles; the element of espionage added in; forces viewers to think about the concept of love and how politics and military play a part in decisions civilizations make; a fantastic English cast

Cons: Difficult to follow along if you aren’t pay close attention or if you take an extended break in-between viewings; felt the story would’ve been better if Kodai and Yuki Mori sacrificed their lives.