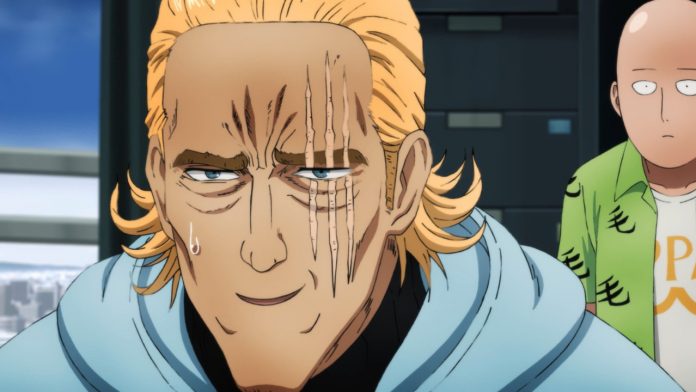 Many fans have been pumped for the return of One-Punch Man on Toonami. With the success of the first season, it was inevitable that the newest installment would join the block. Oddly enough, I enjoy the world that ONE has created more than anything else in this series. Seeing how other heroes live in a dog-eat-dog-world and what motivates them to be heroes is fascinating. And because of the humor and wildly entertaining battles, I think the socioeconomic aspects are often lost on fans. To me, the culture that ONE has created might be the biggest strength of One-Punch Man.

Look no further than that of King, who is labeled as the strongest hero within the Hero Association. We quickly find out that he seems to be in the wrong place at the wrong time, then gets the credit that should go to our main hero (Saitama). Instead of setting the record straight as soon as the accolades are placed on him, King stays silent. And he continues to live his life as an otaku. His social status climbs and he becomes a well-known and beloved figure. However, when King is faced with a real challenge, he becomes scared and runs away (bystanders thinking that is running is part of his ultimate plan to get the job done). It isn’t until King reunites with Saitama that he comes clean about how he’s not a true hero. Expecting to be berated, Saitama doesn’t seem to mind and hits on something that I feel becomes central to the entire series: asking King if he will continue to lie, and therefore give everyone hope that there’s a true hero out there. Saitama seems to realize that if King comes out as a fake, it would destroy the structure the Hero Association has built, which in turn could ruin everything.

The relationship between Saitama and King really is something that I didn't think I'd find as touching as I have (even back when I read it). I love it. These two are great characters #OnePunchMan

It’s not just King who needs a push from Saitama to think about what it means to be a hero. It seems that every hero needs a reality check. While the stipulations the Hero Association have placed encourage individuals to perform heroic deeds when called upon, it’s had a rippling effect, in which the status of being a hero has become more important than actually acting heroically. C-Class heroes run around trying to get any glory to stay within the Association, and heroes who have risen in rank start to form cliques and ideals to try and keep others out. Hellish Blizzard, for example, is trying to rise up the ranks to feel better about herself, since her sister is an S-Class hero. She wants Saitama to join her gang simply because she’s worried about him taking her ranking (number one in B-Class), which could foil her plan to create a group stronger than her sister. And Saitama was rather blunt at how ridiculous that seems to him, especially since Saitama wants to do his hero business for fun.

Sadly, she’s not alone, as many individuals who joined the Hero Association seem to care more about their ranking than helping the public. The Association has created a new caste system that has created a divide between the haves and have nots. Amai Mask purposely abuses his A-Class Rank to keep those he dislikes from the S-Class, as a sort of gatekeeper. Poisoned by the onset of fame and fortune, he’s become more concerned with being the judge, jury, and executioner of the Hero Association than being a true hero. And if it weren’t him, it’d be another hero taking his place because of this ranking system. Instead of doing good deeds to help, many do it only to get a higher ranking, which defeats the true purpose of being a hero.

Saitama stands as the last bastion of what a hero can accomplish when he’s selfless. Although Saitama is so strong he might not care about the rankings as much. At first, he wants to stay in C-Class just so he could continue doing heroic deeds and find an actual challenge. But he doesn’t care about the fame or money that comes from his accomplishments. He never reports what he can do, and in turn, becomes a symbol of heroism in his own right. He doesn’t feel the weight of the ranking system that the Hero Association has put in place, and I wonder if he finds it to actually be a hindrance.

Instead of the adversaries we see in One-Punch Man, it’s the Hero Association that might be the scariest monster of them all. It has created an atmosphere similar to the class systems seen in real life. Back when Saitama joined the S-Class hero meeting during season one, many of those invited were incensed (or found it odd) that a B-Class hero was at the meeting at all. The arbitrary ranking system has become a barometer for the heroes’ worth, rather than their deeds and personal qualities. I believe that is how the extremely wealthy interact with those who aren’t in real life. Depending on how much equity one has, those with large sums of money typically assess a person’s worth from their net worth instead of their character. It would be the same kind of reaction if I stumbled upon the Emmy award show acting like I was supposed to be there when, in reality, I just tagged along. Saitama represents the hard-working everyday person who performs his duties because that’s what he’s supposed to do. And he doesn’t hold the same attitudes as the rich and powerful do. I’m not sure if ONE deliberately created this metaphor, but I’m impressed. Being able to recreate a system as old as time and place it in a superhero world was a charming touch.

It wasn’t until King realizes it was Saitama who saved him (earlier in his life) and inspired him to be a better hero that I become more impressed with the lore that ONE has written. It has created a caste system that effectively explains how the world of One-Punch Man works, and it is relevant to the world we have now. And King plays a massive role in what happens next, due to the choices he has in front of him. If he continues to be the hero everyone believes he is, then many will feel at ease with the calamities that follow in this series. He might have to become stronger and start to believe in the lie himself. Plus, Saitama doesn’t want the fans (especially younger ones) to lose faith in heroes. Seeing their idol fall the way King would if his secret was known would create a devastating blow to the Hero Association that could be unsalvageable. And it’s Saitama’s actions, both with the public and his friends, that is keeping humanity alive by a thread.