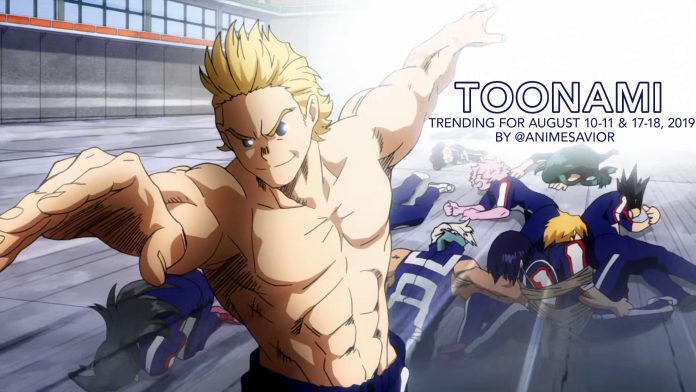 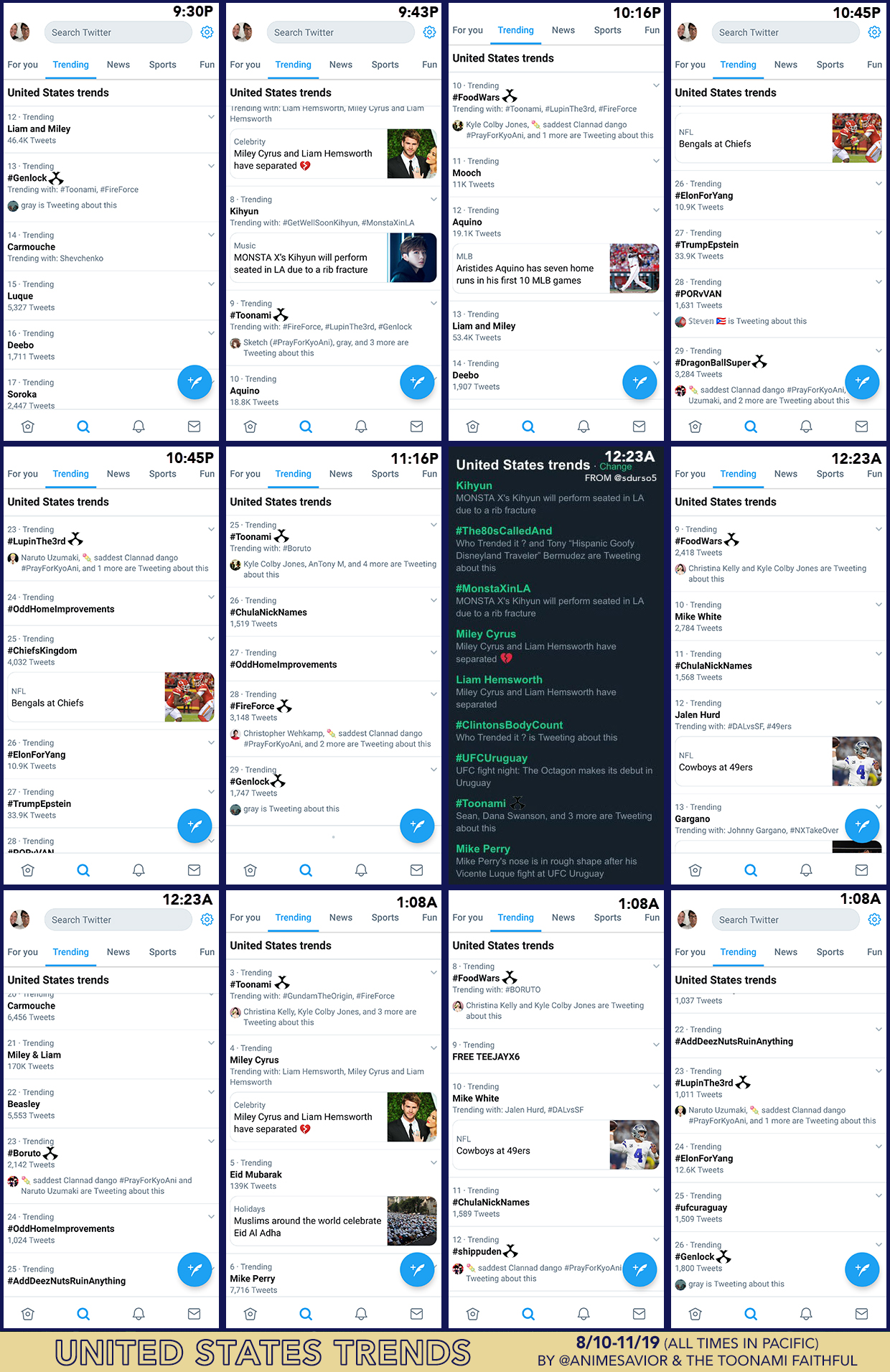 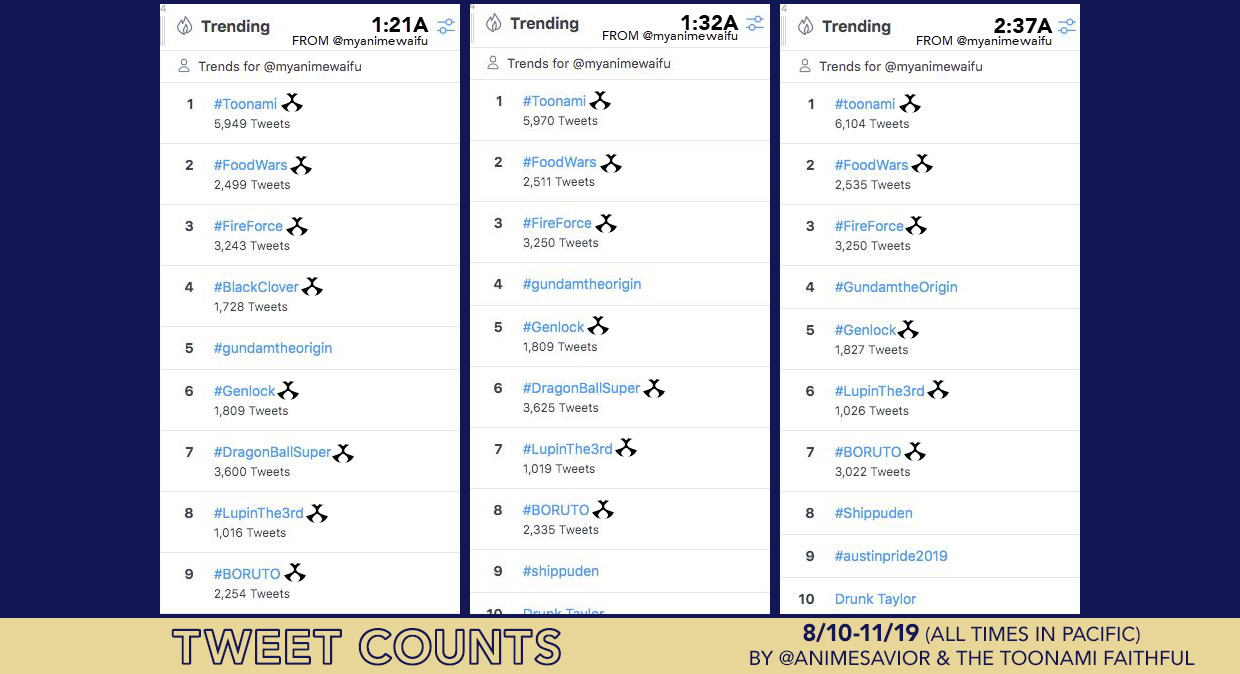 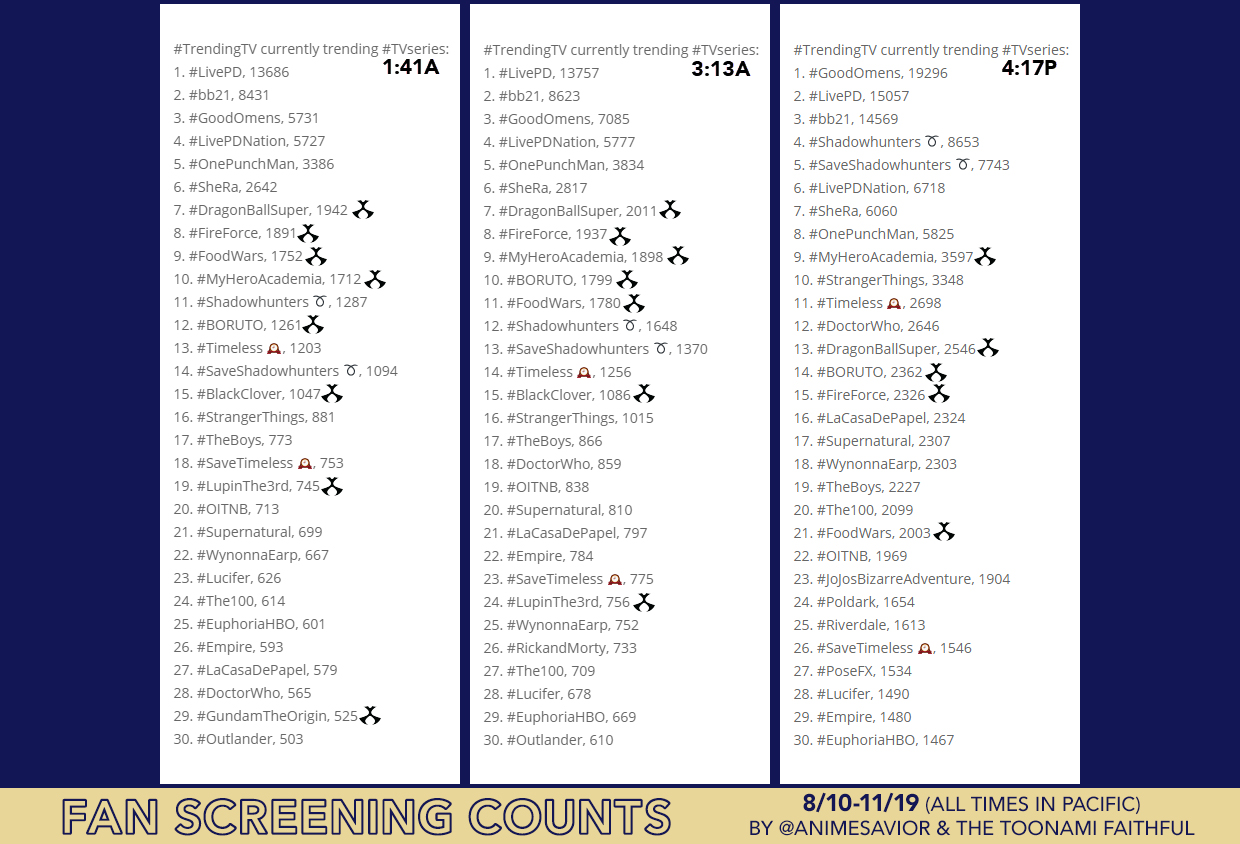 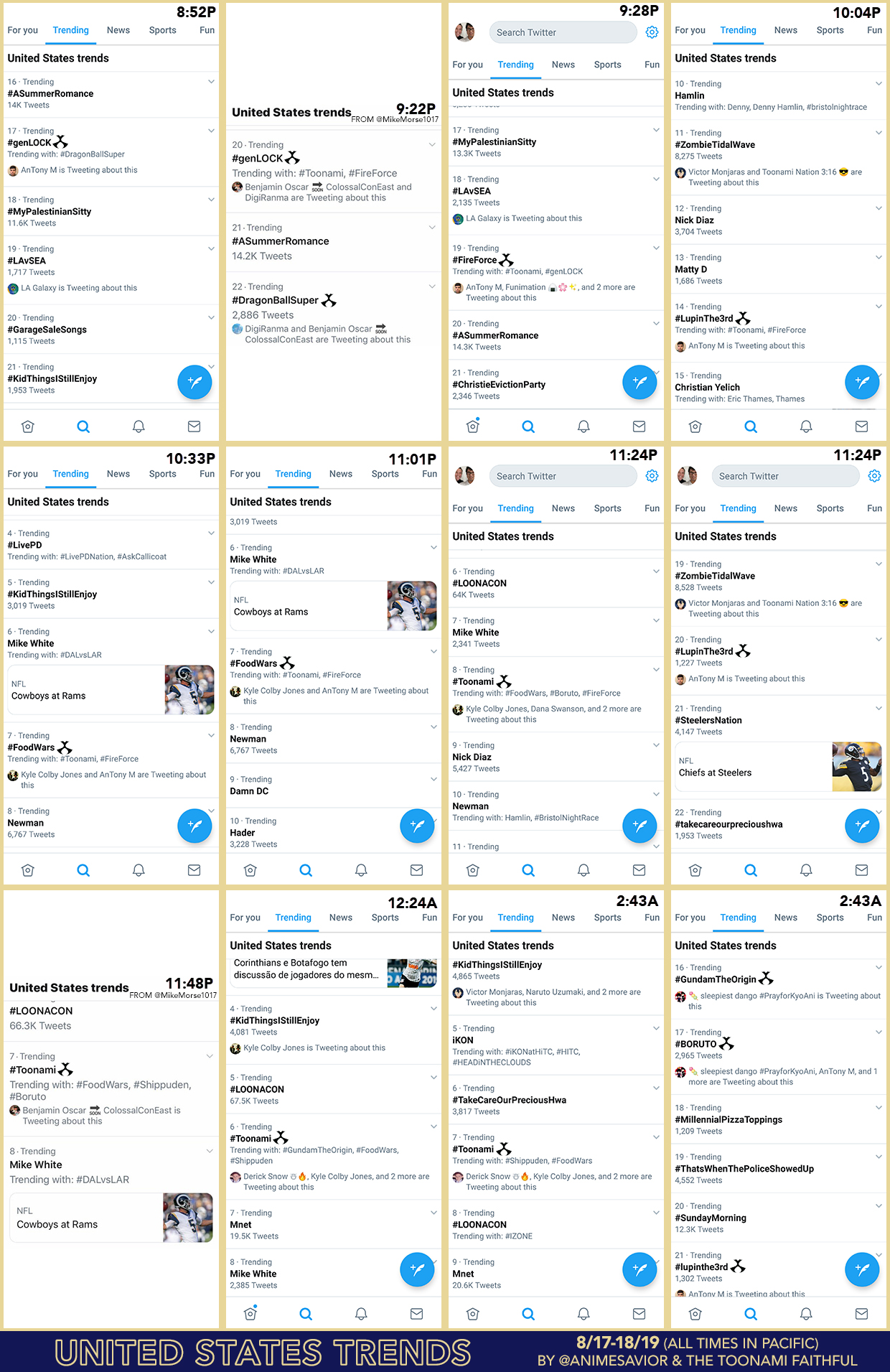 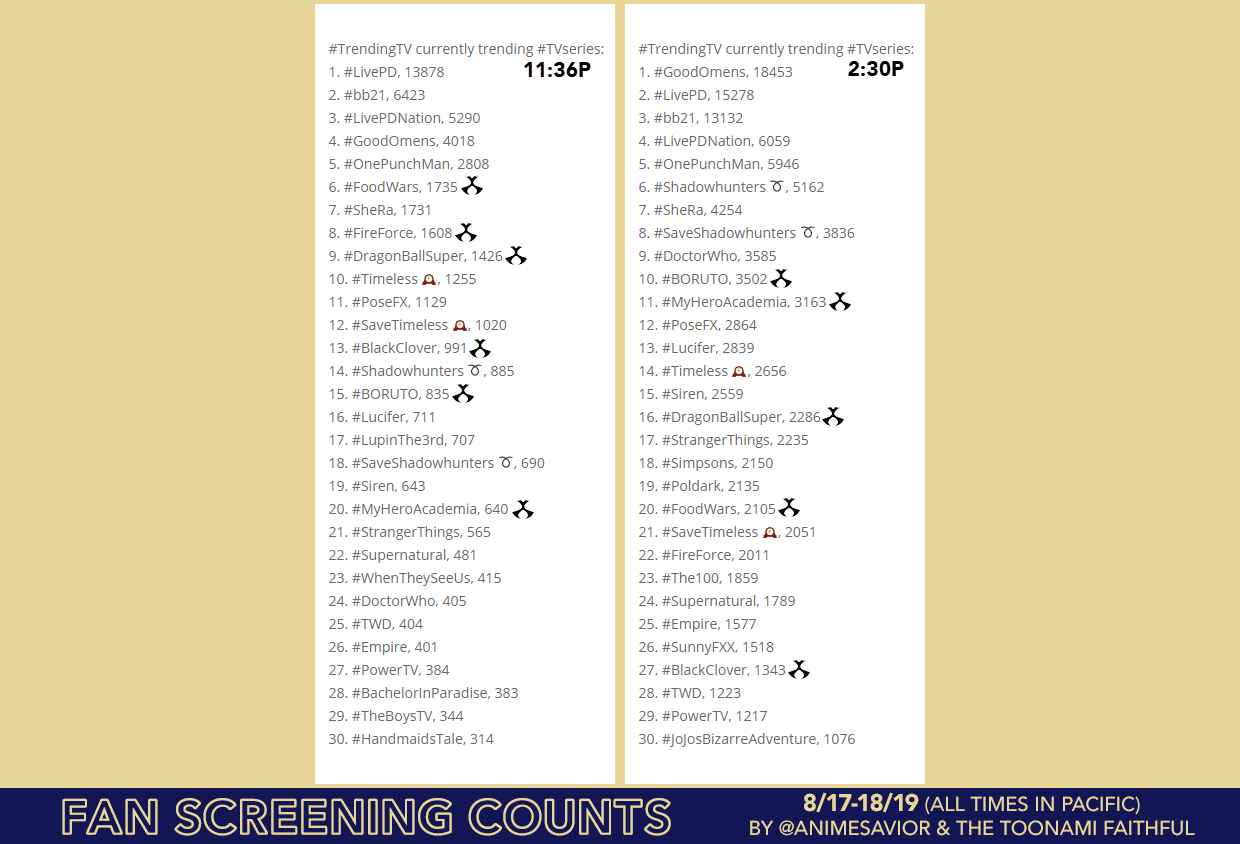 “Growing up, I was always behind as you might expect. in no time, I dropped two dead last. I dropped my pants a lot too. In order to get to the top with this Quirk, I couldn’t just hope that things would get better. I had to think. I learned to make combat positions and picked up a few new tricks, but above all I learned to predict what would happen next. and what made those predictions possible in the first place was experience. I based my predictions on what I’ve learned. This was kind of a roundabout way to get the point across, but that’s why I wanted to fight. To show you through experience rather than words. In our work studies, were not treated as guests like in our internships. We’re regarded as one of the sidekicks or even as a pro. That can be super scary. Pros can get hurt and sometimes they end up watching people die, but every scary and painful think you go through is an important experience that you can’t get inside the classroom, even at UA.  I transformed the experience I got in my work study into power. That’s how I got to the top spot and it’s why I think they’re worth it even if you’re scared, you with me first years?”

This week’s Toonami Trending Rundown is a double-feature for the nights of August 10-11 and 17-18, 2019, as we complete the third season of My Hero Academia. And among other great moments, Deku deals with the reprocussions of his fight with Bakugo while the class prepare to take Hero Work-Studies, while Julian Chase reemerges after 4 years of being MIA with a new mech, and Asta fights Langris after the latter went berserk on Finral, among other great moments.

During both weeks, #Toonami would successfully trend in the US on twitter and on tumblr, and every show with the exception of Black Clover and MHA trended in the US on Twitter. The full list including statistics and tweet counts from the twitter app and Amr Rahmy’s Fan Screening analytics app can be seen below.

For those who missed, I finally published my AX 2019 article, cataloging the Toonami related events from Anime Expo. You can check it out by clicking here. I’ll be aiming to have my SDCC article out as well hopefully within the next two weeks.

This week is gamescom week in Germany, and Bandai Namco has released new trailers for the upcoming games for Sword Art Online Alicization (titled Lycoris), One Punch Man (titled A Hero Nobody Knows) and Dragon Ball Z: Kakarot.

Play as Kirito and immerse yourself in a mysterious virtual world. Get ready for intense battles, stunning JRPG visuals, and an expansive world to explore.

Save the world together as father & son! DRAGON BALL Z: KAKAROT players will experience the tension, action, and ultimate resolution to the fan-favorite Cell Arc storyline when the game releases early 2020!

Just announced at #Gamescom: S-Class Heroes Terrible Tornado, Silverfang, Atomic Samurai will be playable in #OnePunchMan: A Hero Nobody Knows!

Watch the trailer to see NEW gameplay and then pre-order your copy: https://t.co/oXUMS6CcNJ pic.twitter.com/wSAtynr7Pq

Viz Media also released the 6th set of the Hunter x Hunter Blu-ray and DVDs last week, containing the latter half of the Chimera Ant arc. The Blu-ray retails for $54.97, while the DVD retails for $39.99.

Gon and his friends are on a mission to exterminate the Chimera Ant King! pic.twitter.com/Ktlial7hOV 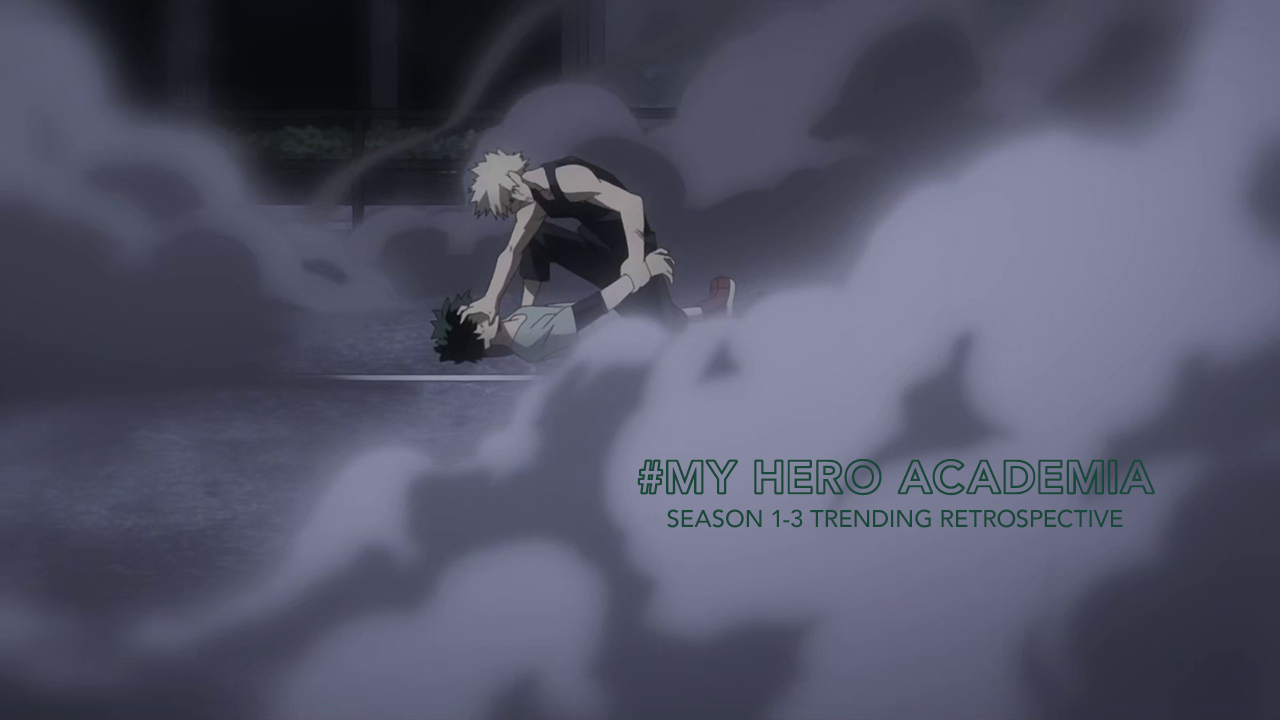 It may have taken awhile for My Hero Academia to join the better cartoon show, as over a year and a half ago, Jason confirmed that Toonami couldn’t get the rights for MHA at the time. But fans persisted and things changed behind the scenes. As the old saying goes, better to be late than never, and thankfully the show would finally make its Toonami debut last May.

62 episodes later, and now we can say that we are officially caught up with My Hero Academia. During the Toonami run of the first 3 seasons, the show trended in some capacity on Twitter during 12 weeks of its run, including 3 times in the US. The show fared better on tumblr, with #myheroacademia trending during 12 weeks, #bokunoheroacademia during 6 weeks, and #bnha in 28 weeks. Full statistics, including those seen in Amr Rahmy’s Fan Screening site (where 27 different occasions it made the top 30) can be seen in the image below. 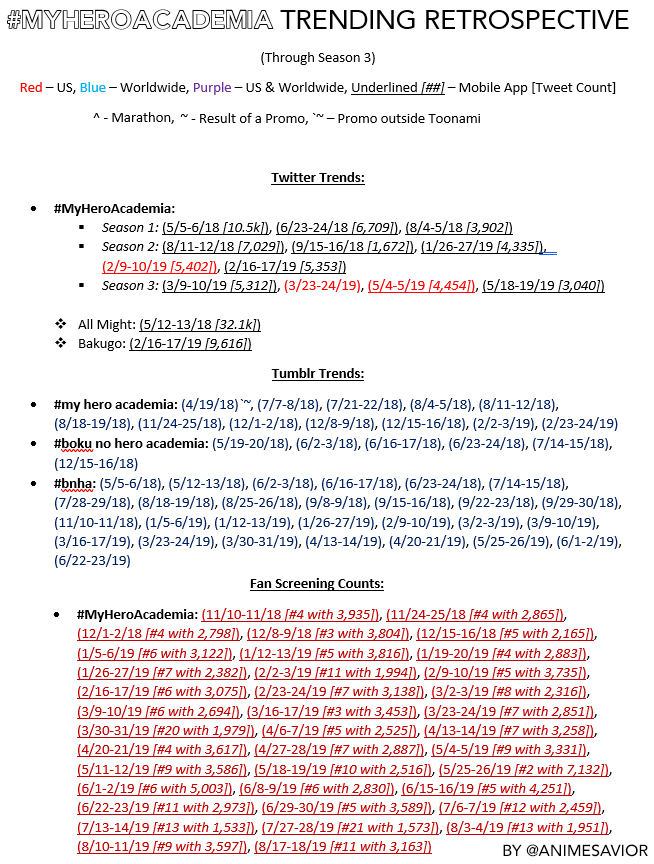 Of course, My Hero Academia is far from over, as we now join the simulcast viewers in anxiously waiting for the Season 4 premiere sometime this October. I got to attend the MHA 3 premiere at Anime Expo and made a report about it during my AX 2019 highlights article, and from what I’ve seen, I’m as excited as many of you probably are for the upcoming season.

While Crunchyroll and Funimation Now will simulcast and simuldub the show respectively as with previous seasons, it’s yet to be revealed if Toonami will get to be a part of the simuldub (like with Attack on Titan), whether they will have to wait a few weeks (as with Black Clover and Fire Force), or whether they will have to wait awhile (as with Mob and MHA previously) to see it. We wish we can give you an answer, but both Toonami and the distributors tend to be quite secretive about these things until shortly before the premiere and things are always happening behind the scenes, so we’ll just have to wait until a definitive announcement is revealed in the Fall. Nonetheless, it’s great to see My Hero Academia continuing to reach new heights in popularity, and seeing Toonami being a part of its growing success is partly why we continue to support the better cartoon show. Here’s hoping MHA and Toonami will continue to be a match made in heaven for years to come.

In the meantime, Toonami will be encore running MHA weekly at 4:00 am Eastern, and of course, we got another hit Shonen Jump show headed our way… 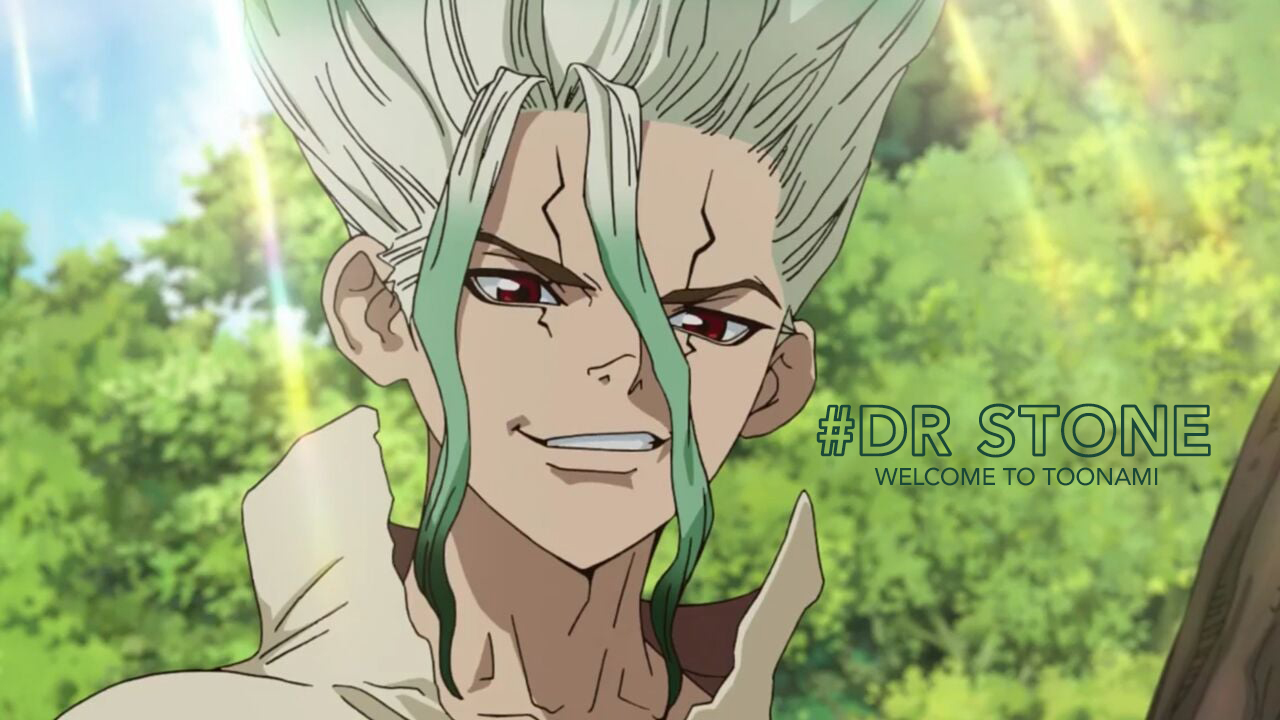 Some of you have been saying “Now that we got Fire Force, and Demon Slayer is coming this fall, can we get Dr. Stone as well?” We’ll ye asked, and ye shall receive. Last Friday, Toonami and Crunchyroll announced that the hit anime series Dr. Stone will be joining the better cartoon show beginning this Saturday.

I’ve been hearing a lot of good things from Dr. Stone since its premiere at Anime Expo, where CJ, VLord and LumRanmaYasha were among the lucky fans who got to be there, whom have all given it a positive review. Dr. Stone, along with Fire Force and Demon Slayer, are among the top shows in the Summer 2019 anime season with big viewership in Crunchyroll and Funimation Now, and no surprise that it was highly requested according to Jason DeMarco.

“Taiju is about to confess to the girl he loves when a mysterious force hits the Earth and turns every human into stone. Taiju and his friend Senku wake up thousands of years later and begin to rebuild society.”

Dr. Stone will air at 12 am Eastern beginning next Saturday, while Fire Force will be moved to 12:30, while Lupin fans get the short end of the stick this time around as Part 5 will be moved to 3:30 am. Yeah, we’re bummed about Lupin too, but we hope you can stick around and/or DVR the block regardless. 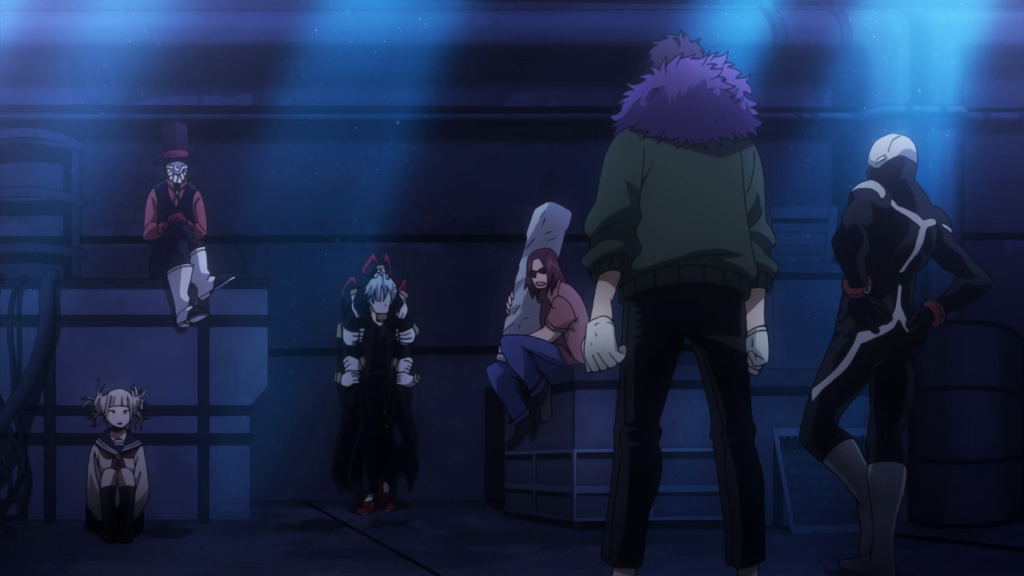