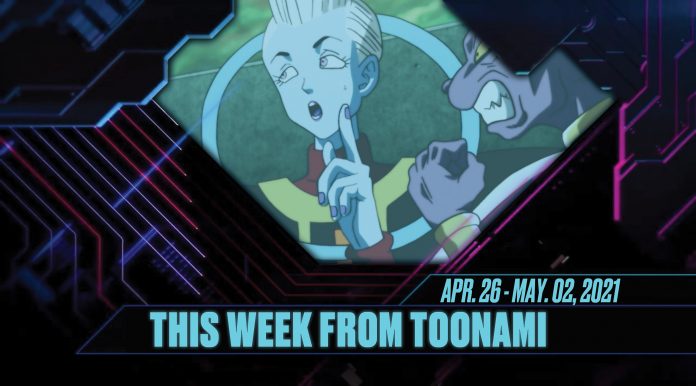 Welcome back to another installment of This Week From Toonami! We’re still reeling from the end of not one, but two shows on the block. Fans bid farewell to Demon Slayer after completing its encore run, and Attack On Titan‘s mid-season finale left fans wanting more. But don’t fret! There are new additions to Toonami on the horizon.

Toonami debuted a promo for My Hero Academia’s fifth season that will join the lineup next Saturday! Check out the latest Toonami video below captured by staff member Junior!

Last checked, the Demon Slayer movie Mugen Train has grossed over $29.5 million at the box office. The film smashed records in the U.S. after its release and continues to garner attention worldwide. This series continues to climb as one of the most popular franchises to ever come out of Japan!

On April 24, composer Shunsuke Kikuchi passed away due to aspiration pneumonia. Many Toonami fans would recognize his work for composing the music for series like Dragon Ball, Dragon Ball Z, and many others (Dr. Slump, Kamen Rider, Tiger Mask, etc.). He was 89 years old.

This past week was the birthday of Yu Yu Hakusho and Hunter x Hunter author Yoshihiro Togashi! While Hunter x Hunter is still on hiatus due to Togashi’s health, many fans relived their favorite moments from his properties as well as wishing him a happy and healthy birthday.

It was Megas XLR Day on May 1 as creator George Krstic commemorated the event with a tweet. Seventeen years ago, the hit phrase “chicks dig giant robots” graced the Cartoon Network airwaves and would later run on Toonami! During its tenth anniversary, Toonami Faithful had a chance to talk to the creator of the series in a podcast!

Crunchyroll and Adult Swim have been working together for Toonami to air some original content, hopefully later this year. However, the streaming giant seems to have partnered with WWE to make an anime. As of now, it’s unclear if this project will find a home on Toonami, but it is certainly something interesting for fans to keep tabs on in the future.

In a recent interview, My Hero Academia author Kōhei Horikoshi recently stated that the manga is heading toward the ending he envisioned back before the series even began. While the manga has gone on longer than he thought, it’s nice to know that My Hero Academia isn’t getting rushed or dragged out (a fate many authors have faced over the years).

The clock is ticking in Dragon Ball Super as the Tournament of Power continues. Caulifla demands that Goku teach her how to reach Super Saiyan 3. Goku tells her that she must master Super Saiyan 2 first and promptly spars with her, egging her on by pushing his power limits despite not fully recovering from using Ultra Instinct. Kale joins the fight, but she goes berserk when trying to prove her strength to Caulifla. Attack On Titan signals the beginning of the end for Eren and the others as the series begins to wind down. Yelena and the Jaegerists imprison people who would stop Zeke and Eren’s plan to activate the Rumbling. Pieck reveals herself and offers to help identify the soldiers that came to Paradis as long as she and her family are spared. Eren agrees, and Pieck leads him to a rooftop in Shiganshina, where Porco lies in wait as the Jaw Titan. Porco bursts through the roof and manages to bite off one of Eren’s limbs. Reiner, who is returning to Paradis for the first time in years, arrives with reinforcements from Marley in zeppelins, all prepared for what may be their last battle.

Hot-headed chefs Ryo and Rentaro battle for the fate of the Cutting-Edge Cooking Research Society in Food Wars! The Third Plate. Rentaro demonstrates a flashy cooking style using high-level equipment like a cryogenic grinder and steam-convection oven to cook his salmon confit flamme, wowing the judges with his skillful application of heat. However, Ryo’s salmon coulibiac edges ahead to victory with a secret seasoning blend created by himself, giving his dish a careful balance of flavor to achieve savoriness. The Promised Neverland proves that good things aren’t always what they seem when Emma and the children discover harrowing messages deep in William Minerva’s bunker, including one from Minerva himself telling the children that they can stay there or flee as he did. The children decide to use the bunker as a base to prepare for their journey to the human world. Meanwhile, the demons offer Isabella freedom and more if she agrees to help return the children to Grace Field House.

Shinra, Arthur, and Tamaki pay a visit to Benimaru Shinmon for training in Fire Force. While Benimaru puts the boys through intense fire-resistance exercises, Tamaki plays an intense game of tag with Hika and Hina where either of the twins must not tag her for 60 seconds. Tamaki reflects on her journey to become a fire soldier and becomes determined not to rely on her friends’ strengths anymore. In the process, she releases her full power and wins the game, earning praise from Benimaru. Magna returns with Captain Yami and other Magic Knight captains to rescue Noelle, Asta, and Nero in Black Clover, including Kabwe’s former superior, Lord Damnatio. Dazu and the other Devil Worshippers summon their mana all at once, which creates a giant ice monster from the Spade Kingdom to attack. The Magic Knights make quick work of the beast, and Dazu is struck by their kindness to save her despite the crimes she has committed. The captains reassured the Devil Worshippers that they did not come to arrest them; instead, they came only to rescue their friends. Damnatio passes judgment upon Bow and Dazu for their crimes, exiling them from the Clover Kingdom. The Devil Worshippers accept his decision and continue on their journey to the Spade Kingdom.

The five Kage continue to hold off Madara and attacks from his Susano-o in Naruto: Shippuden. The Tsuchikage rallies the others to keep giving their all, and they launch an attack on Madara’s clones. Meanwhile, the Uchiha brothers battle with Kabuto rages on, and Itachi demands Kabuto to stop the Impure World Reincarnation jutsu. Sasuke doubles down on his resolve to avenge his family by destroying the Leaf Village as he bids farewell to his brother. Itachi uses his sharingan in his last moments to show Sasuke the truth of the Uchiha clan’s downfall and tells him, “I will love you always.” In the final episode of Demon Slayer, Muzan Kibutsuji summons the Lower Kizuki to test their loyalty. He kills all but the sadistic Enmu, with whom he shares some of his blood to enhance his powers. Meanwhile, the boys are healed and stronger than ever after their rehabilitation at Butterfly Mansion with Shinobu Kocho. They set out on their next mission on the Mugen Train, where the Flame Hashira Kyojuro Rengoku awaits them.

On the latest Toonami Faithful Podcast, hosts Andrew “Sketch” Hingson and CJ Maffris had the honor and pleasure to interview the creator of Toonami, Jason DeMarco. While the interview had to be shorter than usual, DeMarco shared what it was like working on Toonami during the pandemic, who is in charge of the programming choices made in 2020, and how Cosmo Samurai was decided to be a thing.

At Toonami Faithful, we are happy to announce a new addition to the social media team after a recent shake-up. Celia Rose was promoted to Director of Social Media as the team welcomes a new member, Steven Oz. We are excited to bring in another fresh mind to help us strive to build the best Toonami News Source and more inviting community since we’ve lacked in that aspect for quite some time.

Last Sunday, Toonami Faithful released another behind-the-scenes interview of the documentary, What Toonami Means To Me, featuring Lizzie Freeman. Check out what she had to say about how Toonami inspired her and her feelings of hearing her voice on the iconic block for the first time and a main character in Trish from Jojo’s Bizarre Adventure.

Former staff writer Alien Renegade did a write-up looking back at SSSS.Gridman’s run on Toonami. Was it too niche to air on the block? Or did the series find an audience within the Toonami community? Check out all the highs and lows from Alien’s article.

While Attack on Titan is on a break, staff writer Umeko Long continues to break down everything from the series. This recent review discusses Zeke’s backstory and sheds light on what led to his betrayal toward Grisha (his father). Now people seem to have sympathy for Zeke despite the pain he’s caused in previous seasons, and Long gives us every detail from the episode!

On the latest Demon Slayer Podcast, host Varun “VLordGTZ” Gupta is joined by Bryan “LaserKid” Johnson to talk about the success of the Demon Slayer film (as well as talking about the Mugen Train bus spotted around Los Angeles).