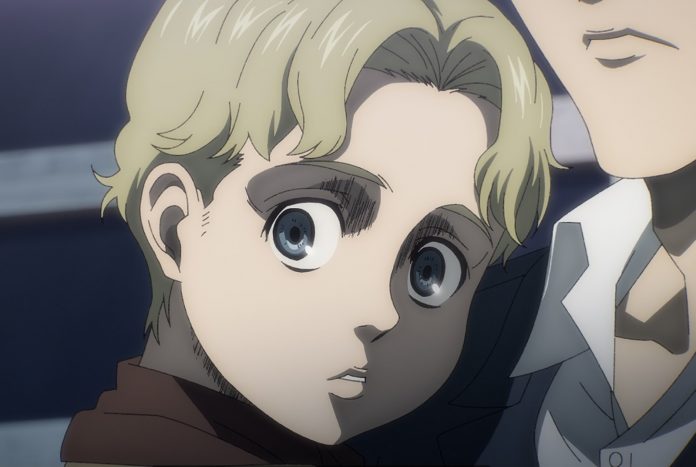 Zeke Jaeger’s backstory was captivating and intriguing as this week’s episode dove into his childhood. Zeke learned how cruel the world could be at an early age when water was thrown at him by a citizen of Marley during his visit outside of the internment zone of Liberio. Even children weren’t exempt from the harsh treatment of Eldians, which can only strengthen the uneasiness some viewers might feel. Another interesting component of Zeke’s childhood is learning Eldia’s history from his grandparents (interpreted by Marley) and parents ( Eldian Restorationists). Zeke seemed to be more enthusiastic about his parents’ side of history, which had to be difficult having two seperate lessons from his family.

As a warrior candidate, Zeke felt immense pressure from his parents to become an honorary Marleyan for their selfish interests. Being at the bottom of his class and believed to slack off during training, Zeke was cast out by Commander Magath (ruining the plan his parents had for him). Zeke begged Magath for another chance to train, but his efforts were in vain as he continued to struggle even after the most manageable tasks. This time, his parents witnessed Zeke not measuring up to other warrior candidates, and Grisha didn’t hide his displeasure as both walked away in disgust. Chris Hury was stellar in expressing Grisha’s anger and disappointment, which made me dislike Grisha for being a complete jerk to his son (seems to be a reoccurring theme with Grisha). It was heartbreaking watching Zeke cry due to the trauma he dealt with as he was growing up in the harsh world where he was. I had compassion that I was not expecting to have for Zeke since he was not treated as a child but used as part of his parent’s plans to restore Eldia. Zeke would rather play catch with his father instead of studying Eldia’s history, but a baseball rolling to him while walking home one day changes his life.

Zeke meets Tom Ksaver (the man playing catch with him at the end of the previous episode and the Beast Titan at that time) after being kicked out of the warrior training program. After days spent playing catch in their free time, Zeke and Ksaver developed a friendship that resonated with Zeke. We learn it was Ksaver who encouraged him to report his parents for being Restorationists. It led to a very emotional scene where Ksaver would continue to praise Zeke for who he is and remind him of his parent’s atrocious acts, and seeing how the events actually unfolded, it paints a new interesting picture of Grisha and how viewers should look at him as a character. Instead of looking like someone being attacked for doing the right thing, Grisha should be viewed more in a manipulative way than anything. His son wasn’t brainwashed by a false history to rat on his parents. Zeke did what he did to save himself due to him failing what Grisha had planned for him, which makes me wonder about Grisha. And while he is a victim of the prejudice Marley has toward Eldians, Grisha isn’t squeaky clean in this now that we see how things in Marley transpired.

In any case, Zeke turning in his parents did keep himself, and his grandparents safe as Ksaver believed it would, as it would seem that he had his plans for the child as well. After his parents were sent to Paradis Island, Ksaver became the father Grisha failed to be for Zeke. John Burgmeier (Ksaver) and Jason Leibrecht (Zeke) displayed the father-son dynamic between Zeke and Ksaver perfectly. Burgmeier’s performance showed us the kind of father Zeke longed for but didn’t get in Grisha. Having supportive parents is key to a healthy family dynamic, especially for molding a child into a responsible adult, which Zeke was able to experience with Ksaver and his grandparents.

Ksaver explains how the Beast Titan isn’t helpful in war, so his time is spent studying titans, specifically the Founder Ymir. Through years of research, Ksaver learns the Founder’s power over Subjects of Ymir, such as rewriting memories and changing the bodies of Eldians. This moment is when Zeke has the idea of using the Founder’s power to make Subjects of Ymir unable to have children (referred to as the euthanization plan), which would get rid of titans and end the world’s fear. Now that we know Zeke’s plan, it reads as a horrendous act to take away this choice to have children from Eldians. This plan is no better than what Marley and other nations were doing to eliminate titans (even if Zeke feels this will end Eldia’s suffering). I wonder how Hange and the rest of Paradis will react when Zeke’s plan is revealed and if they will work harder to stop him.

Ksaver also reveals how to get around the Founder’s vow of not going to war, which calls for Zeke, being of royal blood, to contact the person who inherited the Founding Titan to unlock the Founder’s full potential. But it’s still up to the current Founding Titan’s discretion on how to use the full power once it’s opened. Years after inheriting the Beast Titan, Zeke was appalled to learn from Reiner and Bertholdt that the Founding Titan is in possession of his younger brother Eren, which meant his father survived and started a new family. Zeke vows to save Eren, which leads to these two having a conversation years later during Eren’s time in Liberio. Surprisingly, Eren agrees to Zeke’s euthanization plan to end the reign of titans worldwide, which makes me wonder, who really is the main hero of this story now? And, is the rumbling a disguise for the euthanization plan, or if both will take place?

Returning to the present, Zeke wakes up after being tortured by Levi with a thunder spear still in his stomach and the trigger around his neck. Zeke tells Levi the only way to save Eldians is to be put out of their misery, leading to Zeke denoting the thunder spear! The episode ends with the explosion sending Levi and Zeke flying in different directions. This cliffhanger left us with the cruel thought of wondering if Levi is dead or alive, eliminating all sympathy this episode attempted for fans to have for Zeke Jaeger.