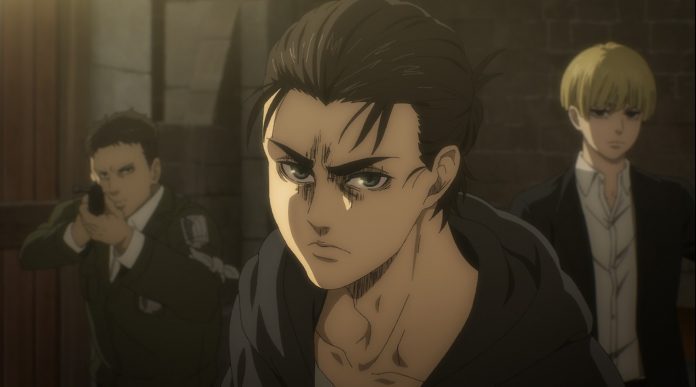 The season finale (or at least the end of part one) of Attack on Titan takes us back to Shiganshina as the Jaegarists are in total control and relocate the military to the place where the entire story began. Yelena continues the bidding of the Jaegar brothers as she speaks with Commander Pyxis, fulfilling the promise of the two dining together back when Pyxis was investigating her. Although this time, Yelena is in charge due to Paradis’ military consuming the poisoned wine, where we’ve learned the last episode can cause people to transform into titans. Shinganisha has been evacuated in case that outcome comes to fruition. As the two leaders dine, Yelena speaks of Zeke saving the world, leaving Pyxis confused with  the goal was to reunite Zeke and Eren for a small-scale rumbling to deter the world from attacking the island. Sadly, the goal is far more heinous.

Armin, Mikasa, Connie, Jean, Niccolo, and the Braus family are held as prisoners when Yelena, Onyankopon, and Griez visit their cell. As the two sides talk, Griez goes on a tangent about Niccolo’s betrayal and Greiz’s disgust toward him for loving an “island devil” (Sasha). Due to the commotion this started, Yelena shockingly killed Griez, ensuring that her leadership (or the administration of the Yeagers) those who inhabit Paradis should no longer be considered devils. And in hopes of continuing diplomacy, Yelena decides to reveal Zeke’s plan to our heroes in the cell. It’s been a remarkable ride watching Anairis Quiñones (Yelena) in her performance. She brings Yelena’s obsession with the Jaegar brothers and disillusioned sense of a peaceful end to the Eldian race in this episode to life. I’m left speechless that a character introduced this season has created such a lasting impact, and a lot of that has to do with Quiñones’ acting.

Last week’s episode explained the euthanization idea as Zeke using the Founding Titan’s power to change the bodies of Eldians, so children are unable to be born. As Yelena spells out, the rumbling still comes into play to keep other nations from attacking, which will give Eldians the chance to die out of existence. Another moving part in this plan is for the royal family and a few Subjects of Ymir to continue existing so the Founding Titan can be passed down every 13 years until Historia’s child dies. And so Yelena and Zeke are working together to commit genocide toward the Eldians. So now, viewers get the complete picture of this twisted ideology of saving the world. And to make matters more troubling, Eren AGREES to do his part in making Zeke’s plan a reality by betraying his closest friends and comrades.

I don’t believe Eren at the beginning of the series would recognize the person he became this season. His focus shifted from killing all titans to working with Zeke to end the Eldian race. We saw Eren begin to change after he experiences his father’s memories at the end of season three, which may influence his view of the world. I don’t think anyone imagined Eren becoming his cold-hearted person who would turn his back on his friends, especially Armin and Mikasa.

However, you can’t have the final episode without Eren as he makes a triumphant appearance when he visits Gabi. It was a ploy to lure out potential spies and worked swimmingly when Pieck came out of the woodworks. She ends up killing Eren’s escort and has a pistol aimed at him, beginning to threaten everything he’s done. Being unbothered by Pieck’s threats, Eren is confident he won’t be killed because he believed Pieck’s orders are to retrieve the Founding Titan. After she lowers her weapon and tells Gabi to do the same, Pieck begins discussing her ill father being the reason she became a warrior while expressing her desire to end Marley. Shockingly, the two ended up making a deal which drew Gabi mad. She calls Pieck a traitor, to which Pieck reminds her that both are a Subject of Ymir. Being called an honorary Marleyan doesn’t change the fact that they are a race of people who turn can into titans.

I exploded with applause at Pieck’s speech because these are the truths Gabi desperately needed to hear. Attempting to show the world a “good Eldian” doesn’t matter when people know you can turn into a titan, who the world has feared for centuries. I can identify with being a “good person” means nothing when people have formed an opinion without knowing you personally or professionally because of my racial background. In Gabi’s case, she’ll always be an Eldian with or without the title of an honorary Marleyan, which makes me wonder how she will handle this type of reality pushed in front of her. Amber Lee Conners (Pieck) was a standout performance at the point to me because we experienced Pieck’s personality, attention to detail, and being an overall likable character, making her a fan favorite.

To form an alliance, Pieck agrees to take Eren to the building’s roof to show other intruders as proof she’s turned her back on Marley. Pieck brings Eren out in the open for a chance for Gaillard (in his Jaw Titan form) to attack, leading Marley’s airships to their location. We see Marley decided not to wait for the global alliance and move forward with a counterattack. The episode ends with Eren transforming into his titan form, ready to take on Reiner and the rest of Marley’s armed forces.

And right now, that’s how the final season of Attack on Titan ends. We start with an attack on Marley, and then Marley’s counterattack finishes it. This season, there were several shocking moments, from Eren’s transformation to an antagonist and learning about Zeke’s euthanization plan. We lost Sasha (still mad at you about this, Gabi), but we still enjoyed her presence in flashbacks. In what can only be called one of the strongest English dubs in anime, the cast delivered so many memorable performances for this unforgettable first part, and I anxiously await for them to return for the remainder of the season. It has been announced the next episode will premiere in the winter of 2022, and possibly more episodes will follow after that! And for those who can’t wait, the manga has finished, so there is a way to continue experiencing Attack on Titan. And considering how long fans have had to wait, I wouldn’t fault them if they decided to read the manga. I’m excited for the rest of the adaptation because studio MAPPA has done a fantastic job so far. But don’t worry Toonami fans, the block will rerun these 16 episodes starting next week, replacing Demon Slayer: Kimetsu no Yaiba. It’s been a pleasure reviewing these 16 episodes of Attack on Titan, and I look forward to reviewing part two of the final season when it premieres on Toonami (fingers crossed!).