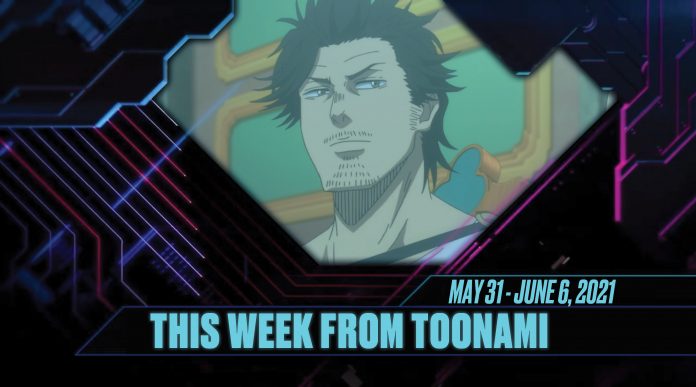 Welcome back to another installment of This Week From Toonami, your weekly round-up of everything Toonami-related that happened within the past week! Check out the news below to see what you may have missed, as well as highlights from this week’s Toonami and projects from our staff. Let’s get into it!

This week, the Toonami extra for fans was a brand new TOM Speech! There haven’t been many of these recently (which I’m sure many fans have been missing). So it was a sight to behold to have one of the hosts for the block sit down and chat with fans. The topic for this video was helping, and it certainly comes at a great time, all things considered from the events from last year. This particular video felt a lot strong due to the subject matter of asking for help, and Toonami Faithful recommends all fans to check this speech out!

In a shocking turn of events, the English dub of MegaloBox’s second season was announced, but not where fans expected. Instead of debuting on Toonami (like the first season), this time around, the series will premiere on FUNimation’s streaming service, FUNimationNow. The cast will more or less stay the same, but Toonami fans will have to wait to see if this series will eventually find its way on the block. It’s a bit disheartening, but if everyone continues to request it, then maybe it will air on Adult Swim!

The Sailor Moon Eternal movies debuted on Netflix earlier this week, complete with an English dub featuring the same cast from VIZ Media’s other Sailor Moon releases. The two movies are a direct sequel to Sailor Moon Crystal Season Three and adapt the Dream Arc from the manga, which was previously adapted as Sailor Moon SuperS, the fourth season of the original tv series. They are directed by Chiaki Kon and feature character designs by Kazuko Tadano, who designed the characters for the first two seasons of the original TV series and the 1993 Sailor Moon R film. Both Eternal movies arrived on the giant streaming platform less than six months after their cinematic debut in Japan, which is rare even in this age of simulcast anime. These films are a must-see for Sailor Moon fans!

And do you have enough Demon Slayer in your life? Probably not, so this week, two different character trailers for the upcoming Demon Slayer console video game debut! Both Tanjiro and Nezuko were showcased (with English subtitles) for SEGA’s new fighting game with English subtitles. Fans can expect this video game to be available this year on all major gaming platforms!

Class 1-A and Class 1-B training exercises continue in My Hero Academia by diving right into the second match. Class 1-A’s team quickly discovers that their opponents have been anticipating their every move, using Kuroiro Shihai’s ability to move through darkness to catch them off guard and even take control of Tokoyami’s companion Dark Shadow. Tokoyami shows off a new move that he learned from his work-study with Hawks, Dark Fallen Angel, that allows him to fly with Dark Shadow’s help. Together, they put a stop to Shihai’s Quirk. Still, there’s no time to celebrate as Kinoko’s mushrooms begin to appear on Class 1-A’s team members, indicating that Class 1-B has already started to carry out their alternate plan. Senku takes on his biggest science project yet in Dr. Stone when he decides to build a steam engine car, likening the assembly process to that of a model kit. Meanwhile, Chrome surrenders to Ukyo, Tsukasa’s sharp-eared marksman who developed his sense of hearing when working as a sonar technician for the Navy before the petrification. Chrome comes face-to-face with Tsukasa for the first time when Ukyo brings him back to his base camp, where he declares that he will show Tsukasa just how wonderful science is. Instead, Tsukasa interrogates him and asks Chrome to betray Senku for the sake of the village’s safety.

The Advancement Exam continues in Food Wars! The Third Plate as Soma and his friends move on to the next round of exams. Like their previous challenge, they find themselves lacking the ingredients they need to complete their dish thanks to sabotaging by the test proctors loyal to Azami Nakiri. However, Erina’s intense training on Hokkaido cuisine comes into play when Soma decides to use potatoes as a substitute ingredient to make udon noodles. His final dish, snowfall udon, blows the proctor away, and he and his friends pass the challenge. Later, Erina, Soma, Megumi, and Takumi get on the train to the next exam destination. Still, a frantic phone call from Hisako alerts them to Central’s plan to split up the rebel students on different exam paths. Now, Soma and his friends must face the Elite Ten members to make it to the next round. The Promised Neverland takes a poignant turn when Norman realizes the horror of his plan to eradicate all demons. He admits to Emma, Ray, and his companions from Lambda that he only wanted freedom and to be with the people most important to him. He also reveals that he was subjected to drug trials at the Lambda complex and that he is dying. Sonju and Mujika arrive and survey the chaos in the village. Mujika offers some of her blood to save demons from completely degenerating. An old blind demon shares a missing piece of William Minerva’s pen with Emma and tells her about his final moments before he died and the demon ate him. The report contains blueprints for Grace Field House, including the gate to the Human Side. With this new information, the children resolve to return to Grace Field House to save their friends, unbeknownst to the trap that Isabella has laid there for them.

Black Clover takes a breather as the third season begins to wind down, focusing on the Magic Knight squad captains once again. The Magic Knights have the opportunity to receive special training from the Heart Kingdom to become Spirit Guardians. They ultimately decided that Asta, Nero, Noelle, Luck, and Finral from the Black Bulls should go, along with Mimosa of the Golden Dawn, Charlotte from Blue Rose, Rill from Azure Deer, and Leopold from Crimson Lion. Meanwhile, the remaining Magic Knights and captains prepare for the upcoming honors and awards ceremony. Naruto: Shippuden reveals Tobi’s true identity at last, that he is Obito Uchiha, Kakashi’s former teammate from whom he received his Sharingan eye. Obito was believed to have died during the Third Shinobi War, but he was saved and healed by an elderly Madara Uchiha. After he is healed, Obito learns of Madara’s plans to unify the world, and he attempts to escape so he can be reunited with his teammates. In the present day, Madara and Obito discuss the progression of their plans thus far, and Madara remarks that the five Kage battling him on another front are not doing well. He learns from Obito that the reason he was not reincarnated as a living human is Nagato’s doing, which angers Naruto that they involved Nagato at all.

Eren and Reiner meet face-to-face for the first time in four years in Attack On Titan, much to Reiner’s dismay and Falco’s bewilderment since he believed the two were old friends. Eren tells Reiner that they’re located beneath an apartment building and signals a taciturn warning with the cut on his hand that he will transform into his Titan form at any moment, regardless of the people who may die when the building is destroyed in the process. When Reiner asks why Eren came to Marley, Eren coldly replies that it was to do the same thing Reiner did back on Paradis years ago. Willy Tybur’s play begins, and he tells the true story of Marley’s founder Helos and King Fritz of Paradis. He tells the audience how Eren stole the power of the Founding Titan and warns that he could activate the Rumbling and unleash hundreds of titans upon the world. Our editorial writer Umeko reviewed this episode in total during its initial airing, which you can read here! Just fifteen minutes left on the clock in the Tournament of Power on Dragon Ball Super, and the remaining competitors are starting to feel the crunch! Eliminated fighters cheer from the sidelines, encouraging (or threatening) their teammates to keep moving forward and fight for the sake of their universes. Goku, Android 17, and Android 18 team up to battle fighters from Universe 2. Meanwhile, Piccolo and Gohan take on Saonel and Pilina, who had assimilated with other Namekians to increase their strengths and life force. Gohan decides to unleash his full strength on them and Piccolo attacks with a special cannon beam. At last, all fighters from Universe 2 and Universe 6 have been eliminated, and the Zenos begin to erase their universes.

On the Toonami Faithful Podcast, we conducted a special ladies-only episode marking the first time in the podcast’s history. Hosted by Happy Kuro Kitty, she was joined by Director of Social Media Celia Rose and Editorial Writer Umeko Long. The ladies discussed the first 12 episodes of Food Wars and what made the show work, and what it does that is a bit off-putting. However, most episodes revolve around Toonami and gender representation, both at what the block has done well and what it could do to improve that! It’s a monumental episode and a format we hope to continue every month!

Staff writer Sakaki had a recent article published talking about one of the more emotional moments in Fire Force, where Sister Iris questioned her faith. Sakaki dove into the mindset about questioning faith and how complex a topic it can be even to mention. It is a wonderfully written piece that goes into unique details about how humanity falters with and without faith in something. It is a must-read for those who enjoy our editorial articles and one that Toonami Faithful is proud to present!

Our friends and staff members from the Demon Slayer Podcast invaded the Manga Mavericks podcast this week! Varun “VLordGTZ” Gupta, Marion “microwaevy” Pena, and Sakaki sit down with hosts Colton and LumRanmaYasha as they had a retrospective of the hit manga series Handshakers (Just kidding, it was about Demon Slayer). The group discusses the series’ massive rise to popularity and the themes that have taken the world by storm! Give it a listen if you are a huge fan of Demon Slayer because you will not want to miss the insights on this episode!

Toonami Faithful staff member Colt Buhr recently announced why our regular rating postings hadn’t been published. The standard means to acquire the traditional viewing numbers all have lost access to grab them, leaving Buhr with no option to continue these weekly articles. If anything changes, he will be more than ready to jump back into keeping track, but these postings will not happen for the foreseeable future.