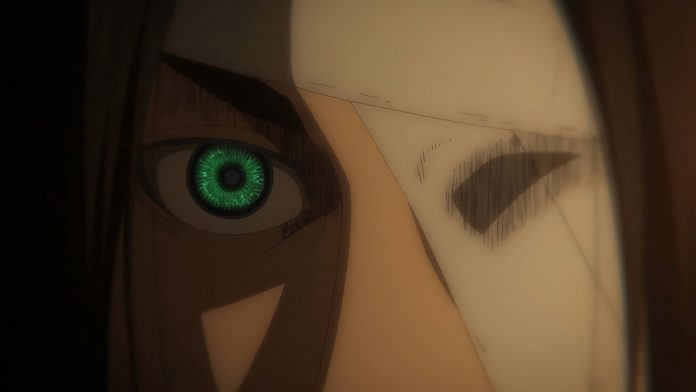 Last week’s episode left us with the mind-blowing cliffhanger of Eren revealing himself as the wounded soldier Falco built a friendship with over the previous episodes. Eren states that it’s been four years while Reiner looks at him in disbelief, with Falco wondering what was wrong since these two were old friends and the reunion was to be a surprise. Eren makes Reiner aware of their location under an apartment building behind the stage where Willy Tybur will announce to the world and tells Falco (with Reiner telling him to do as Eren says) to stay when he tries to leave. Falco notices Eren’s hand has been cut, which he refers to as a scratch, without knowing this could cause a titan transformation at any moment. Is Eren indirectly holding the families in the apartment building hostage to keep Reiner from alerting anyone? If this is the case, this is a significant change in Eren’s morality with his disregard for others’ lives. Reiner asks Eren why he is back and what he plans to do, with many concerned thoughts racing through his head. Eren coldly answers, “the same exact thing you did,” which leaves Reiner (as the kids say) “shooketh.” It was at this time where both Reiner and myself had an “oh crap” moment since both weren’t sure what Eren meant, but I knew it wouldn’t be good.

Willy Tybur takes the stage to begin his theatrical performance re-enacting the titans’ history, including the Great Titan War that drove King Fritz to Paradis Island thanks to the Marleyan hero Helos and the Tybur family. King Fritz didn’t go to the island empty-handed as he took tens of millions of titans with him, so the threat of an all-out war remains, which is why Marley sent four warriors to the island to retake the Founding Titan. Sadly for Marley, only one warrior returned alive, proving the island is a formidable opponent to the world. Willy confesses this history is not entirely accurate based on the memories passed down from the War Hammer Titan, showing King Fritz as the true hero ending the Great Titan War. King Fritz felt an immense amount of guilt for the pain and destruction the Eldian people caused throughout its history. When King Fritz inherited the Founding Titan, he and the Tybur family created the hero Helos to be responsible for the King’s downfall to go to the island with as many Eldians he could bring to live in peace. King Fritz declared he would unleash titans if his peace was threatened on the island but had no intentions of following through with this threat. His vow of renouncing war has been passed down through generations of the royal family, explaining why the titans from the island haven’t attacked.

Willy’s revelation of the truth surprised me because the Tybur family was responsible for fabricating Marley’s history and did nothing. At the same time, Eldians were put in internment zones to atone for their past. The Tybur family reaped the benefits of this fabrication while many people suffered, and Willy’s ancestors had no desire to tell the truth, which I found to be selfish. King Fritz erased memories and created this belief of Eldians being the last of humanity living inside the walls. And if people questioned this history, they’d pay for it with their lives. King Fritz also willingly changed the name of the royal family to maintain the peace he desired. It begs the question if the King kept these truths from its citizens to keep Paradis Island from attacking the world or if he had an ulterior motive for keeping Eldians oppressed.

Now that Marley knows the truth, how will this nation move forward? We quickly find out as Willy answers this question informing the audience (filled with world leaders) the Founding Titan was stolen by Eren Jaegar, who isn’t of royal blood. So Eren didn’t inherit the vow of refusing to be at war. Willy discloses that Eren was able to use the Founding Titan’s power, meaning he could unleash the millions of the titans in the walls to destroy the world (which is referred to as a “rumbling”). At the end of season two, Reiner mentioned to Eren, commanding titans as “The Coordinate,” but Eren is still unaware of how to use this power. But this doesn’t stop Willy from letting the world know the threat he poses. That threat is why he’s asking all nations to come together as one to fight Paradis Island to prevent this rumbling from taking place. I’m curious to know if Eren has the ability or desire to control this power to unleash this rumbling. With his attitude changing and the statement of killing his enemies at the end of season three, I have to admit Eren possesses the desire to make this rumbling happen.

Eren and Reiner have a separate conversation as the performance (about the titan’s history) is taking place. Eren agrees with Willy about being a threat by calling himself the “bad guy” that could destroy the world. Eren admits viewing Reiner, Bertholdt, and Annie as the bad guys while watching his mother being eaten by a titan. Eren grilled Reiner with several questions focusing on his mission and why a titan devoured Eren’s mother. Reiner would reply sternly about how his group planned to use the chaos to allow other members to enter Paradis and how the King of the island would react, as well as trying to save the world by retaking the Founding Titan to Marley. Eren begins to show sympathy by telling Reiner that their warrior training includes brainwashing and hatred toward the island, so they didn’t know any better. Reiner falls to the ground blaming himself for Eren’s mother being eaten. He convinces Annie and Bertholdt to continue instead of returning to Marley after losing Marcel and even asks to be killed for this decision. While helping Reiner from the ground, Eren tells Reiner that he’ll keep moving forward to destroy his enemies, which triggers the beginning of his transformation into the very threat Willy mentioned. Reiner turns to protect Falco as Eren erupts with our hero killing Willy and throws his mangled body in the air.

Another week of fans leaving with a jaw-dropping cliffhanger! Eren killed the person who proclaimed war on the island, which viewers can see as our heroes accepting the war coming their way. With Eren transforming into a titan, does he plan on killing everyone in attendance? Is the Scout Regiment coming to assist him? I’m flabbergasted at Eren’s transformation into this person who is willing to kill humans when titans have been his life long enemy. But the thing that sticks out (especially with the Toonami audience) is how fans get the first look at the English dub of some of the more intense moments this season. Seeing Reiner and Eren stare each other down in the previous episode and seeing Eren transform now in English gave me goosebumps. Both Bryce Papenbrook (Eren) and Robert McCollum (Reiner) have been the highlights over the past few episodes, as they convey the emotional appeal that should grab any Attack on Titan fan’s attention. You could feel the anxiety McCollum conveyed when confronted by Eren. And the cold-hearted demeanor from Papenbrook was something I was not expecting due to how Eren is as a character. It has been spectacular, and I cannot stress enough how impressive this English dub has turned out. More about the story, I ended last week’s review wanting to see if this confrontation would be peaceful or hostile, and it turned out to be the latter, so we’ll see how far Eren will go in Marley.