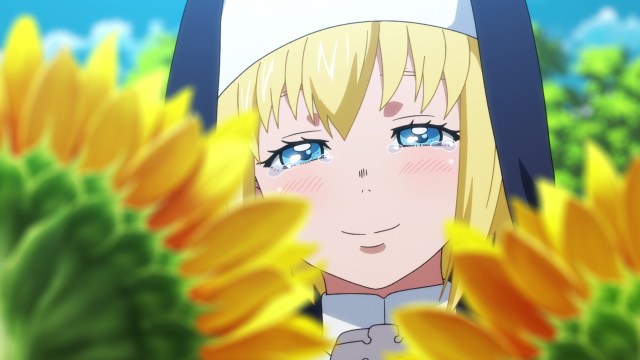 What is faith? Belief in the unknown? Or a miserable pile of secrets? References aside, it is a question that we as a society have wrestled with for our entire existence, so it’s no surprise our media has also gazed up at the sky and wondered just what faith is. Or to dig deep, what are we supposed to believe in for ourselves? I’m afraid I don’t have the answers to those questions. That being said, the pursuit of knowledge can be just as meaningful since answers can come from everyone and everywhere. That’s right, even Fire Force.

The supernatural shōnen Fire Fighting series has been the target of praise due to its animation and (rightful) criticism in how it handles fanservice. However, season two of the series caught my attention, and it had nothing to do with flashy fights or titillation. Instead, the series asks a poignant question of what to believe in when one’s whole set of beliefs, their cores, are shaken by tragedy and the often unkind machinations of reality.

Fire Force is at its heart a shōnen battle manga. I’m not at all suggesting anything more or less in this writing. As we know, these works are more different in their execution than thematic narratives. Yet Fire Force has an underbelly of unease creeping from the beginning,unlike some of its contemporaries. That’s perhaps not all that surprising coming from Atsushi Okubo: the man who brought us Soul Eater, with all of its style and delves into the maw of madness. However, the difference in Fire Force comes from the character’s beliefs in a fundamental system that’s supposed to uphold a sense of order even in chaos.It gives form and consequences from straying from the right path in the face of an otherwise uncontrollable, unknowable, and most of all ever,-encroaching evil. That’s right; Fire Force has religion! That’ll keep that devil at bay! And yes, I realize the irony of saying this when the protagonist of the series: Shinra Kusakabe, is often referred to as a “devil” and “dark hero.” Perhaps this too, is part of Okubo’s mad plan. After all, he is a Berserk fan, and where there’s faith there’s also the “Idea of Evil.” Though a good friend has written all about Berserk, I’d recommend you read their writing for that and leave the pointless references to me. I have faith in my ability to relate the unrelatable, after all! Though in all seriousness, it is fascinating how both Fire Force and Berserk take very similar ideas and utilize them in character studies and narrative focus.

Just as humans have struggled with the idea of faith in perpetuity to make sense of the world, we’ve also had the misfortune of realizing that believing in something isn’t a band-aid that makes things all better.The sting of when that band-aid is ripped off may hurt more than what it’s supposed to cure. The characters learn this all too well when the Evangelist, the very being akin to God in the world of Fire Force, is revealed to be the agent of destruction they are fighting bitterly against throughout the series. Lives have been lost or ruined, loved ones twisted painfully, and worst of all, they just found out they’ve probably picked a fight with God. Talk about reasons to look for alternative scripture!

This issue is the question Episode 18 of Season Two poses after tiptoeing around it the entire series. Iris, who as a nun of the Holy Sol Church has put her faith in the Evangelist to work as a nun for Company Eight, and furthermore to give reason to her suffering after losing her convent to the hands of an infernal. The existence of something higher than herself has been her strength; strength has been ripped from her with it being connected to the villains they fight. Then what is there to believe? Who should believe, and what should they think? What’s dangerous about belief in a thing or person is the perhaps inevitable likelihood that they will let us down. If that system, being, or idea should falter, then it throws the believer into a sense of existential turmoil. What to believe in now? Who? And if one has been wrong about something like this, what else have they been mistaken about? That’s right; Iris is having a full-on “dark night of the soul.”

To briefly discuss this point before moving on: A “Dark night of the soul,” despite its name, is a fairly relatable subject: It is, in short, an existential crisis after a traumatic event. Aside from its cooler, edgier, and more shōnen appropriate naming, the difference is this is not a crisis that attacks the mind but the soul itself. Appropriately enough, it has religious origins in the Roman Catholic Faith as a “spiritual depression.” Which fits what the characters in Fire Force are going through perfectly. To struggle, to devote oneself to, to have faith in will undoubtedly lead to a crisis of the soul. It is a perceived collapse of meaning in one’s life. How does one pick themself off the ground when they are forced to look at the shattered remains of their very psyche?

Fire Force doesn’t answer this question. You could even argue that it doesn’t try to, and honestly? That’s fair. This isn’t a question or topic that Fire Force can be neatly resolved in 24 minutes of airtime or even an entire series. Instead, it reaffirms a vital fact that despite all of these shōnen anime sometimes literally beating it into us week after week becomes easy to forget when weathering life and its ups and downs. We are not in this alone. Shinra’s answer to Iris when she wonders if she’s only an accomplice to a religion that is not only not saving people but is actively killing them is that he needs her. In his work as a part of company eight, he has to take the lives of infernal people to prevent them from taking even more lives. This fact weighs on him heavily every time he goes to work, even if it is for the good of many. Still, it is because she acts in her role as a sister who absolves the departed of their worldly sins that he can continue to do his job, to serve in a position he had chosen for himself. He can only carry on because he has faith in her, who decided to have faith in others in taking on being a nun. It’s because she clasps her hands and gazes up at the sun that he and their friends know there is a reason to keep going.

“So wait, aren’t you contradicting yourself? Having faith in others is okay now?” Something I’m sure readers are wondering, but it isn’t that clear cut. Not much in life is. Faith isn’t an easily divisible thing that if one gives just enough to someone else, they won’t be hurt if it is broken, but there most certainly is having too much faith in an idea or person. Fire Force may be a little optimistic in its “conclusion” on the matter (I hesitate to call it that since the series is ongoing and very much still grappling with this inquiry, but as far as anime viewers know, this season might be it.) But I think it comes from a good place. Seeking and validating faith is never a bad thing. Questioning your faith can lead to a much more profound connection to it and what you believe in as a person. It’s subtle, but I also like that Shinra didn’t outright say, “believe in me!” Instead, he defers that sense of belief to Iris. It’s not that he’s saying “don’t believe in me” either, but he states what he thinks, which is that he has faith in her. If that becomes faith in him, so be it, but he’s not demanding of it either. It’s the little things like this that make this moment special to me. Rather than a heat of the moment declaration of badass proportions, it is a quiet conversation between two individuals where honest feelings are conveyed. It’s because shōnen series typically use bravado to express themselves that quiet moments like these are endearing to me, especially dark night of the soul type moments like this.

I apologize if this wasn’t the theological validation you were hoping for, and I appreciate your faith in me in reading this far. It’s a funny thing to believe in something, isn’t it? We have likely been hurt by those very beliefs and perhaps will be hurt again, but people choose to keep trying, believing in something regardless of this: in short, the human condition and what makes us unique, and dare I say, wonderful. Our media touting this lesson in countless forms speaks to the nature of our hopes and thoughts as a society. So from one hopeful faith having a human to another, let’s all get on our knees and praise the anime providers above (or, well, mainly to the side) so that they will take our beliefs and perhaps kick a third season of Fire Force down the pipeline someday. Until then, let’s keep the faith alive.

Sakaki is an editorial writer for Toonamifaithful.com and the Editor-in-Chief for Weekly Shougakukan Edition. You can follow Sakaki on Twitter @kiirobon.