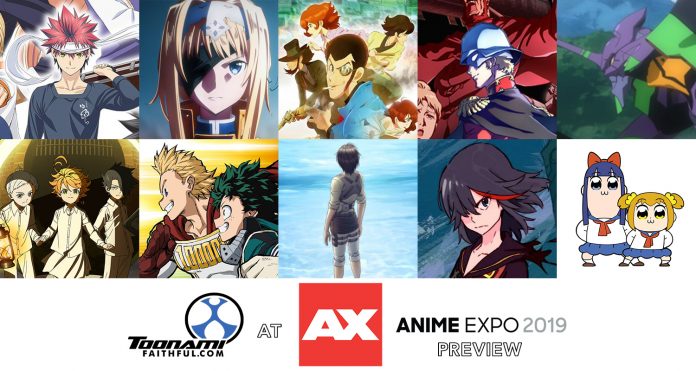 There will not be an official Toonami presence at AX this year, but there will be plenty of panels and events for Toonami fans to enjoy and perhaps to watch out for in regards to future announcements. My Hero Academia will be having a world premiere of the first episode of the highly anticipated season 4. Lupin the Third will be premiering dubs of the specials Goemon’s Blood Spray and Fujiko’s Lie. Gundam will commemorate its 40th anniversary. Evangelion will be previewing 10 minutes of the upcoming 4.0 movie. The Promised Neverland will have a panel to recap season 1 and look forward to season 2. Sword Art Online will have a panel to commemorate the first half of Project Alicization and to preview the upcoming second half. And with Sword Art Online heads to its offseason in 2 weeks, and with more shows still to come and return, we might just hear what Toonami has planned coming up in the near future.

Hand-picked from the official schedule, these are some of the upcoming panels that are related to Toonami (including shows that have previously aired on the block as well as the block’s various partners), and if you’re going to AX this year, we definitely recommend you checking them out (or at least what you can), whether it’s for looking forward to what’s next, hanging out with the creators and other fans, and if nothing else, enjoying just being there. And even if you’re not going this year, we’ll be keeping an eye on what comes out of these panels for any news regarding the future of Toonami and the block’s various programs. For those that aren’t going this year on the other hand, fear not, as AX will be live-streaming panels that take place in the Petree Hall/Live Programming 1 on twitch.tv/animeexpo and facebook.com/animeexpo.

For any potential breaking news, make sure to follow @ToonamiNews as well as our other social media outlets. This year, yours truly will once again be teaming up with CJ Maffris, @Sketch1984, @HappyKuroKitty, @AlienRenegade, @VLordGTZ, and @LumRanmaYasha to cover the show floor this year, livetweet some of these below listed panels, as well as covering potential breaking news and trying to get you some exclusive interviews among other things, so feel free say hi if you run up to us.

Do note that there is a possibility that there can be Toonami related news that can appear in panels that aren’t listed below, so all I can say is to keep on your toes. This schedule list will be updated if more information becomes available.

Official Description: Returning for a 3rd time, join some of the top voice actors in LA and moderator Jeff Burns for another fun panel full of stories, history and as per tradition a cold reading of a script from our talented cast, including Abby Trott, Dave B. Mitchell, Frank Todaro, Jamieson Price, Jason Marnocha, Karen Strassman, Keith Silverstein, and Mona Marshall. Hosted by Jeff Burns.

Chillin' With Voice Actors returns to @AnimeExpo this year on Wednesday July 3rd from 6-7:30PM in Petree Hall (and Livestreamed on Twitch). Look forward to one of the biggest & best panels we've done yet.https://t.co/QYbNPaOoLe

Official Description: Wanna know what goes into creating award winning dubs like Mirai, Your Name, A Silent Voice? Join Michael Sinterniklaas and the NYAV Post team and find out what’s next.

Join @MSinter and @stephaniesheh on July 3rd @ 7:30pm for an NYAV Post panel at Anime Expo!

🚨 🚨 🚨 We’ll be screening exclusive outtakes and handing out giveaways!

Official Description: Join VIZ Media as we talk about some of your favorite titles like NARUTO, ONE-PUNCH MAN, SAILOR MOON and more. We’ll also be making announcements and chatting with Joey The Anime Man and an incredible team from Powerhouse Animation, the studio behind the CASTLEVANIA anime. You won’t want to miss this.

So You Want To Be An Anime Voice Actor?

Official Description: You love watching anime, but have you ever wanted to VOICE an anime character? Learn the ins and outs of voicing anime directly from some of the best voice actors and producers in the industry during this interactive panel! Hosted by Cassandra Lee Morris, Cherami Leigh, Jamie Marchi, Kyle McCarley, Lisa Ortiz, Michael Sinterniklaas, and Xander Mobus.

Notes: Do titles like The Promised Neverland, Sword Art Online, and Cells at Work! make your otaku heart skip a beat? Then you don’t want to miss the Aniplex of America Industry Panel! Join us as we bring you the latest news on all your favorite Aniplex shows and score some free gifts!

With Anime Expo® 2019 only one week away, we're taking this #TBT to look back at last year Anime Expo booth!

We hope everyone is excited to see what we have in store for Anime Expo this year! pic.twitter.com/zKLONbhZa5

Official Description: Come one, come all – Sentai Filmworks has some secrets to share with you. Prepare yourself for some special announcements, sneak peeks and maybe even a giveaway (or two or three…).

Notes: Sentai will be making its return to the better cartoon show with the premiere of Food Wars! (Shokugeki no Soma) the following night, July 6 at 1 am Eastern.

If you're going to #AnimeExpo mark your calendars for these panels — you'll find us in the audience! 😍

The Promised Neverland at Anime Expo

Official Description: Aniplex of America invites you to fight your destiny in this world with The Promised Neverland event at Anime Expo. Join special guests as we explore the show Anime News Network calls “the must watch series of the year.”

Notes: Toonami has just completed the run of Season 1 yesterday (as of this posting) and a second season has already been greenlighted, set to be released in Japan sometime next year. Neither Toonami nor Aniplex have announced what their plans are regarding the dub and US broadcast for season 2 as this time.

Plan your escape from Grace Field House with The Promised Neverland Special Panel at @AnimeExpo!

Join us and our top-tier panel of Special Guests which includes guests from the Japanese and English voice cast as well as Director Mamoru Kanbe! pic.twitter.com/j3JP8nfOBn

Official Description: Join the A-1 Pictures team for an insider look into one of the most popular anime studios in Japan, responsible for many hit shows including Sword Art Online, Blue Exorcist, and more! Don’t miss leading industry professionals sharing behind the scenes stories, plus the latest news on upcoming projects!

Official Description: The series of “Mobile Suit Gundam”, which was launched in 1979, marks its 40th anniversary in 2019. We would like to look back at the history of Gundam up to now and talk about Gundam’s future by inviting its creator and producer from SUNRISE as guests. We offer raffle giveaways at the end.

Notes: Mobile Suit Gundam: The Origin will be making its premiere on Toonami on the following night, Saturday July 6 at 3:00 am Eastern.

Official Description: Join the fun with Maki Terashima-Furuta as she discusses the current and new titles in production and development, shows the exclusive footage and trailers of the new projects, and introduces special guest(s). Lots of giveaways and swags to follow.

Official Description: Interested in how Anime Music is produced? Meet special guest GIN(BUSTED ROSE) the “POP TEAM EPIC” Sound Producer to learn crazy secrets about the creation of music!! Dive in the creative process of the dope sounds and you can be the first to know exclusive behind the scenes secrets.

We will have special raffle prizes for the attendees. *Only a limited number available.

Official Description: Join Arc System Works producer Takeshi Yamanaka as we explore how an idea goes from concept to paper through the video game KILL la KILL – IF. Featuring a live drawing session with Studio TRIGGER guests, Hiromi Wakabayashi and Shigeto Koyama, this is a panel you DO NOT want to miss. We heard there might also be a very special secret guest…!?

Official Description: Learn how to be a real hero as we discuss this hit anime series with Kaori Nazuka the Japanese voice of Toru, English voice actors David Matranga (Todoroki), Ricco Fajardo (Mirio) and Patrick Seitz (Endeavor). Prepare to go Plus Ultra! as we premiere new episodes for Season 4 and more!

Notes: Due to the anticipated high demand, Anime Expo will require all attendees to pick up an admission wrist band to enter this panel. Admittance is free and guarantees you entry once received, but wristbands are first-come, first-serve, and are non-transferable (wristband cannot be removed or tampered). Further information can be seen by clicking here.

Official Description: Sailor Moon Day is back and packed with even more glitter! Join your friends from VIZ Media as well as many members from the staff and cast of Sailor Moon and Sailor Moon Crystal for a festive time filled with news, updates and more from everyone’s favorite Guardian of Love and Justice. All attendees will receive a special treat while supplies last, so, in the name of the Moon, don’t miss it!

Official Description: LUPIN THE III RD series follows the events after The Woman Called Fujiko Mine. Highly praised for its striking visuals with emphasis on the more mature and slightly darker themes, Goemon’s Blood Spray and Fujiko’s Lie shed light on different sides of Lupin and his gang.

Notes: This is an 18+ Panel. The panel room will be cleared before this event. Attendees who attend this panel must have a wristband. Click here for more information.

Official Description: Hang out with the English language editors of the world’s most popular manga! We’ve got exciting news about the LATEST developments on new series, all-time fan favorites, and what we’re doing to bring you the world’s best manga! We’ll also have amazing prizes up for grabs. Don’t miss it!

Official Description: Join the original Sailor Moon editor, Fumio Osano (affectionately known to creator Naoko Takeuchi and to fans as “Osabu”), producer Junichiro Tsuchiya, and staff from Kodansha Comics as they discuss the Pretty Guardians and the new Eternal Edition of the manga. Freebies and prizes, too!

Official Description: Hear about all the latest and greatest anime & manga coming out of Crunchyroll straight from the source.

Official Description: Aniplex of America welcomes special guests director Manabu Ono and character designer Shingo Adachi for the Sword Art Online Alicization Special Event at Anime Expo! Join us for a very special talk as we look back at the first half of Alicization ahead of War of Underworld in October!

Notes: The penultimate episode is scheduled to air later that night, with Toonami reaching the mid-season finale the following week. While it is expected Toonami will air the 2nd half of Project Alicization, neither Aniplex nor Toonami have officially revealed anything about the respective dub as of now.

Join our star-studded roster of Special Guests for an exclusive talk as we look back at the first half of Alicization ahead of War of Underworld in October! #AX2019 pic.twitter.com/xdvfRcahtc

Official Description: Set sail with One Piece as we celebrate the 20th Anniversary of the anime. Join us as we discuss this epic anime with voice actor Patrick Seitz (voice of Franky), VIZ Media, Bandai Namco and other special guests. Plus, we’ll show never-before-seen videos, have Q&A with guests, giveaways & more.

Are you headed to Anime Expo this year? If so or if not, what news and announcements are you anticipating? Sound off in the comments below or on our social media outlets.