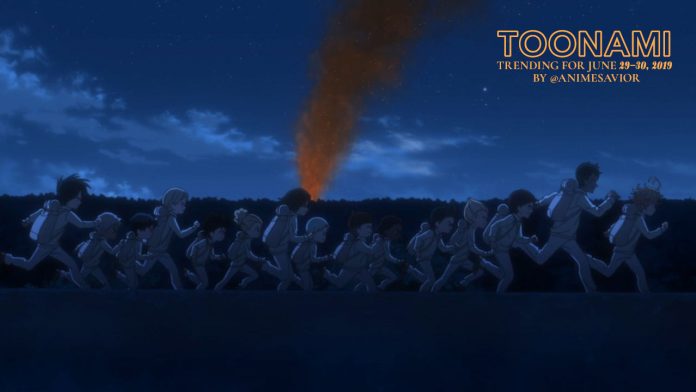 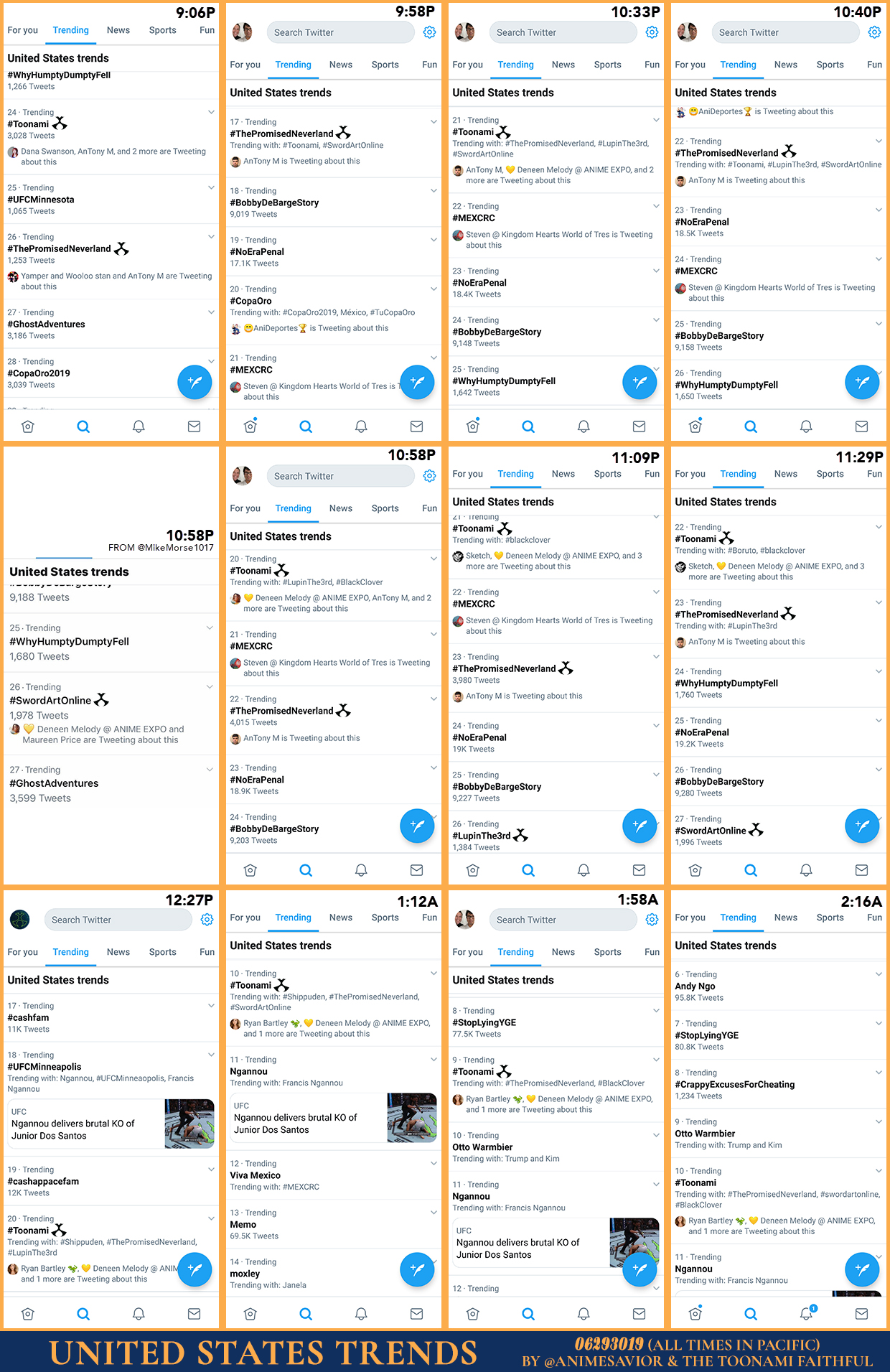 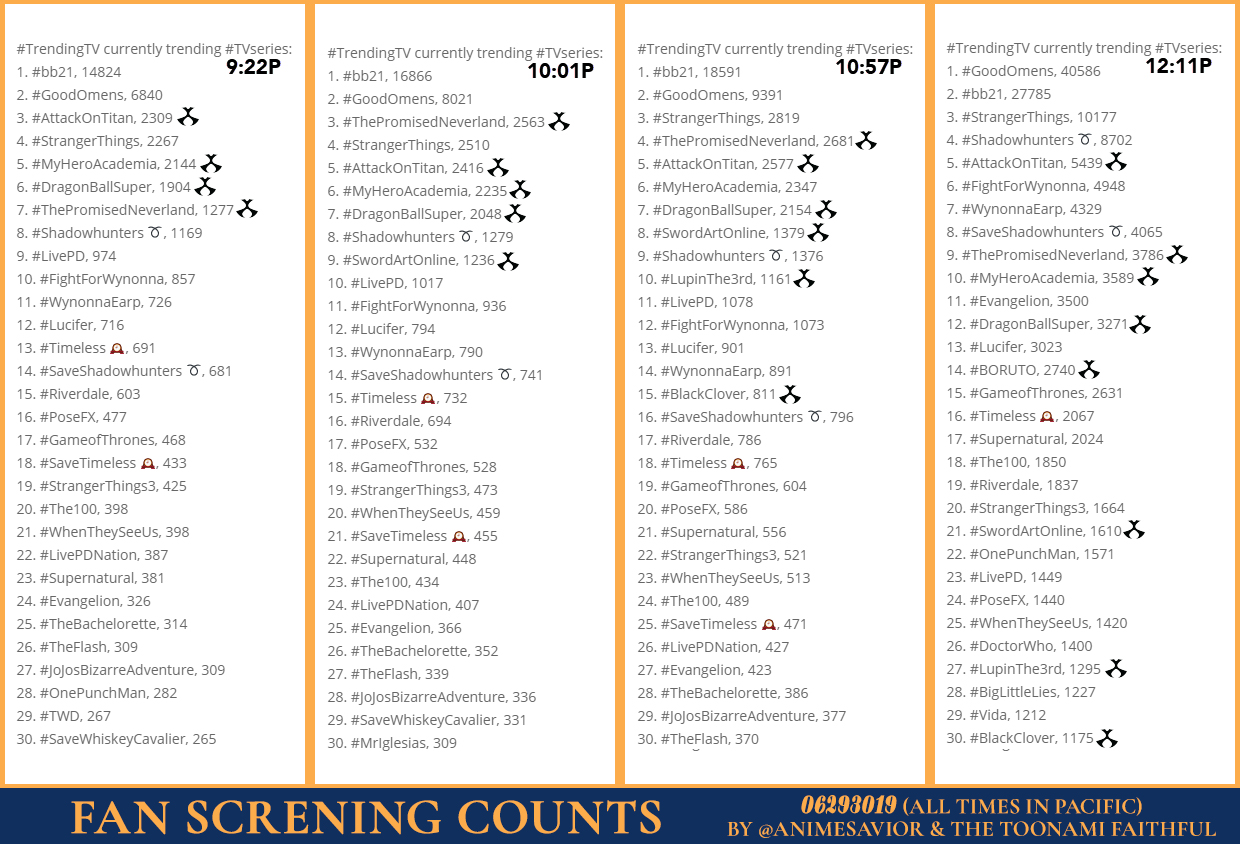 “I guess that’s it then. It looks like I’ve lost. Run children, and be careful. I pray that one day, you can find true happiness and light.”

The Toonami Trending Rundown for June 29-30, 2019. We reach the season finale of The Promised Neverland as the kids of Grace Field House implement their big escape. Meanwhile, among other great moments, Kirito, Eugeo, and Alice begin their big battle against Quinella, while Levi has to choose between saving Armin or Erwin, and Kakashi tests Boruto and his class with his famed bell exam.

On Twitter, #Toonami would trend in the US along with The Promised Neverland, Sword Art Online, and Lupin the 3rd. Black Clover, Boruto, and Shippuden also trended alongside these shows, but not outright. On tumblr, #Toonami trended alongside The Promised Neverland and Attack on Titan (including SNK). The full list including statistics and tweet counts from the twitter app and Amr Rahmy’s Fan Screening analytics app can be seen below. 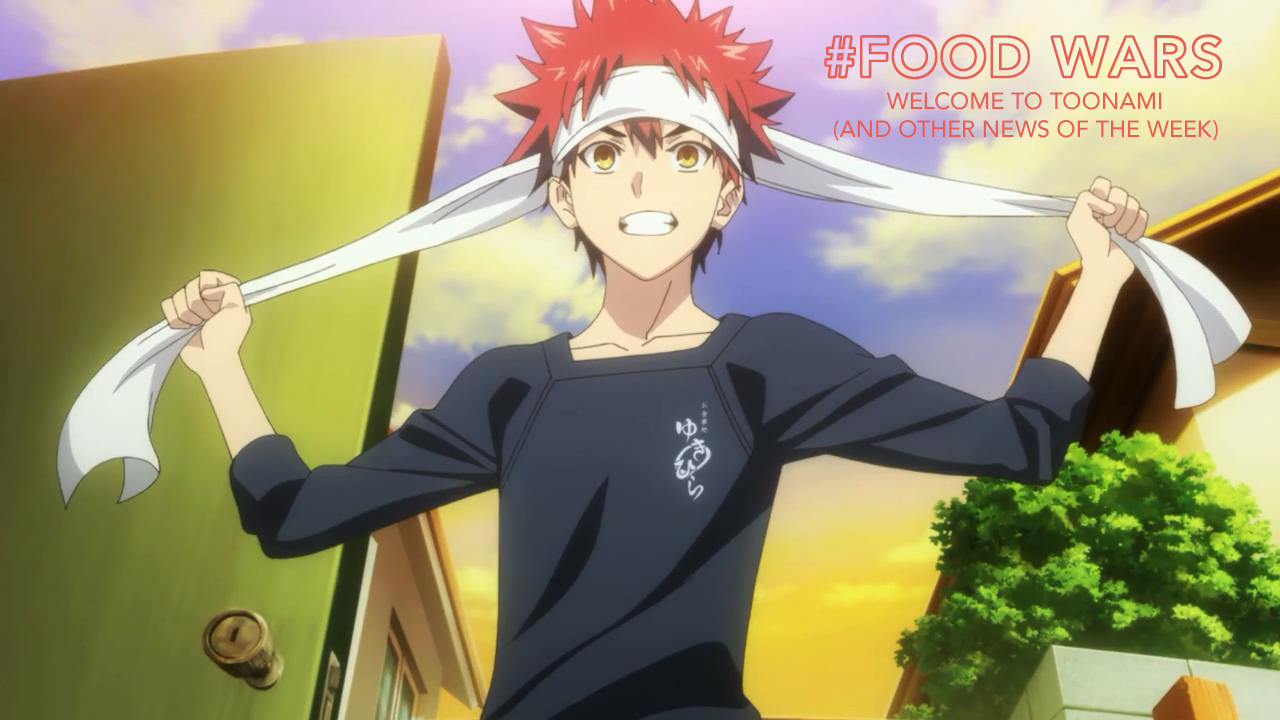 To showcase that Toonami is indeed serious with airing more genres of anime, Toonami announced on Thursday that they have partnered up with Sentai once again, this time to bring in the hit anime series Food Wars, also known as Shokugeki no Soma, beginning next Saturday June 6 at 1:00 am Eastern. This will be Sentai’s third licensed franchise that has aired on the better cartoon show, and the first since Parasyte completed its run on April 9, 2016.

Based on the hit Shonen Jump manga series by Tsukuda Yuto and Saeki Shun, and well known for its food recipes and fanservice, Food Wars has become a hit manga and anime series with 315 published chapters and counting, and 3 seasons, with a 4th incoming this fall. The first two seasons have already been dubbed, and we can assume Toonami will be airing those seasons at the very least, though there is the possibility that Toonami could be dub-premiering seasons 3, 4, and beyond once Sentai gets to them.

Food Wars’ addition and Gundam’s return will come with yet another schedule change, which you can see below. The change did come with come controversy, as My Hero Academia went from going from the start of the block, to the end, which is quite a jarring shift to say the least. Although with AOT and SAO both headed into their respective off-seasons within the next few weeks, don’t be surprised to see more schedule changes ahead.

During this week’s Toonami broadcast, the trailer for Food Wars was revealed, which you can see below.

During the season finale airing of Attack on Titan in Japan, with Hajime Isayama beginning to wrap up the series pretty soon, it has been announced that the 4th season of Attack on Titan will be the series last. The fourth season is set to premiere in fall 2020. Of course, we still have 4 more weeks to go until we reach the season 3 finale, which is scheduled to air on July 27. We’ll see where this franchise goes ahead. 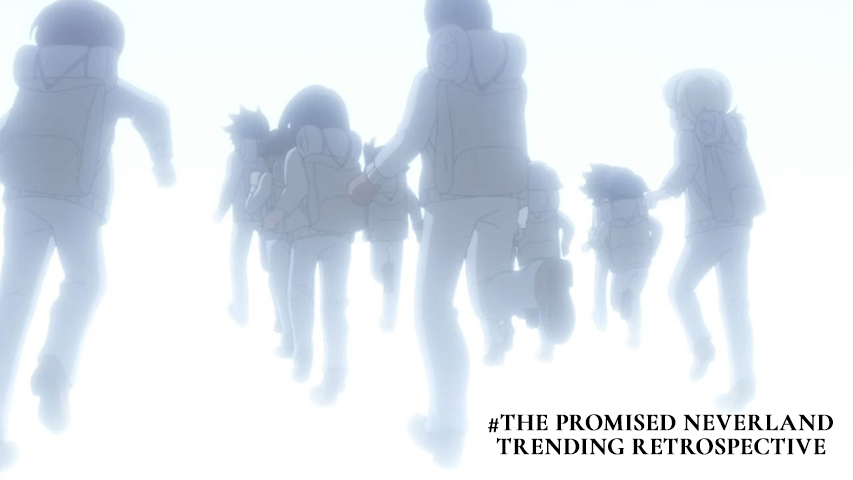 One of Toonami’s first ventures into airing anime outside of the battle shonen/seinen demographics, The Promised Neverland is not your ordinary Shonen Jump title. In a world where demons rule and humans are raised in a farm to be eaten, Emma, Norman, and Ray’s quest to use their wits and escape from this fate and break the cycle has been quite the journey.

Despite being a huge hit during the Winter 2019 anime season and a highly requested show for Toonami to air, some thought The Promised Neverland wasn’t destined for Toonami with its aesthetics being possibly off-putting to viewers, and the thoughts at the time that Aniplex’s relationships with Toonami were deteriorating. But as Aniplex made its return to the better cartoon show with the return of Sword Art Online, TPN’s hopes of returning to Toonami looked more and more likely, and on March 28, Toonami and Aniplex announced that The Promised Neverland would indeed be headed to the better cartoon show, which it began its run on April 13, running 12 straight weeks through last Saturday. 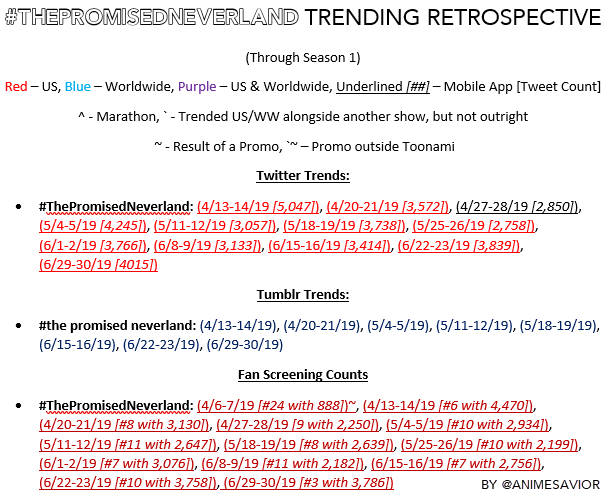 This won’t be the end of Emma, Norman, and Ray’s journey, as Aniplex and CloverWorks are already hard at work creating the 2nd season of The Promised Neverland, which is scheduled to air in 2020. And as manga readers will tell you, it’s gonna be quite a journey ahead. 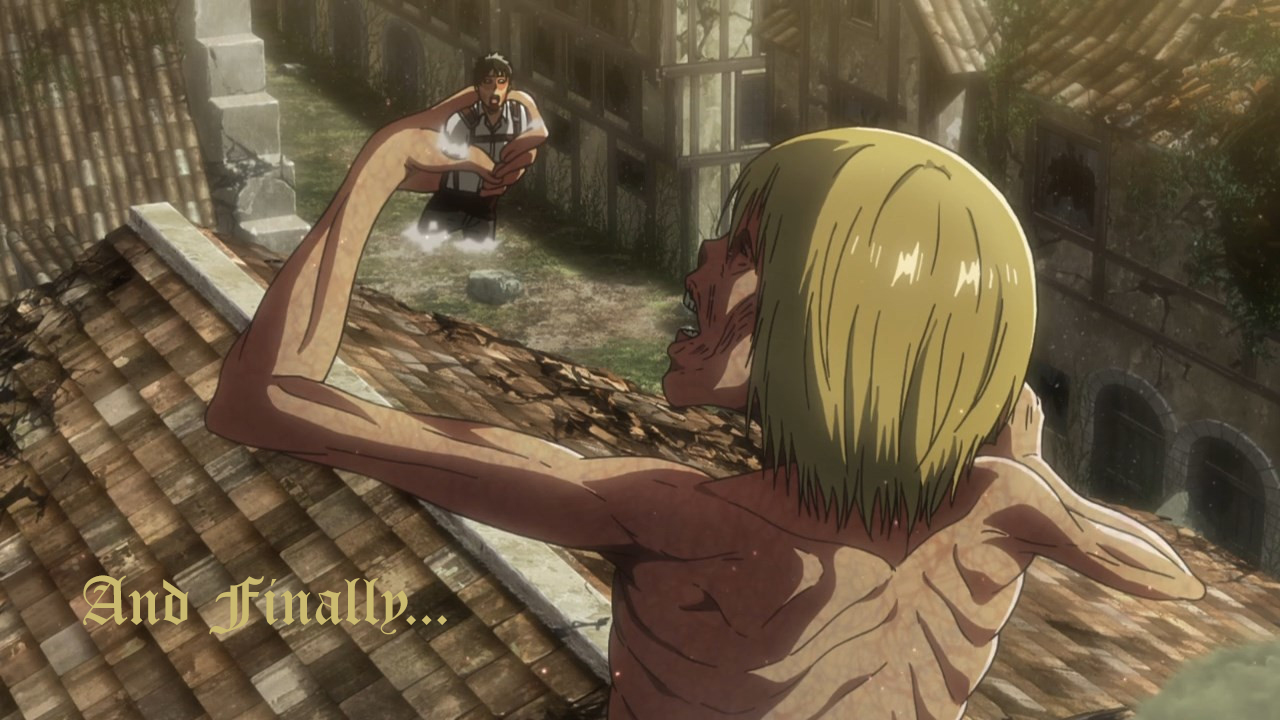 Next week, I’ll be at Anime Expo with other members of the Toonami News crew to help you get the news and events of all things Toonami. With a big schedule planned, I just released the schedule of what to watch for in regards of events of interest for the Toonami Faithful to enjoy and to look out for in regards to what could be next for the better cartoon show. For those also going to the LACC this week, I hope to see you around the convention halls. And of course, tune in next week for the premieres of Food Wars and Gundam The Origin, as well as the penultimate episode of part 1 of Sword Art Online Alicization, among other great moments. Until next week, have a Happy 4th of July and stay gold.

Special thanks to @MikeMorse1017, @myanimewaifu and others I forgot to mention for spotting some of the trends on this list. 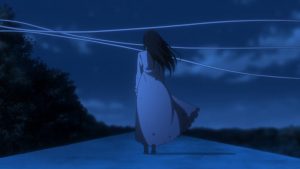