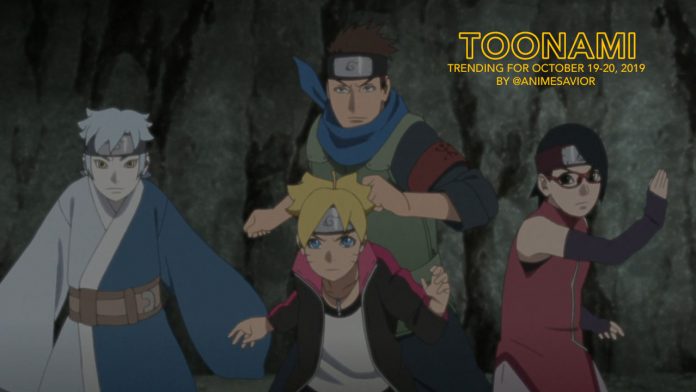 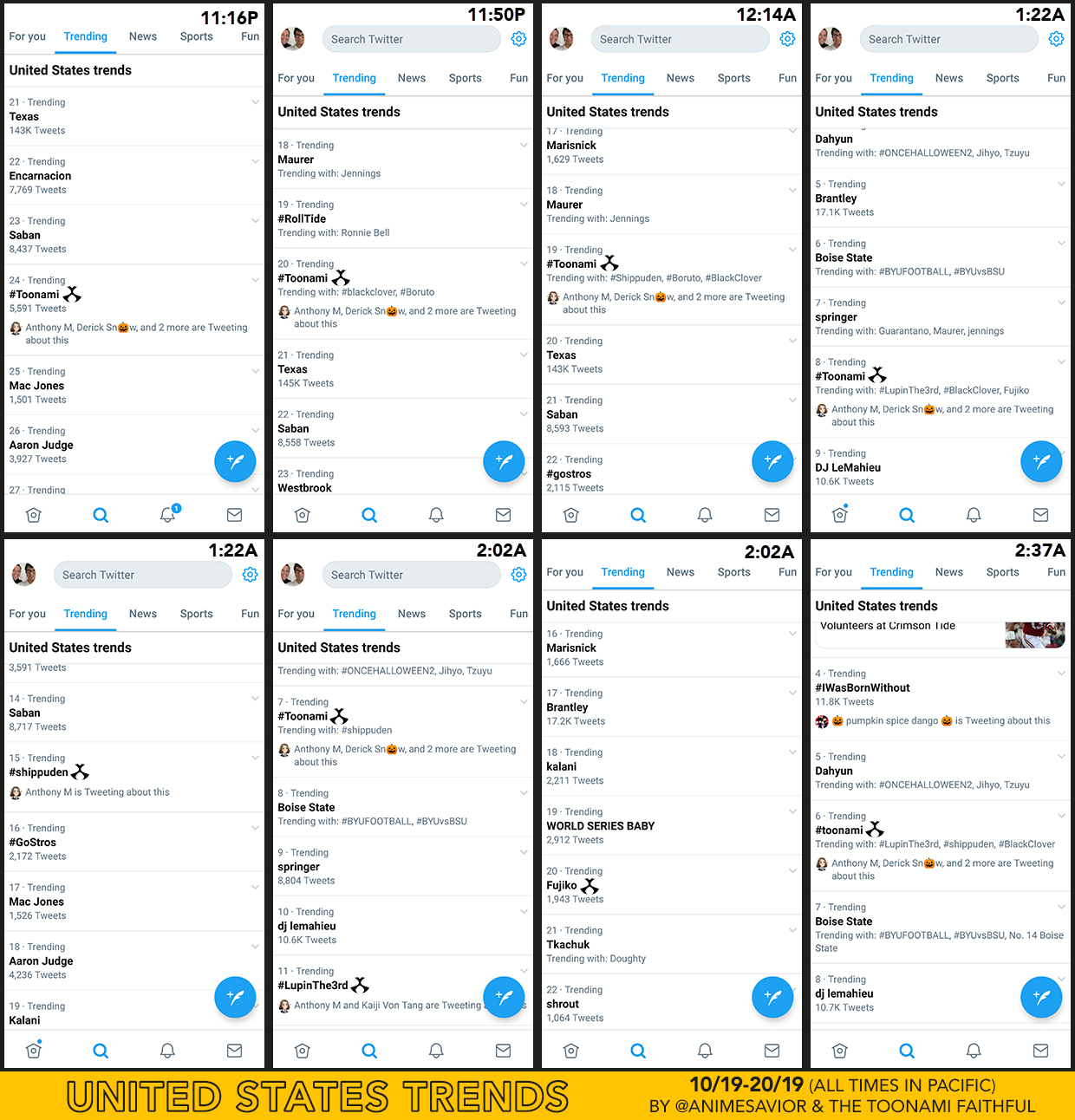 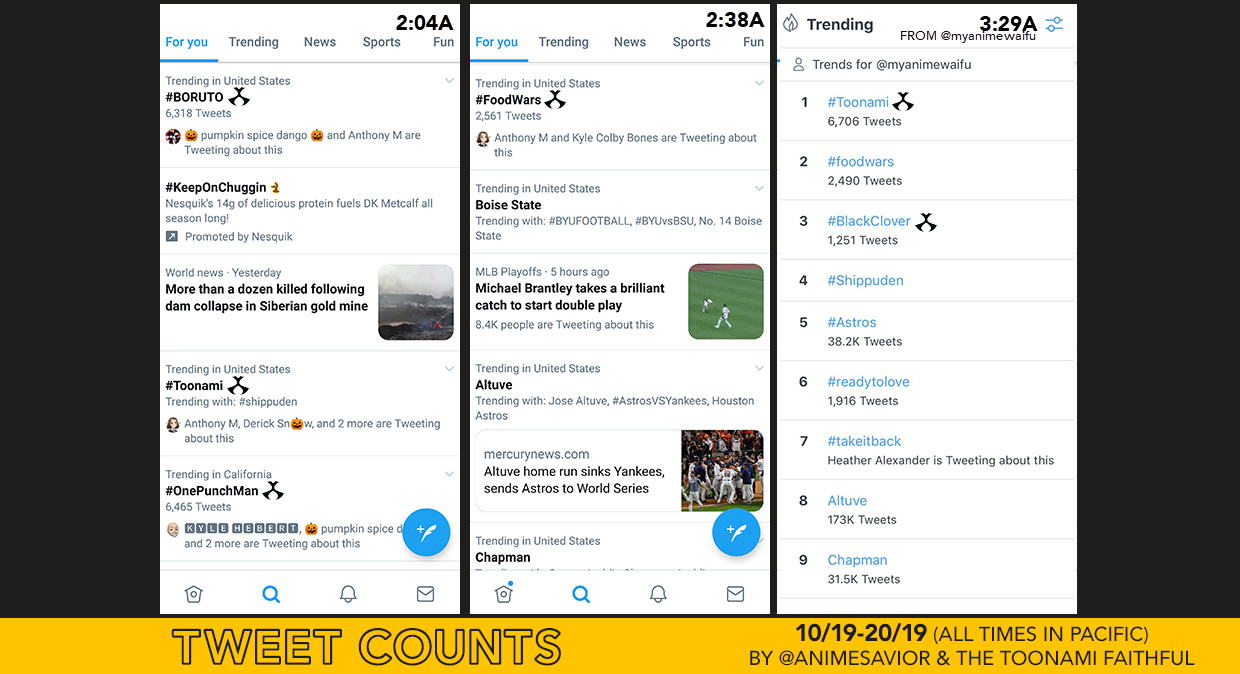 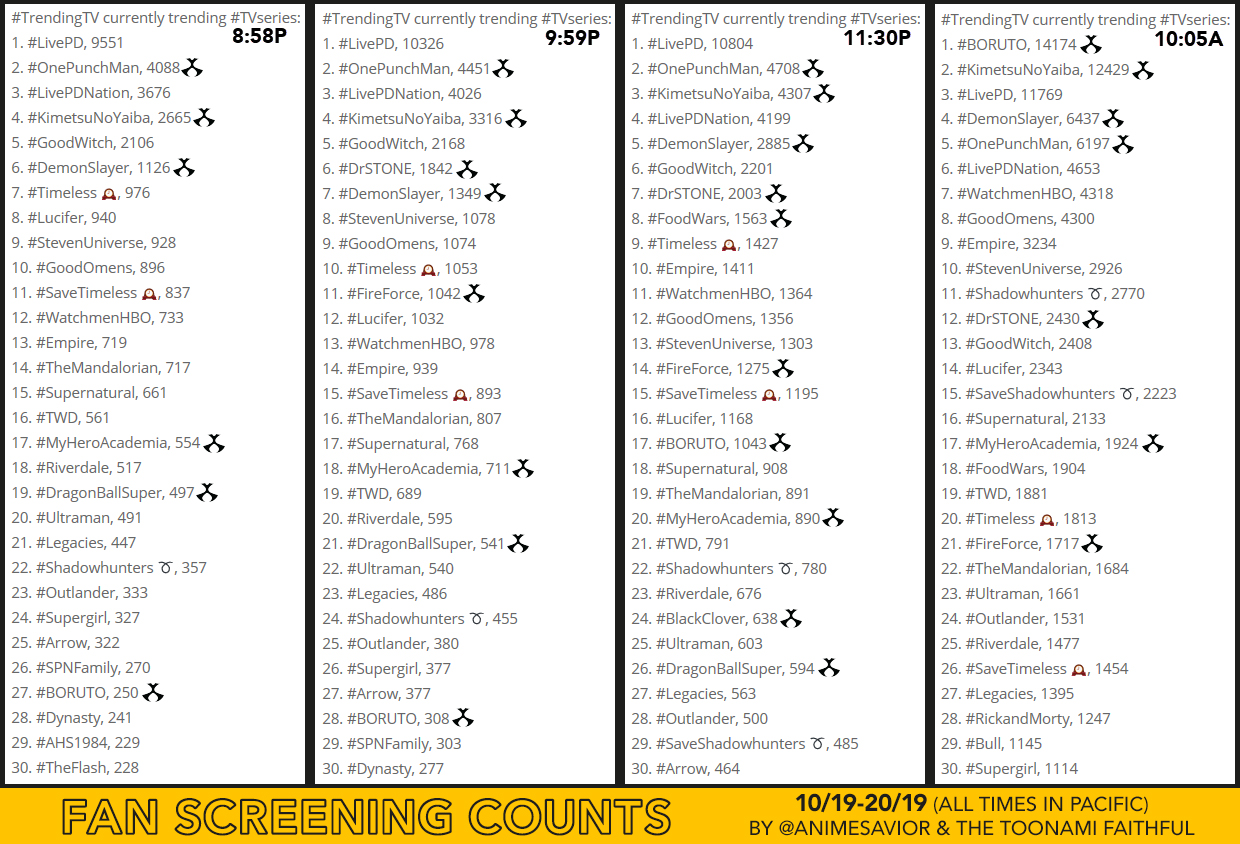 “You better [prove me that you’re useful.] But whatever happens, you absolutely must not overestimate your strength”

The Toonami Trending Rundown for Oct. 19-20, 2019. As Demon Slayer and One-Punch Man settle themselves in the lineup, we say farewell to Boruto for now, as the Hokage’s son airs its final episode as the show goes on a dub-hiatus.

Among some of the highlights of the night, Demon Slayer sees Tanjiro and Nezuko adjusting to their new reality as they begin their journey in searching for a cure, fighting off a demon as they meet Urokodaki, whom Giyu referred them to get training. Black Clover meanwhile has Mereoleona battling Rhya the Copycat during the assault against the Eye of the Midnight Sun, and Mereoleona wanted no part his copycat shenanigans, to say the least. And Boruto sees Squad Seven having to deal with a leftover army of White Zetsus from the war, as the team struggles to realize the importance of working together, as well as learning the hard way of not rushing to complete things.

It was a rough night for trending, as Black Clover, both Naruto shows, and Lupin the Third were the only trends in the U.S. alongside Toonami. Lupin’s buzz also created a character trend in Fujiko as she hides a gift that she intended to give to Lupin in the hideout’s toilet, causing a blockage and shenanigans. The full list, including statistics and tweet counts from the Twitter app and Amr Rahmy’s Fan Screening analytics app, can be seen below.

This week’s feature is the promotional trailer for Part V of JoJo’s Bizarre Adventure, Golden Wind. You can check it out below.

This past week, ToonamiFaithful.com released the fourth part of our Anime Expo 2019interviews, as I go on-camera for the first time to interview Deneen Melody, the voice of Ronye Arabel in Sword Art Online: Alicization as well as Akemi and Minako Okura in JoJo’s Bizarre Adventure: Diamond is Unbreakable.

Some great news for gen:LOCK fans, as WarnerMedia and Rooster Teeth announced that a second season will be in the works, to premiere on the upcoming HBO Max streaming service at an unspecified date. According to Variety, gen:LOCK season two will have an exclusive 90-day run on HBO Max before the series will be available on Rooster Teeth’s first subscription service. It has yet to be revealed if Toonami will also get to air the new season at some point at this time.

Aniplex announced a pair of new cast members for the ongoing dub of Demon Slayer for next week. Max Mittelman will be the voice of Sabito while Ryan Bartley will play Makomo.

Catch them in action on Episode 3 – "Sabito and Makomo" this Saturday night at 1:30 AM on @cartoonnetwork !#DemonSlayer 👹⚔️ pic.twitter.com/EgpVg25TPP

As previously mentioned, Boruto will be taking a hiatus from premiering new episodes on Toonami for an undisclosed amount of time. Neither Toonami nor Viz Media has given a reason why, although it wouldn’t be shocking if Viz was falling behind on dubbing Boruto and they prioritized getting the newest seasons of One-Punch Man and JoJo’s Bizarre Adventure out sooner. Regardless, here’s hoping Boruto won’t be gone for long as fans look forward to what the next generation of shinobi have in store for us next. Thankfully, Naruto is not going anywhere, as Naruto Shippuden will continue its current run every week at 3 a.m. Eastern for the foreseeable future.

Tune in next week as JoJo’s Bizarre Adventure begins Part V at 2:30 a.m. eastern, among other great shows. Until next week, stay gold as always.

Now, say goodbye to your senses. Only Toonami on [adult swim] on Cartoon Network.