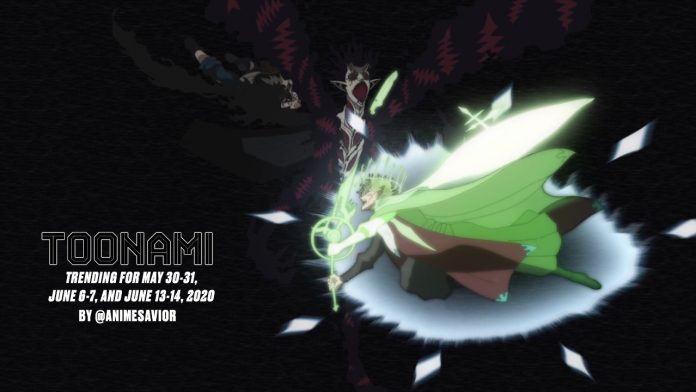 “Right here, right now, i am going to push past my limits!”

This Toonami Trending Rundown is a double-feature for the weeks of May 30-31 and June 13-14, 2020, plus an update for June 6-7, 2020. Due to the lack of trends due to delays in programming from COVID-19 which have plagued Toonami and in solidarity of the #BlackLivesMatter movement and worldwide protests against police brutality amplified by the murders of George Floyd and Breonna Taylor, we here at Toonami Faithful decided to give the Trending Rundown a bit of a break since the last weekend in May to help amplify voices spreading information on what people can do to help.

We did see some milestones during these weeks, as Black Clover saw the completion of the “Reincarnation Arc” and the beginning of its tenth arc, while Naruto Shippuden commemorated its 300th episode of the show airing on Toonami. Sadly, JoJo’s Bizarre Adventure: Golden Wind would join the long list of shows with production delays after the broadcast of episode 28, as the show was temporarily replaced with a run of Ballmasterz 9009 to allow the cast and production crews time to dub the next batch of episodes.

For the night of May 30-31, no trends aside for a handful of tweet counts were spotted on Twitter, while #Toonami would trend on Tumblr alongside JoJo’s Bizarre Adventure.  Meanwhile, for the night of June 13-14, Toonami would trend in the U.S. alongside Paranoia Agent, Mob Psycho 100, Ballmasterz: 9009, and Naruto Shippuden. #Toonami would also trend on Tumblr alongside #BNHA. While I was on break, my colleague Celia Rose also made a trending list for June 6-7, 2020, which you can see here. An update to that list mentioned here is that Toonami also trended on Tumblr. The full list, including statistics and tweet counts from the Twitter app and Amr Rahmy’s Fan Screening analytics app, can be seen below.

After several weeks of delays, Funimation has finally completed the last two episodes of My Hero Academia’s fourth season. Toonami confirmed that episode 87 will be airing this Saturday, June 20, at midnight, while episode 88 will air on June 27. Be sure to tune in or at least set your DVRs so you don’t miss out.

We hope you have yourself a Happy Juneteenth and we’ll see you again next week for another round of the better cartoon show. In the meantime, visit blacklivesmatters.carrd.co to see what you can do to help the fight against social inequality. Also, make sure you do your part to stop the spread of COVID-19 and to protect others by following your local health advisories as we are still in a pandemic. Stay at home unless you have to, practice social distancing when you go out by staying six feet/two meters apart, wearing a mask, and wash your hands thoroughly for at least 20 seconds.

Special thanks to @planetstwinkle, @sdurso5 and others I forgot to mention for their assistance in the creation of this trending rundown.

Did you enjoy this week’s Toonami? Let us know by commenting below or directly on our social media. And be sure to follow us on @ToonamiNews and subscribe to our podcast on Soundcloud for future content and breaking news updates. This week, we dial it back to Comic-Con 2019 as I got to speak with Robbie Daymond regarding some of his Toonami roles up to that point. Check it out in the player below.