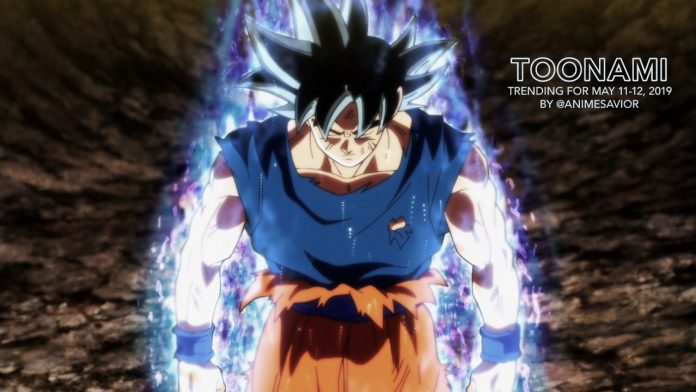 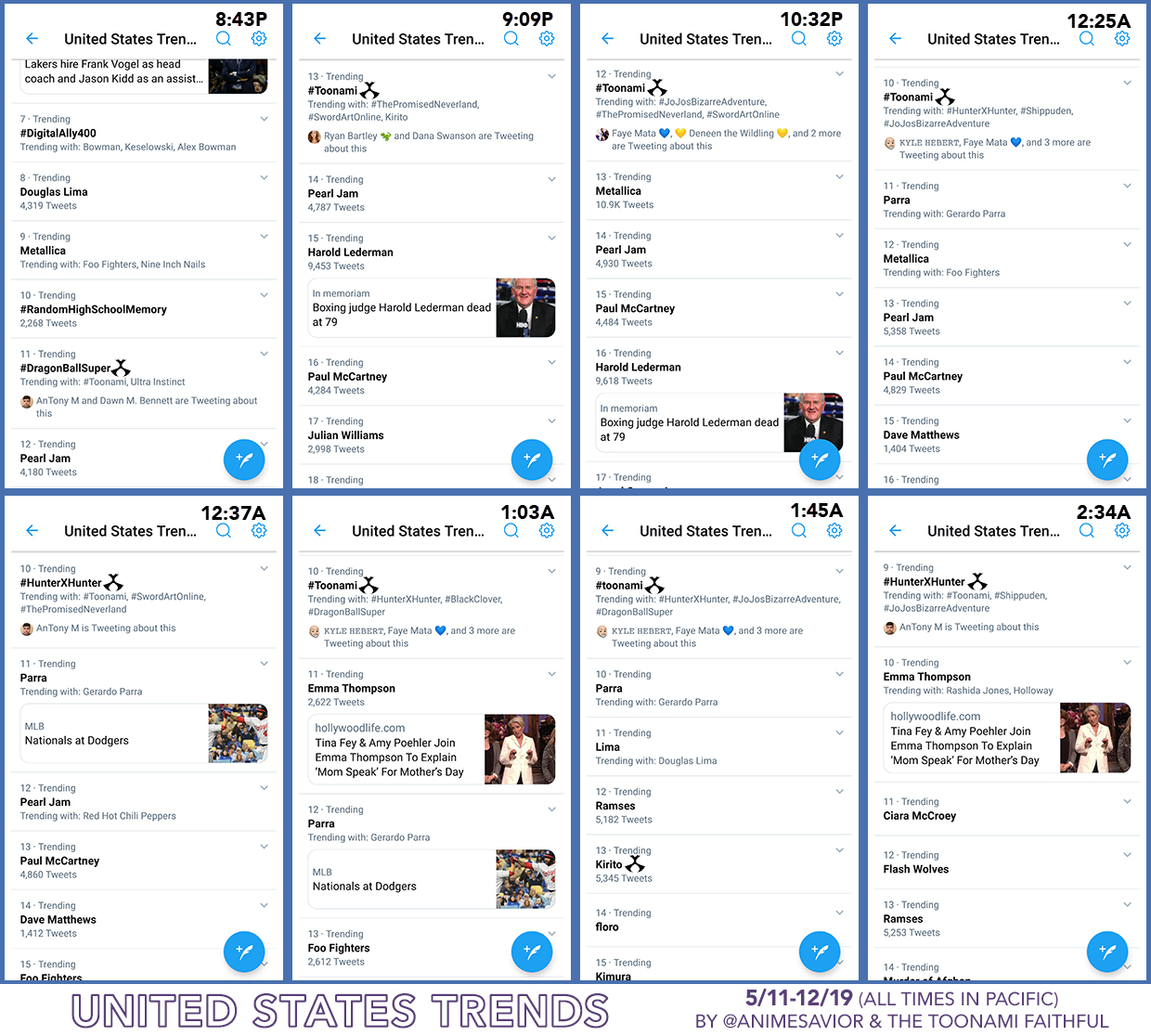 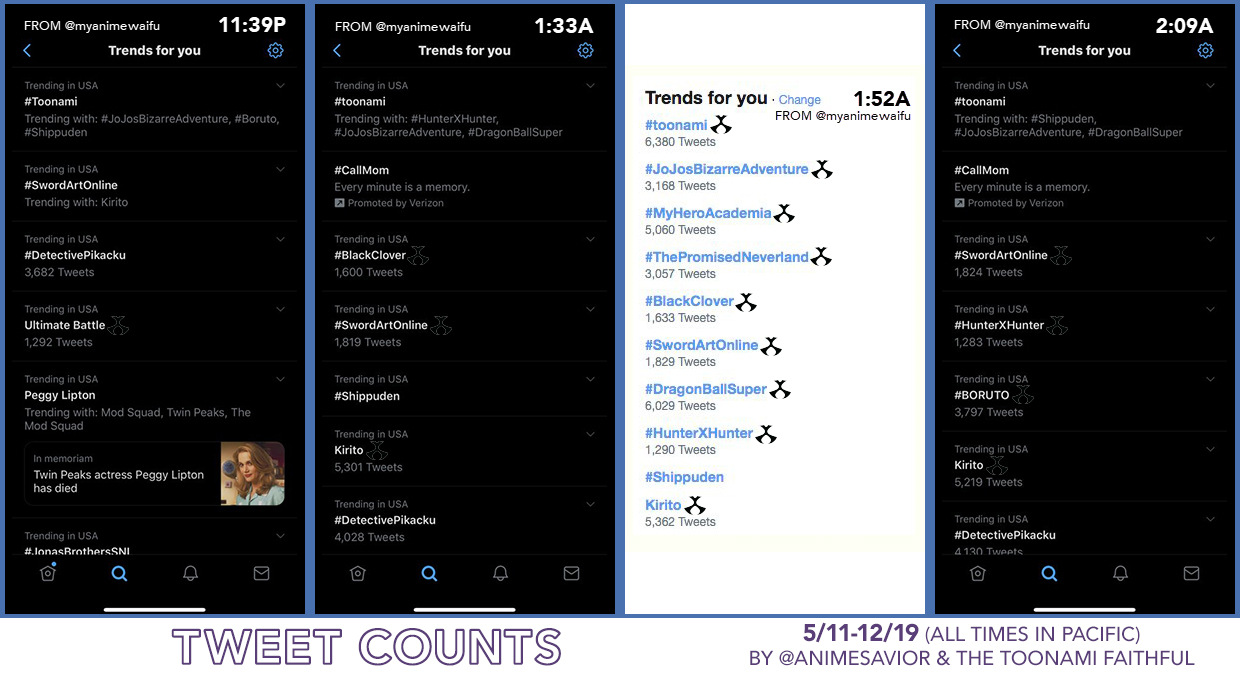 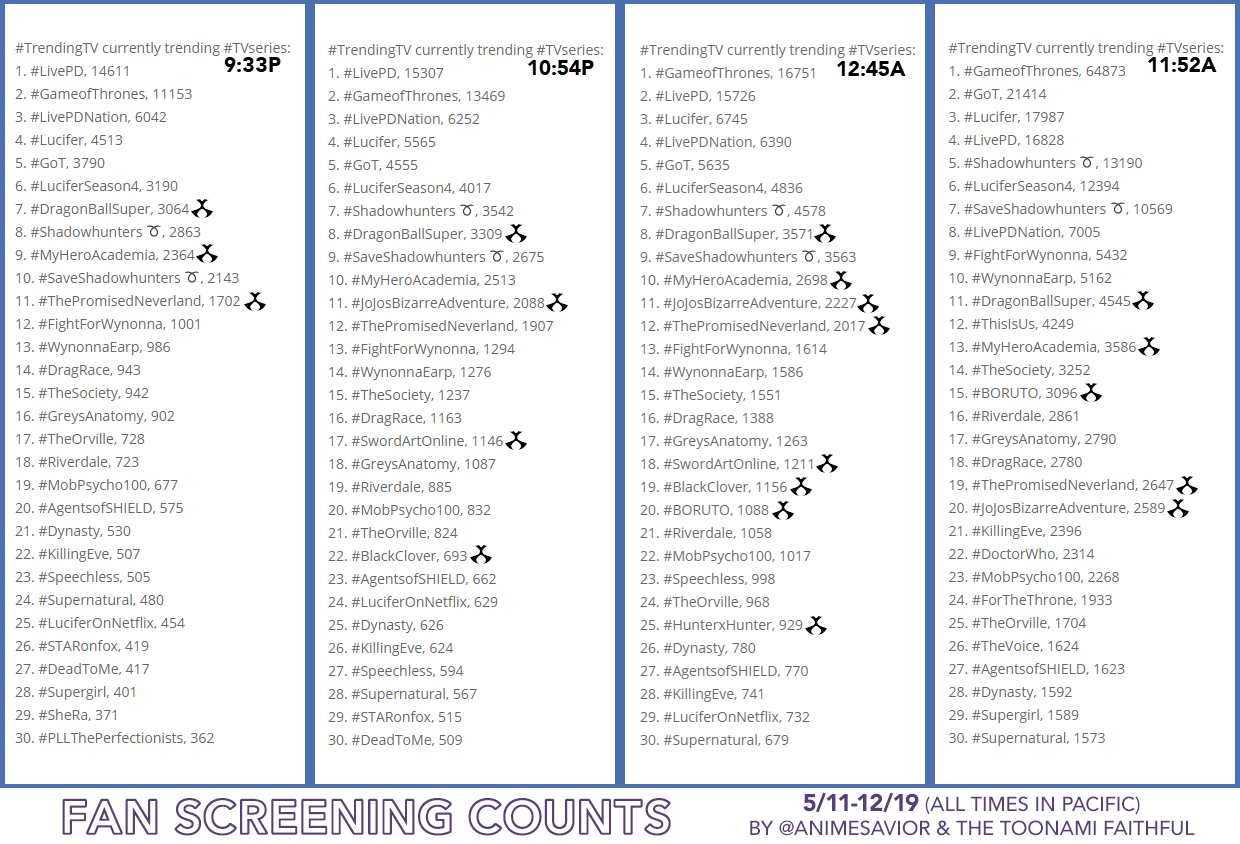 “Most likely, Goku has used the Spirit Bomb’s energy to replenish his exhausted body. But as you said [Tien], that alone would not be sufficient to explain what we are seeing now. It was the start, a match that lit a much greater power within. My theory is when the Spirit Bomb exploded so close to him, its tempestuous power coursed into Goku and smashed into his own energy, which he was already pushing to his max. This was the collision he needed to shatter the ceiling of his power and reach an ever-greater potential that has always been locked within him that he could never fully reach. Yes, he is now in uncharted territory, and it remains to be seen what will happen to him as he tries to sustain this fairly.”

The Toonami Trending Rundown for May 11-12, 2019. It was a night of big and memorable fights, as Goku discovers the Ultra Instinct form during his battle with Jiren, while we are witness to the finale of All Might’s battle with All for One, and Kushina tells the story of her and Minato’s sacrifice to save the Leaf Village and locking the Nine Tails within Naruto, among other great moments.

On Twitter, Toonami would trend in the US along with Dragon Ball Super and Hunter x Hunter. The Promised Neverland, Sword Art Online, JoJo’s Bizarre Adventure, Black Clover, and Shippuden would also trend alongside these shows, but not outright. In addition, DBS and SAO also produced character and in-show trends with Ultra Instinct, Ultimate Battle (the theme song that played as Goku unleashed his Ultra Instinct form), and Kirito (as he and Eugeo fend off the (Shining) Twins and Fanatio as they head up the tower).

On Tumblr, Toonami would trend along with The Promised Neverland and #JJBA. The full list including statistics and tweet counts from the twitter app and Amr Rahmy’s Fan Screening analytics app can be seen below. 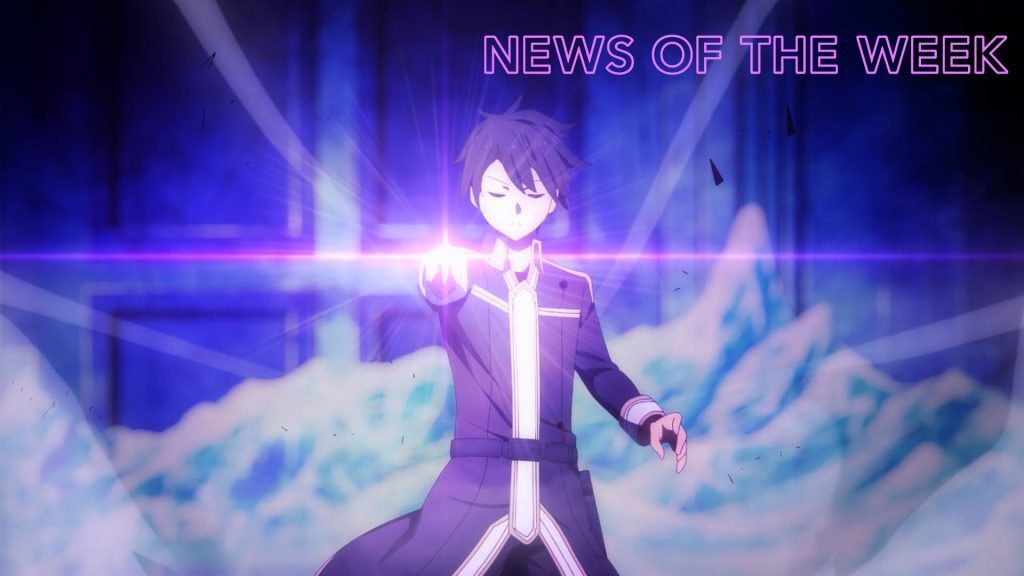 This week’s feature was the debut of the new music video “More” by Flying Lotus in collaboration with Cowboy Bebop, Samurai Champloo, and Space Dandy director Shinichiro Watanabe. You can check it out below.

Watanabe has inspired me so much over the years and last year his work actually changed my life. I hope we keep GOING! 🖤

Aspiring voice actors, want to appear in a future episode of Sword Art Online and potentially jumpstart your career? Aniplex and Bang Zoom will be hosting open auditions beginning at Anime Central in the Chicago area this weekend. We’re not sure if they’ll be doing this at other conventions at this time. For those trying out, good luck, and we hope to hear you on Toonami in the future.

We are thrilled to announce the incredible show we will be collaborating with @aniplexUSA at this year's Open Auditions at @AnimeCentral!
Show off your best acting chops for a shot to join the English cast in the next arc of #SwordArtOnline: Alicization! #ACEN2019 #voiceacting pic.twitter.com/OWbb2KB8lB

Toonami has announced their first panel of the year as Jason DeMarco, Gill Austin, Steve Blum, and Dana Swanson will once again be at Momocon to make some announcements, answer questions, and give out special goodies for those in the room. The panel will take place on May 24 at 7:00 pm Eastern.

And finally, we’re less than two weeks away from the return of Attack on Titan, and on Monday, Toonami has revealed the schedule for when season 3 part 2 arrives in Memorial Day weekend. Toonami will shift a half hour earlier to air from 10:30 pm – 3:30 am Eastern, with Attack on Titan premiering at 11:30 pm, while My Hero Academia will move up to start the block off at 10:30 pm, and the AOT rerun at 3:30 am will be abolished, which means that Hunter x Hunter will end off the night at 3. The other shows will remain at their regularly scheduled times for now. 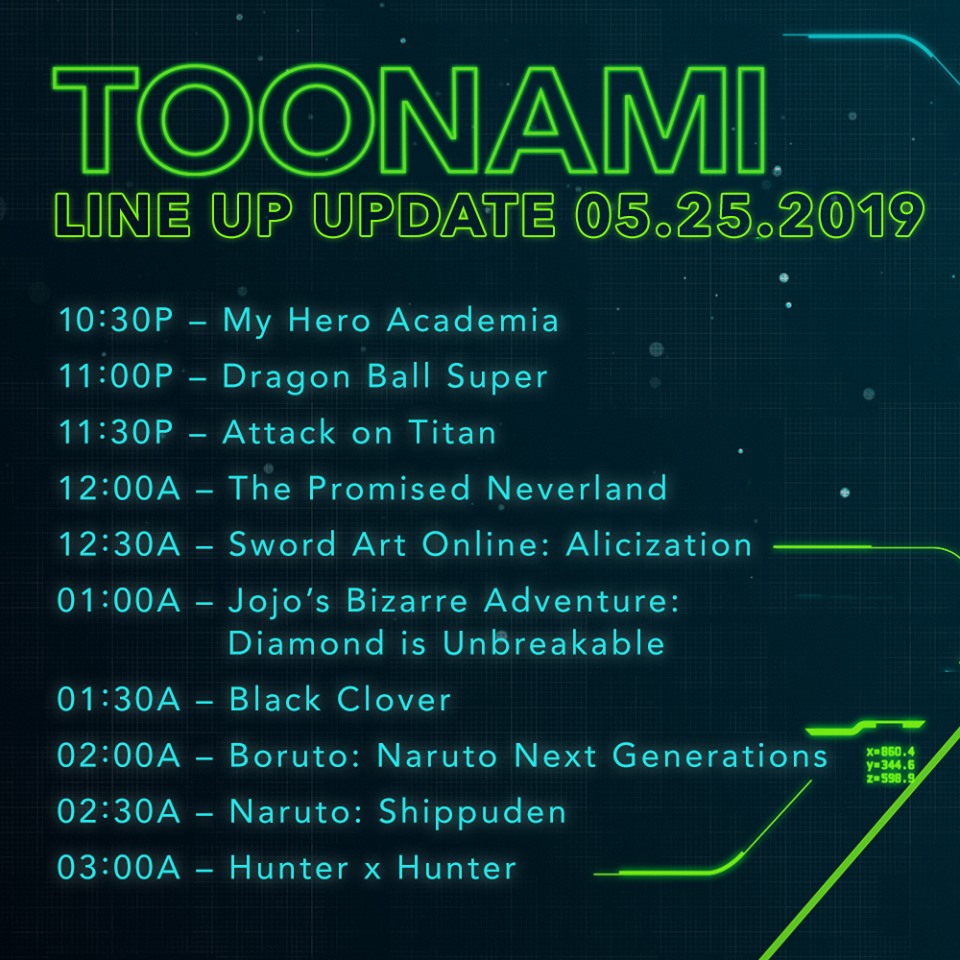 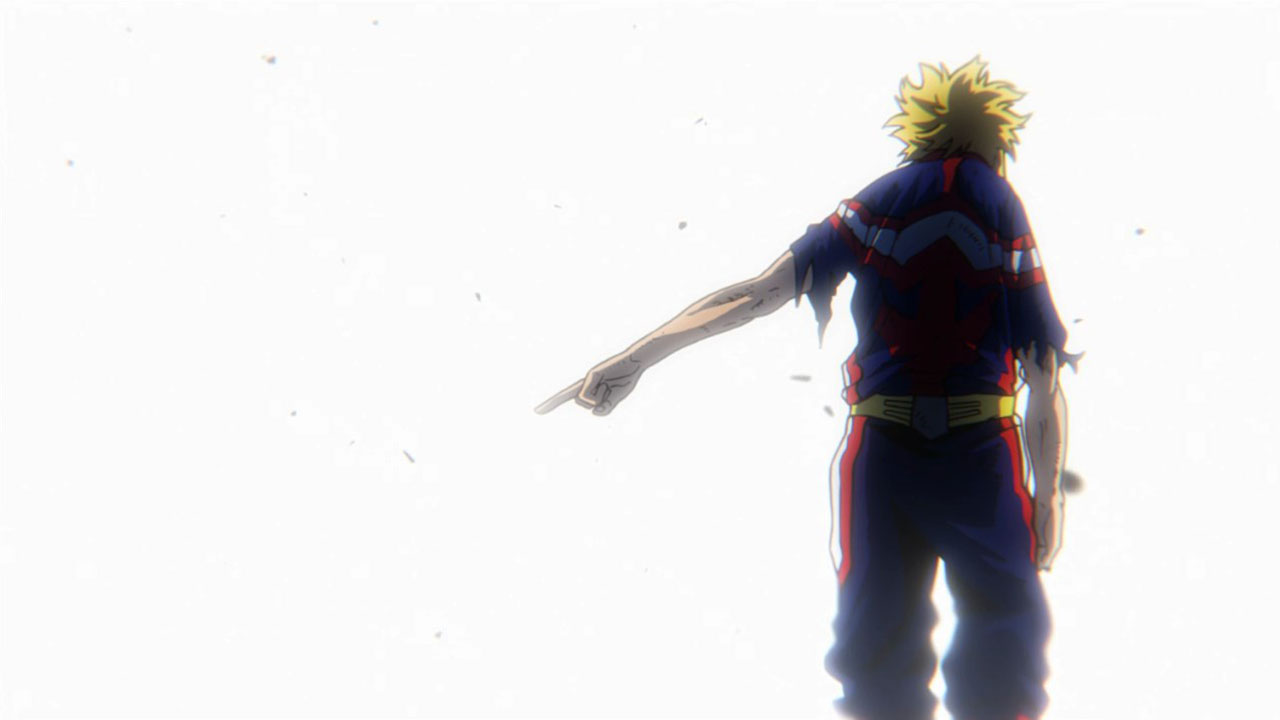 Now, it’s your turn. Only Toonami on [adult swim] on Cartoon Network.