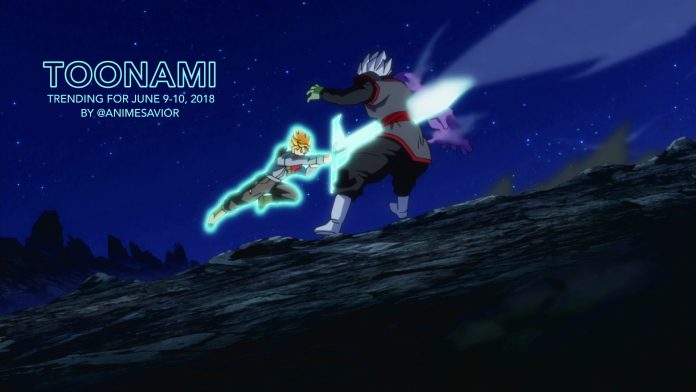 “It’s not about Gods and Mortals. You don’t believe in anything but yourself [Zamasu], and we won’t let you win! This is the power of mortals fighting for each other. The power of believing something bigger than just you!“

The Toonami Trending Rundown for June 9-10, 2018. Week 2 of FLCL Progressive is in the books as Goku and Vegeta fuse into Vegeto to counter Zamasu Black, while Aizawa gives Deku’s class a beginner’s quirk test, and Haruko goes after Hidomi and Ide, so to speak, while Jinyu tries to stop her, among other moments.

This week’s feature was a game review of Far Cry 5, available on all modern gaming platforms with the exception of the Switch. It received an 8 out of 10 score.

Of course, this week was a big week for video games as E3 took place in LA as gamers around the world enjoyed some of the big gaming announcements. One game of interest for the Toonami and greater anime communities announced at E3 was Jump Force, an upcoming fighting game from Bandai Namco featuring many of Shonen Jump’s famed characters. It is expected to be released for the PlayStation 4, Xbox One, and PC in 2019.

This trending rundown was posted a week late due to some personal and real life issues on my hand. Apologies for the inconvenience. We’ll have this week’s trending rundown posted sometime later today or tomorrow, and we’ll see you again on Saturday as always for another round of the better cartoon show.

Cult of Personality. Only Toonami on [adult swim] on Cartoon Network.