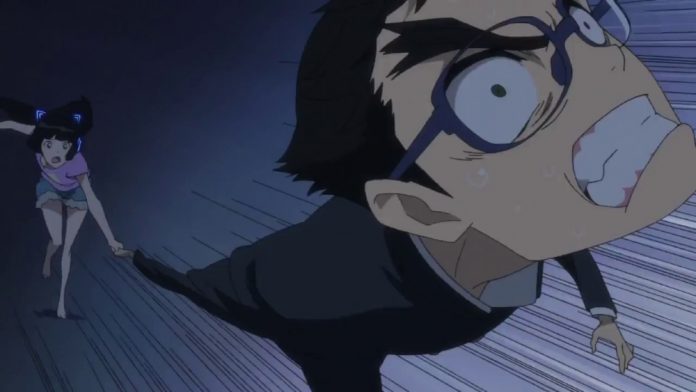 As we have begun our journey, I find that most of the reactions from FLCL: Progressive are more positive than negative (which has to be a considered a win in the eyes for all those involved). I think Adult Swim has done a decent job at keeping things true to the original series, as well as establishing this new series as its own thing. But there are those who are either still unsure or find that the series was unnecessary to have been made in the first place. I can respect that people may not like the series (even if we are just two episodes in), but it’s going to continue despite how they feel about it. However, the broader implications surrounding whether the show performs to what Adult Swim expects is crucial and a huge reason why I’m pulling for these shows to be successful (for the parties involved).

What’s funny (in a sad sort of way) is that there are still people who either didn’t know this was going to premiere or haven’t watched the series at all yet. Adult Swim had pulled out all the stops in the marketing/advertising of the series. So much so that there was a promo for FLCL: Progressive during the NBA Playoffs! Billboards were placed at many choice locations, and I’ve seen ad regularly s pop up on YouTube as well as Twitter. To add to that, episodes of FLCL: Progressive will be available on iTunes and Amazon after the episode airs. You can watch the series on Adultswim.com even if you don’t have a cable subscription. Adult Swim has done almost everything it can to make sure this series is available for the viewing public, so it’s troubling hearing how the word still wasn’t out there. On a side note, the comedy is not lost on me that there are a ton of people who weren’t aware of this series despite the advertising. The lack of sufficient advertising has been a major complaint made by fans in the past. Irony can be a cold mistress sometimes.

We are living in a time where Anime is getting released dubbed months before it’ll get released in Japanese.

Let that sink in. pic.twitter.com/ktv7880oY4

Heck, you can’t even see this series in Japanese yet, so Toonami’s English dub is the only way to watch FLCL: Progressive. Which when you think of it, is a remarkable thing to say. Instead of a Western audience having to wait for a show to finish airing in Japan, it’s the other way around, truly putting this show in the forefront of the anime fandom. What a time to be alive if you are an anime fan. It’s truly a remarkable thing to behold. Plus, I enjoy the fact that the series is getting talked about (as well as Toonami) in places you wouldn’t expect. All good things, but again I wonder about how the feelings towards the first FLCL series could turn things in a negative direction later.

Many debates about the series had already come and gone when the project was announced. Topics ranged from it being a cash grab, to how Adult Swim forced creators hands to make FLCL: Progressive and Alternative a thing (which was utterly ridiculous). People were looking for reasons to get upset that anyone would dare continue making FLCL when the first series was considered such a masterpiece. Although, from what I could gather, I’m pretty pleased that it was Production I.G. and Adult Swim bought the rights. With as much as they wanted to keep the “FLCL feel,” I believe this show is in good hands.

You blocked giving us subbed FLCL to force us all to watch the TV broadcast, and it still got a pitiful 500k in it's premier… — Actually, we are all thrilled because we won our time slot against all of television with people ppl 18-24 and men 18-34 for… https://t.co/Dop3XjPaXj

Now a recent debate I’ve seen on Twitter is how FLCL (after one episode) was deemed a failure after looking at the traditional viewing numbers of its premiere. Many lamented about how unnecessary this series was to begin with (as I stated earlier), so the naysayers took these (outdated numbers) to the bank, believing that it somehow proved them right. I laugh, considering Jason DeMarco himself talked about how FLCL on its premiere weekend won its demo (which is enormous), and with how the series seems to be super popular on iTunes every time a new episode is available. Now I can’t really say how well or how poorly FLCL: Progressive is doing when it comes to streaming and digital downloads (only Adult Swim and Production I.G. will know). But from the outside fans should be pleased to know that the series is at least selling well on iTunes.

What’s also nice about the new seasons of FLCL is that instead of waiting for a typical season of anime (12-13 episodes or more), we can get a complete picture in just six weeks. So we can be optimistic, pessimistic, or whatever and get those thoughts out quicker than we typically can. So if you are still unsure or don’t even like FLCL: Progressive, it’s okay. Everything will come together in six episodes. Who knows, due to the short length of the series, minds can change to where more people will enjoy the series.

I hope that things pan out well for Toonami (which seems to be the case as of now). It’s popularity on iTunes and the fact that FLCL: Progressive won its demo gives me high hopes. But it needs to continue to impress, or things could fall apart. That’s the big thing I look at, because if this turns out to be a success, that would be two original programs that Toonami got their hands on that panned out. Meaning, that Toonami might continue to do these types of products and that they feel this is a way for them to stay in the minds of animation fans all around the country. Not only could Toonami work out a deal to get “Simuldubs” of popular series from FUNimation, but they could then also add some original programming that will make the block feel fresh compared to streaming companies.

So far, I feel optimistic about FLCL: Progressive. I get the “FLCL feeling” I got when I watched the first series, but it certainly feels different. I don’t think that’s a bad thing—I wouldn’t want it to be a pure clone of its predecessor. The animation has looked pretty sweet, and the music sounds all kinds of perfect (thank you for The Pillows). It’s even seemed downright brutal in the dream sequences that look nothing but spectacular. It’s been an exciting trip in just two episodes, but I still reserve the right to change my mind, given how little has aired so far.

You can have your reservations toward FLCL: Progressive. You don’t even have to like it. But if you are a fan of Toonami, you better hope that things work out for this project. A successful FLCL: Progressive & Alternative can help Adult Swim pour more resources into Toonami for more of their original programming. It’s something that my colleagues have talked about, and I think it’s a direction that would benefit Toonami. I want more original content (especially action animation), and I believe Toonami could be the one last beacon of hope for those type of shows making it on television.