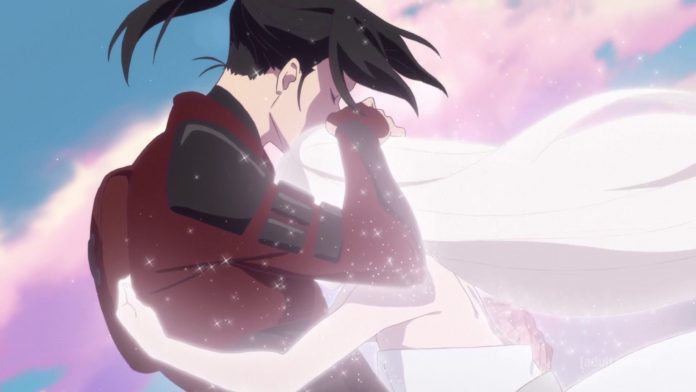 And so we bid adieu to Fena: Pirate Princess as the much-anticipated series aired its final episode this weekend. Overall, I immensely enjoyed the property and felt that the adventure story fit right at home on Toonami. Yet, I’m left scratching my head at the final turn where Fena: Pirate Princess ultimately decided to end. Don’t get me wrong, watching the emotions overflow between Fena and Yukimaru was touching and spotlights the very strength of the series. It’s characters. And while I don’t need a simple story to keep me invested, the ambitious ending can leave some questioning how they got here. Seriously, Fena was treated like Dr. Strange during the final Avengers film, where she had to contemplate which future she wanted the world to follow. Why? I’m not sure exactly. Sure, as Cody mentioned, all maidens who are brought to Eden are given this choice. But I’m stumped as to why that is? It certainly gives a theatrical feel at this ending with real consequences. But again, I ask, why was this fate befallen on Fena and her lineage?

For this episode, I won’t go into huge detail about the final episode plot-wise only because it’s a relatively simple premise (but can spur so many side topics). Cody informs Fena of her heritage (with her being the daughter of the King of England and a distant relative to Joan of Arc) and how all “Maidens of Choosing” are bestowed visions by Joan of Arc and are called by Eden to make a difficult choice for the fate of the world. Cody continues to inform Fena of her options and the future, depending on how she answers. Some could lead to the destruction of humanity or possibly starting anew (much like Noah’s arc) with only Yukimaru. But Fena is faced with a difficult choice in which she decides how society progresses (not something I’d envy).

Ultimately, Fena decides to sacrifice herself to ensure the world continues moving forward positively and that her friends can be safe. It was an easy choice for her considering the gruesome futures we witnessed while debating what to do earlier. Ready to forgo her current life and memories, Fena leaves Yukimaru and the rest of the Goblin Pirates behind after making her decision to better the world. It’s here we get a touching scene of the two holding one another as they say their last goodbyes, which I’m sure brought the entire audience to tears as it was easily the most gut-wrenching moment of the series.

However, it isn’t the end for this love story, as Yukimaru makes it out of Eden (as it is collapsing now that Fena has fulfilled her destiny) and discovers a young brunette woman who looks exactly like Fena. This woman has no memories of herself or anyone else, to which Yukimaru proclaims that she is Fena and that she’s part of the Goblin Pirates, reuniting the two once again. After that, we get a few cute ending scenes, showing some hijinks between Fena and the crew (such as Karin teaching her how to shoot), and finally ending on a touching moment between Fena and Yukimaru. Sadly, they do not kiss, but there is at least a slight chance of another season on the horizon where things are finished, and I hope we get more down the road due to the questions I have from this final episode.

This was the attempt to close the final chapter of Fena: Pirate Princess on Toonami, and it was a valiant one, to say the least. In my previous review, I mentioned how this type of storytelling with an “all-knowing” character could leave a bad taste in my mouth just because of how out of left field it can feel. And I can appreciate how Fena: Pirate Princess tried to neatly wrap things up with how dramatic the choice Fena faced considering that it seemed that more episodes could help flesh this ambitious idea. But I have many questions that I’m not sure can be answered unless given some insider information from the creators or if a second season is made. I want to know more about Fena’s lineage and why maidens in her bloodline are forced to make choices to shape the Earth. Does her relation to the King of England play any factor in this, or is it solely about her bloodline with Joan of Arc? And is it possible that this reincarnated Fena might have to deal with the same issue the blonde-haired one did too? I don’t know and can’t answer any of these at this point. But on the bright side, if another season is green-lit, we have a ton of mystery to keep fans intrigued besides the usual pirate shenanigans. And what makes that possibility funny is that then season two’s strength would turn into the story-driven plot than what it was in season one (primarily due to the intrigue of Fena’s and the Goblin Pirate’s background).

And that’s the main focal point of Fena: Pirate Princess. While the story itself might be less engaging or confusing, I don’t think it matters as much due to how fun the characters were! I loved getting to see the layers on Shitan throughout this series. Watching how he started being told how useless and weak he was, becoming who he is now was a fascinating ride. It wasn’t just all about him wandering around being a funny playboy. He had emotions that ranged from playful or flirtatious to sinister and ugly. Not to mention that Fena had to deal with such emotional turmoil at one stage, from having a full-blown panic attack aboard Abel’s ship to being completely head over heels in love with Yukimaru after he pledged his loyalty to her. Getting to see the in-depth emotions and motivation of focal characters like Fena, Shita, Yukimaru, and Abel creates an experience that fans enjoy watching. And while others might not have had as much screen time, every main character had some moments of personality to be spotlighted, making them more endearing. So if the characters are boring in a story that focuses on them, you wouldn’t have the fanfare you do. And I think that’s what Fena: Pirate Princess was aiming to accomplish.

Fena: Pirate Princess is a CHARACTER-DRIVEN show, where the individuals lead the audience to await what is coming up next. Sure there were lingering plot points throughout the series, but they weren’t the driving force of this series. This series wanted to let the characters take hold of what the narrative of Fena: Pirate Princess was going to be, and look no further than Cody’s character as the prime example! Finding Eden and locating the “Vault of the Earth” were OK (and are needed for a series even if it felt like it took a backseat). Still, it pales in comparison to following the love story of Fena and Yukimaru or Shitan looking to redeem himself to Kei and Master Yukihisa. And those are just the two that stick out to me when there are a plethora of moments like this that I’m sure fans are more interested in than finding Eden. Letting the characters dictate the focal point is a brave choice and one that I thoroughly enjoyed.

And the fact that Fena: Pirate Princess was more character-driven, a lot of the heavy lifting fell on the shoulders of both the cast and directors. I’m still enamored by the performances of the entire cast of what they were able to accomplish. Sure, I had some highlights from those like Brittany Cox for her fantastic performance on giving a believable panic attack. Or when Ryan Nicolls acted for Abel, finally seeing Helena for the last time before he died. These performances were magical, and you can find these types of memorable moments littered throughout the entire series. Anyone’s favorite character had these emotionally charged moments that grabbed the hearts of viewers all over the country. And while some might complain at the ending of the story, these performances still mean something.

Yet it’s funny how I talk more about the emotional moments than the fights for a Toonami series. There were a few amazing ones like watching Yukimaru and Abel duke it out at Eden or Abel’s ship blasting the Rumble Rose Pirates to oblivion (or not since some survived), to name a couple. But there was some traditional action provided for fans, which I think was wise to use sparingly compared to what Toonami fans are used to watching. It made those moments more dramatic and vital when they occurred. Many fans will recall when the Rumble Rose Pirate ship was destroyed due to the sheer animation quality, and because of how few throughout the series there was, I think each battle that happened will feel more special. It’s a wonderful touch, and I hope more Toonami series have that going for them in the future.

And I think it was because of how few fights there were that fans could truly appreciate the overall art of the series. It was stunning, with moments looking like it came straight out of an animated Disney film. I could not get enough of the scenery hand-drawn in specific episodes or how beautiful Fena looked when she danced to open the stairs to Eden. I was enthralled with the beauty of the series that fights couldn’t capture. And I think making these the selling points of Fena: Pirate Princess instead of having countless bloody battles made this series more substantial. I cannot stress enough how these aspects help sell this series for myself and hopefully to other Toonami fans.

Overall I think Fena: Pirate Princess was a fantastic series for Adult Swim to co-produce and premiere on Toonami. It meshed with the audience so beautifully, and the general excitement surrounding it felt authentic and magical. The series gave us unforgettable characters, followed by the fantastic artwork that anime fans are always craving, creating about as much of a complete package as you could ask for. Yes, I’d argue that the ending is weaker if we solely graded on the technical aspect of storytelling. I certainly still have questions after everything unfolded. But it was then where I realized what Fena: Pirate Princess was about that made me want to review it in the first place. What made Toonami begin their lineup with the series, or why do so many fans talk about it. It connected with its audience due to the loveable and impressionable characters we all grew attached to these past three months. It succeeded in letting the characters tell the story instead of having the story drive them. Fena: Pirate Princess nailed the character drama that mainstream anime seldom try to achieve, and I believe the series was rewarded in a way that words cannot describe. I hope others can find the fun and value in this series when it’s all said and done cause I know I will for quite some time!

Rating: A wonderful character-driven series, that had a wonderful romantic element to give this show the complete package.

CJ Maffris is Editor-in-Chief at ToonamiFaithful.com. Feel free to follow CJ on Twitter to see more of his Fena: Pirate Princess commentary @SeaJayMaffris