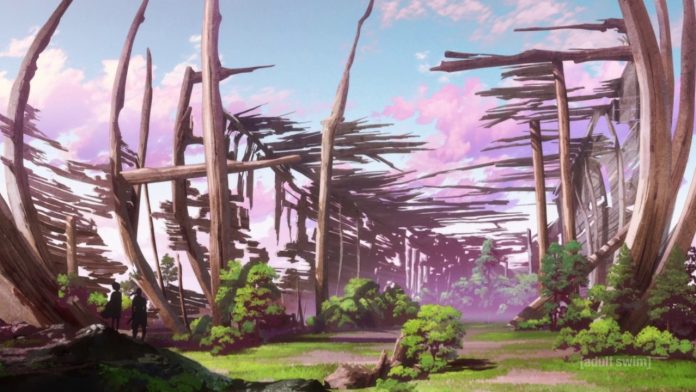 Well, I got half of what I was expecting. Fena: Pirate Princess has always left fans hanging on some huge cliffhangers to keep viewers invested throughout its run. But I’m not sure anything was as dramatic as what fans were treated at the end of episode 11. Through interviews with Toonami Faithful, listeners were warned that some important stuff was coming. Still, I never had the idea that Cody would turn out to be an “Observer” or the maker of this story as the series barrels toward what feels to be an explosive end. Personally, this kind of twist isn’t my favorite, but we were still given an overall fantastic penultimate episode and one that fans will probably be talking about for a long time. Oh, and we finally got a showdown that I’ve been waiting for between Yukimaru and Abel! So at least we got something in the action department that I’ve been craving.

We start things off with Abel and crew walking through the abandoned ruins seemingly under a spell, hellbent to find Eden and Helena (gaining some rather nasty red eyes in the process). Viewers are cut away to see where Fena and Yukimaru reach after climbing the staircase in the last episode. The two are traversing through a stunning background (something Fena: Pirate Princess has nailed since episode one), and the two are awestruck by reaching what Fena called the Ark (or, as some would know, Ark of the Covenant). And while I’ve talked about the cool nods to historical legends, one aspect I haven’t mentioned as much is the powerful religious themes throughout Fena, which is a considerable lapse on my end considering how up front it was. I’m not a religious person, so that could play a part at some of the themes (that aren’t as obvious such as the importance of Eden in a more biblical sense). But for those that have that type of background, they probably enjoy these types of moments since it feels tactful. Religion is used thematically all the time, and I haven’t found any type of issue of Fena: Pirate Princess using that aspect. Much like how I praised Fire Force’s handling, this series has a similar feel in that regard, and loved how the story progressed with these themes.

We return to Fena’s crew, celebrating that they found the immense treasure, when Karin and Makaba wonder where Fena, Yukimaru, and Shitan are located. Like clockwork, we see that Shitan is carefully observing what appears to be the legendary sword Kusanagi, but he quickly regroups with the rest of the Goblin Pirates when called out to by Karin. Tsubaki would begin to notice other people were approaching the treasure and had the entire group hide as Abel and his men appeared in the “Vault of the Earth.” The treasures included (or at least mentioned) were San Miguel, Captain Kid, Holy Grail, Ark of the Covenant, the Knights Templar, and others (which blew my mind considering I love hearing all kinds of treasure stories in media)! All of these riches were brought to this vault if someone had a calling, lying in wait if they’d have a use for the world in the future. The captain of the naval fleet that Abel accompanied rushed over to start collecting the treasure for himself, which Abel didn’t take too kindly. He shot him in the back, murdering him, proclaiming that if anyone would succumb to greed, they’d meet the same fate.

Abel calls out to the Goblin Pirates, asking for them to withdraw and leave peacefully. Of course, pirates being pirates, the group decides to fight back, and fans are treated to a beautiful battle where the Goblin Pirates show their stuff collectively. Seeing the navy barrage of bullets was a great tone-setter, but it was no match to the resourcefulness of our pirate crew. We all knew how deadly the team was said to be, but seeing it in full force (especially more of Karin, who looked stunning while fighting back), made me understand more about the rumors that swirled around them. While we’ve seen the more heartfelt moments of Fena’s crew, they are stone-cold killers when the situation arises. And while it was short, group battles like this is something I enjoy in anime. One-on-one fights are fun, especially with what you can do in animation and choreography (which we will get into later), but seeing a collective team fend off or fight back (the Straw Hat Pirates vs. Oars for example) is just as rewarding, much like how we feel when watching sports teams. It’s a bloody sport (with what we see in Fena: Pirate Princess), but one I eat up in the media I watch.

And while all this is happening, Abel sneaks away and heads over to where Fena and Yukimaru were, leading to a fight many could not wait to see. Abel seemed to have gone mad on his search for closure with Helena, eyes red like blood as the action was about to commence. He was hallucinating, thinking that Fena and Yukimaru were Helena and Franz all those years ago. Fans are given what I can say is one of the BEST fight scenes Toonami has aired on the block (I know that’s a bit hyperbolic, but I was very excited watching it play out). The sleek movement from Yukimaru’s handling of his katana, while Abel’s deceptively agile movements with his trusty pistol in hand captivated both myself and hopefully the entire audience. It was dead even, and the choreography between the two was something else as it gave me vibes of Kirei Kotomine and Kiritsugu Emiya from Fate/Zero. I would call Yukimaru the victor of this fight, considering he cut off Abel’s arm, but Abel did get a decent stab in while fighting back.

And it was after being stabbed where a lot of the missing pieces from the assault on the Hope came into the picture. Abel WAS on the ship when the “devils” attacked and even remembered seeing Yukimaru when he was a child fighting back. With how deadly the battle was becoming, Fena decides to stop it feeling she had to protect Yukimaru after all he’s done for her (and possibly Abel too). And it’s at this point where the series took a much more dramatic and fantasy-like turn that I didn’t expect.

Abel was doing everything in his power to have Helena come back to him and felt that both Fena and Yukimaru were in the way of that becoming a reality. And at the final hour, a purple flame sparks, to which Helena or her spirit physically appears (in some breathtaking animation). At first, I believed that Abel was seeing things due to the blood loss after losing an arm. But with the topic of witchcraft inserted earlier, it would appear that this was the real Helena in front of all three of them (possible witchcraft afoot). Abel’s harshness dwindles as he is finally reunited with the woman he loved. Helena was pleased that Abel was able to answer the call of Eden and see her again. Abel is then treated to some closure as he confesses all of the sins he’s committed, hoping for some forgiveness from Fena’s mother. The music and emotion in Abel’s declaration and the tender sweetness from Helena give viewers the kind of emotional roller coaster that melts the heart. And it was then where Abel was thanked for what he was able to accomplish and passed away after a grueling adventure.

I will say that this seems a bit too cleanly wrapped up, at least on Abel’s end. While I wouldn’t call him the worst person imaginable, he did do some terrible things, and to be rewarded as he did to be with his beloved one last time, feels a bit off-putting. Be it a possible illusion or witchcraft; I think Fena: Pirate Princess was trying a bit too much to either make him sympathetic or hoping fans would forgive him despite the atrocities he committed. Did he have a tragic backstory, and terrible hand dealt to him? Yes, but I don’t blame others who might feel a bit weird on their emotions toward Abel after seeing everything play out. Abel had moral ambiguity, and it’s these types of characters that can spark all kinds of discourse. And while you can debate this fact all you want, there isn’t a debate at the performance of Ryan Nicolls. He made Abel his own, and seeing the emotional turmoil and relief of Abel, performed the way he did was nothing short of astounding. Fena: Pirate Princess is a character-driven story, meaning a lot of pressure is on the actors who play these characters. If a performance isn’t working in a series like this, the enjoyment level will falter. Yet what Nicolls was able to do for Abel has me giving him a standing ovation. Genuinely remarkable and something I can’t stop at praising!

And funnily enough, the story doesn’t finish there, as Franz arrives out of nowhere looking to be the final adversary for Fena. But it isn’t actually Franz. The person in front of our two heroes turned into Cody and would reveal themselves to be the “Observer” or “story-maker” of Fena’s life (which I would argue that would make this entity the staff at Production I.G.). Jokes aside, I’m honestly not sure how to take this final reveal. I did not see that coming, and while Cody was hinted at being a much bigger player in the overall story, I didn’t think that would mean they are making the story right in front of us. I can see both sides of this argument where the sudden revelation came out of nowhere and did not make much sense. Yet there have been supernatural callbacks on Fena: Pirate Princess for a while. They just weren’t as in your face. But I can see how this episode reveal can make some fans feel a bit disjointed.

We are now one episode away from Fena: Pirate Princess finishing, and I’m unsure how I feel. The series had taken a massive turn toward the supernatural, giving us a god-like entity where Fena will have to make a huge decision (one that Helena mentioned before she vanished). And I’m honestly not sure how this will play out, leaving myself and probably a ton of other viewers a suspenseful feeling. Can we make tomorrow be Saturday instead of Monday? Cause I don’t know how I’m going to be able to handle a whole week on this last cliffhanger.

CJ Maffris is Editor-in-Chief at Toonamifaithful.com. Feel free to follow CJ on Twitter to check out his commentary on Fena: Pirate Princess @SeaJayMaffris.

Don’t forget to listen to the Toonami Faithful Podcast to be up to date on any news regarding the block, as well as the best commentary you’ll find about Toonami out there. And make sure to tune in to our other podcast project, FenaCast, where we discuss the last two episodes that aired as well as our thoughts at how the series has been going.