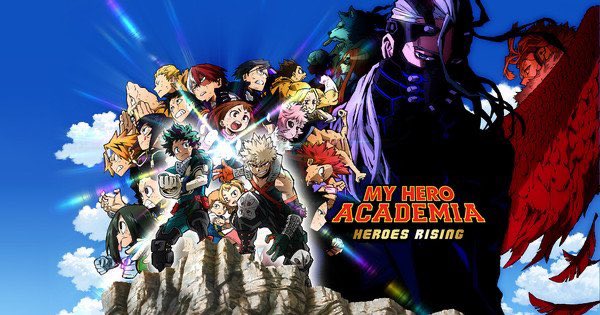 WARNING: THIS REVIEW CONTAINS SPOILERS FOR SEASONS 1-4 OF THE MAIN MY HERO ACADEMIA SERIES.

As much as I enjoy My Hero Academia (MHA), I don’t always like looking at it critically. Of course, it isn’t perfect, and its faults are worth pointing out at times, but it’s one of those series I watch exclusively to have a blast. The second movie, Heroes Rising, gave me one of my largest internal conflicts between those two feelings. It’s got some intrinsic flaws that can’t be ignored, but at the same time, it was so fun that I still ended up loving it anyway.

The kids of class 1-A have been assigned to open up their own temporary Hero Agency at Nabu Island, a peaceful, remote area with a population of approximately a thousand people. Everything seems to be going well, but wherever class 1-A goes, trouble follows. Soon enough, a group of four villains invade the island in search of something.

Heroes Rising introduces a slew of new faces, the majority of which are movie originals. The movie’s co-protagonists are two young siblings named Mahoro and Katsuma. To paint a picture, imagine Kouta from season three but with his introductory personality and his personality after Deku’s fight with Muscular split into a girl and a boy, respectively. While the siblings may seem reminiscent of all the other kids that Deku saved, they do have intrinsic characteristic differences at large. Katsuma was very entertaining to watch, as he reminded me of Deku before he obtained One For All. Katsuma expressed a similar adoration for heroes and willingness to protect those he holds dear enhanced the emotional moments of Deku’s desperation to defend him. Out of all of Deku’s “adoptive little siblings,” Katsuma might be my new favorite.

Our main villains of Heroes Rising, a gang of four led by a mysterious man named Nine, are sadly not as compelling. The three sidekicks, Mummy, Slice, and Chimera, are simply there to fight the heroes and are about as one-dimensional as My Hero Academia characters can get. Nine, on the other hand, just felt like an amalgamation of the base characteristics of All For One and Tomura Shigaraki. Compared to the antagonists of Two Heroes, Nine and his cronies lacked a lot of the standout flair that MHA tends to deliver.

Heroes Rising also introduces a new pro hero familiar to those caught up with the manga, Hawks. Hawks plays a big part later in the main series’s story, but none of that is mentioned or alluded to for obvious reasons. His transition to animation is flawless, and the film captured his cool demeanor perfectly. Still the problem is that he’s absent throughout most of it, which is a little disappointing, considering that his appearance was hyped up pre-release.

Before I get into the meat of the story, I’ll answer one of the most frequently asked questions regarding the film: no, you do not have to be caught up with the manga to understand Heroes Rising. Anime-only fans will be fine as long as they completed the third season. There are only a handful of minor nods to the later parts of the manga, none of which spoil any major mainline plot points.

The plotline is what you would expect from MHA: class 1-A starts a new thing in a peaceful place, villains attack, teenagers have to save the day. While formulaic, MHA almost always executes the routine well enough to leave me satisfied in the end. Heroes Rising is no exception. The best thing is that we get the entirety of class 1-A in action together (which we haven’t seen for quite some time). It’s such a welcome and refreshing change from Deku, Bakugo, or All Might getting most of the shine.

Heroes Rising is MHA at its core: an absolute delight to watch. While not as narratively tight as Two Heroes, Heroes Rising is paced very well and filled to the brim with off-the-wall action. The film is capped off with an absurd yet eye-popping climax. It’s “United States of Smash” levels of godlike epicness, but I can’t deny that the climax’s catalyst and resolution felt like the writer wrote the plot into a corner and couldn’t smoothly wrap things up. You’ll either love it or hate it.

After watching Heroes Rising, I now understand why the first half of the fourth season had some stilted animation. Visually, this is the best that the MHA anime has ever looked. Everything, from the scenery to the action choreography is on point. The climax has some animation cuts that would rival some of studio Uftoable’s best. That’s no exaggeration, either. It’s truly a sight to behold. Bones have outdone themselves.

I have always adored Bones’s audiovisual direction. Their ear for track placement and command over sound design never fails to amaze me. If there’s one thing you can count on with MHA, it’s Yuki Hayashi’s fantastic  score. Much like the main series’s score, Heroes Rising boasts a wonderful selection of music fitting for every mood. The final battle especially has the most beautiful song to come out of the series.

I believe MHA as a whole has one of the best English dubs in anime history, so to say that Heroes Rising delivers on that front would be pointing out the obvious. In regards to the new characters in the movie, my favorite casting choice was Zeno Robinson as Hawks. As brief as his appearance was in the film, his performance did one of my favorite MHA characters justice, and it just made me preemptively excited for season five. Dani Chambers and Maxey Whitehead gave class A, tearjerking performances as Mahoro and Katsuma. Otherwise, the rest of the regular cast brought their usual brand of Plus Ultra under the masterful direction of Colleen Clinkenbeard.

Heroes Rising doesn’t do much to revolutionize itself or go beyond the series’s usual shtick, but it doesn’t need to. Experiencing My Hero Academia has always been a fun, adrenaline-filled joyride, and the second movie is no different. The villains may be lackluster, and your mileage may vary on the ending, but Heroes  Rising is a spectacularly fun film that’s better than the sum of its parts. If you’re not a fan of MHA or fell off the train, Heroes Rising won’t do much to draw you in. If you need that high octane fix to tide you until the anime’s next big arc, then go see Heroes Rising, kick back, and enjoy the ride.

How you can experience the rest of My Hero Academia:

The series, as well as the first movie, Two Heroes, is available on Blu-Ray and DVD via Funimation

My Hero Academia is streaming on

Additionally, the entire manga, as well as its spinoffs, is available on the Shonen Jump vault.