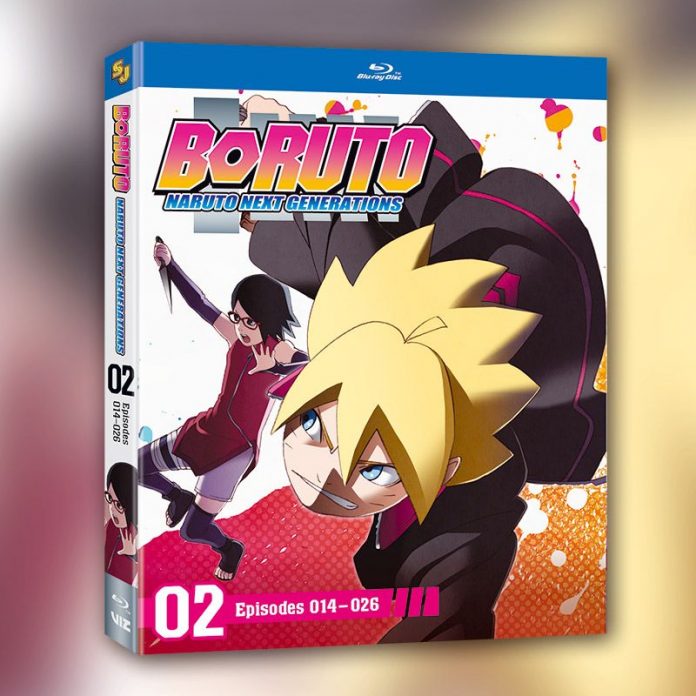 It can be a tough task for a studio to create compelling filler arcs. These types of decisions can have a lasting impact that could either enhance or detract from a series. Boruto: Naruto Next Generations has the tall order of trying to create exciting storylines that weren’t depicted in the manga. This series starts as filler, which can be a hard pill to swallow, primarily when the last Naruto film covers the first story arc of Boruto. So the studio is forced to play a delicate game where they can’t create any plot holes, but rather make some interesting stories to keep viewers engaged. The biggest question is, can Boruto continue to hold interest with their original story? Cause if it can’t, then there won’t be anything that can put this series in the good graces of Naruto fans.

The second volume contains episodes 14-26, as we see the finale of how Boruto and Mitsuki stop Sumire from using Nue to destroy the Hidden Leaf village. In one episode, Boruto makes the impossible choice possible as he’s able to make Sumire release herself from the Gozu Tennō, and atone for her crimes. Sumire turns herself in, leaving her fate up to the higher-ups whether or not she’s allowed to return to her normal life. Naruto and his staff absolve Sumire of her crimes, but I doubt she’s off the hook. However, this arc wraps itself up as we are then following the main cast as they continue to enjoy life during this time of peace.

It isn’t until episode 17 where we reach the next big story arc, as the series shifts to focus more on Boruto’s rival Sadara. She’s been missing her father (Sasuke) and has begun to rebel toward her mother, wondering if they are mother and daughter. The two have a terrible fight, leaving both Sakura and Sadara in tears, but a chance arises when Sadara overhears that Naruto plans to meet up with Sasuke. Sadara, accompanied by Chōchō (who also wants to find her birth father), follows the Hokage and gets caught up in a fight with a boy who calls himself Shin Uchiha.

Sadara closely follows Naruto for this once in a lifetime chance, but instead is caught up in a death battle with a boy named Shin Uchiha. Naruto rescues the two girls and later reunites with Sasuke. Their reunion is short-lived, as the boy, who attacked Sadara, is with an older individual, also going by the name Shin Uchiha. He attacks and ultimately kidnaps Sakura, who joins the fight to help protect her daughter and husband. We find out that Shin is a previous experiment of Orochimaru, and had a fixation on Sasuke’s brother Itachi. He wants to recreate the Akatsuki and will use the younger Shin’s (his clones) to achieve his goals. Naruto, Sasuke, and Sakura do whatever they can to stop Shin’s evil plot, and try to save the clones, all the while Sadara watches how her father operates and finds out more about his troubled past. In the end, Shin is defeated, and all of his clones are welcomed into the Hidden Leaf village. And Sadara becomes closer to her family, creating a happy moment for viewers. It was after this story arc that she declares her ambition of becoming the next Hokage (sounds familiar?).

I find myself in an odd spot because I was disappointed seeing so many Naruto Shippuden characters take center stage from their kids throughout this release. It was fun to see the old squad seven team up again during the Sadara Uchiha arc, bringing back old memories of the Naruto series. But I don’t want these reunions at the expense of the future generation. Sure, it was a tremendous growth moment for Sadara, who finally has a cherished memory of her father, and has become much closer to her mother. It was a touching moment, and fans got to see the growth of a character who was only viewed as a foil for Boruto. But I’d like to see Sadara be the one to save the day instead of Sasuke, Sakura, or Naruto, because as it stood, she was more of a plot device to force the former team to reunite. It continually feels like the children aren’t allowed to shine, and I find that most frustrating with this series.

I’ve written before how I’d like the “Naruto lifeline” to be used sparingly, if at all. But in this latest release, it feels as if this series is just a continuation of Naruto Shippuden, with the children used as props and a way for fans to celebrate which “ship” won in the end. Boruto needs to establish itself as its own series; otherwise, the idea of it being an unnecessary spin-off will never leave. And sadly, with this release, that feeling wasn’t shaken off.

That isn’t to say there weren’t enjoyable moments in this volume. The final fight between Boruto and Nue was animated beautifully and took me by surprise, since it was the first episode in the release. Mitsuki and Sumire also provided a memorable fight that looked stunning. Plus, watching Sakura fight hand-to-hand against Shin blew me away with the animation quality, and was easily the best moment in volume two. It gave me chills and even had me a bit nostalgic when she first fought Dosu. And while the involvement of the children were few and far between, when Sadara and Chōchō found themselves locked in battle I couldn’t look away. But beyond that, there was too much downtime to hold my interest. Sure, there were fun moments, like when Iwabee and Metal were arguing over who was the best Kage. Or seeing Konohamoru teach Sadara what he knows about the Sharingan. But there was too much fluff and I wanted storylines that were more impactful. And I wasn’t a fan of seeing Himawari knock out her father, delegitimizing Naruto as Hokage in my eyes.

And oddly enough, I found myself more interested in this School Trip story arc, due to the history of animosity between the Leaf and Mist village. While I’m not the most avid Naruto fan, I’m familiar with how the two parties hated each other. So seeing how both communities are trying to grow and bridge a gap between their people was compelling. While the Kage of the Mist wants to strengthen the bond between the Leaf village, that doesn’t mean his people agree. It gave a semblance of realism that was relatable, and I hold out hope that the story arc will conclude adequately. I wish that the volume didn’t end squarely in the middle of the story arc (like the first volume did), but it does make me excited to check out the third volume soon.

The English cast continued to be as amazing as it was in the first release, with the usual suspects impressing me once again. Both Amanda C. Miller (Boruto) and Cherami Leigh (Sadara) did a fantastic job bringing their roles to life. And fan favorites like Brian Donovan (Rock Lee) and Liam O’Brien (Gaara) put a massive smile on my face, knowing the personal history I have listening to both characters through the years. There wasn’t a weak performance at all, and I’d have to give my highest grade to Erica Lindbeck for her performance as Sumire. Her emotional moments, such as her feelings of regret and sorrow, were tremendous. And her return to the academy hit me more emotionally than I expected.

In this volume, VIZ Media adds a few extras, including an interview with Amanda C. Miller. Fans are also treated to some chibi stickers, which I found cute. Other than that, an art gallery, storyboards, textless songs, and other trailers were included.

I’m not that down on Boruto: Naruto Next Generations. It isn’t easy to get invested when the series seems to focus on the older Naruto characters more than the kids. I enjoyed having a story arc follow Sadara, and can deal with the appearance of Sasuke and Sakura. But I felt like this volume could’ve been placed in Naruto Shippuden, and fans wouldn’t know the wiser. I’m hopeful that this school trip plot will be able to gain some traction, and I hope that Naruto and the old shinobi stay on the sidelines. But at least the animation quality peaks at the right moments, as Boruto is trying to create memorable fights that resonate with fans. So far that’s been the series’ biggest strength, and I hope that continues in the future.

Cons: Felt there were too many cameos of Naruto Shippuden characters; Too much downtime in episodes; volume ends in the middle of an interesting arc (again).