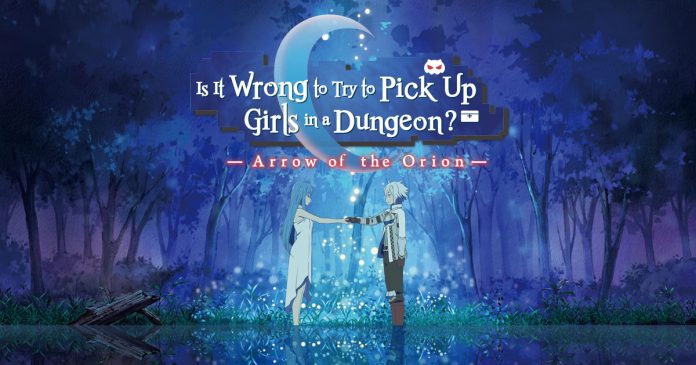 Is It Wrong to Try to Pick Up Girls in a Dungeon? (aka DanMachi) has exceeded the expectations I had when I first watched it. In 2015, fans latched onto this series, making it one of the hotter titles during its simulcast run. Many loved the characters, the lore, the battles, and the hijinks that gave viewers a bit of everything. Now as we fast forward to today, more content looks to be in store for DanMachi that should offer something better than the side story season fans got in 2017. A second season is in the works, but before that, a new film for the franchise also came to fruition. The film titled Arrow of the Orion debuted in Japan in Feb of this year and Sentai Filmworks is in the process of releasing it in the U.S. Toonami Faithful got the chance to see it before it hits theaters and we want to give you all the details. While it may be an original story, it was written by the author of the franchise (Fujino Omori), which made the film much more enjoyable and something people should check out on July 23.

The story takes place during the New Moon Festival, which is an ancient holiday that predates the gods. Here we see Bell, Welf, Lili, and Hestia all join in on the festivities. While enjoying themselves, they hear about a challenge that was set up by Hermes to see if anyone was brave and strong enough to lift a legendary spear from a stone, wondering who would be chosen by this blessed artifact (much like the King Arthur fable). Whoever was successful would not only get the spear but get an all-expense-paid trip around the world. To the surprise of no one, Bell tests his strength and was fortunate enough to lift the spear. Now that the spear chose Bell, Artemis reveals herself to be the sponsor of the event and pleads for Bell (or, as she calls him, Orion) to leave Orario to the Ruins of Ersos. Her Familia found a formidable monster called Antares that is causing destruction and Artemis was looking for reinforcements to help. Monsters that haven’t been seen before are destroying villages around the Ruins of Ersos, causing massive loss of life. Bell and the gang do what they can to exterminate as many of them as they can, seeing just how terrifying these monsters are as well as how strong the spear is.

However, Hestia notices a lot of personality changes with Artemis, wondering if she is the goddess of chastity. Hermes does his best to downplay the differences, but Hestia is convinced something isn’t right. Later on, Bell and the gang meet up with Hermes’ Familia as well as their friend Ryu and devise a plan to take down Antares. As our main heroes draw closer, they realize that the ruins have been turned into a nest where Antares was producing a large number of monsters. It was so bad that the monsters in the dungeon were acting up and started to enter Orario, due to a large bow and arrow in the stars pointed right at the dungeon. With that Bell fights Antares only to find out that it slaughtered Artemis’ Familia and captured the goddess, with our heroes fighting with remnants of her spirit. Bell is forced to kill the goddess to stop this monster from destroying everything, and with all of his might, Bell succeeds in killing Artemis. Bell, after a bit of consoling, comes to terms with what he did and returns to Orario to start his newest adventure.

I was surprised at how emotional this film became the more the story unfolded. While DanMachi has its dramatic moments (in the anime), the theme of love and life touched me in a way that caught me off guard. It was beautiful hearing Artemis talk about how love can survive for thousands of years. She believed that even if people die and are reincarnated, their love can transcend time and survive no matter how long the wait is. So the two parties might not know their past love on the surface, but on the inside, they do. And it was touching how Artemis began creating a connection with Bell through her philosophy. It gives new meaning to a hopeless romantic and being able to hear how vital finding that special someone is moved me. I was expecting the typical antics you get when a new female lead enters a “love triangle.” Instead, Artemis instills some wisdom involving life, death, and love that makes her indispensable in Bell’s eyes. The two became close and I enjoyed how natural that progression felt.

we are so so SO excited to be able to share this with you #AX2019 pic.twitter.com/XUexYdrTYd

Forcing the entire weight of not only saving the world but slaying a goddess on Bell made the pathos of the film shine brightest. Bell has become a character who symbolizes optimism and perseverance. No one took him into their Familia and thanks to him not giving up, he is now on the fast track of becoming a great adventurer. Unlike killing monsters for levels and money (which is easy), Bell had to kill Artemis so Antares couldn’t use her power to destroy everything. And this wasn’t a group effort to slay the monster. Bell had to kill it alone and in turn, kill Artemis. You see a side of Bell that hits your heartstrings as he feels he failed doing what adventurers are supposed to do (save everyone). He was apoplectic, and seeing him drowning in sorrow gave DanMachi a level of severity that I hadn’t noticed before. There are consequences to every action Bell and his friends take. They had to kill her, but Bell treasured Artemis, so having to slay her took a toll on him. Thankfully, Hestia was able to remind Bell of how Artemis will return at some point, which put a smile back on his face. The emotional moment when Artemis is killed by Bell was a high point and once again brings attention to how amazingly entertaining anime can be.

For those who enjoyed the first season of DanMachi, you’ll get what you want, as Bell, Hestia, and the rest of their party go out on this mission. Plus cameos of other vital characters like Hermes, Ryu, Asfi, and even Ais in a few scenes. While this film is an original concept, it quickly felt as if it could have been the next chapter of the story, and gives fans enough cameos of minor characters to feel satisfying. A lot of that is also due to Omori writing the story for this film. And I’m thankful for this trend of the authors writing the story for a new movie to create a tale that makes sense. It gives an incentive for purists to check it out, and the tone and feel of the film doesn’t stray from what the anime established. Arrow of the Orion should be viewed as an extra, giving fans more content about a world they’ve come to love.

Even the action looked amazing (albeit there wasn’t as much as I would like). The final conflict against Antares was a spectacle for the eyes, especially when Bell finally took down the beast. The animation drew me in and the explosions after the final battle were up to the standard you’d expect in films (although explosions have always been a massive strength of DanMachi). I believe the final fight will be the one that many tend to look back at the most. But the battle we see with Bell and Artemis against the lower level monsters Antares created (near the beginning of the film) was the best action of the entire movie. Watching Artemis with her weapon was captivating and looked cool as she protected some villagers. Plus, getting to see Bell jump into action and tag team with Artemis gave me chills, seeing how much he’s grown as an adventurer. The two worked well together, and watching the fight choreography of this particular battle left a great impression on me.

The film was in Japanese with English subtitles, which makes it a little bit harder for me to critique the acting. For the most part, I felt like everyone was hitting the right tone and cadence to evoke the right emotions. But because I’m not fluent in Japanese, it’s hard for me to say anything negative or overly positive about it. It felt fine, and I didn’t think that any of the high pitch voices were annoying (quite the contrary, in fact). Hopefully, this film does well enough for Sentai Filmworks to look into producing an English dub in the future.

Bell's beautiful white hair 😍 Only 20 more days until we see more of it in the DUBCAST edition of Season II!

Is It Wrong to Try to Pick Up Girls in a Dungeon?: Arrow of the Orion will be getting a theatrical release on July 23 (one day only). It even got a screening at Anime Expo to help promote it to more fans down the road. If you are a fan of the franchise since it hit the scene in 2015, I cannot recommend seeing this enough. For an original concept to feel like it was part of the original light novels is a crime, and Arrow of the Orion nails everything you want for an anime film. I laughed, I cried, I yelled in excitement, all thanks to an adventurer that Hestia took a chance on. DanMachi has been such a pleasure to follow and I cannot wait for the second season and quite possibly another movie in the future!