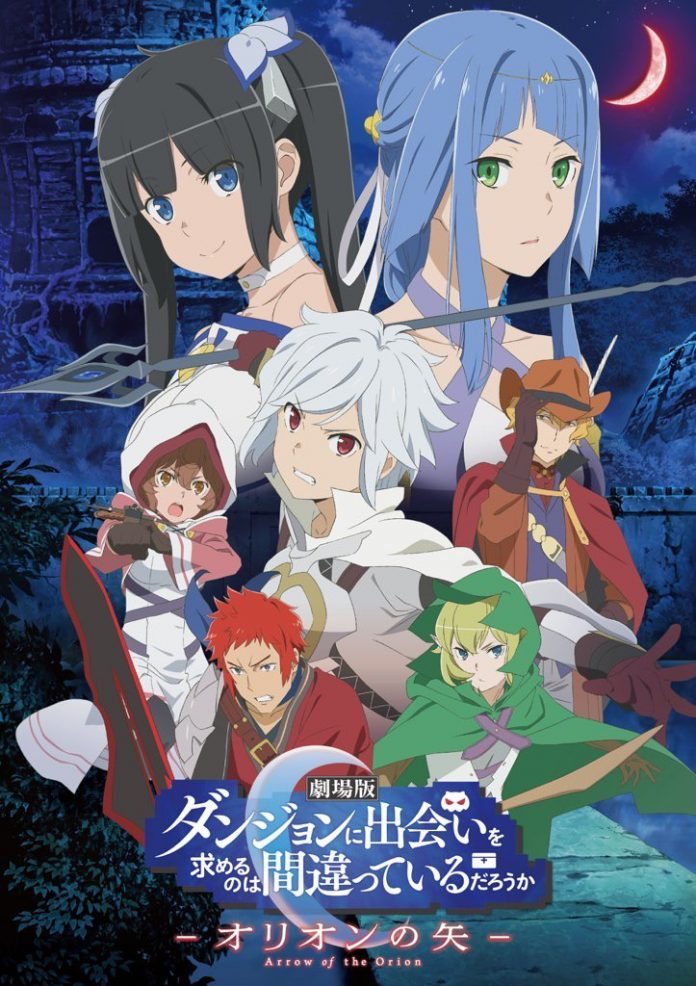 Earlier in the year, Toonami Faithful got the chance to preview Is It Wrong to Try to Pick Up Girls in a Dungeon?: Arrow of Orion before it was in theaters. While I was impressed with the film, I was saddened that I didn’t hear the English cast of a series that is special to me. To my surprise, Sentai Filmworks commissioned an English dub for the film and is now ready for fans to grab. If you were craving more Bell and Hestia, this film is right up your alley and should be on the shortlist of films you pick up.

Since Toonami Faithful has a more in-depth review of the film, you can check out that article here. In this review, we will focus mainly on the English dub, as well as the packaging Sentai Filmworks provided. If you aren’t familiar with the franchise, I’d suggest watching the first season of Is It Wrong to Try to Pick Up Girls in a Dungeon? (DanMachi) before diving into this movie. This feature complements the first season and the side story season, reinforcing the world this franchise has created. The synopsis of the film reads as follow from Anime News Network:

In the city of Orario, beneath an impossibly tall tower, lies the dungeon. Only adventurers who form partnerships with the gods themselves have any hope of defeating the monsters that lie within. But the dungeon is not the only place where monsters exist. Far from Orario, in the ruins of an ancient city, a new threat arises. To counter this threat, the goddess Artemis has come to Orario in search of a champion—but it’s not Ais Wallenstein (the legendary Sword Princess) nor Ottar (the strongest warrior to ever enter the dungeon) that she chooses. Rather it is Bell Cranel, a newbie adventurer partnered with a low-tier goddess.

I wish I had noticed the breadcrumbs left earlier in the movie involving Artemis. Her risking her life so blindly when she and Bell save civilians from monsters, as well as her not wanting to eat, really gives away that something is up. Besides her personality switching from what Hestia remembers, it should have been clearer to me that Artemis was already dead. She even mentions how her familia is no longer with her when she has a heart-to-heart with Hestia. I think that the storyline will be abundantly clear and might take the fun out of the series, knowing that something sad is on the horizon.

However, seeing Arrow of Orion again gave me more of an appreciation of Hermes. He’s so similar to Frieya in how he schemes with everything he does. Despite his antics of peeping and being outwardly silly, he’s conniving, which creates a fascinating character. His persona would easily get under the skin of many. But it’s the learning of his plans that makes the character a lot of fun to watch. He sets up Bell to not only become a stronger hero but to bear the burden of killing a Goddess. Hermes knows how everything was going down and uses everyone he can as his puppets, quite masterfully. Unlike Freiya, his motives seem to be more in line to make Bell and Hestia stronger (instead of destroying them). This film helps makes Hermes my favorite character and I cannot get enough of his schemes whenever DanMachi is on. I have a feeling that people will notice that and will learn to enjoy it whenever he shows up in future projects.

As for the English cast, everyone returns to reprise their roles, which is something I never take for granted. So the fact that Sentai Filmworks could grab everyone is something I’m incredibly thankful to hear. Oddly enough, some of the characters sounded different than they did in the first season, with Bryson Baugus front and center. At first, I couldn’t tell if it was him behind the mic for Bell. After a bit, I could tell it was Baugus, but Bell sounded less youthful than during the first season. Maybe this is to show how Bell has grown through his adventures, but it sounded deeper than I’m used to. I’m not sure if that was a choice by either the director or actor, but it doesn’t ruin the film by any stretch. It’s just different and took me a bit to get used to it. And surprisingly, Baugus wasn’t the only one. Christina Kelly and Serena Varghese (Loki and Asfi) also sounded deeper. I’m not sure if that was a creative choice or what, but they both sounded a little different from what I recall in the first season. We should take into account that the series first season was dubbed in 2016 (possibly in 2015 even), and voices can change in that amount of time. But again, the fact that the voices sounded different didn’t detract from the film. I’d even argue it helped make the characters seem like they’ve grown along with the fans.

Luci Christian once again steals the show with her performance as Hestia and I love how she was able to nail every aspect I’d want from the character. No other actress can replicate the bubbly joy that Hestia exudes throughout this series. Christian continues to prove “Hestia is ‘Bestia” in being able to voice a certain charm in her character. Even during the more dramatic and jealous times, Hestia never sounds annoying and was quickly the most significant highlight to hear. I also give a nod to Benjamin McLaughlin for his performance as Hermes. McLaughlin does a great job, providing an excellent trickster tone, which also implies that he knows everything. This role was made for McLaughlin, and he was able to harness Hermes’ trickster persona down pat. A newcomer to the franchise, Avery Smithhart, also did a fantastic job as Artemis. Not only did she sound like the pure maiden herself, but she also delivered an impactful performance at the film’s climax. It was something special, and I’m sure many fans will agree.

Surprisingly, I was expecting more from Sentai Filmworks in terms of the home media release. DanMachi is a colossal title they licensed and was awaiting a limited edition release, as they did for No Game No Life Zero. I’d wager that DanMachi is more popular since that franchise is currently airing its second season (unlike No Game No Life). Not to mention that there wasn’t much in the form of extras. The only things included were Japanese promos. I’m shocked Sentai Filmworks didn’t include any cast interviews, commentary, Japanese interviews, or showcasing an event at Anime Expo. So I’m disappointed. It’s in a standard Blu-ray case with no slipcover (which is how Sentai Filmworks usually package their releases).

Have you watched Arrow of the Orion yet? 🏹 Relive the story in a return of this Long Tale! pic.twitter.com/3DASs9wioU

I’m satisfied with the home media release for Arrow of Orion and it’s a must-watch for fans of the franchise. I wish Sentai Filmworks did more in the packaging. I was expecting more extras and a limited edition release, due to how popular DanMachi is. Performance-wise, I’m left with a favorable impression and find this cast to be a special one. I’m glad that besides the now three seasons they’ve been able to produce, that they were able to give something extra to those who truly want to know if it’s wrong to pick up girls in a dungeon.

Pros: A fun story that gives DanMachi fans extra content; the entire English cast returned for their roles; Luci Christian and Benjamin McLaughlin’s performances; a touching story about love that will make you emotional.

Cons: Was hoping for more extras or a limited edition release.