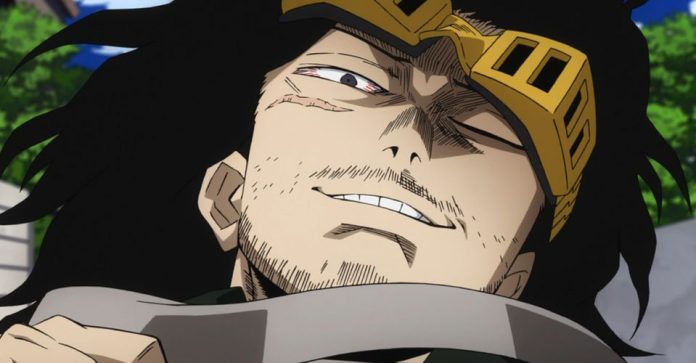 The story in My Hero Academia is a classic one: a tale of how Izuku Midoriya (Deku) becomes the greatest hero of all time. As the seasons progress, we see what the pro hero All Might meant to him, and how his talented classmates like Bakugo and Todoroki influenced Midoriya’s passion for being the best. As it is with anyone, people will always remember who pushes us to be greater. But there is one character who I’d put in the same spot as All Might that I don’t feel has received the same amount of attention: the teacher who acts like he doesn’t care, Eraser Head. Being Midoriya’s homeroom teacher, Eraser Head should be given a ton of credit for helping to shape our protagonist into the hero he will be in the future and I find it criminal how little buzz he seems to get, both in his world and ours.

“This has nothing to do with me. Each of them is powered by their own drive to succeed.” – Shoto Aizawa Episode 16

It’s easy to look past Eraser Head due to the kind of hero he is. He’s more of a work-behind-the-scenes person and prefers a more clandestine type of assignment. And his distrust of the media further cements his desire to stay out of sight. And as fans, we were introduced to him as a foil character opposite Midoriya, trying to expel him on his first day. He’s the anti-All Might when it comes to teaching, as his philosophy on preparing students differs. Eraser Head wants his students to be perfect and doesn’t accept those who he deems unworthy. It was easy in the first season to be annoyed with him for picking on Midoriya, but as more episodes pass everyone can see the kind of teacher and person Eraser Head is.

I enjoy both styles of teaching/support shown in My Hero Academia. It displays an interesting contrast of what kind of mentors adolescents might want. All Might represents mentors who are generally more supportive, highlighting words of encouragement. To mold young minds, All Might strives to be a positive guiding light for his students, just like he was for the general public. And instead of breaking people down to later build them up, he would rather have his students know what they do well alongside with what they need to work on to create a balance in his teaching. This is essential in life, because if you are barely supported in the accomplishments you make, you won’t feel any satisfaction in things that are worthy of praise. It is important not to let anyone’s ego inflate, but the power of an “atta boy” can be an effective motivator.

But Eraser Head’s way of training young heroes is important too. Building up every recruit, like Bakugo was in his early life, could lead to some theatrical faiure, resulting in a mental breakdown or worse. So the stern push Eraser Head provides shouldn’t be completely absent with Class 1-A. When we are introduced to Eraser Head, he singles out Midoriya about how his quirk doesn’t help but rather makes him a liability (since early on his body was destroyed using One For All). As a teacher, he doesn’t want to endanger students to perish, so he instills harsher lessons to prepare the next generation of heroes for the real world. He’s not trying to be anyone’s friend but to help students survive in a cold world that could reject them or worse.

Eraser Head’s method of teaching might not be everyone’s cup of tea, but his actions make him more endearing. Underneath his cold and dismissive exterior lies bountiful levels of loyalty toward his students and U.A. Even in season one, we see how important his students are to him as he takes on a whole gang of villains to keep the children safe. Seeing Eraser Head take action like that made him an early favorite for me. Sure, he’s rough around the edges, but stepping in to take on everyone for the sake of his students shouldn’t be unnoticed by either the storyteller (Midoriya) or the viewers (especially considering how Midoriya initially didn’t believe Eraser Head could handle many of the villains on his own). He ended up getting ravaged to protect everyone, but he showed what the future heroes are looking forward to, while still giving everyone the necessary support through his actions. He may be tough, but his love for his students is real and tangible.

And these moments of Eraser Head fighting the enemy to protect his students seem to happen more often than not. He put his life on the line again during the third season to protect the hero classes from ambush by the League of Villains (most notably Dabi). Despite his aversion to public appearances, Eraser Head confronted the media and took full responsibility for what happened at the summer training camp incident. He vehemently defended Bakugo when a reporter implied the kidnapped student would fall to evil. Seeing Eraser Head stand up for Bakugo was a touching moment, and having him explain how U.A. would make sure students stay safe only strengthened what fans perceive as compassion. And that only scratches the surface of what he did for his students in the classrooms, for example helping Yaoyorozu regain her confidence from her disappointing showing in the sports festival and saving Tsyuu’s life from being seriously hurt by Shigaraki. If My Hero Academia was told in a more multi-perspective style, I think Eraser Head would be given more credit from the world itself, and would help fans more accurately interpret all the little signs given.

Throughout the series, Eraser Head progressively grows fonder of his students. During the provisional license exam, Eraser Head went on to praise the two students in Class 1-A who seem to galvanize the students (Midoriya and Bakugo), and how proud he was of his entire class. It was very poetic and I found it touching, considering that Eraser Head threatened to kick everyone out on the first day. But I think what many might have missed is how Midoriya has begun to influence his homeroom teacher. Seeing Eraser Head soften his stance and even mention the potential Midoriya has is proof enough that the student is influencing the teacher. And Eraser Head trusted the young hero to stay safe during the training camp incident, when normally he would stop a student in their tracks. It’s a nice added benefit for viewers to see how Midoriya (and other students) can bring out different emotions from adults.

I wonder when Midoriya will realize that Eraser Head might be as crucial as All Might and Gran Torino in his development. I understand why All Might is given the most recognition. He told Midoriya his dream of becoming a hero could happen and bestowed the power of One for All. Midoriya diligently follows the same path All Might made and influenced him in many aspects so far. But with everything we’ve seen happen in My Hero Academia, it seems like Eraser Head has done just as much and in a better way. He’s been teaching Midoriya in the all-important first year of high school and has swooped in to save his students on multiple occasions. In My Hero Academia, the greatest successes we’ve witnessed can be traced back to an even greater homeroom teacher, as we’ve seen with All Might and Gran Torino. So seeing the few moments where Eraser Head influenced Midoriya doesn’t feel right, especially since Eraser Head has taught important lessons to Midoriya as well as everyone else.

I think that if My Hero Academia was told with more perspectives instead of Midoriya’s, then Eraser Head would be viewed differently and resonate more with Class 1-A as a whole. From where I’m standing the only real lesson I’ve seen Midoriya utilize that Eraser Head brought to his attention is learning to control his quirk in order to be a hero instead of a victim. This is important, but it’s a lesson that All Might, Gran Torino, and even Recovery Girl mentions, making it feel less impactful coming from Eraser Head, despite his first lesson after the summer camp incident. Eraser Head laid the foundation, but it was other pillars that took the spotlight from the hero. And while Eraser Head would prefer not being in the spotlight, I don’t think he should be in this lesson. I need to see more tangible lessons involving the two parties, and that’s only because My Hero Academia is being told by Midoriya. If this was just a story about a class of heroes, I think we’d see more moments where students talk about Eraser Head being the guiding light to be a great hero.

There are people in the world who have a thankless job, and Eraser Head epitomizes that more than any other character. He isn’t interested in credit that will get him noticed; he finds satisfaction in getting results, which is why I’m drawn to him. When it comes time to give credit to those that drove the students to become great heroes, Eraser Head’s name should be mentioned immediately. Early on, he was strict, but it was for all the right reasons. Yet when the cards were on the table, Eraser Head didn’t hesitate to protect his students despite the odds and danger. He’s an absolute treat to watch, and watching as his ideology soften toward his students has been something to see. Not only can the hero Deku inspire great things in his peers, but in his predecessors as well.