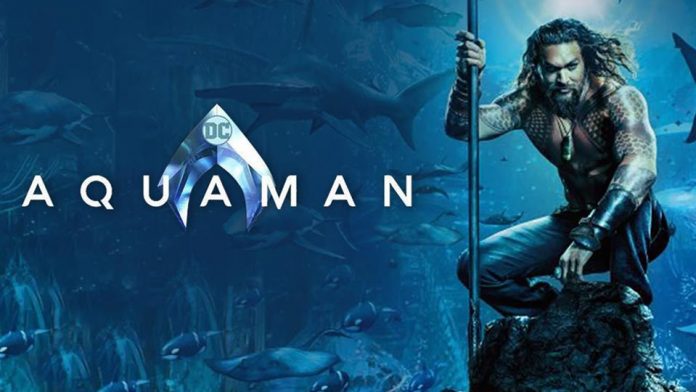 Loaded with action and packed to the gills with special features on the Blu-Ray, James Wan’s Aquaman did not disappoint. It’s the comic book film the DCEU deserves…and needs.

I have to start off with a proverbial round of applause for the man, himself, and his creative team. The captivating visuals of Atlantis, and the techniques Wan uses to shoot—both on dry land and “in the water”—is phenomenal. The angles he chooses to shoot from in some sequences, framing of certain shots so the characters are center, but also not all that we’re meant to focus on, how all the action is so well-choreographed…it’s all great.

Nearly every aspect of this film floored me. Put off by some of the de-aging effects—as the technology is still in its infancy—I have very few qualms with Aquaman.

Some of the special features speak to Wan’s insistence on having as many physical effects, sets, or set attributes as he could muster. In “Going Deep Into the World of Aquaman” and “Aqua-Tech”, we see just how much effort was put into not only getting stuff to look good, but what made practical and realistic sense, too, even though this film—technically—falls into the sci-fi genre. None of this would’ve been possible even just a couple years ago; the modern CGI techniques and ways of doing things just weren’t present. According to one of the PAs involved, Industrial Light & Magic had to totally re-work some of their existing tech, to accommodate the large, visual workload of the film, as discussed in the “James Wan: World-Builder” feature. Wan—being such a creative director, anyway—wanted to really bring the comic pages to life, and used a lot as inspiration, when working with his design and effects crews.

Even if I pored over this thing a dozen times, stopping every few minutes at a visually-engorged shot or vista—I’d never be able to pick out every last Easter egg or tid-bit.

It’s cool that I was able to pick out all the inspirations behind the many sea creatures in this, though—neat to see an artist’s rendition on them all, making every one visually individual. In “Atlantis Warfare” and “Creating Undersea Creatures”—along with a Dolph Lundgren-hosted feature called “Kingdoms of the Seven Seas”—we’re given an inside look at Wan’s desire to not only differentiate between all of Atlantis’s disparate denizens, but give them all personality, aspirations for their civilization, and have that all come across in the visuals (since some of them are only fleeting appearances). Neat text box tid-bits offer a further scoop on each identified creature, design aspect, and animatic, as well. Fun to pause and read up on some things that I may have missed from the film!

Costume- and set-design are also well-done, making even the slower scenes feel alive and corporeal, even if the set isn’t, exactly, in the real world. This is seen coming together well in the “Becoming Aquaman” featurette; much from the NEW 52 line was effortlessly incorporated into production—even down to some of the finer details. The submerged galleon, the opening submarine scene, the Sicily showdown, and the lighthouse bits were all filmed on ground-up-built sets. Even down to building water-filled panel “filters” for overhead lights, to give that semblance of being underwater when physically not, shows just how much this production meant to the crew. Shows studio confidence, too, in Wan and his team to create something audiences will love—and did love. Neat to see such scenes broken down, too, as in the “Scene Study Breakdown” featurette, which shows some of the higher-tempo sequences picked apart into their component pieces… A bit of a nod to lovers of movie magic and how such feats are achieved!

Jason Momoa’s charisma is ever-present in his portrayal of the titular reluctant hero. His character of Arthur Curry is, first and foremost, a big kid in a world of growling, grumpy adults. He’s never not absolutely astounded by everything he sees around him…that inborne curiosity of being the product of two very different—yet ultimately eerily-similar—worlds. Cocky, but his abilities speak loudly for him when they’re called upon. Funny and fierce, I could not see anyone else being cast in the role, now. If there was one thing I knew I’d take away from this movie, it’s that he would steal the show.

And that, he did.

Aside from the more dangerous scenes, I’d imagine a lot was the A-listers doing their own stunt-work; Momoa, himself, says he enjoys doing his own stunts, when he’s permitted to.

Amber Heard is cool, as well, as the powerful, if sometimes marginalized Mera; we get some insight into the formation of her character and Nicole Kidman’s Atlanna in the “Heroines of Atlantis” featurette. The inevitable romance between Mera and Arthur is a bit shoehorned in, but the actors play off each other well, and have their own featurette dedicated to their work relationship.

Patrick Wilson (The Conjuring films, Watchmen) returns with his long-time movie partner Wan for one of, if not the best antagonist roles in the DCEU, thus far. King Orm isn’t complicated in his mission or motivations, but he believes he is right in them, and that is the deadliest aspect of a great antagonist: Believing they are the protagonist in their own story.

Willem Dafoe, John Rhys-Davies (Raiders of the Lost Ark, The Lord of the Rings trilogy), Julie Andrews, herself—voicing the mighty Kraken—Djimon Hounsou, and Temuera Morrison (Once Were Warriors, the Star Wars prequel trilogy) all make great appearances in the film, too—some more in-depth than others, but nonetheless entertaining to watch. A dynamic set of actors for a dynamic film.

I take my villains like I take my ocean trenches: Deep and dark and brimming with mystery; Black Manta is definitely all that…and more. Yahya Abdul-Mateen II’s character is further fleshed-out in the “Dark Depths of Black Manta” featurette, where we get a breakdown of his many comic origins, design, powers, and how the character was revitalized for the 21st century. Orm, too, is put center-stage for the “Villainous Training” bit; Jon Valera—the film’s lead fight coordinator—not only had his hands full on-set, but also in making sure the actors (Abdul-Mateen and Patrick Wilson, whom needed a good bit of work, he noted, for his character to even look intimidating next to Momoa’s) were doing all they could to be ready for the more physical scenes. Look forward to seeing both baddies again, in the follow-up!

Brimming with meta-humor, modern pop references, a sweet score and killer soundtrack—as well as an end-credits scroll that not only is entertaining, but also hints at the sequel—Aquaman (like Shazam! that followed it) is the way Warner should keep doing their DC movies: Helmed by earnest, passionate directors that take a chance to make audience-minded movies.

Kicking off a little rough, Aquaman is a wild ride through a fantastical world, created by one of the most visionary directors of our time. On top of that, it does what many—both devoted fans and not—could never have imagined: It made the superhero cool. From the myriad, memorable characters, their complex relationships, motivations, and goals, to the astounding visuals and comic book aesthetic, James Wan has done it again. Should he choose to stay onboard for the sequel, I think we’re all in for another, welcome treat.

Who says talking to fish can’t be cool?