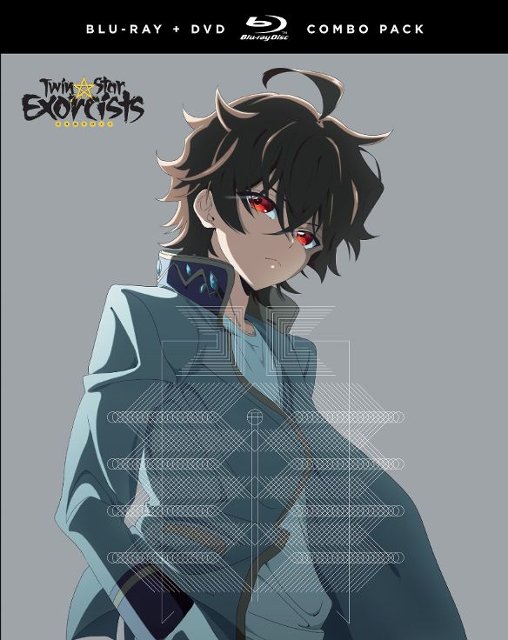 It feels like every year there’s that one anime that flies under everybody’s radar despite having all the elements to become a big hit. When Twin Star Exorcists dropped in 2016, I had only heard murmurs about its 50-episode run, with most of them echoing the “it doesn’t follow the manga” sentiment. I hadn’t read the manga at all, so I went into Twin Star Exorcists with absolutely no knowledge of the plot or any expectations of quality. After watching the first three episodes, I became a little surprised that something this simplistic faded into obscurity so quickly. Twin Star Exorcists seemed like a perfect starter anime for more casual viewers. As it went on, I began to understand why there wasn’t much fanfare about it. It’s not bad, but it’s not all that good either.

Kegare, evil spirits that dwell in a realm known as “Magano,” have terrorized humanity for hundreds of years. A group of spiritual warriors, the exorcists, have been doing their hardest to subdue the Kegare for generations, allowing humans to live a relatively peaceful life. With the sudden increase in Kegare activity, the chief exorcist in Japan seeks out the fabled “Twin Star Exorcists” who are destined to give birth to the most powerful exorcist, the Miko. Two fourteen-year-olds, Rokuro Enmado, a former exorcist traumatized by a tragedy two years prior, and Benio Adashino, a gifted exorcist prodigy, cross paths and are chosen to be the most likely candidates for filling the role of the Twin Stars. Faced with this forced prophecy, Rokuro and Benio now must balance cleansing the Kegare and living with each other.

As expected from a standard shounen series, Twin Star Exorcists has a basic level of characterization that borders on predictable. Outside of his dark past, Rokuro is your typical screaming screw-up character that’s only competent during battle. Benio contains many common traits of the “powerful stoic” character: a lack of relying on others, minimal emotions, quiet voice, a strong sense of justice, etc. As the story progresses, our Twin Stars begin to grow into something more than their tropes. Witnessing Rokuro grow out of his reluctance to return to exorcism for the sake of his family was a well-done emotional turnabout. It made me appreciate Rokuro just a little bit more. Benio slowly opening up to Mayura, and later Rokuro, made her all the more charming for me. Benio became a character I was quite fond of by the time this batch of episodes finished. Throwing away a lot of her stubborn pride, showing weakness, and a wider array of facial expressions added a wonderful dosage of humanity to her personality.

Unfortunately, the rest of the cast left minimal impact on me. It was as if a lot of the secondary characters were there one second and then disappeared halfway through. Ryogo Nagitsuji, Rokuro’s “older brother,” and his two comrades, Shinnosuke and Atsushi, are practically abandoned by the time episode six or seven come around. Ryogo did serve as a suitable  catalyst for Rokuro’s return to exorcism. During the action scenes, he and his two teammates only served to get their butts handed to them until Benio or Rokuro came along to save the day. Such a disappointing use of characters. Some of the other characters, such as chief exorcist Arima Tsuchimikado, Guardians Shimon Ikaruga and Subaru Mitejima, and Rokuro’s teacher Seigen Amawaka were intriguing. Their appearances were limited as their importance most likely comes later in the series.

We catch a glimpse of two primary antagonists in the series for a few of the episodes. Our main antagonist, Yuto Ijika, shows up in episode nine. His introduction came at one of the most pivotal points of character growth for Benio and Rokuro, and I felt that his overall presence was underwhelming. I found Yuto more annoying than anything, especially since he killed the climactic emotional moment between Rokuro and Benio before it could be explored more. It’s a shame because I think his appearance would have been more impactful if they just waited a little bit longer for Rokuro and Benio to mature. A humanoid Kegare, known as a “Basara,” Kamui, appears in episodes 12 and 13, holding a connection to Benio’s past. A simple “I need a challenge” character that kills and mentally tortures humans for kicks, I found myself more invested in him than our main villain.

The worst thing about Twin Star Exorcists for me is the addition of Benio’s familiar, Kinako. Kinako’s entire existence in this series boils down to brown-nosing the everloving heck out of Benio and nothing else. Every time he showed up and opened his mouth, I found myself groaning out loud. After doing some research about his origins within the whole franchise itself, my irritation and disappointment grew exponentially. Kinako first appeared in the anime, but later showed up in the manga under different, and much better circumstances. Kinako develops into a full character, with a complete character arc and no fanaticism of Benio. His existence in the anime is borderline puzzling with how much better the manga counterpart ended up.

The overall plot is nothing new, but it executes it just well enough to function. It’s a standard story of young warriors thrust into new scenarios due to destiny. The series stays fairly formulaic, presenting some daily life trouble until the Kegare attack. After the attack, the problem is resolved. Lather, rinse, and repeat until a major villain shows up. It gets a little bit tiring during the earlier episodes, when the characters’ personalities aren’t established outside of basic tropes. Later on, it becomes annoying in a different sense when there’s a whole episode dedicated to character building to force an obligatory Kegare battle at the end. It doesn’t help that a lot of the fights aren’t anything special. The whole decision to shoehorn a battle into every episode just seemed like a waste of valuable time they could have dedicated to the characters.

During the “daily life” segments, Twin Star Exorcists tends to have a fair number of attempts at comedy. Sometimes, it works, but oftentimes, it falls flat on its face. I did chuckle at some of the interactions between Benio and Rokuro once they begin living together. The silent side character, Tatara, is a completely ridiculous anomaly that gave me a lot of joy. Otherwise, the comedy boils down to one of the following: 1) dunking on Rokuro (bonus points if he’s compared to Benio), and 2) shipping two fourteen-year-old kids (a few times getting a tad bit on the extreme side, of which I wasn’t a fan). The worst part about number two is that it’s the most frequent form of comedy because it’s supported by the entire plot of the series itself (claiming that Rokuro and Benio need to have a child to save the world). As soon as Rokuro and Benio began living together, it was the only form of comedy present, and I was over it not even a full episode in.

Studio Pierrot isn’t a studio I particularly enjoy, thanks to their questionable adaptation choices and mid-grade (and sometimes low-grade) animation. Twin Star Exorcists sadly isn’t wholly immune to the “Pierrot curse.” However, the visuals aren’t as bad as I thought they’d be. Some of the action shots during the most pivotal moments are dynamic and extremely well-done. The  Japanese RPG-styled cut-ins that occur when a character yells the name of their finishing move were cool, and they admittedly gave me a massive smile on my face. Unfortunately, a lot of the other obligatory Kegare exorcism sequences are chock full of still images and some attacks that lack impact. There were also a lot of noticeably jank-looking faces and bodies further into the series, with some of the most egregious looking ones happening around episode 11. At the very least, the coloring and art style overall look great. The weapon designs, the runes that appear on the exorcists’ bodies, and the Kegare designs look fantastic. With some tweaking, this series could’ve been a visual powerhouse.

I was surprised by the soundtrack of Twin Star Exorcists. Several times while watching, I found myself grooving in my seat. There’s some standard sounding background music, but there are also a lot of neat electronic pieces, ranging from dubstep to trap as well. The rest of the sound design is solid, but not anything to write home about.

The English dub, recorded at Studiopolis, is overall decent. Most of the voices are serviceable, not much in the way of fantastic, with a few exceptions. Mayura, Yuto, Kinako, and most of the incidental background characters were the weakest links in the dub for me. They sounded the most awkward and had some spotty reads here and there. It didn’t help that Mayura’s voice actress, Laura Summer, previously voiced Patamon in the classic Digimon series, because that was all I could think of when hearing her talk.

On the flip side, Cassandra Morris gives an astounding performance as our heroine, Benio. Every facet of Benio, the stoicism, the scathing honesty, and especially her rare moments of weakness, shines brightly through her performance. Honestly, Benio might be my favorite role that Cassandra Morris has landed to date. I’m tempted to keep going with Twin Star Exorcists solely because of her. As for other dubbed highlights, Matthew Mercer as the chief exorcist Arima sounds silly and bombastic. It’s evident that he had a blast bringing Arima to life. Ben Diskin as Kegare powerhouse Kamui was a perfect balance of uncaring, sinister, and apathetic. Kate Higgins’s performance as Subaru Mitejima was somewhat unconventional and not at all what I expected, but the country girl vibe fit so well that it hurt.

TWIN. STAR. EXORCISTS! You can hear me as Benio starting July 24. Been working on this for over a year and just wrapped last week. Can't wait to unleash this beast on you guys. https://t.co/gJKPNiTbqZ https://t.co/NYJki3G33t

Twin Star Exorcists is a simple turn-your-brain-off series that’s not a bad watch. Unfortunately, questionable episode framing, mediocre comedy, and underwhelming action mar this series and keep it from being something better. I won’t say it’s an inherently bad series by any means, but it’s too unfocused to call a good series. I wouldn’t say no to continuing reviews of this series if given to me, but I’ll most likely stick to the manga if I want to continue the story.

How you can watch Twin Star Exorcists:

Additionally, the manga is available on the VIZ website through the Shonen Jump vault/app