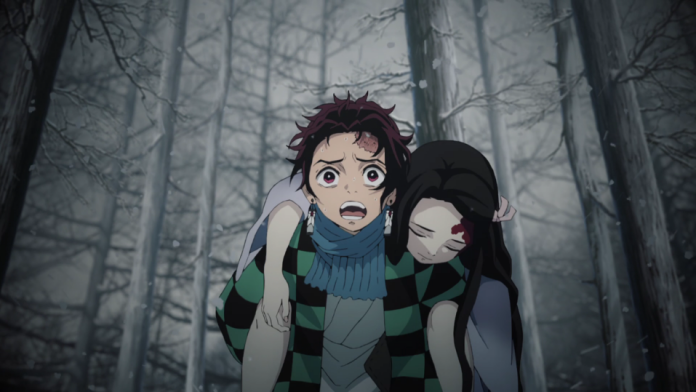 I have been a fan of Demon Slayer: Kimetsu no Yaiba since the very beginning, and seeing the series grow has been a wild journey. A year ago, the series only had a niche but passionate following in the western manga community. Now, the series stands as one of the most beloved anime of 2019, and soon the English dub will be making its way to Toonami. It’s truly a success story like no other, and as a long-time fan, it makes wholeheartedly happy. With that in mind, let’s take a look at why Demon Slayer will blow you away.

Demon Slayer: Kimetsu no Yaiba centers around the journey of a young boy named Tanjiro Kamado. One day, Tanjiro returns home to the sight of his sister Nezuko turned into a demon and the remainder of his family slaughtered. To find a way to turn Nezuko back into a human, Tanjiro sets out to become a demon slayer and find the demon who destroyed his family.  Along the way, he encounters fierce enemies and powerful allies, all while pushing himself to his limits to overcome every challenge.

Starting next Saturday at 1:30 AM, Toonami presents the debut of a series you’ve all waited to get dubbed. #DemonSlayer. Be there next week. Only on Adult Swim. pic.twitter.com/5eAcbImWhE

The series began as a manga in Weekly Shonen Jump back in Feb. 2016. Unlike some recent titles that have shown up on Toonami, Demon Slayer was not an instant hit in Japan. That said, Weekly Shonen Jump’s editorial saw a lot of potential in the series and did their best to promote it in every way possible. As a result, Demon Slayer has been endorsed by several prolific creators throughout its run, including Kinoko Nasu (Fate/Stay Night), Osamu Akimoto (Kochikame), and Yoshihiro Togashi (Hunter x Hunter). Those who read Demon Slayer understood how special it was, and it would not take long for its quality to be seen by the masses. As the series continued its run, its readership gradually began to grow, and soon Weekly Shonen Jump had a new star in the magazine.

While many people played a part in Demon Slayer’s success, all of it traces back to the efforts of the series’ creator Koyoharu Gotouge. Gotouge started their career in manga with their award-winning one-shot Ka Gari Gari in 2013. The following year, Gotouge was paired with editor Tatsuhiko Katayama, and the two started to plan out a serialized work for Weekly Shonen Jump.  In a recent interview for Manga Plus, Katayama mentioned how they initially wanted to serialize Gotouge’s third one-shot Haeniwa no Zigzag. But after those plans fell through, they opted to create a series based on Ka Gari Gari. Thus, Gotouge went to work on a storyboard for Kisatsu no Nagare, taking massive inspiration from their debut work. Unfortunately, Kisatsu no Nagare also didn’t make the cut for serialization, forcing Gotouge and Katayama to return to the drawing board once again. Katayama noted that the biggest issue with Kisatsu no Nagare was its dark premise and lack of humor, so he suggested that Gotouge create a protagonist that opposes those elements within the narrative. This suggestion led to the creation of Tanjiro, and by combining him with the ideas of Kisatsu no Nagare, the story of Demon Slayer: Kimetsu no Yaiba was born. The series overcame many hurdles to reach its current state, but the result was a manga that took perfect advantage of Gotouge’s artistic and literary talents.

Demon Slayer: Kimetsu no Yaiba is loosely based off Gotouge’s first one-shot Ka Gari Gari. You might see some familiar faces in it!#DemonSlayer #kimetsunoyaiba pic.twitter.com/59Mw5yXUz6

One of the best aspects of Demon Slayer is its main cast. Unlike many leads, Tanjiro lacks an ambitious personal goal, solely focused on saving his sister’s humanity and protecting his friends. His selfless nature is imbued into the core of the series and instantly makes him a likable protagonist. Nezuko is also a great character in her own right. She is a constant source of support for Tanjiro emotionally, and can even hold her own in a fight when necessary. Seeing her grapple with her demon nature is also fascinating and emotionally invests you in her story. Alongside the two siblings on their journey is Inosuke and Zentisu. Inosuke is a brash and loud-mouth fighter, but beneath his rough exterior, he cares deeply about protecting his friends.  Meanwhile, Zenitsu is a natural coward, but when backed into a corner, he’s capable of miraculous feats. Each character in Demon Slayer brings something unique to the group dynamic, resulting in a lovable cast whose story you want to see until the very end.

While Demon Slayer could be misinterpreted as a revenge story, its narrative conveys almost the opposite message. Tanjiro has no animosity towards the demons that he faces. Tanjiro sympathizes with their hardships and wishes to avoid conflict. At the same time, he understands that he must protect those around him and will fight for what he believes is morally correct. Demon Slayer emphasizes that no person is born malicious. Many of the demons that Tanjiro and his friends face were once normal humans, but they experienced hardships that warped their worldviews. No fight in Demon Slayer is simply a battle of strength. Instead, it’s a conflict of emotions and ideology, which makes it all the more compelling.

English dub of Demon Slayer: Kimetsu no Yaiba will be airing on Cartoon Network every Saturday at 1:30 AM from October 12th! Don’t miss it! pic.twitter.com/U3IV3cbZVC

Once Demon Slayer’s success became apparent, the biggest question on fans’ minds was who would produce the anime adaptation. Due to Gotouge’s distinct artwork, replicating the series’ world in animation was going to be a difficult task for any team. Luckily, the insane talent at animation studio ufotable took on the project with full force. From the very first key visual, it was clear that ufotable was placing meticulous detail into every facet of Demon Slayer’s production.   Director Haruo Sotozaki and his team have brought Gotouge’s world to life through the anime’s intricate environments and superb action sequences. The series’ high quality is additionally supported by a fantastic soundtrack from composers Go Shiina and Yuki Kajiura, who further immerse you in Demon Slayer’s beautiful world. It’s no exaggeration to say that Demon Slayer is one of the best Shonen Jump adaptations ever made, and it is a sight to behold.

Toonami fans have already seen their fair share of battle-shonen series, but Demon Slayer still brings a lot of value to the block. The thematic core of Demon Slayer is not like anything that has previously aired on Toonami, and viewers will be invested in its emotional messages just as much as the action itself. Additionally, Demon Slayer is a caliber of production rarely seen on the block. As mentioned before, ufotable put immense effort into making this adaptation flawless, and it’s immediately evident from the first episode. No matter how many action series you’ve seen, Demon Slayer will find a way to captivate you and make you invested in its world.

I waited three long years for Demon Slayer to explode in popularity, and now the series is on its victory lap. Every step of the way, Demon Slayer has proved to people that it is a story worth experiencing, and it will continue to do so on Toonami. I’m excited to see the dub premiere on the block, and I look forward to more people falling in love with this series.