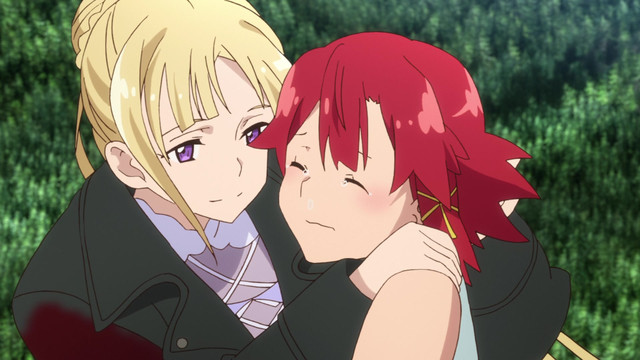 We tend to learn through the years that a happy fairytale ending is hard to attain, if not impossible. There’s a reason that the classic Disney stories such as Cinderella, Snow White, etc. all have a much happier ending in the classic movies as opposed to what Aesop’s fables had originally written. People would rather have a happy ending, considering how rare they are in actuality, and Izetta the Last Witch personifies that sentiment, using happy ending tales to give people hope because the cold reality is rarely that romantic. After its original run in the simulcast season, how well does Izetta the Last Witch hold up vs. its more maligned reputation?

We are taken to an alternate world during the World War II time. The Germanian Empire has begun their conquest of Europe, taking out smaller countries left and right with their advanced military power. To continue securing more land, they take on a small country called Eylstadt, where our main heroine Archduchess Fine tries her best to get aid from other Allied Nations. She wants to do whatever she can to help stop the invasion of Germania no matter the cost. However, she is thwarted and is captured by the Germanians. When all hope seems lost, another prisoner, along with Archduchess Fine, named Izetta, breaks free and helps the Eylstadt princess escape. But Izetta is not a normal girl. She is a witch and the last of her kind, and decides to help Fine (who happens to be a close friend) and use her powers to stop the Germanian army from conquering the world. In Eylstadt, they have a legend involving a witch called The White Witch, who was the savior of the country. After falling in love with Alestaff’s first prince, she vowed to help the country survive for him. But as the story goes on, you find out more about the tale, and why it’s a lot more tragic than the inspiration that it gives the Eylstadt people.

As far as alternate World War II anime, this series seemed to be most realistic (that is if witches were real). The setting, tone, and atmosphere all felt like you could be watching how World War II actually happened. I think that Izetta the Last Witch should be praised for its efforts. Especially when Eylstadt decided to parade their secret weapon (Izetta) around for the world to see her might. We were given a glimpse as to what life was like back in the 1940’s. We saw newsprint articles describing her power, as well as a video that was black and white in a standard 4 by 3 ratio. It gave off the feeling that this was more historically accurate than you’d think. Even the way that countries were named (Britannia, United States of Atlanta, Germania, etc.) all gave off a vibe that made this story much more realistic than most anime.

One thing that surprised me, after watching it again, was how much action was actually in this series. For some reason when I was watching it week to week, the series felt like it dragged in the middle (which was something left people feeling down about the series among other things). Watching it all in one go really gave a dire feel to the battles, which looked gruesome. I was surprised at how bloody this anime turned out to be. Even when Izetta joined the brawl she ended up killing a lot of enemy soldiers, putting a lot of blood on her hands. Despite how whimsical it may have looked when Izetta entered the fray, her lances caused a lot of mayhem. Her use of her rifle (which was also used as a broom to fly on) was incredibly badass (which made her a lot more deadly).

I was blown away at how well it was animated, especially when we reached the climax, when Germania cloned the original White Witch of Eylstadt’s legend and used Sofie to take down Izetta. The fights that these two were involved in were stunning and were easily the best parts of the series. Of course, every time Izetta got to use her witch powers to take down battalions it was amazing to see. It was crisp, smooth, and everything you’d want with anime fights. Sure, some might not like the fact of how powerful she is (making the battles one-sided). However, watching Germania try and take her down made the evolution of the battles turn into some compelling television. As the series continued on, it wasn’t just watching Izetta cause mayhem for Germania. Each battle she involved herself in became more and more difficult, making her wins and battle prowess much more rewarding to watch.

5 seconds into Izetta: The Last Witch and there's a corgi. I'M SOLD. pic.twitter.com/xasxEWrl4b

The best aspect for me was the musical score, which greatly enhanced the series.  Each song was the right one for that moment. There was some great dramatic music for the emotional moments, as well as scores that made each battle feel intense. Music can be such an important aspect when it comes to an anime as the OST of a series can hurt it just as much as help it. In this case, the music became such a huge strength that I think anyone would enjoy this series just for the music alone.

"Izetta: The Last Witch" is almost here, so let's chat about Hiroyuki Yoshino, the show's writer!

I enjoyed the story that Izetta the Last Witch was trying to tell. It’s told in a non-linear way (which can sometimes halt momentum or become annoying). Flashbacks were an important element to this series, including how Izetta and Fine became friends, what Izetta’s grandmother would tell her not to do with her powers, and the history involving Eylstadt and the White Witch. They are all important backstories, and despite all the flashbacks, it didn’t feel choppy. It seemed that each flashback was placed in an appropriate spot that didn’t take the momentum away from what we were watching unfold. And it gave a much clearer picture to the viewers.

And Izetta the Last Witch does a nice job becoming a story that mimics the sad, hard ending that fairytales follow. This seems rather obvious, considering the show’s title is “Izetta the LAST WITCH”. As much as I wanted a happy ending, things take a turn for the worst once we hit episode nine. Our main heroines deal with a lot of hardship and have difficult choices to make that could change their future. Not to mention that this is a story about war, and war isn’t pretty or happy. We see many characters you have come to enjoy meet a sad end. This makes Izetta the Last Witch the newest in a long line of sad fairytales. Plus, it certainly gave off the vibe of a tragic ending.

However, despite all the praise I give Izetta the Last Witch, there was easily something that I think kept it from being more popular. It’s something that many fans have heard over and over, and that would be the fanservice. So many times we’d be given interesting camera angles of female characters’ posteriors. And what made things more problematic was that it felt like the studio was trying their best to add it without it being blatant. But the fact that they kept doing it, made it all the more apparent. Examples of this included showing a bit of Izetta’s butt with a long shirt covering most of it (except at the very bottom). Or when Princess Fine is getting looked over by a doctor and we see enough to show the underside of her breast. It was little things that started to pile up in the series makes me wonder what was the point. And then there were flat out blatant scenes when we have Elvira groping both Izetta and Fine. There’s nothing anyone can say that would convince me those scenes were needed. Elvira was pivotal in making Izetta appear like the fearsome monster she was to Alestaff’s enemies. But seriously, her groping was annoying.

Also, during the middle parts of the series, we had a few too many “a day in the life” type of moments. Izetta the Last Witch has such a strong storytelling aspect going for it, that this was a disservice. I don’t think viewers need to see how much Princess Fine liked a certain kind of pie in her home country, and the adventures that ensued during that. The same could be said as we follow Izetta during her time as a guest in Eylstadt. It was fluff that wasn’t needed and hurt the show. The timing of it wasn’t great either, with the best example being when Rickert infiltrated Eylstadt. Most of it was important (he was building a rapport that would ultimately do him in). But there wasn’t a need to have a scene where he walks in while Bianca is bathing. It was added fluff (and fanservice) that wasn’t necessary.

The cast of Izetta the Last Witch was pretty strong. Mallorie Rodak did a “fine” job for Princess Fine especially with the polite speak and royal tone. In fact, during some of Fine’s more emotional moments (her father dying and worrying about Izetta), it came across as if it actually happened to Rodak herself. Rodak should be applauded for her work and I hope to see her portray more wide-ranging characters. Another standout was John Burgmeier, who made Berkman sound realistic and gave a chilling performance as a villain. I can’t give him enough praise. I also enjoyed Madeleine Morris (Bianca), Christopher Wehkamp (Seighart), Derick Snow (Rickert), and Jād Saxton (Sofie). However, Skyler McIntosh seemed a little stiff as Izetta. It wasn’t terrible, and for the most part she did a decent job, but there were times where Izetta came off more monotone than anything. When she was startled or in an intense battle, I thought McIntosh did a great job. It was the more subtle moments that felt a little off to me.

You can own Izetta: The Last Witch – The Complete Series – BD/DVD Combo ~ Check out this awesome clip from the dub thanks to our friends @Funimation 💜

FUNimation gave Izetta the Last Witch a mostly basic release, with almost no extras included, just trailers and promo videos. It came in a standard Blu-ray case with a cardboard slipcover, but nothing else was added. That leads me to believe that many gave up on this series and that there wasn’t as much interest as I’d hope.

Earlier I wrote about how I could see Izetta the Last Witch as a show that fits on Toonami and I still stand by that. Do I think it will attract a ton of new viewers to the block? That would be a no. But I do think the block could use the type of impressive female characters who really took charge in this series. Both Fine and Izetta were center stage taking risks to help save their country, and did so in a way that I think many people would enjoy. I worry about the amount of unnecessary fanservice that added to this series. It was a huge downer for me. But I think this series is one that should be checked out, because it has some amazing fights, wonderful music, and tells a story that was complete from start to finish.

Cons: Excessive fanservice; too much fluff in some episodes.