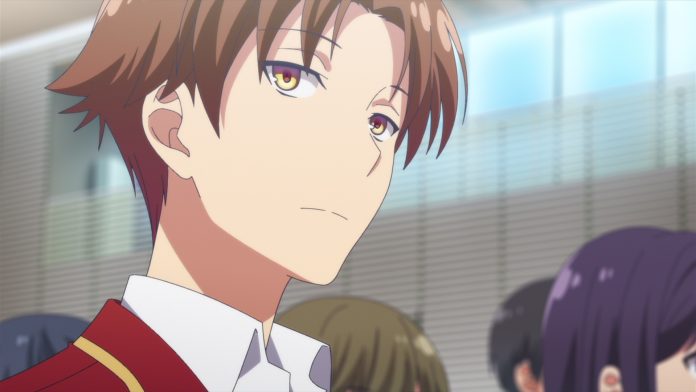 It’s not often that a show makes me think critically and cringe at the same time. Classroom of the Elite provides some interesting talking points as well as moments that plague anime. I was surprised at how well it was received by both fans and critics alike. It grabbed a ton of attention spawning many articles written about the project. But I wonder if this series tried to do more than it could, considering it was a single 12 episode season. So does Classroom of the Elite provide the elite entertainment that the name suggests?

A message from the great minds behind Classroom of the Elite​!! pic.twitter.com/R4kduc53UO

The series focuses on Kiyotaka Ayanokōji at the Tokyo Metropolitan Advanced Nurturing School. This academy is where the leaders of future generations are taught. We follow his exploits as he tries to advance to the vaunted A-class. At this school, students are ranked from A to D, with D-class being viewed as the runt of the litter (where Ayanokōji ends up). He befriends a girl who’d rather be a loner (Suzune Horikita), and they help each other out. After the first episode, we find out that this is no ordinary school. The curriculum is hidden from the students, and they are forced to come up with creative ways to survive the program. The more they succeed, the more points they achieve (which are used as currency at the academy), and those points can be used for anything. And I mean anything. So with D-class failing miserably after the first month, both Ayanokoji and Horikita strategize on what their next move will be.

A strength of Classroom of the Elite is how intelligent the central characters are. Ayanokōji, Horikita, and Kikyō Kushida all are masterful tacticians. Watching Ayanokōji isn’t the most exciting thing (more on that later), but I like that this series was a battle of the minds. Instead of using brute force to defeat an enemy, the entire series was a chess match, with Ayanokōji as the queen. He used his superior intellect to outsmart everyone and promote Horikita as the face of the rebellious D-class. Ayanokōji would use Horikita as the “king” to be able to do whatever it took it come out on top. Which made things fun to see how Ayanokōji would make it through every hurdle and challenge. It was an interesting ride that I think anime fans will enjoy.

FEATURE: Social Experiments and Psychological Thrills in Classroom of the Elite

Plus, I was surprised at how much Classroom of the Elite made me think when it came to equality and altruism, as both came up a lot. Having a series focus on these topics certainly feels like a recipe for failure. But I thought the series did a great job of storytelling, by letting the audience come to a conclusion about the issues that Classrom of the Elite raises itself. Sure, we hear Ayanokōji’s opening monologue about everyone not being created equal, painting a picture at how unfair life is despite what we might tell ourselves. But instead of having him ramble on about that subject, you see how that belief is played out. And throughout the series, the D-class tries to work together for the greater good (and to keep them from getting expelled), to show how even a gang of misfits understand that there’s strength in numbers (despite the significant personalities that were difficult to control). But watching everything unfold in the 12-episode series gave me an appreciation for what Ayanokōji had to work with to survive.

And while Classroom of the Elite chose to have a “peeping on the girls” mission, every other story arc felt compelling. A lot of issues that surfaced forced Ayanokōji or Horikita to think of a masterful strategy to turn the tables and put D-class ahead of everyone else. Being able to save Sugo in his “court case” to not get expelled was the most entertaining. And Ayanokōji buying a test point for Sugo from their homeroom teacher was a brilliant plan. While the setting was in a high school, you could easily apply the environment to the adult world, where bribery and lying come hand in hand. It was exciting to see what challenge the school would throw at our heroes next, and to see how they’d think of a way to come out on top was predictable, but satisfying.

honestly if you never watched Classroom of the Elite I don't know what to tell you pic.twitter.com/WmS3HHeAHe

What was difficult was that I couldn’t find myself invested in any of the characters. They are fun to watch since they aren’t all idiots. But I felt a disconnect in that everyone seems to be scheming in some way or another. Prior to episode three, I’m sure many would have looked at Kushida as the best character to support. Then she changed her personality (showing that everyone has something to hide) and threatened Ayanokōji with a false rape allegation to keep it hidden. Not only is it annoying that Classroom of the Elite would add a scenario that isn’t nearly as popular as some might think, (which was in poor taste), but the series felt like it was trying to go out of its way to make every character unlikable. The sudden turn was exhilarating, since we got a chance to see who Kushida really was, but would it kill this series to have at least one character to like? After we see Kushida’s personality turn, I found it hard to trust any other student who on the surface would look innocent. It got worse as soon as the series started to cultivate a battle of sexes when a young woman’s underwear was taken. It showed the worst of the characters and became difficult to enjoy.

Then we have Ayanokōji, who is a hard lead to get behind. I commend his style of staying on the sidelines and letting others take the credit (or heat). That’s something I can easily relate too. I would have changed the point of view to someone else. I’d prefer to watch Horikita and how she becomes the face of D-class, with some asides showing how Ayanokōji plotted everything out. It isn’t until the end of the series that we see more of Ayanokōji and how he might turn into the villain of the story during his last monologue. We could have seen the two face off (which would have been great). It had me excited, and to have the series end on that note completely killed the buzz. It gave another dimension to a character that was hiding everything, and teasing viewers at the end is too cruel.

For a show with such a pretentious attitude (the famous quotes that began every episode are an example), it had a lot of lowbrow fan service. To me, that presents a conflicting message. If you want an anime that forces its audience to think critically, I don’t believe that close-ups or slow-motion moments where the camera is centered around a girl’s chest or butt are the best. It’s almost as if Classroom of the Elite is afraid to stick with the intellectual crowd and simply added fanservice to sell Blu-rays.

The main thing I've learned from Classroom of the Elite is a lot of Deep Thinkers wrote the same shit I did during my emo high school years pic.twitter.com/MqzbREBFuk

As for the English dub, I found the cast very enjoyable to watch. Justin Briner’s uninspiring attitude, compared to his more notable roles, was great. I thought his voice was perfect for Ayanokōji and I was impressed with how he gave a character who seemed lifeless a pulse. Felicia Angelle does a fantastic job as Horikita and plays the tsundere character well. I’d been surprised if Angelle didn’t get the role due to how well she nails the archetype. I was even surprised by Sarah Wiedenheft when she had to show Kushida’s true face. Hopefully, she’ll get a chance to perform more roles like that. Overall there weren’t any weak links in this project, and a lot of actors nailed what each character represented or eventually became.

I, um… play Kiyotaka Ayanokoji in um… Classroom of the Elite… episode 1 is out, um, now, so… check it out whenever?

FUNimation didn’t add much in the form of extras for this series. Classroom of the Elite comes in a standard Blu-ray case with a cardboard slipcover. I was a tad disappointed and hoped for some added goodies for fans, but that isn’t the case.

Classroom of the Elite's "every episode gets a plot twist" is still fun for me, please keep giving me more of this nonsense.

I’m left feeling conflicted about Classroom of the Elite. The story is fascinating, and I wanted to know why Ayanokōji is the way he is. Plus, why his father wants him out of the school in the first place. Does he end up becoming the villain and take down his classmates who he has helped thus far? We will never know, because of where the anime left off (which was severely disappointing). But Classroom of the Elite does provoke some thought about society, and how humans work together, as well as their tendency to harbor ulterior motives. Maybe if there was less fanservice and more plot sprinkled in, I’d feel better about it. But the acting in this series is a huge win and could push those on the fence to pick it up for their own collection.

Pros: Interesting topics that made you critically think; loved the chess games both Ayanokōji and Horikita played; great cliff hangers making you want to watch more; the English cast did a great job.

Cons: Too much fan service that felt misplaced; a peeping episode; no truly likable characters; the battle of the sexes that bloomed in the last story arc; Ayanokōji not the best lead to follow; where the anime leaves off.