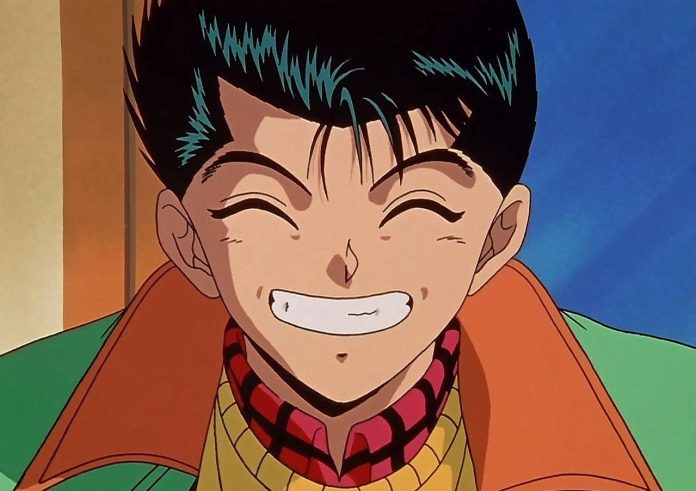 When you enjoy something, how hard do you go to bat for it? When I think of Toonami, I think of familiarity and nostalgia, two feelings that I believe closely influence just that. It was my formal introduction to animated shows I knew were visually, thematically, and narratively cut from a cloth that didn’t quite match what I knew to be cartoons. One of the first shows I ever experienced was Yu Yu Hakusho (YYH) when I was a preteen. I never finished the entire TV run until a couple of years later,  catching reruns on late nights and borrowing some DVDs from close friends. But the experience I had of actually watching it on the screen–whether I was with my brother, or the friend who owned the discs– shaped how I interact with anime to this day. Part of what made Toonami special to me while growing up, and even now, is that it’s something I can watch with other people. I won’t ever forget seeing scenes like Kurama absolutely wrecking this demon who uses paint without even undoing the magic restraints on his hands. I was glued to my couch until the moment of truth, and as soon as we saw the stakes flip, my friend and I both hopped to our feet, pointing and yelling, “He really did it!” while overcoming with sheer awe and adrenaline! About a month ago, I  began to rewatch the series, this time with some added life experience on my belt to see how well it’s aged.

This won’t be my first time rewatching the show–or even going through the entire story in general. Before I finished the YYH anime, I dove in to read the manga. I was familiar with Viz Media’s Shonen Jump magazine, and after getting some issues from Scholastic book fairs at school, I went to my local library and started reading there. Sitting down, poring over pages, and frantically peeling them back to get to the next scene, was a deeply personal and individualized experience for me, compared to when I watched TV in a room where anyone else could see what I was watching. Holding a book in my hand made it feel like I was the only one looking into this world–like this story was made for me. I was engaged in a completely different way! In the anime, Yusuke vs Chu was played up for drama, with intense music and the camera cuts building up tension and restlessness through a slugfest spanning 20-something minutes. In the manga, however, the fight itself was just as intense but only took a single chapter to conclude! The sheer economy of storytelling that you can achieve with comics rocked my mind! On top of that, knowing that Togashi Yoshihiro penned and drew this with just his editor and a few assistants made reading manga volumes come off like getting a private concert inside an author’s head. Anime has to be storyboarded, key-framed, in-between animated, and timed to music, voice actors, and cut and edited to fit a specific amount of time on a TV slot. This makes anime feel like a much greater, collaborative effort that is meant for mass appeal.

The fact that you can have audiovisual media displayed on a screen allows for the distinction to be drawn from books and how they are consumed. Because of how I specifically experienced YYH in those two ways, it made me broadly think of anime and manga almost as public and private media, respectively. You can talk about manga in public, but it’s nearly impossible to share in experiencing the act of reading a comic, specifically in a communal way. People also read at different speeds. Anime is created and has a set time that everyone who watches has to endure. There are plenty of people who gravitate to either media because of these inherent features, which could be perceived as flaws or strengths. Where I’m at now, I’ve reached a healthy level of respect and admiration for both forms, because of the craft that goes into them and how my different engagements with these stories helped enhance my enjoyment. There is an artistry to appreciate on both ends, and, let’s be real–artistry is the reason anime and manga fans are drawn to these mediums. There’s no such thing as a wrong or worse way to experience a story–they are merely options that appeal to different people.

Going back to YYH, I love and appreciate how comprehensive and well rounded the anime is. I can name off directors for storyboards, animation, and individual episodes, like Atsushi Wakabayashi, Kazunori Mizuno, and Noriyuki Abe. Still, my personal experience as an English speaker was enhanced thanks to the–let’s call it polarizing–English dub. Now that I’m older and I also know Japanese to some extent, I can’t help but cringe a tiny bit when I hear Japanese names like Urameshi (ooh-rRA-meh-SHE) not pronounced correctly (YOU-ruh-MEHsshi). But I can also appreciate a lot of the effort put into adapting the script to match conversational English AND accurately match lip flaps–no matter how awkward some deliveries are bound to get because of that. Justin Cook’s Yusuke and Chuck Huber’s Hiei were what my mind was effortlessly acting out as I read the manga, because that was how I first experienced them. Conversely, I was also able to appreciate how terse and brief manga chapters were compared to episodes of fighting that would be paced differently to suit a fixed TV episode format. Taking advantage of the medium to depict movement through a mix of illustrated and implied actions is only natural for an excellent comic.

There are always bound to be changes, additions, or excised content when adapting something. The anime had plenty of chapters spliced out to get to the meat of the story, only to gradually dilate the time spent on some other parts to avoid not catching up too fast to the original content. A lot of my enjoyment on a reread or rewatch of something comes from analyzing and trying to understand, as a creator, why decisions were made. It might have sucked that we didn’t get to see Yusuke help a sad ghost girl in the anime, but it meant the animator staff rotation was able to line up and give us a beautiful sequence of Keiko and Kuwabara saving Yusuke’s body from a fire. It might have been a narrative misstep to lower the stakes of the anime by making the “Forlorn Hope” not reduce Kurama and Yusuke’s lifespan for offering their lives (as the manga did). Still, it makes the next “life or death” decision that Yusuke makes feel less like a cop-out than a more standard procedure. Knowing that production committees might have influenced a choice, and get the original scene the author drew can make or break someone’s enjoyment. Maybe you, like me on a rewatch, thought the writing was weak and cheapened Yusuke’s resolve when he was rewarded with no consequences for making a tough decision. The good thing is that the source is always there, and in the manga, Yusuke suffers for the consequences of his actions vis-a-vis the Forlorn Hope and does not regret his decision.

When you get to read and watch something you love, one of the most satisfying things is piecing together what works. Sometimes it could be understanding why a character dynamic eventually leads a story into a crossroads, or that one particular event became unavoidable after one person decided to do this action. When you have the foresight of knowing how stories unfold, it makes looking for foreshadowing fun! It doesn’t have to be a Chekhov’s gun, but understanding a character’s personality better that you might not have connected with the first time could give you a lot of insight. I used to think Kuwabara was funny and goofy, but not anything special. His character arc shifts more seriously in the Chapter Black Saga, and while the anime was good, something about the manga when I read that part really clicked with me. I realized that Kuwabara’s entire character is about empathy. He is the delinquent with a heart of gold. The fact that he can connect with Seaman and his struggle is something unique to him among the central quartet of this series. Kuwabara is a character that gets more and more important as I got older because he represents a value that speaks to me. Yeah, I still laugh at the early episodes where Kuwabara dreams about kissing Yusuke to let his spirit get back to his body. Or audibly “b’aww” at Shuichi, the stray cat he’s threatened into doing bad stuff for in order to protect it from demons. The fact that Kuwabara gets manipulated often isn’t bad. The fact that his code of honor allows Kuwabara to become Yusuke’s first real friend is beyond special. Yusuke is an incredibly bitter character at the start of the series, and I genuinely believe that if not for him watching over and understanding the clumsy Kuwabara, overwhelmingly honest as he is, there would have been no way Yusuke would have matured into a truly heroic protagonist. I only understood that after reading Chapter Black, and it made me treasure the lighthearted moments at the start of the series that much more.

It’s truly a beautiful thing when you can pinpoint what makes you enjoy something. Without my willingness to reread or rewatch content that I already checked out before, I probably wouldn’t be as sure or coherent when it comes to explaining why I feel the way I do towards my favorites. I know that there are plenty of people who are more willing to spend their time going after new things to experience, and that isn’t bad at all! What makes media fun is the fact that we choose how we engage with it. Some of us prefer reading. Others would rather watch. The fact that we have options is the one thing I’m most grateful for as a fan. Do you have a show you’ve seen that you just had to read the manga as soon as the anime ended? Or something you’ve read the source for that made you look forward to seeing it adapted into anime? I’m an omnivore, and I love to see people jump into the side of animanga that they’re not used to experiencing. Let us know if you have a series you’ve read and watched and felt like you got more out of it for doing so!

Marion is a guest contributor to Toonamifaithful.com. Feel free to follow Marion on Twitter @microwaevy You can also check them collecting podcast infinity stones, or writing for WSS Talkback and their personal blog. Check them out here!