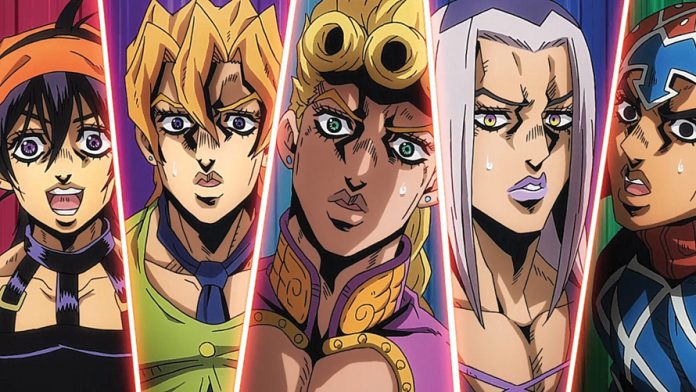 There will be spoilers in this article about JoJo’s Bizarre Adventure: Golden Wind. Paragraphs that contain spoilers will be marked. You have been warned.

There’s no getting around it, JoJo’s Bizarre Adventure is, well, Bizarre. It’s right there in the title, so what one sees is what one gets. It’s part of the series’ charm, seeing just how bizarre things get for the heroes and how they get out of one situation after another with their stands until the ultimate showdown with the villain. No matter what part of JoJo is your favorite, it’s a time tested formula for good reason –it just works. (Perhaps this will clue you into what part I’m talking about through meme osmosis alone.) It’s because JoJo takes its odd—no, bizarreness seriously that makes it so enjoyable. However, there is a trade-off for this, especially with Araki’s very “forward momentum” style of writing that arguably formed Jump (along with his contemporaries Hara and Toriyama) back in the ’80s and permeates the magazine even today. Sometimes one has to stretch their willing suspension of disbelief to astronomical proportions to enjoy the story, and like limbo, there’s only so low one can go. And unfortunately, I have not enjoyed the most recent series airing on Toonami “Golden Wind” part of JoJo –known affectionately to aficionados as “Part Five”.

I’ll let your shock and horror subside a bit before continuing.

This isn’t to say I find no merit in enjoying this story arc in JoJo. Quite the contrary. The side characters are interesting and even fan favorite Polnareff comes back to shine toward the end. And the callbacks to Stardust Crusaders and other JoJo lore in general are not only compelling but set up the stage for Part Six magnificently. My thoughts come from the manga version since I have not yet checked out the anime due to the aforementioned distaste for this part. Surprisingly, I do have the Blu-ray release on pre order because I’m a completionist and couldn’t bear to have a shelf that has parts one through four.  and then nebulously skips to six (which we know will happen, it’s a case of when more so than if). So I’ll be watching the anime adaptation eventually, which I have heard is the animation highlight of JoJo adaptations. Though I can say, I have experience with this part due to reading the manga in Japanese and then English.

So how about Golden Wind? The backdrop is Italy –a place Araki has noted to be a big fan of, so it makes sense he’d want to base a part of his manga there. In fairness, the manga does use the locale rather well. The arc starts in Naples and concludes in Rome, and Araki is very good at including little factoids about the region to serve as a focal point to the events and perhaps even teach a bit about Italy. Narratively this story arc borrows a lot from Part Three: Stardust Crusaders rather than Part Four: Diamond is Unbreakable in that aspect. But this is where some of the issues begin for Golden Wind. Although Diamond is Unbreakable lost a bit in its stakes because it based itself in a central location, this in turn, allowed the characters more room to grow since the story was less of a “one and done” type deal. By returning to this format, we’re granted more agency, but the trade-off is again a set of fights with interesting characters who essentially fall by the wayside when the heroes defeat them.

I don’t want to spend too much time comparing Part Four (which is my favorite story arc) with Part Five, but there was something more satisfying to seeing the villains pop back up on the heroes’ side than be a pin bowled over as the story progresses. The conflicts felt like they were speed bumps for Giorno and friends, instead of creating challenging moments leaving an impact.

HEAVY SPOILERS IN THIS SECTION: YOU HAVE BEEN WARNED

There’s also the issue of the story momentum itself. A significant part of the plot is pursuing “the boss,” which ultimately doesn’t go anywhere. It’s, in essence, a wild romp around Italy, which would be fine if this were the centerpiece of the series, but it isn’t. We’re supposed to believe that the boss’ orders and then upon the betrayal finding the boss is the most important thing. The characters believe it, so they’re not the problem, but because it ends up becoming somewhat immaterial to the story itself –since the boss himself is y’know, following them. The detours in this journey end up swallowing up what could have been a fascinating story. It puts the protagonist Giorno in what I like to call the “Jo-bro” slump. To define this –it’s when the supporting cast of JoJo ends up being more interesting than the protagonist, which admittedly is an affliction that Josuke falls victim to in his story. This in and of itself isn’t a bad thing since the few parts of Part Five I do enjoy are the side characters (Mista is perhaps my favorite “Jo-bro” out of all the parts), so Giorno being passive and thus a “sleeping slave” to the ebbs and flows of the story isn’t great but isn’t the worst thing. The others –Bruno, Narancia, Trish, and Mista more than make up for where Giorno falls flat. However,my biggest issue with the part comes from it’s villain: Diavolo.

HEAVY SPOILERS IN THIS PARAGRAPH: YOU HAVE BEEN WARNED

To me, a story’s most entertaining when there’s an antagonistic element, and JoJo is no different. I’d go as far as saying that JoJo, due to its narrative structure, relies more on the antagonists in a story arc than other stories of the same ilk. DIO, Kira, and Pucchi being among the most famous  villains, and maybe the most popular characters of their respective Parts. Toonami Faithful’s Editor-in-Chief would even go so far as to say that JoJo villains are some of the most popular characters in all of anime.The point being, these antagonists are memorable and leave a lasting impact on those who watch. Diavolo however, doesn’t live up to them because he lacks complexity, and some of Araki’s decisions in his character arc make no sense. For example, the lack of explanation of why Diavolo and Doppio are considered the same person really hurts my overall enjoyment. Instead of a nice explanation as to why, viewers just have to accept this as fact. Moreover, in that regard, even if Araki did feel like having an entire split personality wasn’t important enough to explain, a major flaw is that Doppio’s a slave to Diavolo’s whims, which isn’t  compelling. Yes, I can understand his desire for secrecy, but that flies in the face of him having a daughter in the first place. One could extrapolate that perhaps he had a different goal in mind as a youth, but therein lies the problem –we’re never given a sense of moral complexity to Diavolo that would validate such a choice. He is just a villain who suddenly wants to erase everything he had ever done without much of a reason. Even with his sharing Doppio’s thoughts, there could have been a tug-of-war between the parts of himself that could have given Diavolo a level of complexity that would inform his actions, that there is a part of him that does have some morality. While there are cases (even in JoJo) where villains are just bad guys for the fun of it, most of the notable examples are ones who have more of a moral core to them that they either refuse to bend or is so warped that any goodness is nothing more than a shadow of what it once was. Diavolo however, is just a bad guy. Nothing more. As the main antagonist of a JoJo story arc, he falls short of having enough tact to carry an entire part, especially when it is a plot-based story (which Golden Wind is). The plot is finding and then defeating the boss, so having a villain who can live up to that buildup isn’t just important but essential.

Golden Wind has a lot going for itself –new locale, fun side cast, and from what I hear the anime adaptation is one of the best-animated parts (which  excites me). But having to slog through the long journey for an ultimately disappointing conclusion isn’t something I’m looking forward to watching. Luckily Araki’s game does step up for Part Six, and beyond so perhaps this one part could be just written off as an unfortunate miss. Let me be clear though –one should not skip this part for obvious reasons, and that there are genuinely amazing character moments for the heroes.  While the finale itself is a little bit lackluster, the aftermath  lives up to its gangster reputation. I’d be able to recommend this part more if Diavolo weren’t a major part of it, but sadly that’s just how it goes. Ah, though I couldn’t possibly conclude this without listing what is perhaps the most glaring omission of them all –we finally go to Italy in a JoJo story, and we don’t see a single Zeppeli. C’mon Araki, what gives?!

Sakaki is an editorial contributor for Toonamifaithful.com and an Editor-in-Chief at Weekly Shounen Sunday Edition. You can find more Shounen Sunday News and features on Wsstalkback on Twitter.

Want to hear more about this subject? Check out these two interviews Toonami Faithful conducted with Kellen Goff and Kira Buckland!