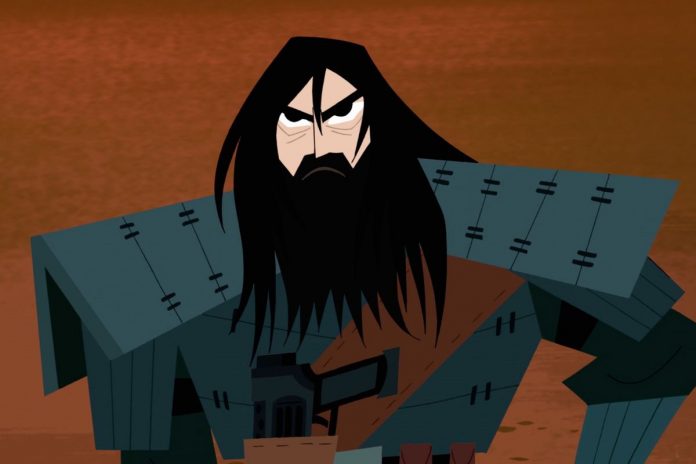 Samurai Jack creator Genndy Tartakovsky has re-emerged on the scene of Adult Swim with a frenetic new action series, Primal. The most striking element of the series is not the vivid animation, dramatic action sequences, or desperate primordial settings, but rather that each 22-minute episode has no dialogue whatsoever.

The use of dialogue-free animation is not new to Tartakovsky. It has been seen in programs on Adult Swim and the Toonami Block. The eponymous Samurai Jack went through several episodes without uttering a single sentence. This intriguing artistic style forces the character’s actions and expressions to fill the space where dialogue would be. Often the lack of any character discourse is itself a part of the setting of the animation; in the case of Primal, Spear – the primitive caveman and Fang – the Tyrannosaurus Rex are unable to communicate with each other verbally due to their very nature. Their non-verbal disposition forces them to find alternative ways to convey their thoughts and wishes through their interactions with each other and the environment around them. The wordless communication is so integral to the show itself; the viewer almost forgets by the end that no dialogue was ever spoken.

Silent animation was one of the earliest forms of mainstream animation, dating back to the 1900s. The earliest example of hand-drawn animation was the French animated film by Emile Cohl called Fantasmagorie. It consisted of a one-dimensional stick man encountering various morphing objects. At the time, sound technology had not developed enough to have any audible accompaniment, so it was likely shown to audiences silent, or with a small orchestra playing music in the background.

Winsor McCay, a pioneer in animation, later created “Gertie the Dinosaur” – one of the earliest animated characters to have distinct personality traits. Through a series of clever vaudeville performances, he interacted with the hand-drawn creation on stage by cracking a prop whip to demonstrate the only “captive” dinosaur or feeding her cardboard apples. The black-and-white image of Gertie seemingly reacted to him and in place of her dialogue, McCay filled in the sound for his creation.

Possibly the best-known character from the earliest period of silent animation is Felix the Cat, created by Pat Sullivan and Otto Messmer. In place of dialogue, screens of story text would appear between animated sequences. Felix became an iconic character in the early 1920s and was wildly popular with audiences until Walt Disney committed himself to create a fully synchronized cartoon with a soundtrack. Disney’s determination led to “Steamboat Willie,” the screen debut of Mickey Mouse. After this, sound synchronization became mainstream with animation. Though throughout the years,’ wordless communication was standard in animated shorts and cartoons, dialogue became a staple component of animated characters.

Samurai Jack was not the only Toonami show to go entire episodes with the characters not speaking. Various programs played on the block have had episodes without characters conversing, including Star Wars: The Clone Wars, The Powerpuff Girls, and Dexter’s Laboratory. The narration and emotion of the characters are accomplished by overdone gesticulations, punctuated music and sound effects, and conundrums. Another example, the original Lupin the III manga series featured a chapter entirely without dialogue until the last page, reminiscent of classic Tom and Jerry comical style of cartoon. In a series sequel, the author used it to convey a more serious, darker tone and context, demonstrative of the range in which “silent” animation can be used.

What once was a necessary component of standard animation has today become a stylistic choice for animators wishing to convey an alternative message. Sound effects, music, and imagery play a vital role in filling the gap where character dialogue would be, though the animation itself becomes a compelling element to a show. For Primal, the vastness and loneliness of the surrounding primordial environment, coupled with the desperation of the central characters Spear and Fang as they battle increasingly hostile forces, captivates the audience throughout the episodes. It isn’t only the action sequences that make Primal a fascinating exploration into no-dialogue animation, but also the intense facial expressions, bodily movements and strain of muscle, and even the more quiet, leisurely scenes that take place in the series. With all of these elements, pathos, humor, suspense, and compassion are conveyed in Tartakovsky’s creation, as it was throughout Samurai Jack. It makes one hope that animation continues to be inspired by the possibilities offered by no-dialogue animation.