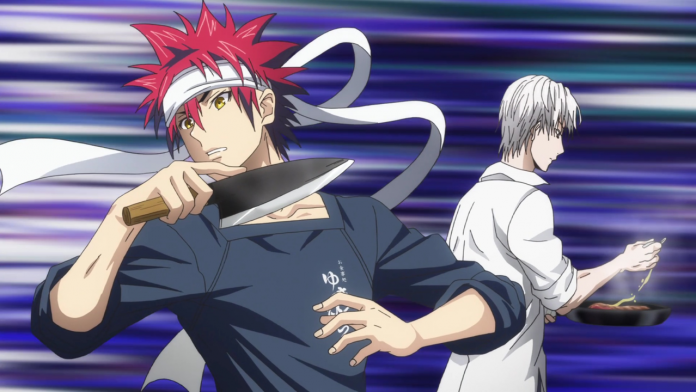 I was introduced to Toonami by a news report talking about “super violent” cartoons that aired on Cartoon Network and pictured was my childhood favorite show Thundercats. I laughed at the idea of Thundercats being too violent; then it hit me that the show I idolized was on television. Back in 1997, internet streaming and even DVD series sets weren’t what they are now. Easily paving the way for me to be the Toonami fan I am today. Still, the notion that Toonami was showing things that were ‘too violent for kids’ was always laughable to me, especially since it aired censored anime. Today Toonami plays airs plenty of series that could be classified as hyper-violent. We have seen the likes of Hellsing Ultimate, Black Lagoon, and Deadman Wonderland air on the block (not that there’s anything wrong with these series). However, the block has acquired two new shows that could be the perfect counter to that age-old concern.

While containing adult themes and some action, Dr. Stone and Food Wars will engage its audience by forcing fans to learn while they are being entertained. As the old Disney adage goes: a spoonful of sugar helps the medicine go down. Food Wars, while providing us ample fanservice and character drama, is also teaching us real cooking techniques and recipes that we can use in our everyday lives. Being able to learn some important lessons in cooking should always be welcomed, but get excited – because Dr. Stone gives fans lessons in actual science! While it may not be the best idea to replicate what is done specifically in the series, Dr. Stone is chock full of real science that’s important to know.

Many indeed thrill at Senku’s adventures (which could be viewed as the main draw in Dr. Stone), I find the scientific explanation for his schemes to be fascinating. The science being legitimate helps us understand the world around us better. It’s like having Bill Nye the Science Guy mashed into a shōnen adventure (what a combo on Toonami). Have you ever wondered how mortar is created? Senku will teach you that it’s made with Calcium carbonate (which you can get by smashing seashells together into a powder) and sand mixed and then cooked. The result is a primitive type of cement. I can’t think of a case where I’d actually need to know this, but since Dr. Stone taught it to me, I find myself more attached to this piece of information. Which is what I can see happen for a lot of fans as they view this series. They’ll begin to absorb the knowledge that could help them down the line. I found the prospect of learning new things fascinating and I began to think about all the possible topics that Dr. Stone can teach viewers! The most impressive example comes in the eleventh episode. Suika has a visual impairment that is mitigated by her helmet using the Pinhole effect. It’s an interesting phenomenon that helps focus vision, something we in modern times use in a type of lensless camera. Dr. Stone’s information may be more for self-edification and less for practical uses, we humans do tend to retain information learned while having fun better than we do when reading dry textbooks. These are just a few of the lessons in science Toonami viewers will get. While some could affect our lives, none can have the immediate impact that Food Wars can provide. After all, people have to eat.

The lesson in Food Wars that sticks out in my mind is Soma’s use of honey to fix an over-salted meat dish. Oddly enough, I couldn’t believe that would salvage the meat. Intrigued by this prospect, I ran what Soma did by a friend of mine who is a chef, and to my shock, this is a valid way to save some meat. I now know if I accidentally knock salt onto a meat dish, some honey will help rescue my meal! After all, meat can be pricey, and I do not want to ruin a dish that is an expensive commodity. This is just one of the many cooking techniques shown that can help viewers even if we aren’t copying down the exact recipes used. The fact that the methods are directly given to us is also a boon. That chef friend of mine recently started watching Food Wars with me, and since doing so, we have been trying to take inspiration from the show’s recipes in our own cooking. But it isn’t just about the cooking with Food Wars, as the series can teach fans much more.

Towards the end of the Training Camp arc, Soma struggles to get the needed attention for his puffed egg dishes before they deflate. It created a huge amount of drama for viewers, as this might have been the challenge that sent Soma back home. He ultimately uses the flair of his cooking to draw in a crowd much like what you would see from street performers. While most of us won’t need to sell our cooking ability, seeing how to sell a product by showing off one’s skill in creating is undoubtedly a great life lesson. Many shōnen action shows make a point of perseverance through adversity, but Food Wars goes one step beyond that. Getting to watch creative thinking alongside determination can be truly invaluable when dealing with a difficult situation. Beyond showing one’s skill, adding determination teaches using critical and creative thinking can help find a solution to any issue. Problem-solving skills are one of the best things to have, and Food Wars is showcasing that.

Toonami is making you smarter in scientific understanding around the world, cooking techniques, and thinking critically. I find all of these to be important lessons in life. Of course, this doesn’t make any of the other shows have less value. I would be a lot sadder without the character-driven opus that is Demon Slayer, the uplifting drama of My Hero Academia, or the hilarious hijinx of Lupin III. We have such a strong lineup of shows right now that it’s easy to love all of them. But the fact that two of them are actively making us smarter? Now that’s both a good defense against doubters and an uplifting feeling knowing that Toonami is enhancing its viewers with amazing life lessons.