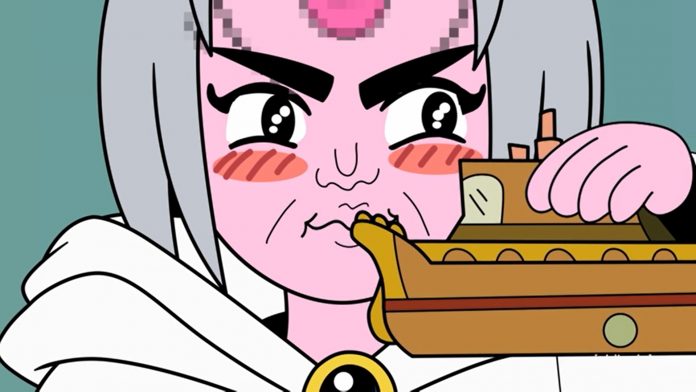 From anime and Batman to The Powerpuff Girls and Ben 10, Toonami has been the place to find action cartoons and discover new forms of entertainment for nearly two decades. There’s always been a little bit of something for everyone. Some titles on the block seem like no-brainers, and others leave viewers scratching their heads. Gēmusetto: Death Beat(s) is one of the latter.

Death Beat(s) is a continuation of Makasu’s journey from the first season, Gēmusetto Machu Picchu. After being burned alive in his tennis match against the Incan sun god Inti, Makasu awakens in the afterlife. However, in defeating multiple gods in sports matches, he caused numerous afterlives to converge. Now Makasu must journey to the Center of All Death to stop the convergence from collapsing the universe. Along the way, he learns about empathy and friendship from his handy (get it?) companion Dr. Legs and musical battle robot amphibian Keith, though often applying what he learned in haphazard and self-serving ways. Death Beat(s) also emphasizes music, which is expressed in short clips explaining musical styles or instruments and battles between different music styles. With frenetic storytelling and jokes ranging from laugh-out-loud funny to painfully cringey, Death Beat(s) resembles Pop Team Epic’s aesthetic and has a similar sense of humor to the likes of Thomas Ridgewell’s “asdfmovie.”

Everything about Death Beat(s) run on Toonami was unusual. Firstly, it aired without at least a marathon of the previous season to bring viewers up to speed. Maxime Simonet created the first season Gēmusetto Machu Picchu in 2019, which premiered on Adult Swim that same year as part of its April Fool’s prank. Additionally, the first episode of Death Beat(s) originally premiered during Adult Swim’s April Fool’s joke in 2020. While not the first Adult Swim original series to air on Toonami, it’s an interesting programming choice to run a show’s second season when viewers weren’t as likely to have seen the first one. Death Beat(s) joining the block was also delayed until November 2020 instead of the initial September premiere date revealed by Simonet during a live-stream earlier in the year. On Dec. 2, Toonami announced on their official Facebook page that Death Beat(s) final four episodes would air on the same night on Dec. 19, only to be replaced by the HBO Max Wonder Woman marathon at the last minute. The remaining episodes aired on Dec. 20 on Adult Swim, and then inexplicably reran on Toonami in January until the show’s conclusion.

Series that air toward the later-half of Toonami tend not to trend much because of lower activity at that time, and Death Beat(s) was not an exception. Fans of the first season expressed their love of the show online. And yet, Death Beat(s) consistently elicited responses from detractors, at least as seen from the Toonami Faithful social media pages.

The most common complaint from fans on social media about Death Beat(s) airing on Toonami is that, unlike the other shows airing with it, it’s not an anime. While not an unfounded complaint, it is an interesting one because Death Beat(s) draws inspiration from and parodies anime, just like it did in its first season. For example, when Makasu becomes the new ruler of the Chinese mythological Hell, Diyu, he is pictured sitting on a stone throne with a red cape, and a joke ensues about him developing an addiction to acetaminophen. This imagery is clearly based on the 1988 animated film Akira, when Tetsuo (also wearing red) sits upon a stone throne in Neo-Tokyo’s Olympic stadium, having sought out drugs to maintain control of his powers. Bendy Rivers’ voice actor Benjamin Rivera dons a May Queen Nyan-Nyan uniform from Steins;Gate in the opening sequence for episodes 11 and 12, which is reminiscent of anime openings from the 80s and 90s. Finding strength through the power of friendship is easily the most common storytelling trope in anime, and it also applies to Makasu on his journey (even if he tends to use it in self-serving ways). In summary, Death Beat(s) does fit within Toonami’s history of titles that have aired on the block, despite seeming to stick out like a sore thumb.

If you had asked me in November if I would recommend Gēmusetto: Death Beat(s), my answer would likely have been “no.” I didn’t watch the first season before Death Beat(s) aired, nor did I have a desire to do so. Adult Swim’s original programming usually doesn’t line up with my tastes, so I maintained low expectations. Despite my reservations about the show, I was surprised to discover that I had become invested in Makasu’s journey to the Center of All Death. The acting in Death Beat(s) is on point from start to finish. The character designs are equal parts goofy and charming, and the backgrounds are beautifully illustrated. When the final episodes were rescheduled because of the Wonder Woman movie marathon, I was disappointed because I was looking forward to what would happen next for Makasu and his friends, even though I didn’t like Death Beat(s) very much up to that point.

Despite having no prior context for his relationship with Makasu from Machu Picchu, I found the Bendy Rivers arc to be the strongest storytelling in Death Beat(s). Rivers’ absurd resolve to follow Makasu to the end is endearing and hilarious, and the moments when they reconcile their rivalry to work together as friends is surprisingly touching. So, I recommend giving this show a chance. Death Beat(s) is very different from my usual preferences, but maybe that isn’t such a bad thing. Sometimes you need to experience something different to know whether or not you’re going to like it. You may surprise yourself if you do.

Lastly, and most importantly, Tytti is Best Captain.