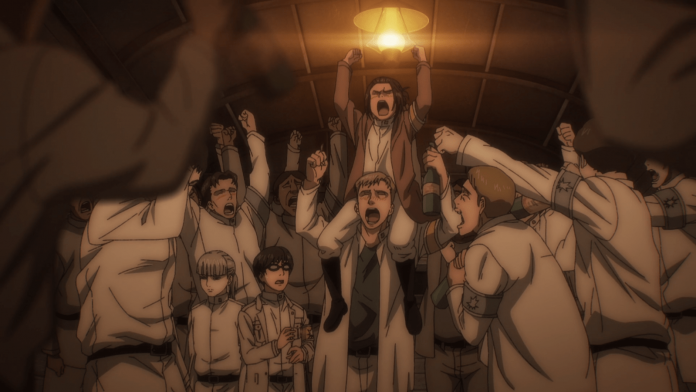 Episode one wrapped up a climactic battle that ended a four-year war between Marley and the Mid-Eastern Allied Forces, giving fans a spectacular bang to bring in the new season. But what are the ramifications of Marley’s victory? Episode two’s opening scene shows a general pondering this after reading a newspaper praising the Mid-Eastern Allied Force’s ability to pierce the Armored Titan’s armor. The general also mentions the fleet at sea, which almost defeated Marley, making some believe that the titans’ power might not be as absolute as they thought. Commander Magath joins the general and admits that the world has been developing weapons while Marley has been solely relying only on the titans. Later on, Zeke asks permission to speak and suggests the Paradis Island Operation should be looked into to retrieve the Founding Titan and wants to use his last year as the Beast Titan to redeem himself. Zeke continues to say that he wants to end what his father set in motion on the island, which is the first time he has acknowledged his father by name (Grisha Jaegar), which adds a beautiful flow of tension that viewers are probably salivating over. As many fans remember, Zeke was why Grisha ended up at Paradis that spurred the whole story of Attack on Titan. It feels as if Zeke and the Jaegar family will have their fated meeting, and I cannot wait to see it unfold!

Commander Magath later reveals that none of the survey ships sent to Paradis Island have returned as he interrupts Zeke and Colt’s conversation, leading some to wonder if going to Paradis is a viable option at this point. Zeke believes that more than one titan is responsible for ships not returning and informs Magath that titans are not the only threats to worry about for Marley’s future.

Reiner wakes up in a panic from his nap as he reminisces of his time with Mikasa hitting him with a thunder spear from the previous season (who wouldn’t dream of Mikasa, right?). Galliard (the Jaw Titan) was sitting at a table near him and took issue with Reiner. Galliard proclaims that if he were the Armored Titan, the war wouldn’t have happened, and his brother Marco would still be alive. You can understand Gallaird’s animosity toward Reiner for his brother’s death because Marco was eaten by Ymir while protecting Reiner. Galliard sees Reiner as someone who doesn’t deserve the honor of controlling the immense power he’s received. Pieck (the Cart Titan), who hasn’t been in human form for over two months (I would not like to be in titan form for that long), appeared to tell Reiner that Gabi and the other kids are worried about him, so Reiner goes to the children to assure everyone that he’s fine.

Falco would then pull Reiner aside to express his interest in becoming the Armored Titan because he wants to protect Gabi from the toll becoming a titan can be (the whole dying after 13 years issue). Reiner and Falco seem to care about Gabi and would much rather live a full life instead of being doomed to die young. This is an interesting moment we don’t often see in Attack on Titan where becoming a titan can be prevented instead of a form of punishment or used as a weapon.

Once the Eldians return to their hometown of Liberio, Zeke leads an unofficial meeting with Reiner, Colt, Galliard, and Pieck. Zeke informs them that the influential Tybur family will inform other nations of the threat Paradis Island poses to the world. I would hazard a guess that thanks to efforts of Eren finding the knowledge Grisha left behind created uneasiness amongst their ranks. For security measures, the Tybur family owns the War Hammer Titan who has never been used in war (which I find fascinating to find out). It is known worldwide as sending King Fritz to the island where Eren and company have been stranded all their lives. I wonder how the Tybur family factor into what our heroes on Paradis are plotting. There are many questions to which Reiner continues that trend, wondering if he will once again return to where this story began.

This episode was not action-packed, but we see the war’s aftermath that Marley wonders if their military strategy might need to change. Reiner also seems to have changed from his time on Paradis, and I wonder if he’s emotionally ready to face his former comrades again. Making Marley the focus in this part was much appreciated, especially giving fans more information after that brief introduction from last season. And it’s startling at how topical these first two episodes have been with current events from this current month and the previous year. It’s always something I enjoy in anime that can make it more relatable, and Attack on Titan has done that well (which can be good or bad depending on what you see). There have been some less than favorable moments depicted in Attack on Titan that become all too real for Jewish people (for example). And seeing how dangerous a military-run country can be; and how ignorance can be bliss when looking at the world view of others (more so the characters in this series) is very startling. Nevertheless, due to the Founding Titan’s importance, I want to see if Marley can be successful this time or if Eren will remain in possession of the most powerful titan. And then ruin everyone else’s plans.

The English dub cast continues to do a fantastic job voicing these characters. This cast doesn’t miss when it comes to bringing out the necessary emotions in this series. Lindsay Seidel’s performance as Gabi stands out to me because she brings the spirit of Gabi’s character to life that is satisfying as a manga reader. I appreciate and admire the dedication to entertaining fans from the safety of their homes.