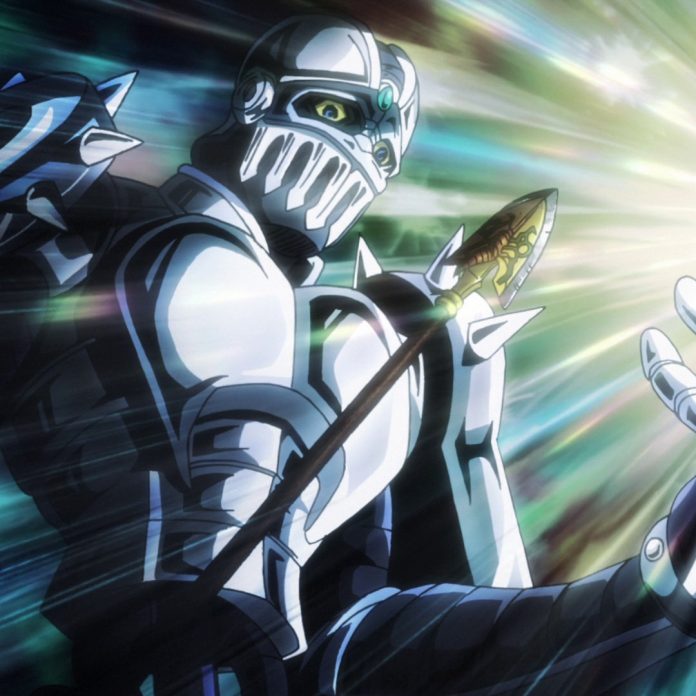 “Please, spare me the moment to explain I acted this way only because Diavolo afforded me no other choice. Right now, the event that you are experiencing as you stand there gawking was brought about by the very arrow I had hoped to give you. I still hope to convey the secret of its power, even as I desperately fight to hang onto my soul.”

Among some of the night’s highlights, JoJo’s Bizarre Adventure saw Polnareff use Silver Chariot to activate the stand arrow as a last-ditch effort to stop Diavolo. However, this would trigger an event in which the entire cast would switch bodies with one another. Assassination Classroom introduces Irina Jelavić as Class 3-E’s newest instructor. While she has trouble getting along with the students, she also tries her hardest to kill Koro-sensei, at least until she finds out the hard way that conventional weapons are useless against him. And Black Clover has Mereoleona dragging the Black Bulls back into the Yultim volcanoes for another training mission with the Crimson Lion Kings.

For this week’s social media buzz, #Toonami would trend in the United States on Twitter alongside JoJo’s Bizarre Adventure, Assassination Classroom, Black Clover, Fire Force, and Naruto Shippuden. #Toonami would also trend on Tumblr. The full list, including statistics and tweet counts from the Twitter app, can be seen below.

This week’s feature was a game review of Ghost of Tsushima for the PlayStation 4. It received a score of 9.5 out of 10.

On Saturday, Oct. 10, at midnight, Adult Swim will be airing a special performance from the hip-hop duo Run the Jewels. Branded as “Holy Calamavote,” band members El-P and Killer Mike will be performing songs from their latest album RTJ4 as part of the effort to encourage people to vote in the November election. To make room, Toonami will start at 1:00 a.m. EST for that night, with the entire schedule pushed back an hour.

Celebrate your right to vote with @runjewels first performance of #RTJ4 on Adult Swim, Saturday, October 10 at 12a.

While fans continue to wait for the announcement of Sword Art Online’s return to Toonami, those who have been watching the simulcasts got some news regarding what is next for the franchise. Following the finale of Project Alicization in Japan, Aniplex has announced that the Sword Art Online: Progressive light novels will be adapted into an animated series. Progressive will be a retelling of the Aincrad arc from the ground-up, covering parts of Kirito and Asuna’s journey in the floating castle of Aincrad. Progressive plans to include events that were skipped over in the original story. Further details, including a premiere date haven’t been mentioned as of this writing.

InuYasha fans are gearing up for the premiere of the franchise’s highly anticipated sequel, Yashahime: Princess Half-Demon, next month. Viz Media announced that the show will begin broadcast on Oct. 3, and will be available for simulcast on Crunchyroll, FunimationNow, and Hulu. Viz also mentioned that the English dub “would follow shortly after.” Whether that means fans will get a SimulDub or if they will have to wait sometime after the anime finishes in Japan is still unknown.

Finally fans have a definitive date as to when the fourth and final season of Attack on Titan is scheduled to premiere: Dec. 7 of this year. As with previous seasons, the simulcast will be available stateside on FunimationNow and Crunchyroll. Regarding the English Dub, Funimation noted that information “will come at a later date.”

Special thanks to @Kisuru, @sdurso5, and others I forgot to mention for spotting some of the trends on this list.