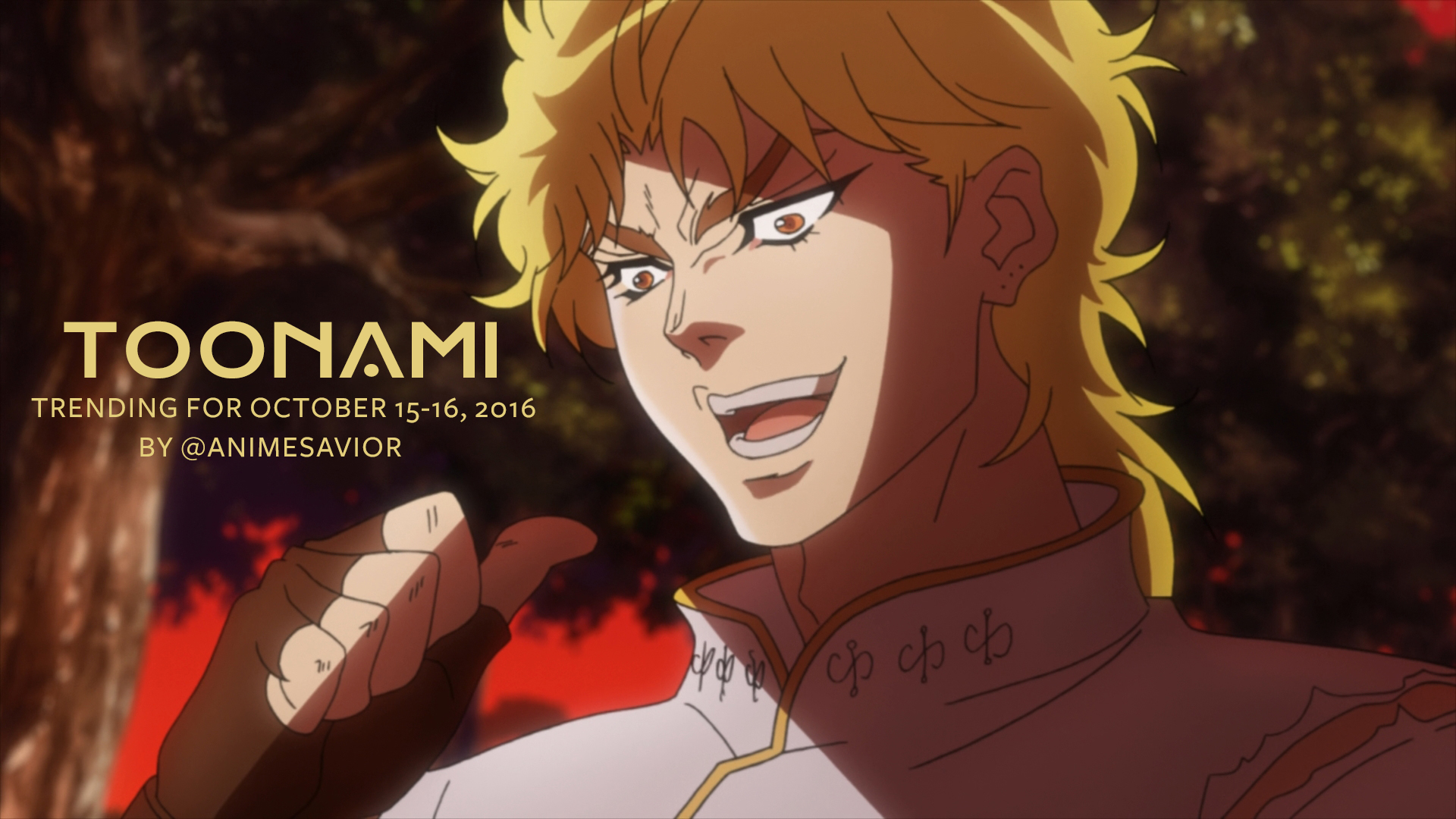 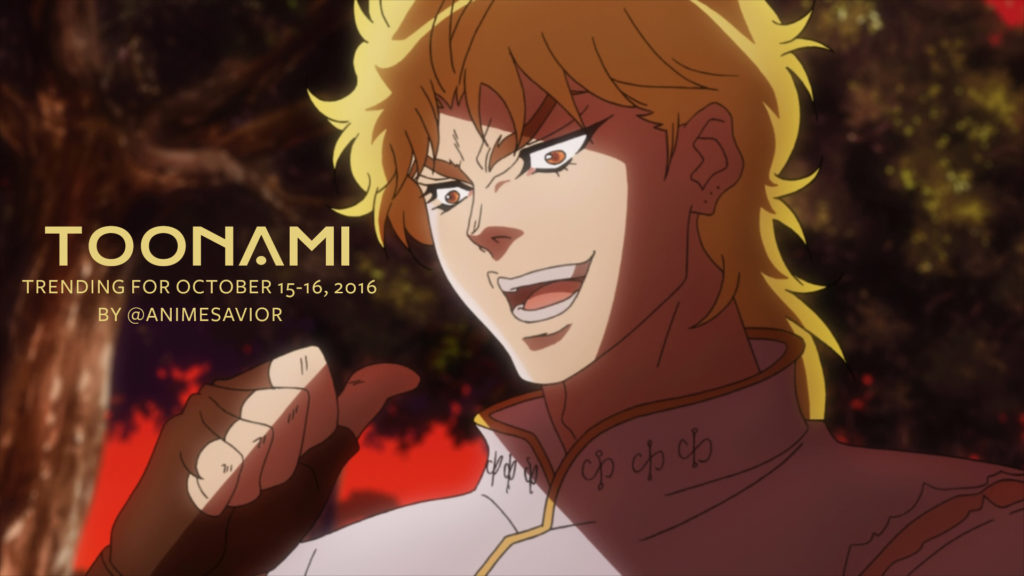 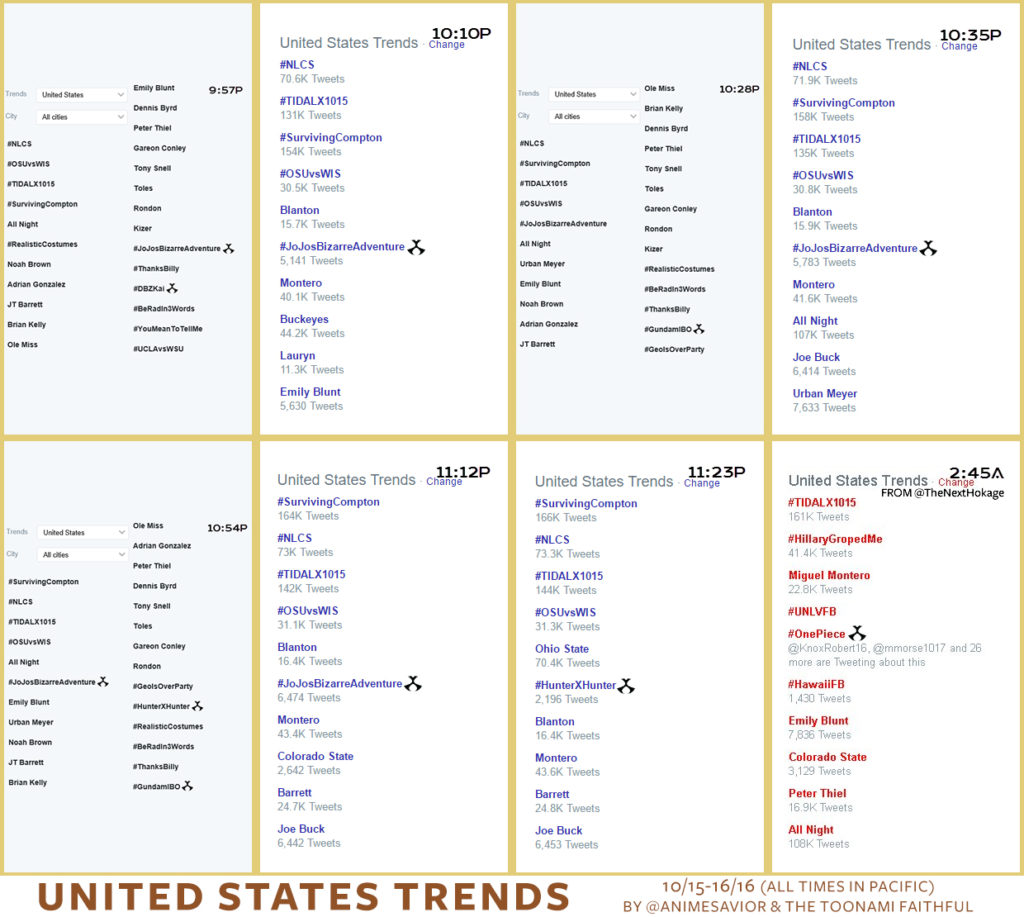 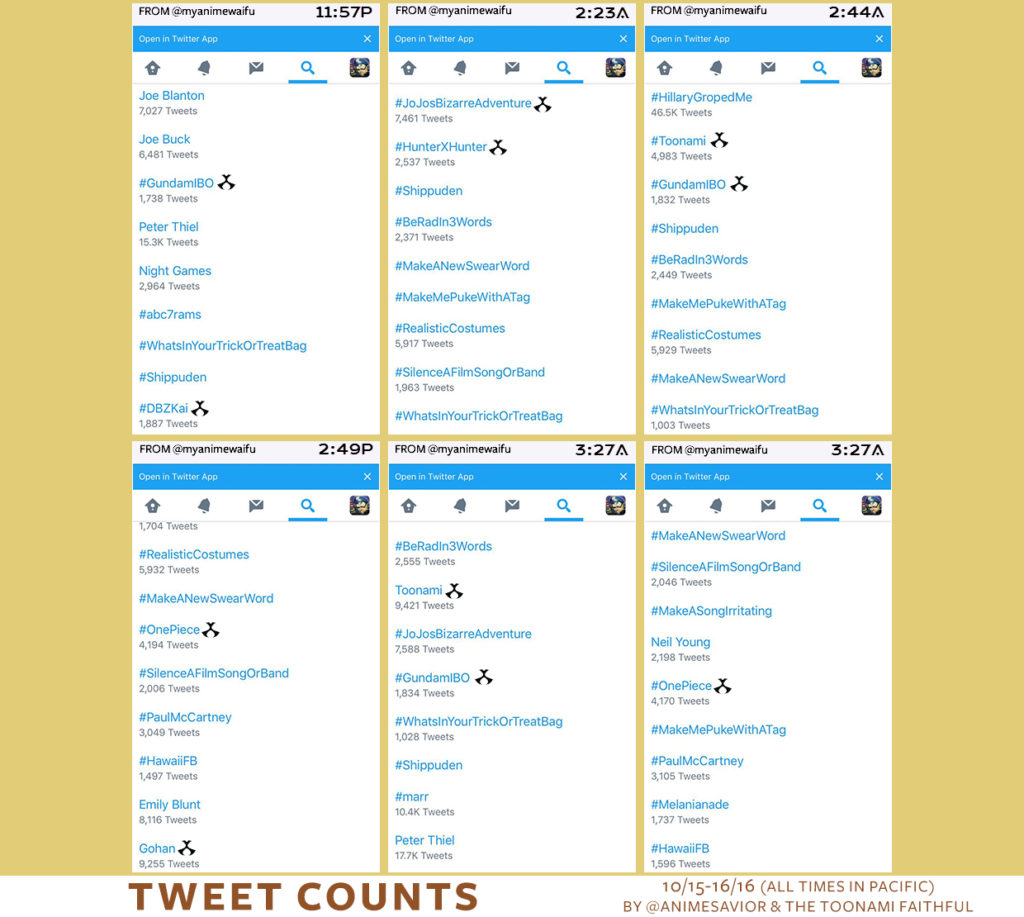 “Tell me [Erina], have you and JoJo kissed yet? I’ll take that as a no. You thought your first kiss would be JoJo, but it was I, Dio!”

“With Dio’s sudden arrival, JoJo’s carefree life spiraled into one of misery.”

The Toonami Trending Rundown for October 15-16, 2016. After several long years of waiting, the Joestar family finally makes their debut on the better cartoon show as JoJo’s Bizarre Adventure joins in on the action. And Jojo fans would make their voices heard as the hashtag #JoJosBizarreAdventure trended not just in the US on Twitter, but also on Tumblr and on Facebook as well. The rest of the block would also well, as every show save for Shippuden and One Punch Man also trended in the US, while Toonami also trended on Facebook. DBZ Kai would produce a character trend in Gohan as Goku forfeits his match with Cell for now as he lets Gohan have his turn in attempting to take down Cell.

We had a couple goodies from this week. The first was a promo for Intruder III, which is set to premiere on November 5th and will have a 4 week run through the entire month.

Toonami also showed a music video “You’re Not Alone” focusing on the topic of friendship. You can check it out below.

Also on November 5, during the extra hour provided by the ending of Daylight Savings, right after the regular scheduled airing of One Piece, Toonami will be showcasing a special presentation of the Makoto Shinkai film Children Who Chase Lost Voices.

This will be the first time since the 2014 month of movies that a feature film will be presented on Toonami, as unfortunately the prospect of airing movies has been put on an indefinite hiatus due to high acquisition costs and a lack of budget nowadays to air them, especially as movies are only aired once or twice. That being said, we’ve seen time and again that nothing really is impossible for the better cartoon show, and this was granted an exception. Of course, while having another month of movies is unrealistic at this time, if you do wish for Toonami to consider showcasing a movie every now and then, I highly recommended you check this one out, or at least set your DVRs.

While Jojo’s was a highly requested show for Toonami ever since today’s version of the anime began in 2012, due to acquisition issues, long story short, the Joestars were never able to make their debut on the better cartoon show until now. JoJo’s arrival into Toonami may be a good example of the old saying that good things come to those who wait, and its road to Toonami could give hope for fans of Sailor Moon, Fairy Tail, Tokyo Ghoul, Mob Psycho 100, as well as fans and other shows who have been waiting for their shows to make it to the better cartoon show eventually. All I can really say is that if you really want to see a show make it on Toonami, keep supporting the block and the industry overall, let Toonami and the distributor know you want a show there, and be patient. Nothing is impossible and if there’s a significant demand for a show, anything can happen.

This season of JoJos is 26 episodes long, but as fans who watched the subs or read the manga would know, there’s a lot more to tell in the story of the Joestars, with Stardust Crusaders up next to bat, followed by Diamond is Unbreakable, which is presently airing in Japan. While I’m sure JoJo fans will give all the support they can to make it happen, if you do like the show and want to see the sequels and beyond happen, keep watching. As Jason DeMarco would say, television is a democracy and people vote with their eyeballs and if the ratings and overall buzz are good, we’ll get to enjoy this great show here for years to come. If not, there are plenty of other shows out there that would love to have Jojo’s spot, as those who don’t want more long runners will be quick to point out. The future really is in your hands.

Special thanks to @myanimewaifu, @TheNextHokage and others I forgot to mention for spotting some of the trends on this list. 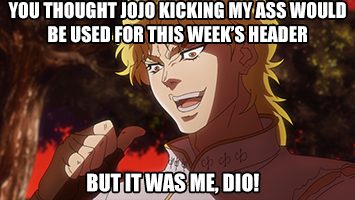 Let’s Go. All of Us. Together. Only Toonami on [adult swim] on Cartoon Network.