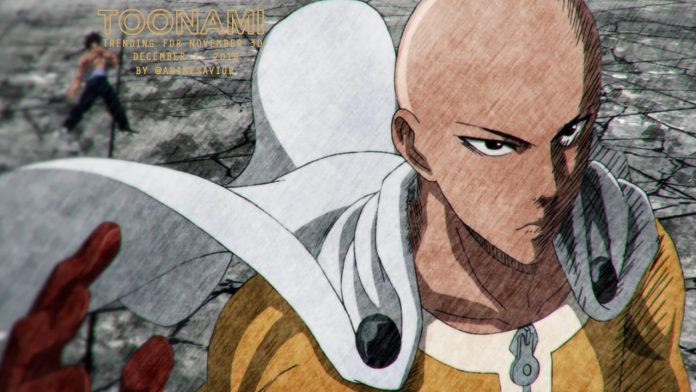 “[Who am I]? Just a hero. I heard you calling out for help, Suriyu. You fought hard on your own. Let me take care of the rest.”

The Toonami Trending Rundown for Nov. 30 – Dec 1., 2019. It’s the beginning of the holiday season with Thanksgiving, so Toonami took most of the night off to air a Food Wars marathon. However, the first hour still showcased new episodes of My Hero Academia and One-Punch Man on their regular scheduled times, as well as The Forge with its fourth episode.

Among the highlights of the night, Deku runs into Overhaul in My Hero Academia, who is having a bit of a family dispute with Eri. Despite the desolate appearance she had, Deku is forced to let them go for now as there is little evidence to warrant an arrest and separate Eri from Overhaul. Deku also learns that All Might may not have much time left in this world due to his chronic injuries as Sir Nighteye’s foresight quirk predicts. Meanwhile, in One-Punch Man, Suriyu wins the martial arts tournament, but his celebration is short-lived as monsters try to force all of the entrants to join their side or die. Suriyu was among those that refused and was beaten to a pulp until Saitama arrived.

On Twitter, Toonami would trend in the United States alongside The Forge, One-Punch Man and Food Wars. Meanwhile, on Tumblr, Toonami would trend along with #BNHA. The full list, including statistics and tweet counts from the Twitter app and Amr Rahmy’s Fan Screening analytics app, can be seen below.

This week’s feature was the fourth part of The Forge. For those who couldn’t make it due to Thanksgiving weekend, you’ll want to check it out as it plays a significant role in TOM and SARA’s storyline. You can check it out below.

Tune in next week for the fifth part of The Forge, the finale of Lupin the Third Part V, and the first of the last two regular scheduled Toonami nights of the year. Until next week, stay gold as always.

Toonami Tweets of the Night for November 30-December 1, 2019