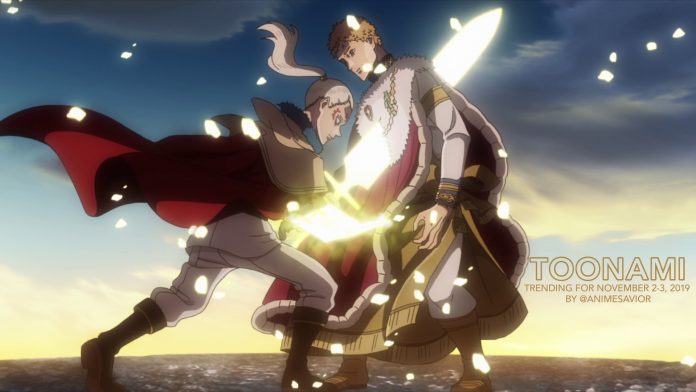 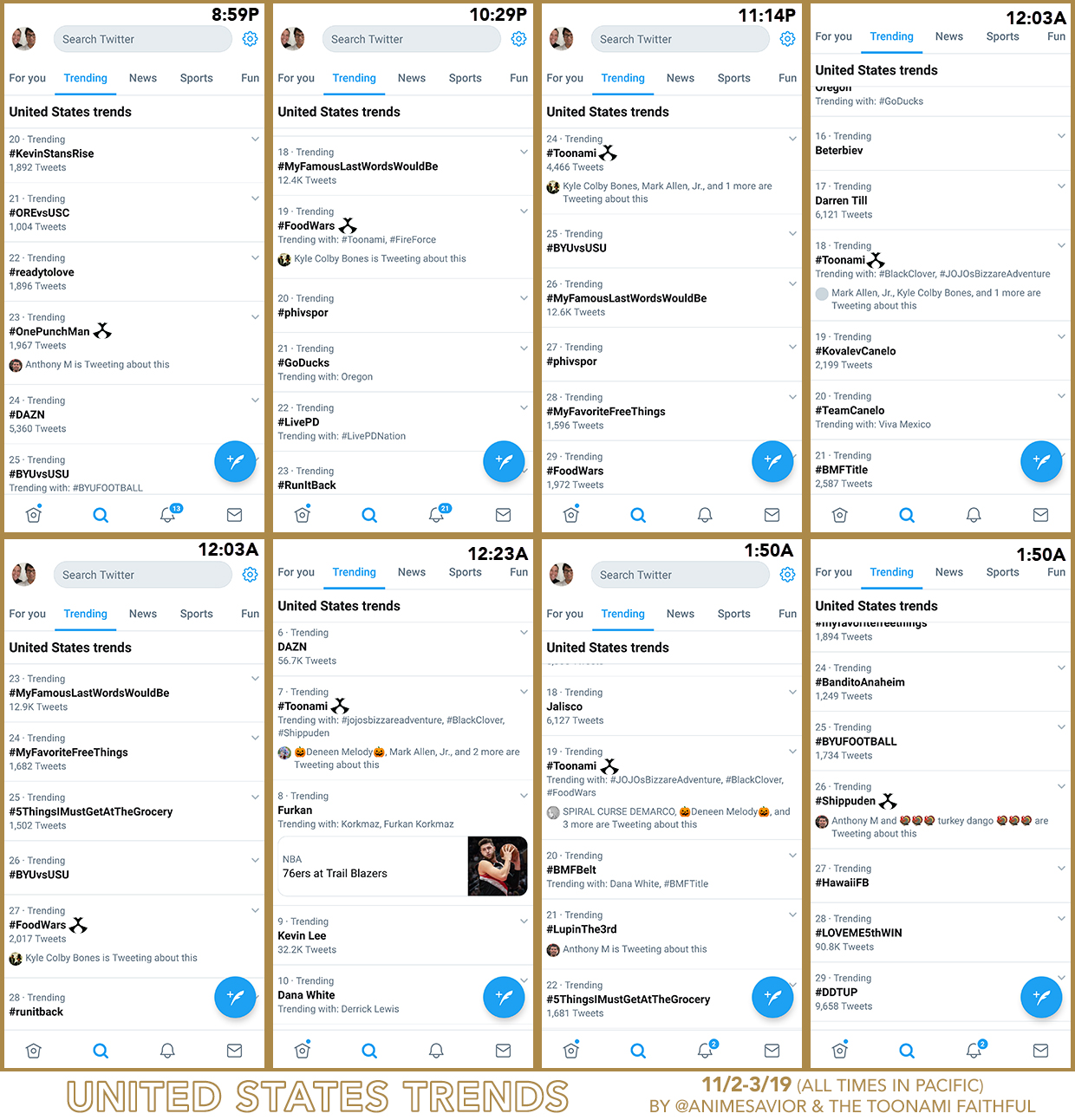 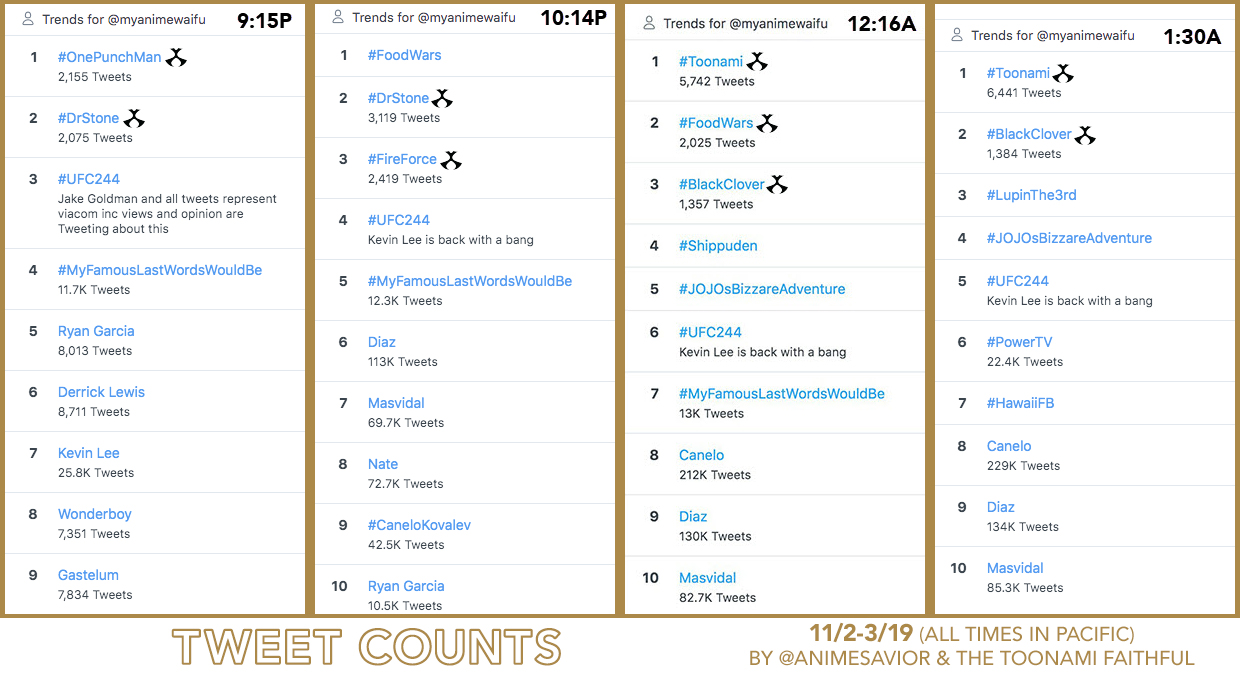 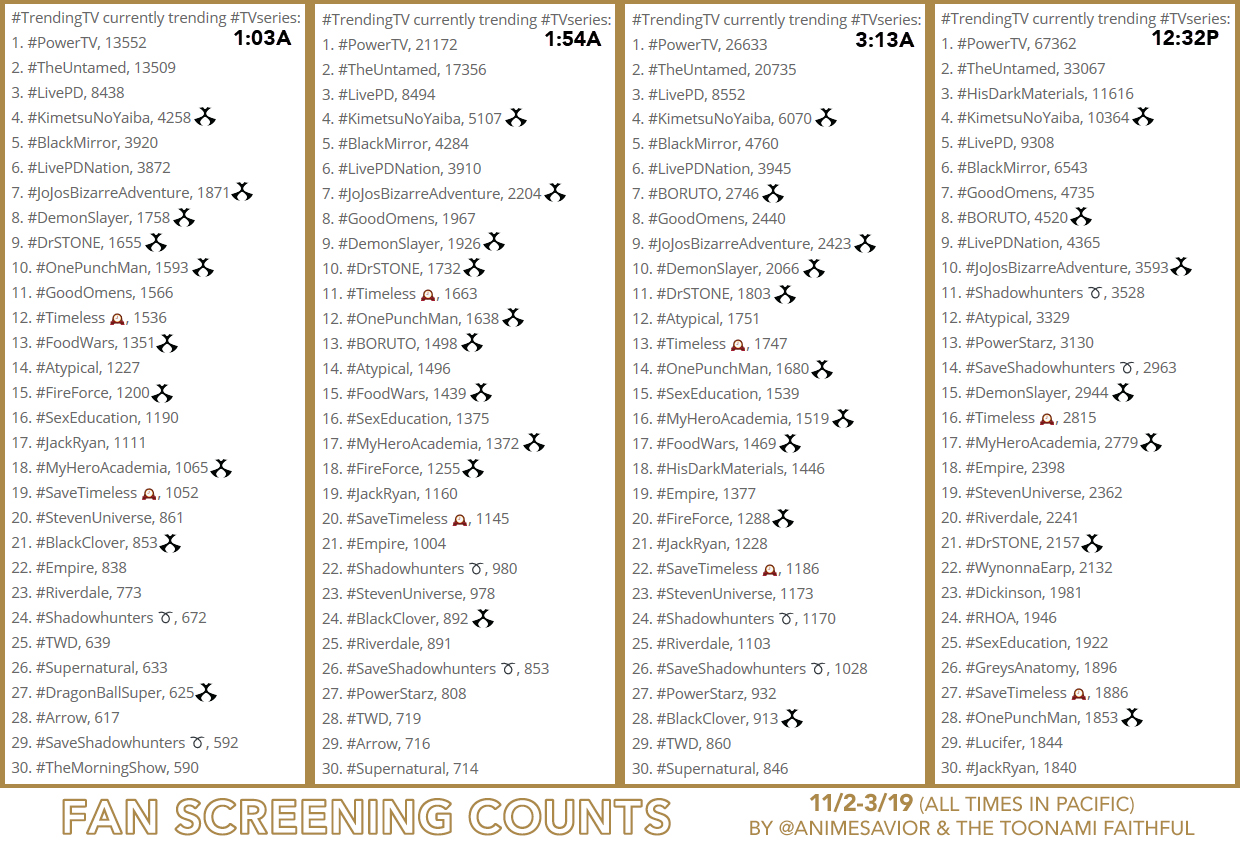 “Zara had carried out his duty as a magic knight and I wanted to follow in his footsteps. I was finally sure that my purpose in life to become the kind of night he was. How could [his death] possibly be right? And it wasn’t just among the magic knights either, it was the way the country had always been. The class system made the nobles prideful and the commoners hopeless. There had to be more on both sides of the coin. Magic potential, human potential is infinite. But to be heard I needed power, standing, and trust. I devoted my efforts to producing results and became the Wizard King. Surely magic and people should be more free. It hasn’t happened overnight, but I can see now that little by little this kingdom and its people are finally beginning to change. After all the ones I came to trust and respect combined their strength, as well as the strength of those who trusted us. As the Wizard King, I can’t let it end here. I refuse to.”

The Toonami Trending Rundown for Nov. 2-3, 2019. As JoJo’s Bizarre Adventure settles back into the block, it’s the calm before the storm as The Forge and My Hero Academia’s fourth season arrives on the block.

Among many of the great moments witnessed on the night, in Dr. Stone, Senku attempts to forge some glass as part of his plan to make Gin some cola, creating lenses for Suika to fix her nearsightedness and getting the local blacksmith to help them out. Meanwhile, in Black Clover, Julius battles Licht as the latter vows revenge on what the Magic Kingdom did to his people. While Julius manages to fend off devastating attacks on the populous, it wasn’t enough to defend himself against a potentially fatal blow from Licht. And in JoJo’s Bizarre Adventure, Giorno fends of Bruno as he was sent to get revenge on Leaky Eyed Luna, but spares him due to the kind-heartedness within Bruno, before recruiting him in his quest to reform Naples’ mafia for the better of the people.

In terms of social media buzz for the week, #Toonami would trend on Twitter along with seven out of the 11 show’s hashtags. #Toonami also trended on Tumblr. The full list, including statistics and tweet counts from the Twitter app and Amr Rahmy’s Fan Screening analytics app, can be seen below.

This week’s feature is a game review of the Untitled Goose Game by developers House House and Panic, which has become an internet sensation since its release back on Sep. 20. It received an 8 out of 10 score.

Tune in tomorrow night at 11:00 p.m. Eastern for the first episode of The Forge alongside the premiere of My Hero Academia’s fourth season, among other great moments. Until next week, congratulations to the Washington Nationals for winning the World Series and stay gold as always.

The Goose is Loose. Only Toonami on [adult swim] on Cartoon Network.