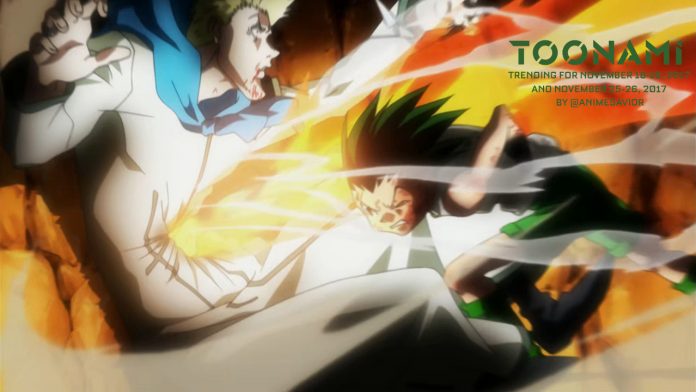 “But it’s not our place to judge [their actions]. We don’t think it’s right to let them die just because we hate them. Both sides risked their lives in battle, and both are prepared to kill if necessary. But when the fight’s over, we’ll those rules cease to apply.“

This week’s Toonami Trending Rundown is a double-feature for the nights of November 18-19 and 25-26, 2017. A big two weeks for the better cartoon show as the second half of Countdown would be showcased while Beerus collects the Super Dragon Balls and summons Super Shenron, Gon fighting off Genthru from killing him for his cards, and Gene has a score to settle with the McDougal Brothers, among other great moments.

For November 18th’s Toonami on Twitter, every show save for Shippuden, Bebop, and GITS would successfully trend in some capacity in the US during the East Coast airing. Meanwhile both Toonami and Dragon Ball Super would also trend on tumblr.

And finally, Dragon Ball Super continues strong as the buzz would help the show once again make it on Nielsen Social’s top 5 most talked about shows on the day, reaching the #4 spot with a combined 34,000 total interactions between users on Twitter and Facebook. This is the 27th time for Super and 41th time a Toonami show overall has made onto Nielsen’s daily list since we started recording this feat.

The following week’s Toonami took place during Thanksgiving weekend, so this year Toonami has opted to take the week off regular scheduling to show episodes 131-140 of DBZ Kai, but not before showcasing the finale of Countdown. In terms of trending, both Toonami and #DBZKai trended in the US and Toonami trending on tumblr, ending a drought of the last two marathon nights of a show not trending.

Of course, for the past two weeks, Toonami showcased both parts 3 and 4 of Countdown, which you can see below. As previously mentioned, this will be the last Total Immersion Event until at least mid-2019 as the Toonami crew wants to have more time to create the next one.

Unlike previous Total Immersion Events in the modern era, the post-Countdown look wont entail any major new changes to the block’s look aside from a battle-scarred TOM and a few new additions to the Vindication. This is because according to Jason DeMarco, the TOM 5 look still remains popular among viewers and the Toonami crew to keep it awhile, though there are plans to have a revamp sometime next year.

We are sticking with the current one for now since we really like it and it seems to be a favorite of viewers. We’ll switch out in 2018 at some pinky.

We will however see some new changes programming wise going into next week, but before we get to the big news, here are some notable Toonami-related news of note going around within the anime community: If you haven’t heard, some big news for the block last Friday as announced on Toonami’s Facebook. Next week, Toonami will be receiving another expansion beginning next week on December 2 to begin at 10:30pm EST, with both Dragon Ball Super and DBZ Kai moving up the schedule by 30 minutes. In addition, the prime-time presentation of Super at 8:30 will be ending, as the premiere will now be airing 2 hours later. This is all in due part to Toonami bringing in its newest acquisition: the broadcast dub of Black Clover, which will premiere on 11:30pm.

Based on the increasingly popular Shonen Jump manga series by Yūki Tabata, which as of this writing has 13 volumes published, the series has been adapted into an anime by Studio Pierrot and began premiering in Japan on October 3, 2017. The series is expected to be 51 episodes in length, barring any future sequels.

The story’s synopsis is as follows: (source: FUNmation):

“Asta and Yuno are two orphans who want the same thing: to become the Wizard King. Locked in a friendly rivalry, they work hard towards their goal. While Yuno excels at magic, Asta has a problem uncommon in this world: he has no powers! But, on the day they receive their grimoires, they surprise everyone. To reach their goal, they’ll each find their own path to greatness—with or without magic.”

Black Clover is one of the FUNimation licensed animes released this season that is receiving a “Broadcast/Simul-Dub”, dubs that are released immediately or not long after the Japanese broadcast, joining Space Dandy, Dimension W, and Attack on Titan season 2 as one of the few Toonami shows in the modern era that are receiving this special fast-track dub to American shores.

Among our main characters, Dallas Reid will take on the role of Asta, while Yuno will be voiced by Micah Solusod, best known among Toonami fans for previously voicing Soul Eater Evans. The full list for the first few episodes has been published by FUNimation, which you can see here.

Time will tell whether Black Clover will be the next big shonen anime series or not, and what it brings to the better cartoon show, but according to Jason DeMarco on his ask.fm page, future plans for Toonami are in place extending to at least 2021. With many new works and sequels potentially on the horizon, these are exciting times to be a Toonami fan, and as long as it has the ratings support from both anime fans and general viewers, the support of Adult Swim, Cartoon Network, and Turner Broadcasting, and the maintaining of partnerships with Funimation, Viz, Aniplex, Sentai, Production IG, Toei, Sunrise, Discotek, and the anime industry in general, I think this train will keep on going for many more years to come.

Besides Black Clover’s debut and the expansion to 10:30pm EST, tune in next week as TOM and SARA are back on the helm as Hunter x Hunter showcases the finale of the Greed Island arc. So until then, stay golden as always.