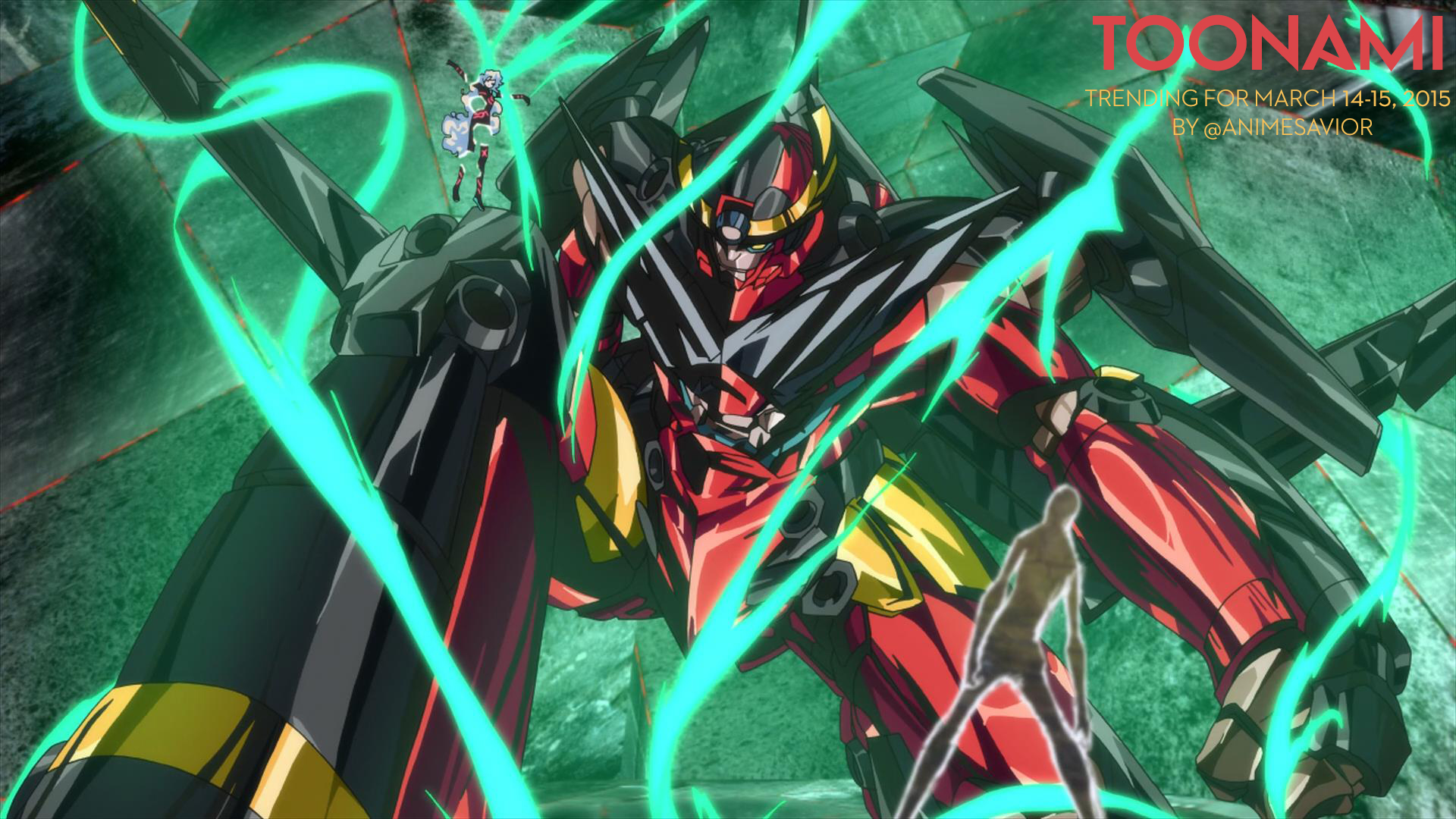 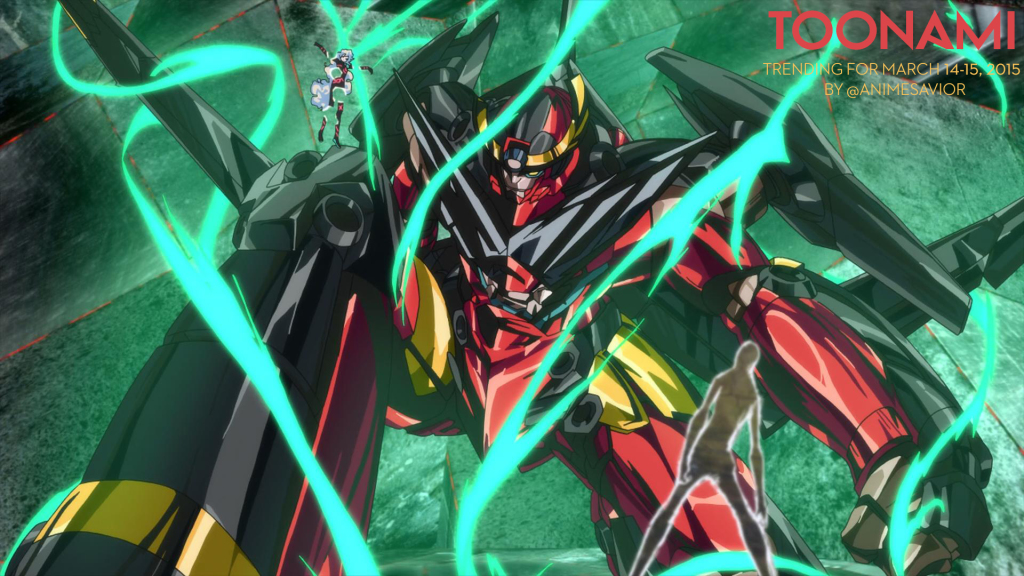 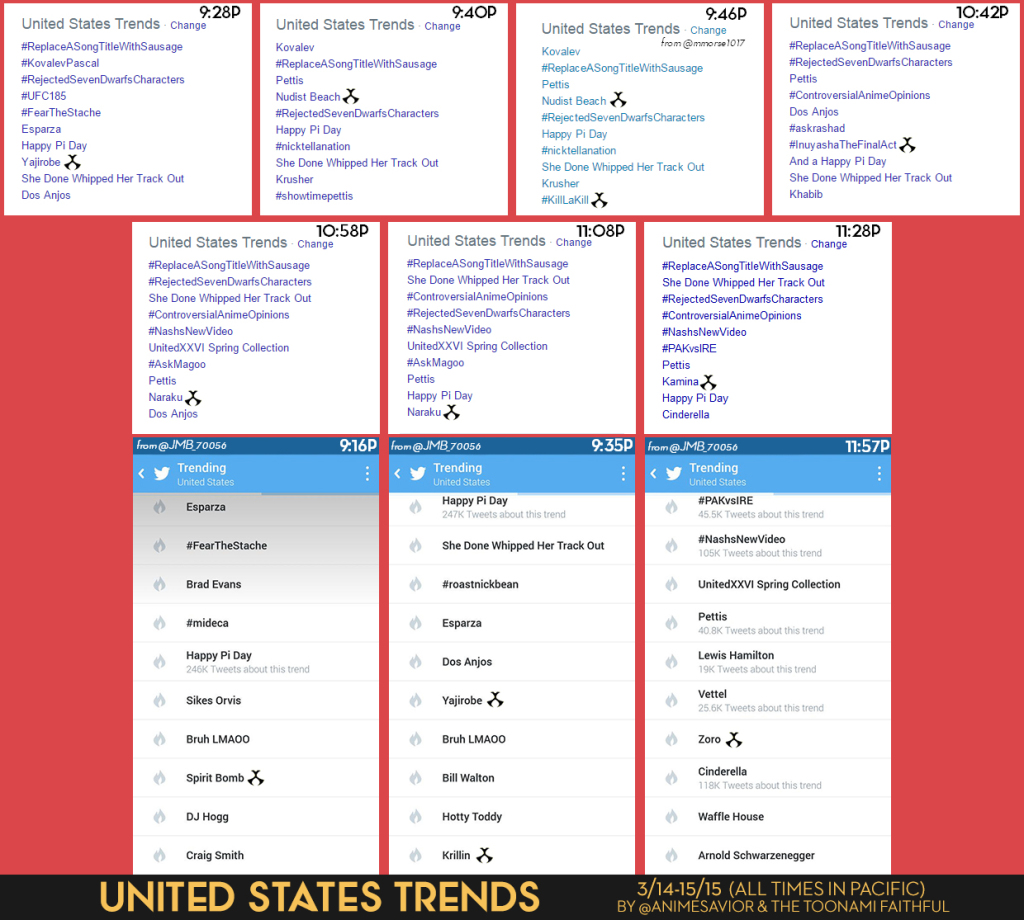 “Get going, Simon. Just don’t be distracted by the what-ifs, should’ves and if-onlys. The one thing you choose yourself, that is the truth of your universe. […] Don’t forget, my universe is the universe that is in [your heart].”

The Toonami Trending Rundown for March 14-15, 2015. As the day of Pi comes and goes, Toonami had itself a pretty good week in terms of social media buzz. In terms of shows, #KilllaKill and #InuYashaTheFinalAct both managed to trend in the US.

In terms of character and in-show content trends, every show save for Deadman managed to produce at least one. DBZ had Solar Flare, as Goku fires one at Vegeta to draw him some time, Spirit Bomb, as Goku attempts to fire one at Vegeta, but Vegeta was fast enough to counter, and Yajirobe, as he, Krillin, and Goku manage to chop off Vegeta’s tail. Kill la Kill brought us Nudist Beach as Aikuro tells Ryuko of the organization that he works for. Naruto had Naruto trend as he gets into a feud with Sora. InuYasha had Naraku trending as he tries to take Kohaku’s shard, but is intervened by Kikyo’s last will. Gurren Lagann had Kamina, as his soul/memory of him helps Simon and co. free themselves from the anti-Spiral’s spell. And for One Piece, Zoro trended as he manages to find the lucky rice ball, but throws it away since it was too hard for him to eat.

This Tuesday will mark 18 years of Toonami’s existence, so what better way to celebrate than by tuning in next week as both Gurren Lagann and Deadman Wonderland both broadcast their respective series finales, which also means that the return of Sword Art Online is just two weeks away. Until then, have a Happy St. Patrick’s day, and stay gold.

NUUUUUDIST BEACH! Only Toonami on [adult swim] on Cartoon Network.