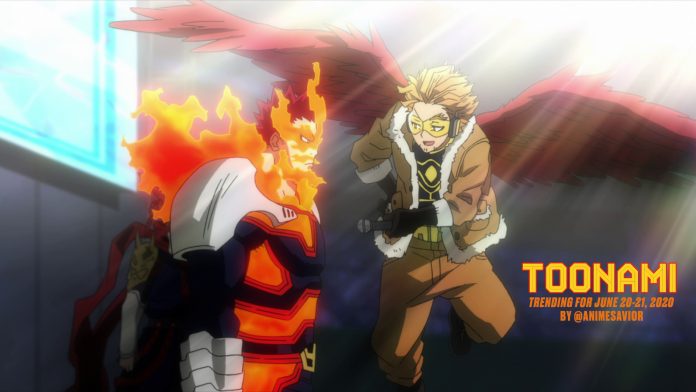 “Look, I’m not an All Might super-fan or anything. I never wanted to become like him. But still, I was completely shocked by his retirement. I’m not suggesting we need another shiny icon like him, but it goes without saying that we could definitely use a new leader right about now.”

The Toonami Trending Rundown for June 20-21, 2020. After a month-long hiatus, fans finally got to see the penultimate episode of My Hero Academia’s fourth season.

Among this week’s highlights, My Hero Academia began the “Pro Hero” arc, as Eri moves into the UA dormitories. Mirio and the students of class 1-A are assigned to take care of her and help her control her quirk. At the same time, with the official release of the latest “Hero Billboard Chart,” Endeavor would officially take the number one hero title for the first time following All Might’s retirement. However, Hawks (the newest number two hero) would remind everyone that Endeavor’s approval ratings aren’t as high as his ranking suggests. Hawks would later ask Endeavor to team up to investigate rumors of further Nomus from the League of Villains continuing to terrorize citizens around Japan. Endeavor was reluctant to help him at first, at least until a Nomu attacked them which would lead to an unusual partnership.

Meanwhile, in Black Clover, Kira gives Asta and Nero/Secre an unfair trial as he threatens their friends and family with retribution if they don’t give in. But the rest of the Black Bulls wouldn’t stand by idly as they came to their defense, even if the entire kingdom would fight against them. As things escalated between the two sides, Fuegoleon and Nozel arrive with an order straight from Julius. The Wizard King requests Asta to investigate the devils from within the kingdom and beyond; to prove his innocence and to warn everyone that more danger is on the way. And in Shippuden, Naruto fights the reincarnation of the third Raikage to help seal the Raikage’s power. Naruto initially has difficulty battling him since our hero has had struggles controlling the Nine-Tails powers. But with the help of Killer Bee, the Eight-Tails, and a little bit of luck, Naruto does manage to take the Raikage down for sealing.

On Tumblr, #Toonami would trend alongside My Hero Academia and #BNHA. Unfortunately, no show made the top 30 trends in the United States on Twitter this week. The full list, including statistics and tweet counts from the Twitter app and Amr Rahmy’s Fan Screening analytics app, can be seen below.

This week’s feature was a new music video titled “Seductive Fantasy” by Sun Ra Arkestra and animated by Chad VanGaalen. You can check it out below.

Funimation on Tuesday debuted a second trailer for the upcoming second season of Fire Force, which you can see below. The new season will begin simulcasting on July 3 on FunimationNow and Crunchyroll.

While COVID-19 has canceled Anime Expo this year, the convention will be hosting virtual panels online branded as “Anime Expo Lite” on YouTube and Twitch. This is an attempt to bring some fanfare during the current pandemic. Funimation and Aniplex will also host separate events concurrently titled “FunimationCon 2020” and “Aniplex Online Fest,” respectively. Maki Terashima-Furuta is hosting a panel for Production IG, and Jason DeMarco will be among the panelists. With both Blade Runner and Uzumaki on the horizon, this panel will be one for Toonami fans to watch. Many expect information regarding both shows and possibly other Production IG titles that could be on the way to the better cartoon show. Other events to watch for include panels for Fire Force, Demon Slayer, My Hero Academia, Sword Art Online, and The Promised Neverland. We’ll have further information in a preview article that will be posted soon.

Looks like I’ll be doing a panel at Anime Expo Lite this year. I’ll have video messages from all my amazing people. I hope you will check it out. 今年もアニメエキスポにてバーチャルパネルやります。観にいらして下さいね。#animeexpolite #july4 https://t.co/SiWzkhYlSg pic.twitter.com/JLmbHa40aq

Since San Diego Comic-Con is canceled this year, Adult Swim will be hosting an online convention titled the “Adult Swim Con”. Among the featured events, Toonami will be hosting a panel on Saturday that will include new interviews regarding Blade Runner, Uzumaki, as well as information about upcoming show announcements. According to Jason DeMarco, “shorter versions of the pieces will air during the night on Toonami, and the longer versions will be on the site.”

#Toonami fans, since we won’t have a real Comic-Con this year, @adultswim are having our own con! And on Saturday Night, Toonami will be featuring interviews and info about Blade Runner: Black Lotus, Uzumaki, and some upcoming show announcements. Tune in, it will be a fun night! pic.twitter.com/axufYusjct

Finally, with My Hero Academia’s season finale airing this Saturday, and with no new programming forthcoming due to COVID-19, Toonami will be airing reruns of  Dragon Ball Super (DBS) to lead the block at the start of the Universe Survival Saga (Episode 77) beginning on July 11. And for the Fourth of July weekend, Toonami will air episodes 60-67 of DBS from midnight to 4 a.m.

Make sure to tune in next week for the season finale of My Hero Academia, among other great moments. Until next week, stay safe, visit blacklivesmatters.carrd.co to see what you can do to help the fight against social inequality, and make sure you do your part to stop the spread of COVID-19 and to protect others by following your local health advisories. Stay at home unless you need to, practice social distancing by staying six feet/two meters away from one another if all possible, and wash your hands thoroughly for at least 20 seconds.

Did you enjoy this week’s Toonami? Let us know by commenting below or directly on our social media. And be sure to follow us on @ToonamiNews and subscribe to our podcast on Soundcloud for future content and breaking news updates. This week, C.J. and Sketch met with John Gremillion to talk about his role voicing Gentle Criminal in this season’s My Hero Academia. Check it out in the player below.