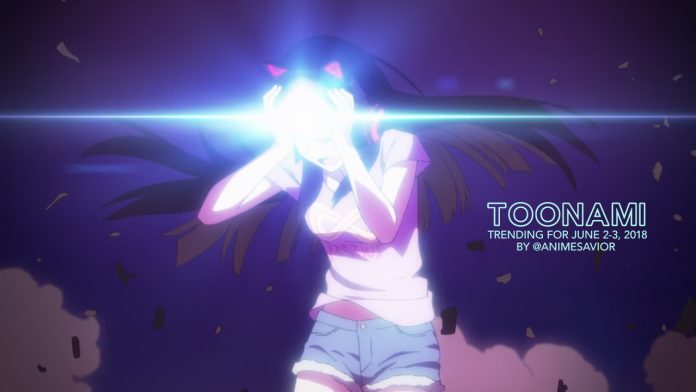 “The world must be destroyed before it can become beautiful. This is the world I envisioned. This is how the world should be. But in this world, only my body is rotting, becoming decayed. Yes, decaying. Maybe this is how my body should have been. Maybe this is my true self. But then finally, I remember that I’m still only a junior high student, that I wasn’t thinking about anything, and that nothing amazing has ever happened here. Everything is ordinary.”

The Toonami Trending Rundown for June 2-3, 2018. After a nearly 17 year hiatus since the original series was completed in Japan, FLCL is back with its rather unique take on the coming of age story, so to speak, this time following the story of Hidomi and Ide. Meanwhile, Black and Zamasu merge in their attempt to stop Goku, Vegeta and Trunks in stopping their “divine justice” efforts, while we see the climatic finale of Goku’s battle with Buu, and Deku and Ochaco take the UA entrance exam, among other great moments.

To kick off FLCL Progressive’s run on a good note, on Twitter, Toonami would successfully trend in the US along with #FLCL and #FLCL2. Meanwhile on Tumblr, Toonami trended alongside Boku no Hero Academia and FLCL.

If you missed the premiere on Saturday or you just want to see it again, Adult Swim will make every episode available for free as they air on adultswim.com and on-demand services. Episodes are also available for purchase on the Apple iTunes store, the Google Play store, and the Microsoft store, with each episode costing $2.99 and the season pass for $14.99.

During the commercial break for FLCL, Toonami showcased an animated short by Adult Swim and Production IG titled The Pacalien, created by Toshiko Hata and starring Takumi Saitoh. You can check it out below.

To commemorate the upcoming season of Attack on Titan premiering in Japan on July 22, Funimation will be presenting a limited theatrical run of the season 2 recap film Roar of Awaking, which will follow with a bonus World Premiere showcase of the first episode of Season 3. These limited screenings will take place in select theaters on Tuesday, July 10 for the subtitled version & Wednesday, July 11 for the dub. For those interested, check out funimationfilms.com/attackontitan for tickets and more information.

FunimationFilms will be hosting the #AttackOnTitan Season 2 recap movie with the world premiere of Season 3 episode 1 in a special theatrical event this July! 📽️

Finally, some unfortunate news for those who wanted to view the subtitled version of FLCL, as due to issues we’re not privy to, by request of Toho (who is responsible for distributing the new series in Japan), the release of the Japanese versions of #FLCL 2 and 3 will be delayed to November, the same time the series will be released in Japan. All episodes will be posted on Adult Swim’s streaming site then.

Ever since its debut on Adult Swim in 2003, FLCL has been widely praised with its unique story, superb art style, and its enjoyability to this day, among many other things. And with the debut of this sequel, no doubt Production IG and Toonami have a lot of shoes to fill. What mysteries and craziness will we see in Hidomi and Ide’s story in the next 5 weeks, as well as Kana and co.’s story to come? No doubt it will be pretty exciting to see how well this goes…or we’ll just be confused like we all were when we saw the original 6 episodes back in the day.

We’ll see you again next week as always, but I’d like to take the opportunity to say that Saturday was the birthday of yours truly. I’d like to give a huge thank you to Jason, Steve, Dana, and everyone at Cartoon Network who are doing their part to rebuild the better cartoon show as well as those that watch, record, and live tweet and blog this great block and showing that hope springs eternal for the anime industry. And of course, I do want to thank you all for continuing to read this trending rundowns every week. No doubt that Toonami is the gift that keeps on giving.

Special thanks to @Journeyman15, @MisterADRaveN, @myanimewaifu, and others I forgot to mention for spotting some of the trends on this list. Also special thanks to @JPReckless2444 for the updated graphics and fonts.