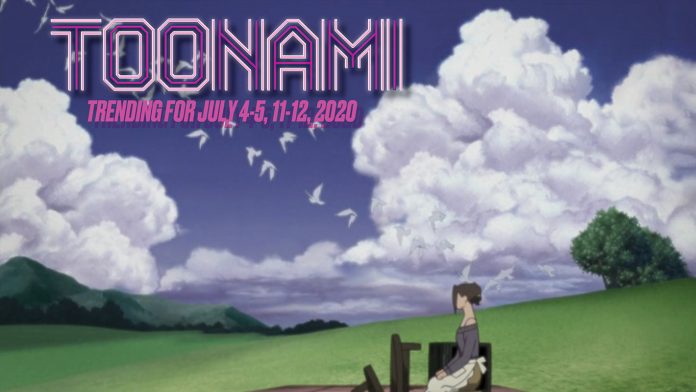 The Independence Day holiday and the conclusion of My Hero Academia’s fourth season brought changes to the Toonami lineup over the past two weeks. First, a marathon of Dragon Ball Super aired on the block from midnight to 4 a.m. featuring episodes from the Future Trunks Saga, as part of the holiday celebration. The following week, Super returned once again to lead the block in My Hero Academia’s place. To everyone’s surprise, Samurai Jack followed Naruto: Shippuden in the lineup and quietly indicated that the block had expanded.

On July 11-12, #Toonami, #DragonBallSuper, and #ParanoiaAgent trended in the U.S. on Twitter during the east coast run time. No trending data is available for July 4-5.

As mentioned previously, Toonami added Samurai Jack to the weekend lineup without making an official announcement on their social media accounts. Jack is slated to run at 3:30 a.m., expanding the block by a half hour. At the time of writing this article, there is still no official announcement regarding the expansion or whether it will be permanent. We will keep you updated as we learn more information.

The official Twitter account for the Uzumaki anime introduced the first member of the Japanese cast, Uki Satake, as the voice of Kirie Goshima, the high school student protagonist who lives in the City of Spirals.

A new music video aired on July 4 during the Dragon Ball Super marathon, titled “Rampage” and set to “Rhythm of the Gravity” by !!!.

The marathon kicks off when Future Trunks returns to his timeline with Goku, Vegeta, and Bulma. Peace doesn’t last for long before Zamasu and Goku Black appear, starting a fight between Black and Vegeta. Goku Black reveals that he is actually Zamasu from the original timeline, who took over Goku’s body in the future and teamed up with Future Zamasu to destroy all humanity. Goku unleashes an anger-fueled attack upon Zamasu and Goku Black, but he is quickly subdued. Despite the less than favorable odds, Trunks distracts Zamasu and Black while Vegeta, Bulma, and Goku escape back to their timeline.

The trio from the present timeline return to face off against Zamasu and Goku Black once again with hope that the Evil Containment Wave technique can put an end to Goku Black and Zamasu’s reign. Vegeta and Goku attempt to win the fight all seem hopeless, but at the last second, Bulma distracts Future Zamasu while Trunks quickly learns the Evil Containment Wave technique himself. He uses the technique on Future Zamasu, capturing him inside the urn until he manages to break free and fuse with Goku Black using their potara earrings. Goku, Vegeta, and Trunks fight Fused Zamasu with all their might, drawing upon their strength to hit him with everything they’ve got. Desperate to find a spot of weakness, Vegeta and Goku fuse with potara earrings into Vegito, activate Super Saiyan Blue mode, and attack Fused Zamasu until they defuse. During all the action, Future Trunks was able to use his sword to cleave Fused Zamasu to defeat the powerful adversary. Future Zeno is summoned by Goku to erase Zamasu from the world, but ultimately leads to erasing the whole world since it was under the influence of Zamasu’s negative energy.

On July 11, Dragon Ball Super led the block with Goku clamoring to return to training after getting a job at Chi-Chi’s insistence. He travels to Beerus’ world, where he manages to convince the Zenos to host a multi-universe martial arts tournament. Meanwhile, Vegeta and Bulma are expecting their second child to be born any day. Inspector Ikari returns in Paranoia Agent, starting a new job as a security guard while coping with the loss of his police career. His wife, Misae, encounters Li’l Slugger in their home when she despairs over her ailing health. As she wavers in her desire to die, Li’l Slugger becomes larger and more aggressive, until Misae finally admonishes him as merely an illusion, forcing Li’l Slugger to disappear. In Mob Psycho 100, Teru and Shigeo team up to rescue Ritsu and the other young ESPers taken hostage by members of an ESPer terrorist organization known as Claw. Black Clover’s Secre reminisces about her days sealed as the bird Nero after the disappearance of the Wizard King Lumiere. She reveals that she had been observing Asta and Yuno, and their journey to become the next Wizard King since they were young children. Gaz Digzy’s attempt to get fit and adopt a healthy lifestyle goes awry in Ballmastrz: 9009 as she and Babyball wager that she stays sober in the days leading up to their match unless she wants to end up as his personal servant for a whole month! Then the Leptons face off against Gaz’s old team, the Boom Boom Boys, in the final match of the season. Naruto: Shippuden is a blast from the past when the Sound Four are resurrected and face off against Choji, Shikamaru, Kiba, and Neji, who fought the Otogakure ninjas years before as young chuunin.

As always, do your part to prevent the spread of COVID-19 by following advisories from your local health authorities, practicing social distancing, not touching your face, washing your hands for at least 20 seconds, and wearing a mask whenever possible. Don’t have one yet? Grab a Toonami Faithful mask. Proceeds from the masks go to funding the website and the podcast. Until next week, stay safe and stay gold.

Did you enjoy this week’s Toonami? Let us know by commenting below or directly on our social media. Be sure to follow us on @ToonamiNews on Twitter, and @ToonamiFaithful on Facebook and Instagram. You can listen to the Toonami Faithful podcast on Soundcloud, iTunes, or Spotify for interviews, discussions, and breaking news updates. This week, Sketch and VLord are joined by Duelist and Kuro to discuss Lupin the 3rd: Part 5. Listen at the link below or on your podcast platform of choice: