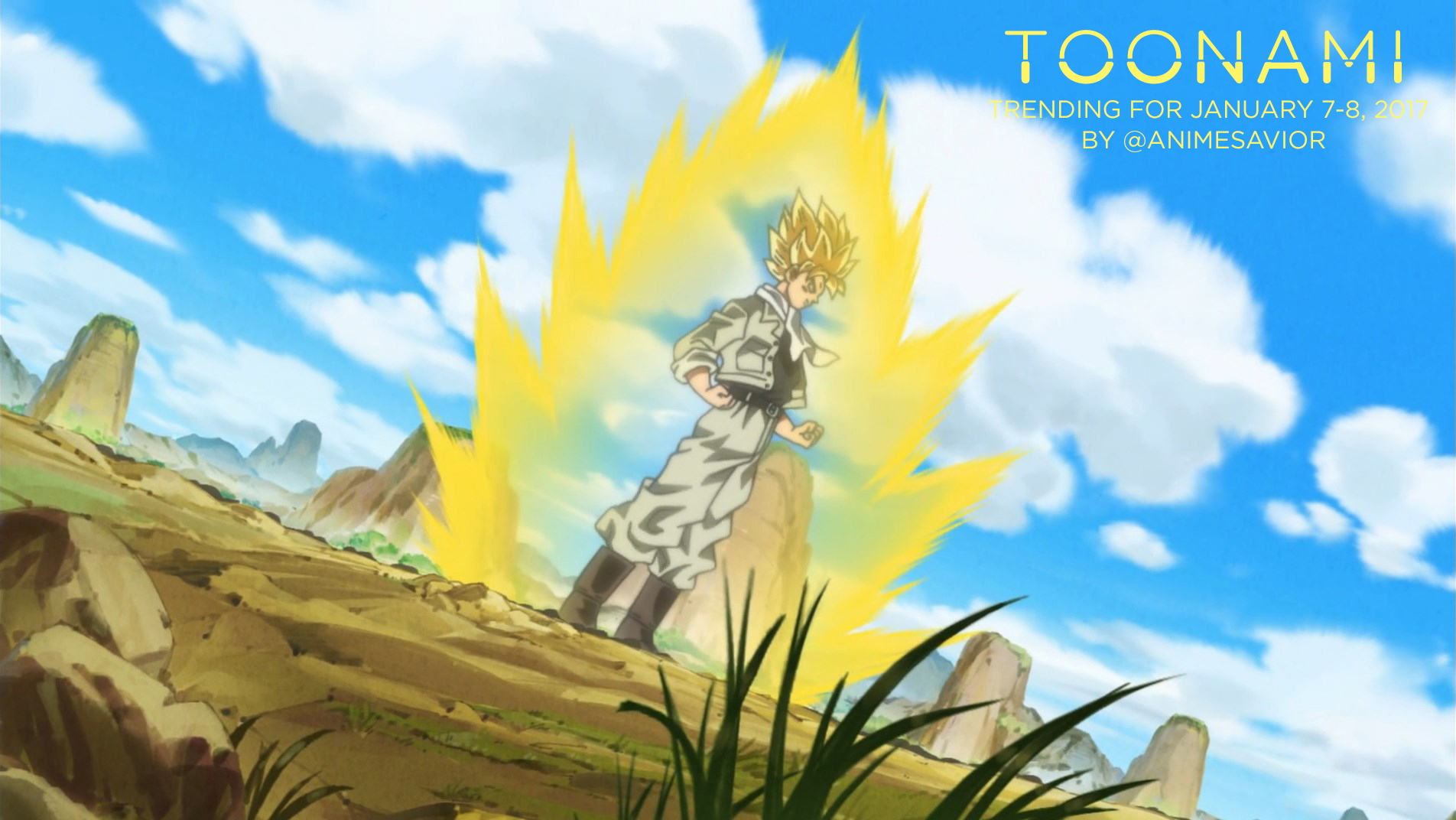 “Majin Buu was ridiculously strong, there’s no way I could’ve stopped him on my own. And you never know, one day someone even stronger can show up. So I’ve got to keep training, to keep you guys safe.”

“Toonami and Dragon Ball. We go together like peanut butter and jelly.”

The Toonami Trending Rundown for January 7-8, 2017. We kick 2017 off with a bang with the long awaited premieres of Dragon Ball Super and DBZ Kai’s Buu Saga in addition to the TV premiere of Gundam Unicorn. And what a night it was. As a result, Toonami and every show save for One Punch Man successfully trended in the US during their respective East Coast airings, in addition to Dragon Ball Super and JoJo’s trending during the West Coast airing.

And in the case of #DragonBallSuper, saying that it trended might be an understatement, as the show began trending in the US during the primetime airing at 8, and quickly going up to the #1 spot in the US trends, and continuing to trend through the Toonami airing at 11:30 (and all this despite the buzz of the first day of the NFL Playoffs going on at the same time), in addition to even trending worldwide briefly.

DBZ’s buzz would also create a character trend in Gohan as on Super, Gohan gets married to Videl, so Goten and Trunks look for a wedding present for them, while on DBZ Kai, Gohan enrolls to High School in Satan City, but on his way he stops a bank robbery. Though going Super Saiyan sealed his identity somewhat, the news about the “Golden Fighter” stopping crimes around the city ever since Gohan’s arrival and his early struggles in fitting in has made Videl very suspicious.

Finally, Dragon Ball Super’s buzz was enough to make Nielsen Social’s daily top five most talked about shows on Facebook and Twitter on that day, making it to #1 for the very first time. This is also the 8th time we’ve seen this occur for a Toonami show, the first time this has occurred outside of summer, and the first time this has happened since Facebook was integrated into their analytics. Overall, it’s definitely a great start, especially for a show that’s been long awaited in Dragon Ball Super, and here’s to many more weeks like this going forward.

This upcoming March will mark Toonami’s 20th anniversary, and among other things, Toonami will be showcasing the Production IG microseries, Sand Whale and Me. Directed by Mamoru Oshii of Ghost in the Shell fame, the microseries is a 25-minute, 5-part short film, with each part to be shown weekly beginning on March 18th. In addition, Toonami is looking into having a throwback look for the month of March, with 4 options from four different eras during Toonami’s original run. The options can be seen below, and if you wish to cast your vote, comment on their Facebook post here. Several Toonami shows will be making it onto the silver screen over the next few months, including One Piece Film Gold, which premiered in select theaters on Tuesday, with showtimes going through the 17th. If you’re interested and a showing is available near where you live, go check it out and give your support to the anime industry on the big screen.

Likewise for Ordinal Scale, as Aniplex is beginning to sell tickets for the upcoming film, which is set to be released in select theaters on March 9, 2017. Click here to check your local theaters for showtimes and tickets.

Those keeping up with simulcasts might know that on Friday, the season 2 premiere of Blue Exorcist premiered in Japan. The first season had a successful run on the better cartoon show back in 2014, and we could see this as a potential candidate to make it’s return when the show’s dub is produced in the months ahead. We’ll keep an eye on any further developments, but in the meantime if you want to check out the new season now, new episodes are available to watch legally at Crunchyroll and Daisuki. A little quick note for those planning to watch: since the last 8 episodes of Blue Exorcist season 1 considerably diverged from the manga, the new season ignores those events, so for those wishing to restart from episode 1, you only need to watch the first 17 episodes (or the first 4 volumes of the manga) to get caught up.

Finally, no word on Samurai Jack as of yet, though in preparation of the upcoming season, Adult Swim will rerun Samurai Jack episodes starting next week at 8:30pm Eastern, following the Dragon Ball Super prime time premiere.

2016 sure was a memorable one for the block, with the successful airing of Intruder 3, as well as the successes of all the great shows to have aired on the block in the past year. We revisited an old classic in Samurai Champloo as well as saw some new experimentation with the broadcast dub of Dimension W. We saw that good things indeed come to those who wait when the Gundam franchise made its grand return for the first time 12 years with Iron Blooded Orphans, and after many years of waiting, both Hunter x Hunter and JoJo’s Bizarre Adventure respectively got over the hump to finally air on the better cartoon show. We saw that nothing is really impossible with the airing of Children Who Chase Lost Voices, which gives a glimmer of hope for the future prospects of movies on the block. And the success of One Punch Man among others continue to remind us of the potential of how big and great anime can be and that more great things may still be to come.

And with the successful premieres of Dragon Ball Super, the Buu Saga, and Gundam Unicorn, 2017 is off to a great start. Super finally got it’s English Dub and Toonami debut after a year and a half wait since the series started airing in Japan, bringing in the first new Dragon Ball series to US shores in since Dragon Ball GT aired on Toonami 11 years ago (movies and Kai aside). The Final Chapters meanwhile brings DBZ Kai’s Majin Buu arc to US shores, something long awaited since Toonami brought back DBZ in 2014, and even longer for those who watched Kai from the get-go when it originally aired on Nicktoons and the Kai DVDs. And the Gundam franchise now has it’s second title since Toonami’s revival in Unicorn, the newest addition to the Universal Century timeline and a title well requested since the original OVAs were being produced earlier in the decade, which has been converted into a 22 episode TV series for broadcast.

The new year always brings new beginnings, and we have some pretty exciting times ahead as the block reaches its 20th anniversary, with new shows and other surprises yet to come, in addition to the current arsenal of shows. And with Toonami back on the air for almost 5 years now and anime going back on the upswing, things are looking up and there’s plenty of anticipation to see what’s next in the year ahead. But of course keep watching as always and help keep those ratings and overall buzz up so we can keep this train going for years to come.

Until next week, congratulations to Clemson on winning the National Championship, and stay gold.

Special thanks to @brezerkfury, @JMB_70056, @myanimewaifu, @TheNextHokage and others I forgot to mention for spotting some of the trends on this list.