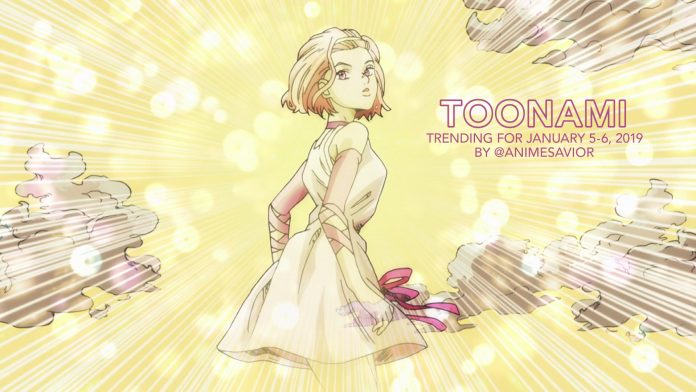 “I’m afraid this is as far as we go…we’ll at least until he’s caught. When that finally happens, Arnold and I will look back, and we’ll be reunited with Mon and Dad. Peace and Dignity must return to Morioh. Only then can we find eternal rest. I’ll be right here if you ever want to talk about anything. You two don’t be strangers, okay? I’m here if you need me, Little Rohan, Mr. Koichi. From the bottom of my heart, I want to thank you for listening to my story”

The Toonami Trending Rundown for January 5-6, 2019. It’s the first Toonami of the New Year as Rohan takes Koichi to his old neighborhood and runs into Reimi, while Palm is reborn as a Chimera Ant, and Black Clover begins the Witches Forest arc, among other great moments.

This week’s feature was a game review of Super Smash Bros. Ultimate for the Nintendo Switch. It received a 9 out of 10 score.

In addition, Toonami also premiered the newest trailer for the highly anticipated Dragon Ball Super: Broly film, set to premiere in select theaters on January 16. To get you information on what to forward to in the upcoming film, I have been releasing interviews with the cast when I was at the premiere incrementally with Ian Sinclair and Monica Rial, already been released. The remaining interviews with Sonny Strait and Sean Schemmel, Chris Sabat, and Vic Mignogna should be released within the next week.

Those who have seen Mob Psycho season 1 before may know that the second season is now underway in Japan and on Crunchyroll and Funimation Now. In a first for Crunchyroll since splitting up with Funimation, they have also announced that they will be simuldubbing the new season, with a release date to be announced. While it has been announced that the dub will be on both Crunchyroll and Funimation Now as well, it is still unknown at this point if Toonami will be renewing the series as well despite that we’re only 4 episodes away from reaching that point. We’ll keep you posted on what happens ahead.

Tune in next week as Black Clover begins season 2 among other great moments. Until next week, congratulations to Clemson on winning the National Championship, and stay gold. Knuckle Up. Only Toonami on [adult swim] on Cartoon Network.