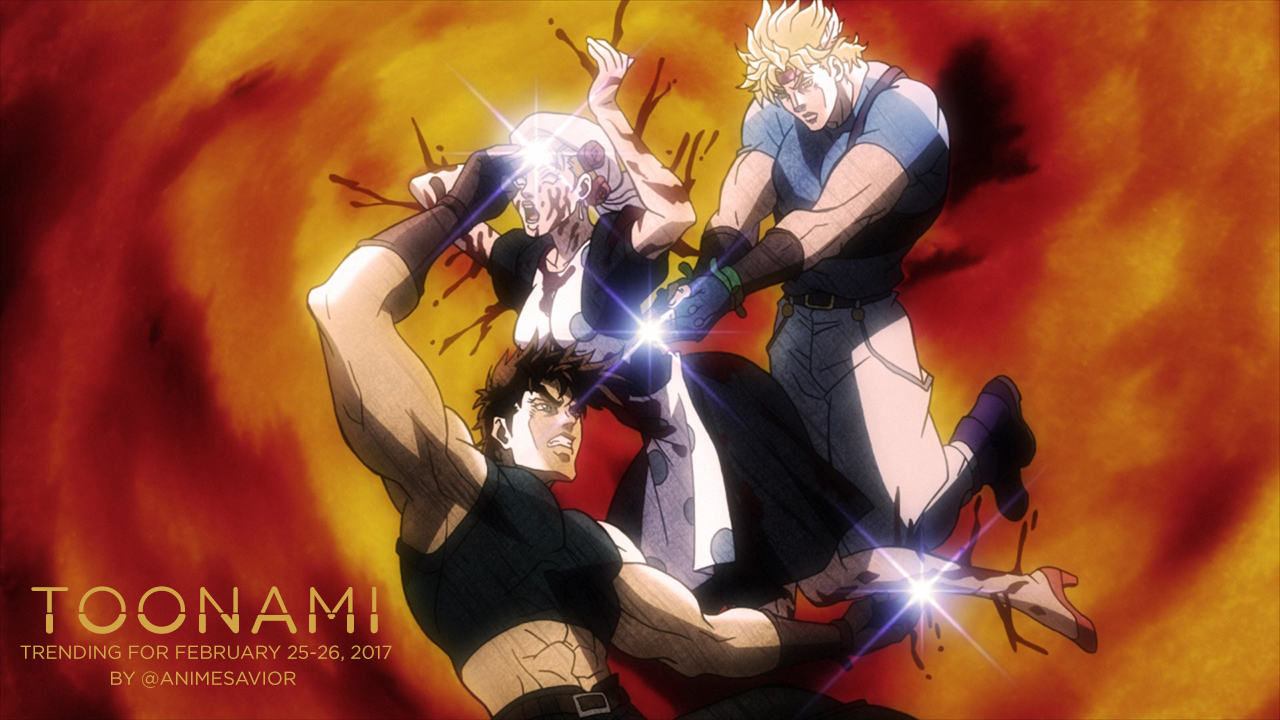 “I’ve fought against him, so I understand. You see, he gave all he had, and even threw away all his pride because he felt a duty to get the stone for his allies. For thousand of years, he did as he pleased, and he lived his life to it’s fullest. Whether it was good or evil, I respect his life and how he chose to live it.”

The Toonami Trending Rundown for February 25-26, 2017. Things are looking pretty good as JoJo and Caesar exorcise Esidisi from Suzi Q while Oolong loses a rock-paper-scissors game with Beerus, dooming the Earth until Goku intervened, and Brook joins the Strawhats as the Thriller Bark story arc comes to it’s conclusion, among other great moments.

On Twitter, Toonami and every show would successfully trend in the US during their respective East Coast airings for the 8th week in a row, in addition to DBZ Kai, Hunter x Hunter, and One Piece trending in the US during or after their respective West Coast airings. All shows would also reach the worldwide trends for the third week in a row. And during the primetime presentation, both Dragon Ball Super and Samurai Jack would also trend in the US. On the other hand, there were no character or in-show content trends to report this week. Meanwhile on tumblr, Toonami, Dragon Ball Super, and JoJo’s Bizarre Adventure also successfully made the trends list.

Finally, Dragon Ball Super would once again make it to Nielsen Social’s top 5 most talked about shows of the day on Twitter and Facebook, making it to the #2 spot. This is the 14th time a Toonami show has made it onto the list since we started recording this feat, and the 7th time in 8 weeks Super has done so.

This week, as part of an advertisement with Sony, Toonami showcased a few previews for the upcoming game No Mans Sky for the PlayStation 4. The game is set for release on Tuesday.

Exciting times for the better cartoon show are ahead as only two weeks remain until the long awaited premiere of Samurai Jack season 5 is set to air. In the meantime, tune in next week as One Piece begins the Spa Island Arc, among other great moments. We’ll see you again next week as always, and if you’re getting a Nintendo Switch on Friday or in the near future, hope you enjoy it and here’s to another great era of gaming to come.