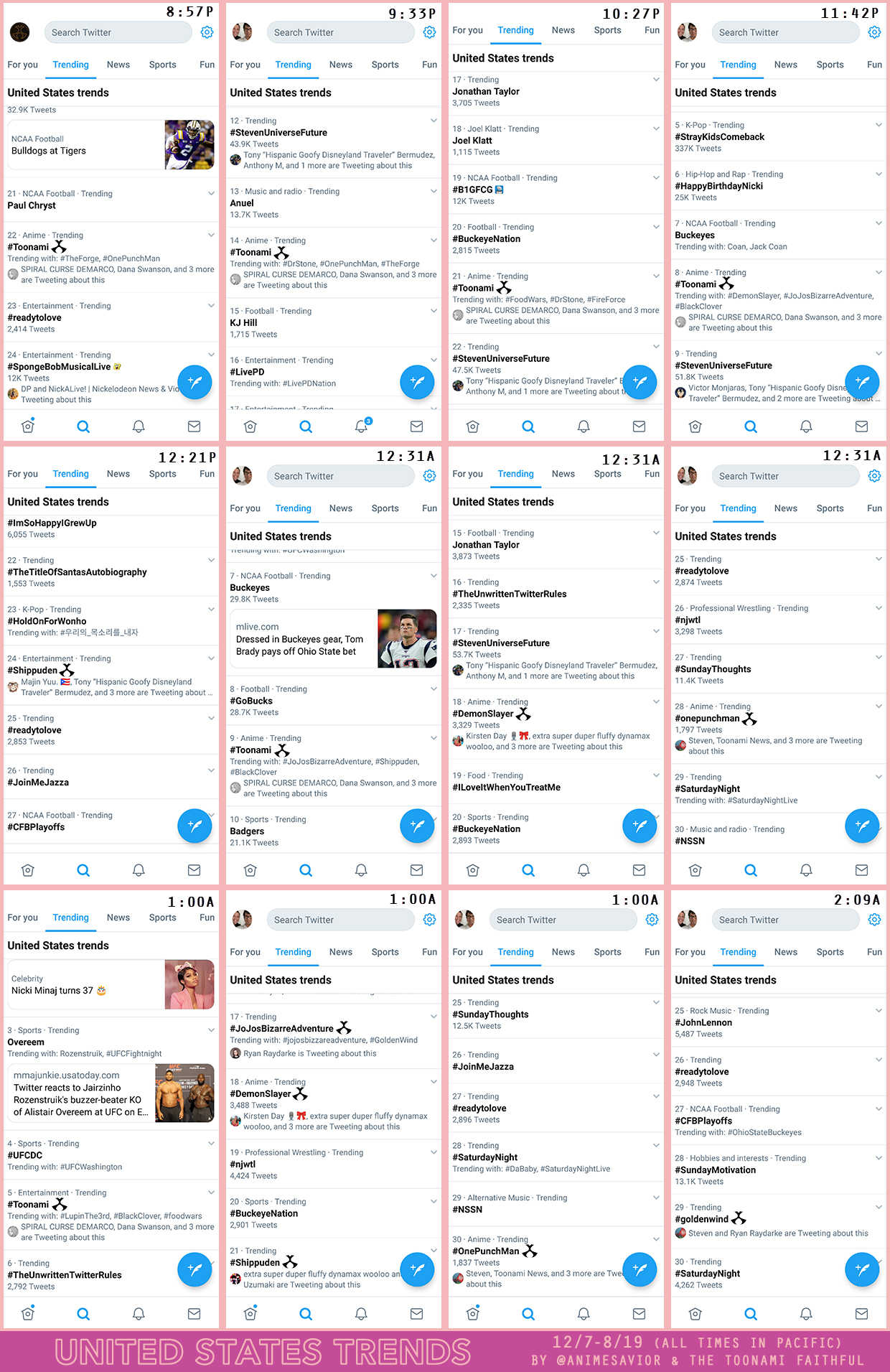 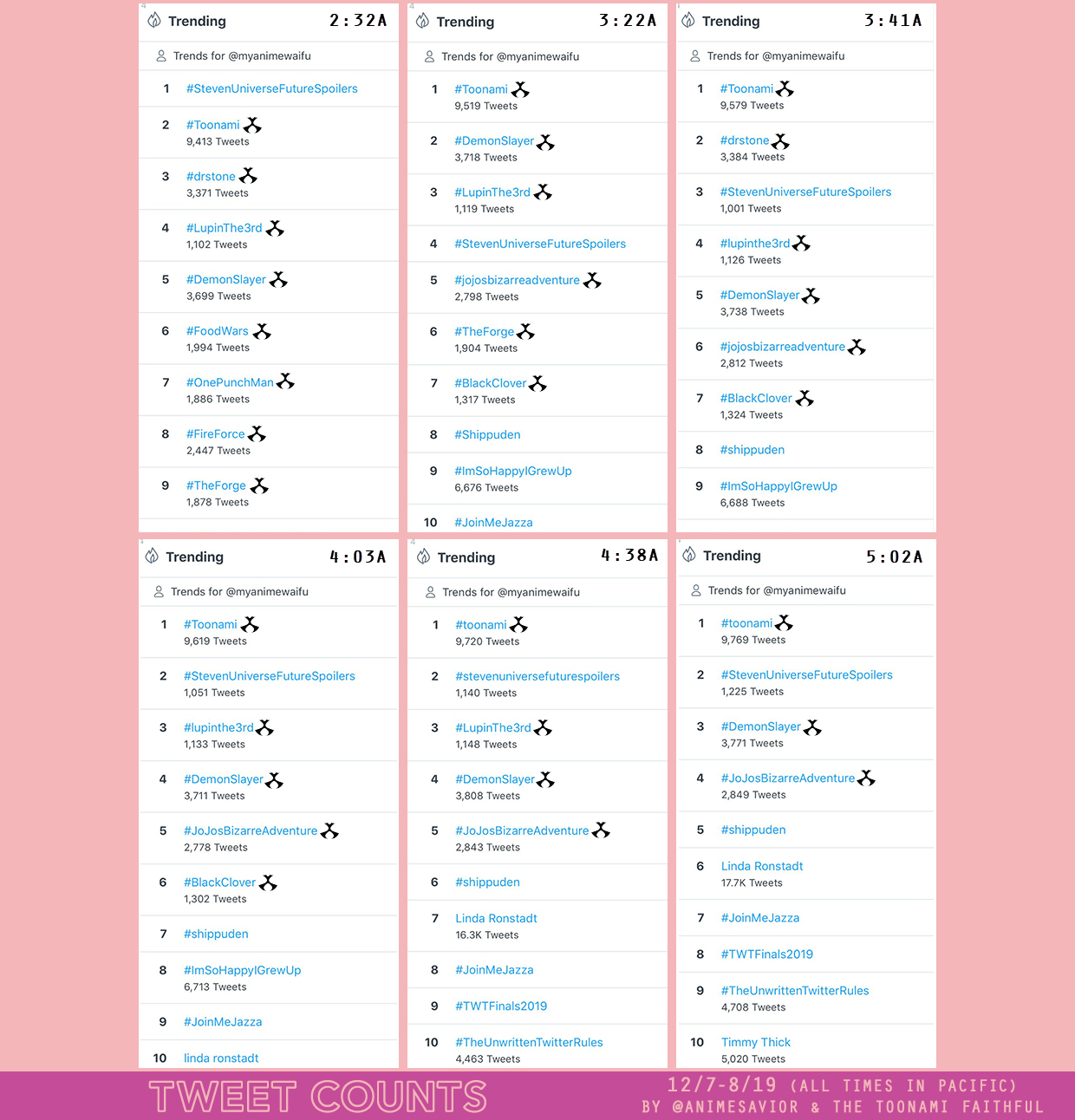 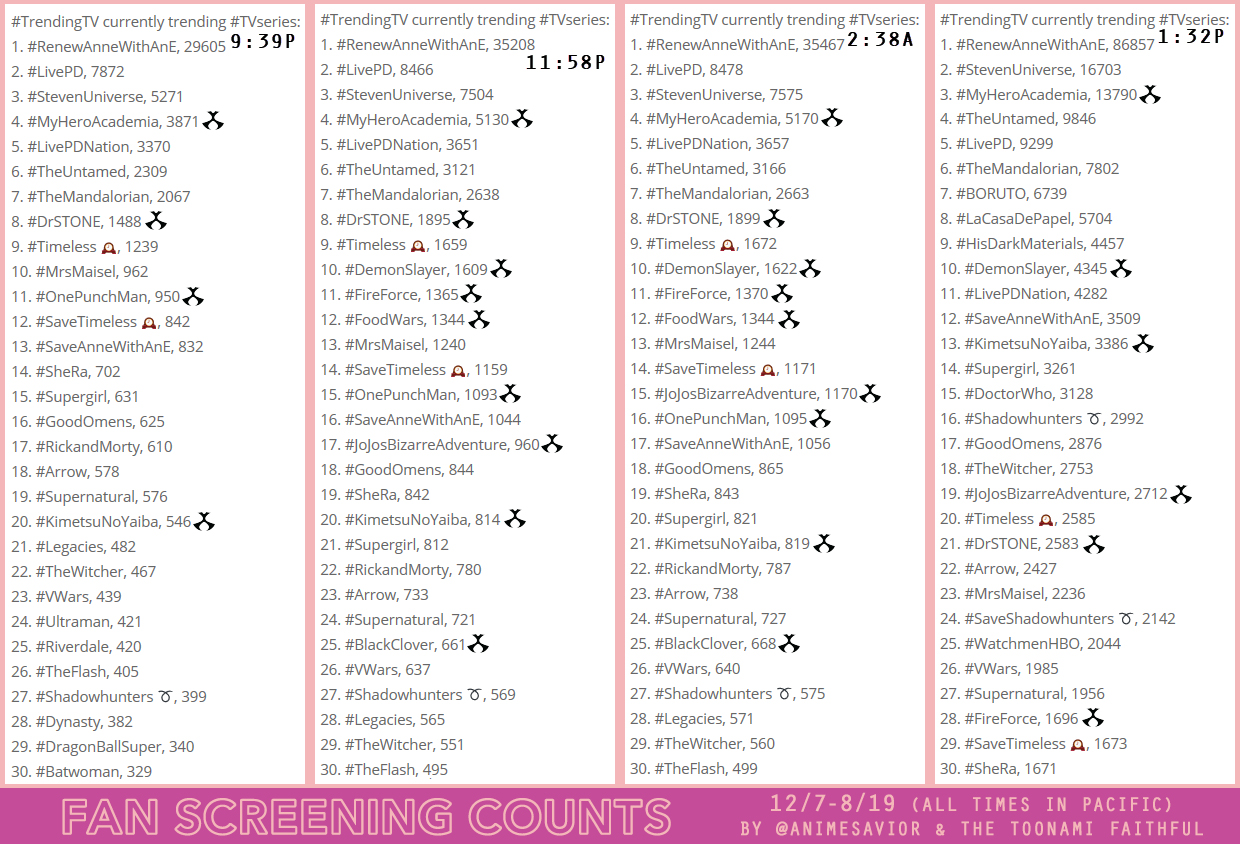 “There’s always some kind of medicine or Aid no matter the wound or ailment. I don’t know how to turn a demon back into a human yet, but there must be a way and I promise we are going to find it. We are dedicated to establishing such a treatment. […] Nezuko’s condition is extremely rare, perhaps entirely unique. I understand she was asleep for two straight years. I believe her body changed during that time. In most cases, that long without food, neither human flesh, nor even the blood of some kind of animal, any demon would undoubtedly grow violent. However against all odds, Nezuko is showing none of those signs. That Miracle could be the key to finding a solution. ”

The Toonami Trending Rundown for Dec. 7-8, 2019. As the TOM 6 era begins, the fifth part of Lupin the Third reaches its dramatic conclusion. Among the many memorable moments from the night, in Dr. Stone, we see Senku win the tournament to be Ruri’s husband and the new chief of the village by defeating Ginro in the semi-finals and Chrome being too exhausted from his battle against Magma to get up for the final. Senku, however, refused to marry the young girl and instead gave Ruri the medicine he developed to heal her sickness. During Demon Slayer, fans see Tanjiro run into Muzan, who has been accused of killing his family and turing Nezuko into a demon. Muzan manages to escape by distracting Tanjiro by turning an innocent bystander into a demon, which forced Tanjiro to subdue the bystander. While Muzan would turn more humans into demons that would have Tanjiro as their target, Tanjiro meets with Tamayo and Yushiro, both who might help find a possible cure for Nezuko. And we witness the finale of Lupin the Third Part V as Lupin uses the outrage of him leaking many of the world’s governmental secrets on DeadSec as a tactic to sneak himself and the gang back to Shake Handz headquarters. There Lupin would free Fujiko from her birdcage, before giving his long-overdue love confession to her.

While Twitter was experiencing some glitches during the first two hours that prevented some users from live-tweeting the block, Toonami fortunately would trend in the United States along with #TheForge and 10 out of the 12 shows. Meanwhile, on Tumblr, Toonami would trend along with #BNHA. The full list, including statistics and tweet counts from the Twitter app and Amr Rahmy’s Fan Screening analytics app, can be seen below.

This week’s feature was the fifth part of The Forge, featuring the debut of TOM 6. You can check it out below.

Bandai Namco revealed a new trailer for the upcoming Sword Art Online game, titled Alicization Lycoris. As the title suggests, the game will be based on the Project Alicization story arc. The game is set to be released on May 22, 2020 on all major platforms with the exception of the Switch.

Don't hold back, Kirito! Give it your all when SWORD ART ONLINE Alicization Lycoris releases on May 22, 2020.

Get immersed in the virtual world "Underworld" set from the SAO Alicization Arc. Pre-Order this JPRG for PS4, Xbox One, or PC today: https://t.co/h2CcMsP12w pic.twitter.com/Vu7PsapKf1

And finally, regarding the holiday break, Toonami just announced that for the New Year’s Marathon on Dec. 28; Toonami will marathon episodes 7-16 of Dr. Stone, followed by that week’s regularly scheduled Attack on Titan to finish off the night. This will follow the marathon of One-Punch Man episodes 13-22 the week before on Dec. 21 for Christmas festivities.

Tune in next week for the final regular scheduled Toonami of 2019, featuring the finale of The Forge, and the Lupin OVA Is Lupin Still Burning? to send off Part V. Until next week, stay gold as always.